Delaware Satisfaction, Release or Cancellation of Mortgage by Individual 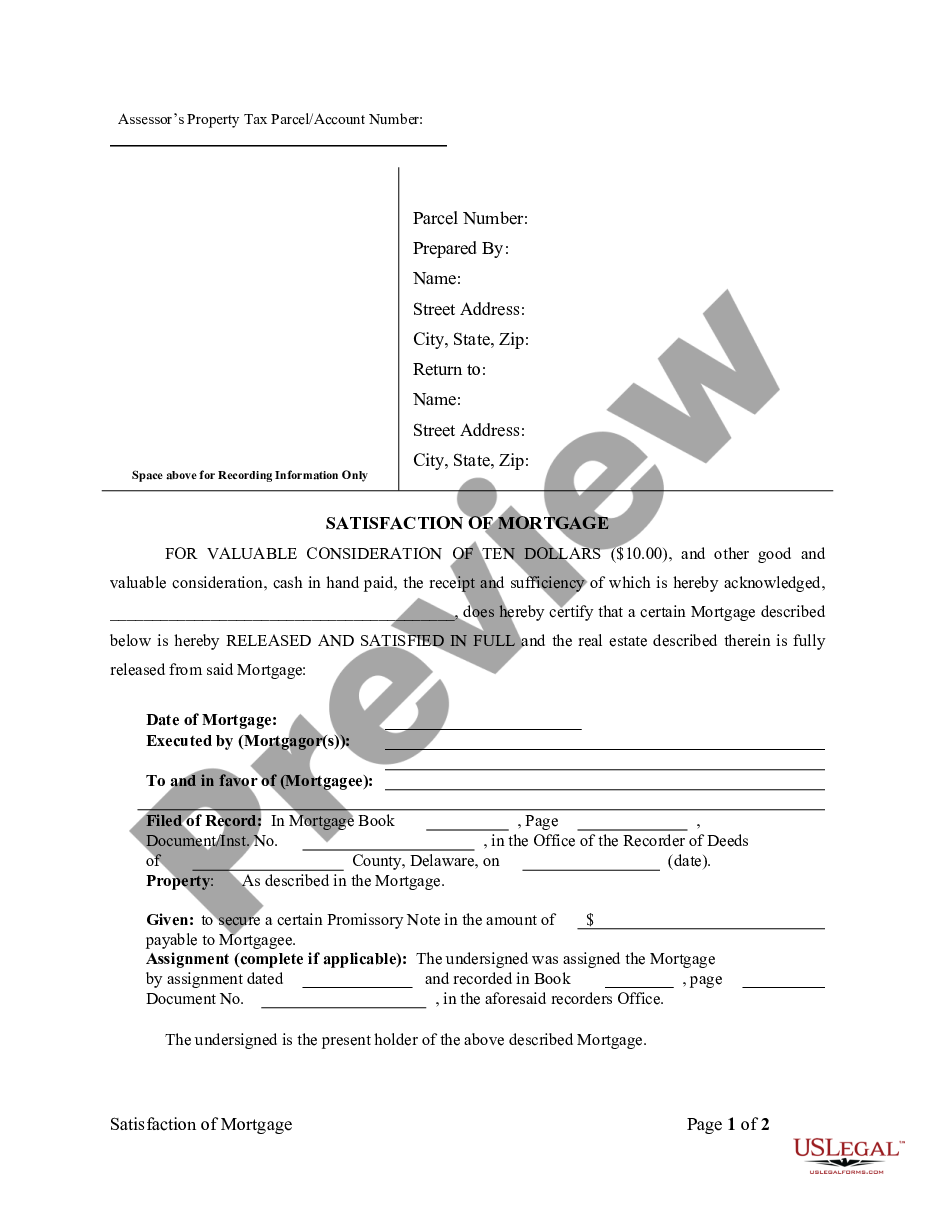 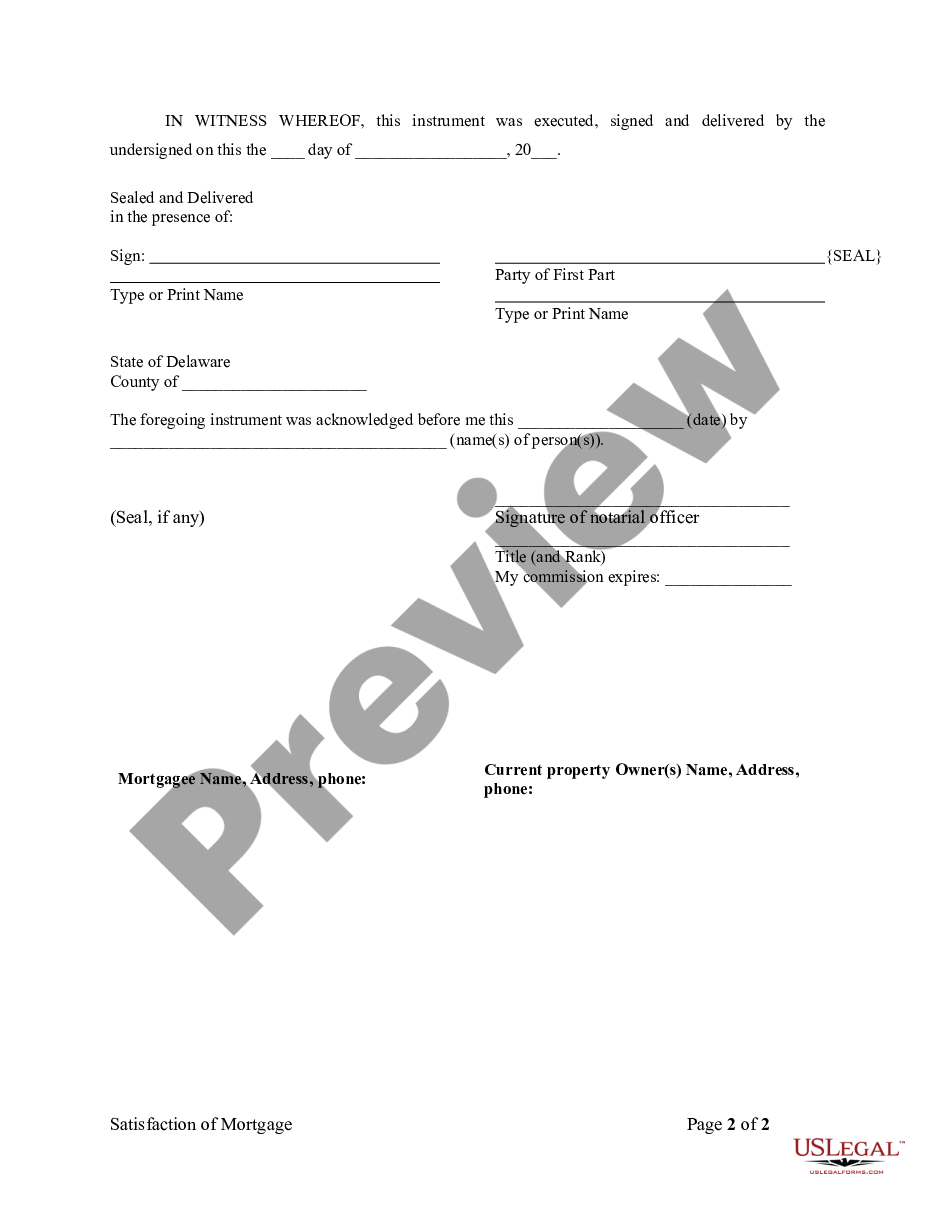 This form is for the satisfaction or release of a mortgage for the state of Delaware by an Individual. This form complies with all state statutory laws and requires signing in front of a notary public. The described real estate is therefore released from the mortgage.
Related Forms

Satisfaction, Release or Cancellation of Mortgage by Individual

An assignment of a mortgage or any sealed instrument attested by 1 creditable witness shall be valid and effectual to convey all the right and interests of the assignor.

(b)All assignments of mortgages or any sealed instruments heretofore made in the presence of 1 witness and all satisfactions made by assignees in such assignments are made good and valid.


To: Recorder of Deeds This instrument prepared by:

This instrument was acknowledged before me on (date) by (Name(s) of person(s).

SIGNATURE AND ACKNOWLEDGEMENT IN A REPRESENTATIVE CAPACITY

(c)Each recorder shall either create and maintain a separate index and record of the recording of documents which are authorized to be recorded by this chapter including, but not limited to, powers of attorney to satisfy mortgages, satisfaction pieces, partial and complete releases of mortgages and security interests or index the same in the index used for recorded mortgages. If the recorder creates a separate index, it may be called the Release and Satisfaction Index, which shall reference the mortgagor, mortgagee, record book and page of the mortgage being released or satisfied and the address or lot number, if any, of the property being released or satisfied. The recorder may also maintain a separate record of said instruments and shall not be required to maintain other than a micrographic or electronic record of said instruments.
(d)If the legal holder of a mortgage fails to satisfy the mortgage in accordance with the requirements of subsection (a) of this section, the mortgagor, or that mortgager' agent, shall be entitled to submit a notice to the legal holder of the mortgage demanding that the mortgage be satisfied. The notice shall be sent by certified or registered mail, return receipt requested. The notice shall be sent to the legal holder of the mortgage at the address designated in the payoff statement, or to such other person and/or address as the legal holder may designate in the payoff statement. If:
(1)No payoff statement is received by the mortgagor or that mortgager' agent; or
(2)No address is provided in the payoff statement and the person issuing the notice has received no address to which to send such notices; or
(3)Payments are made electronically and no payment address is given by the legal holder; or
(4)Payment in satisfaction has been made at maturity or otherwise when due and without a payoff statement having been issued, then the address for notice shall be deemed to be the last address used by the legal holder in written communications with the mortgagor, and the notice shall be sent to the attention of &ldquo;Mortgage Satisfaction Department.&rdquo; A copy of such notice shall also be sent to the registered agent (if any) in the State of Delaware of the legal holder.
(e)Whoever, being the holder of a mortgage, wilfully fails to satisfy a mortgage upon the record as required by subsection (a) of this section shall be fined not more than $1,000 for each such failure together with assessed costs, for each failure, not to exceed $1,000.
(f)The recorder of deeds or the mortgage commissioner of the county in which any mortgage is recorded that has been satisfied or performed shall file a complaint with the Attorney General' office in said county against any mortgage holder who has not satisfied of record said mortgage within 60 days of its satisfaction or performance.
(g)The Superior Court shall have jurisdiction of offenses under this section.


2113 Effect of entry of satisfaction.

2114 Damages for nonentry of satisfaction.

If any person commits a default under § 2111 of this title, such person, that person' executors or administrators, or if it is a corporation, such corporation, in addition to the other penalties provided for shall be liable to the party by or on whose behalf the satisfaction or performance has been made or completed, in damages to be recovered by a civil action. The damages shall not be less than $10 nor more than $500, except when special damage to a larger amount is alleged in the complaint and proved.

2116 Reconveyance upon satisfaction or performance.