Maine Satisfaction, Release or Cancellation of Mortgage by Corporation 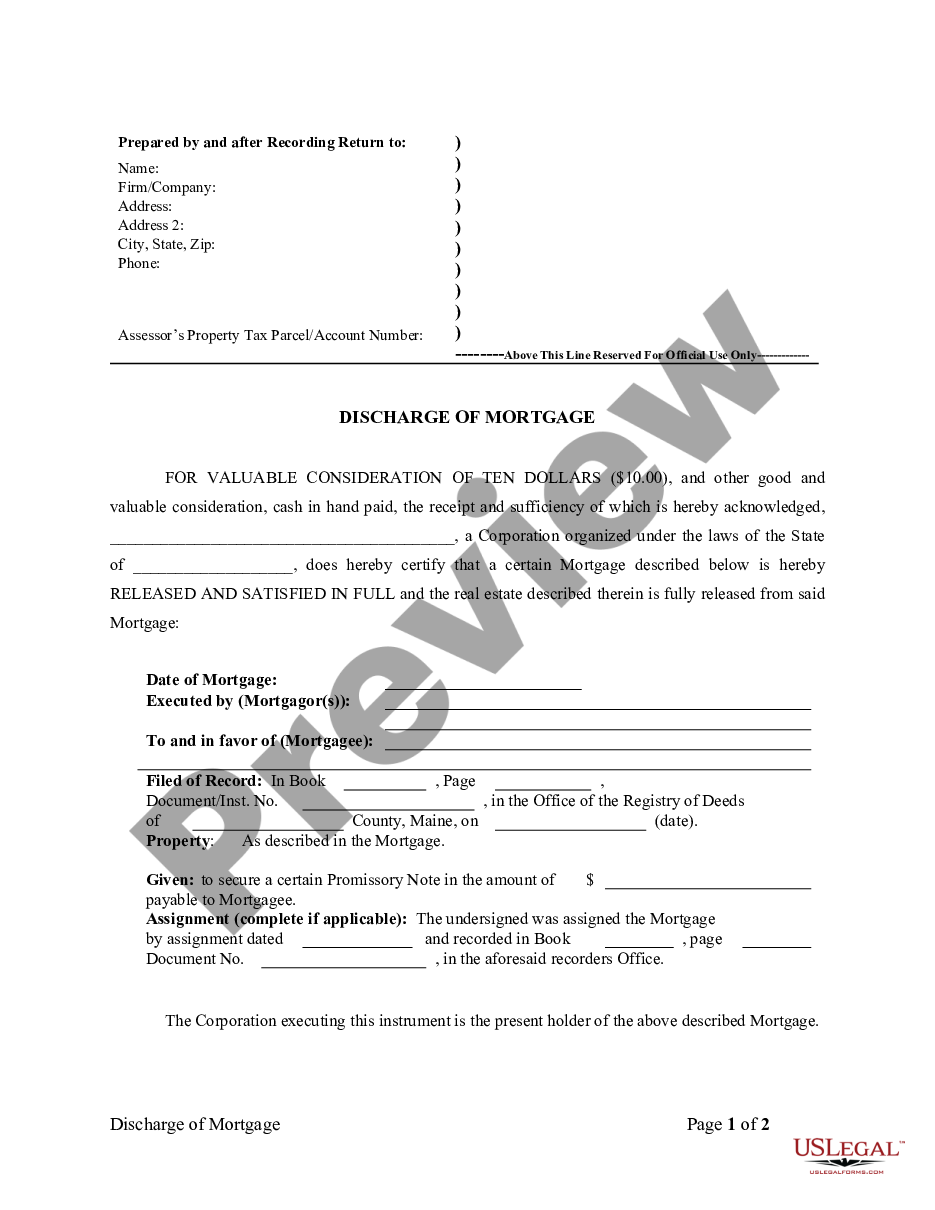 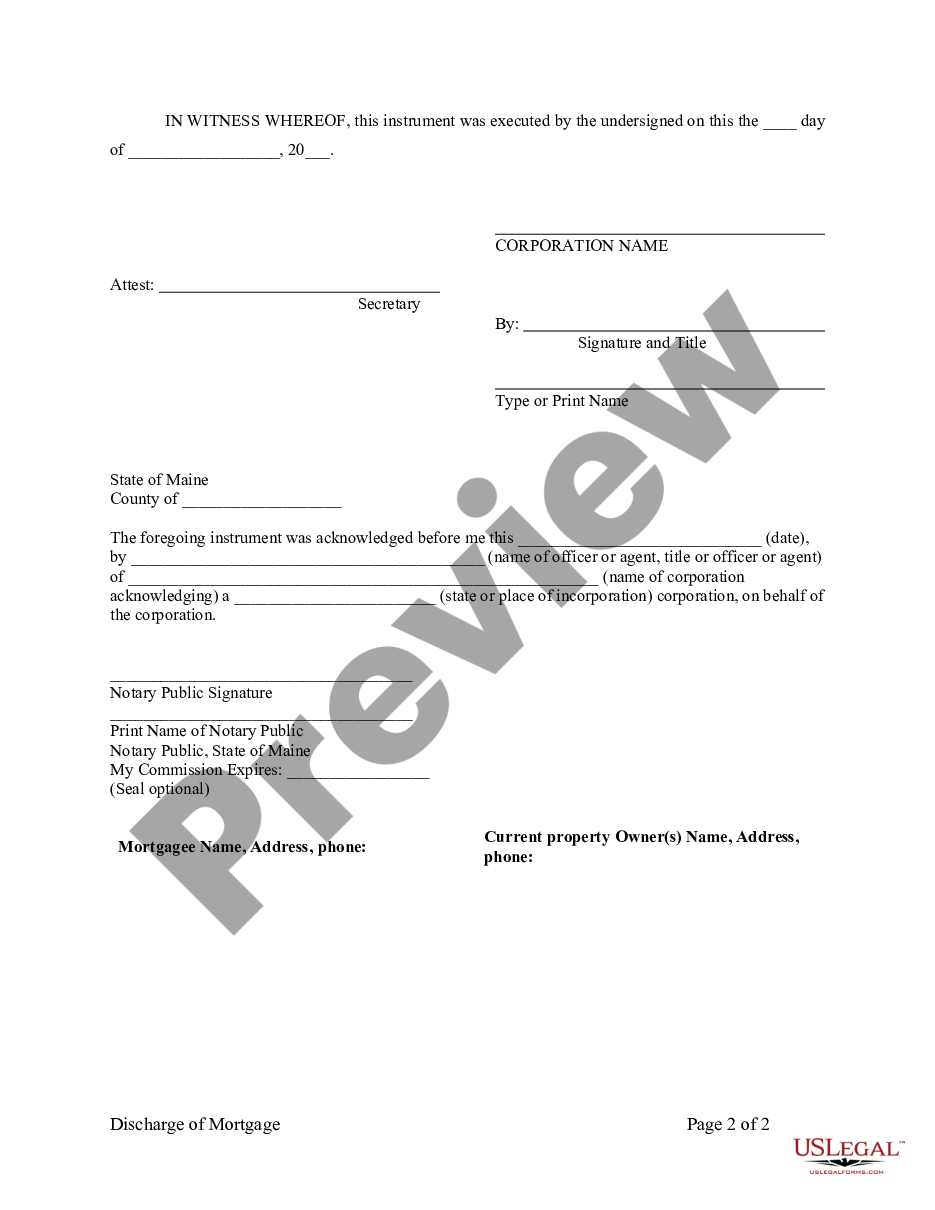 This Release - Satisfaction - Cancellation Deed of Trust - by Corporate Lender is for the satisfaction or release of a mortgage for the state of Maine by a Corporation. This form complies with all state statutory laws and requires signing in front of a notary public. The described real estate is therefore released from the mortgage.

How To Fill Out Maine Satisfaction, Release Or Cancellation Of Mortgage By Corporation?

Have any template from 85,000 legal documents including Maine Satisfaction, Release or Cancellation of Mortgage by Corporation on-line with US Legal Forms. Every template is drafted and updated by state-accredited attorneys.

If you have not subscribed yet, follow the tips listed below:

With US Legal Forms, you’ll always have instant access to the right downloadable sample. The platform gives you access to documents and divides them into categories to streamline your search. Use US Legal Forms to obtain your Maine Satisfaction, Release or Cancellation of Mortgage by Corporation easy and fast.

What is a recorded satisfaction or release of mortgage?

In some cases, a mortgage may have been sold by the mortgage lender to another financial institution. If sold, the owner of the mortgage at the time of the final payment is responsible for completing the satisfaction of mortgage documentation.

How do I file a satisfaction mortgage?

How do I record my mortgage satisfaction?

In order to clear the title to the real property owned by the mortgagor, the Satisfaction of Mortgage document must be recorded with the County Recorder or Recorder of Deeds. If the mortgagee fails to record a satisfaction within the set time limits, the mortgagee may be responsible for damages set out by statute.

Satisfaction, Release or Cancellation of Mortgage by Corporation

Execution of Assignment or Satisfaction: Must be signed by the mortgagee.

Demand to Satisfy: None required. Mortgagee has 60 days from payoff of mortgage to record satisfaction or else suffer liability.

Recording Satisfaction: A mortgage only may be discharged by a written instrument acknowledging the satisfaction thereof and signed and acknowledged by the mortgagee or by the mortgagee's duly authorized officer or agent, personal representative or assignee.

Penalty: If a satisfied mortgage is not recorded as such by mortgagee within 60 days following satisfaction thereof, mortgagee becomes liable to aggreived parties for damages equal to exemplary damages of $200 per week after expiration of the 60 days, up to an aggregate maximum of $5,000 for all aggrieved parties or the actual loss sustained by the aggrieved party, whichever is greater, and attorney fees.

551. Entry on record; neglect to discharge

With respect to a mortgage securing an open-end line of credit, the 60-day period to deliver a release commences after the mortgagor delivers to the address designated for payments under the line of credit a written request to terminate the line and the mortgage together with payment in full of all amounts secured by the mortgage. The mortgagee may designate in writing a different address for delivery of written notices under this paragraph. [1999, c. 230, 1 (NEW); 1999, c. 230, 2 (AFF).]

All discharges of recorded mortgages, attachments or liens of any nature must be recorded by a written instrument and, except for termination statements filed pursuant to Title 11, section 9-1513, acknowledged in same manner as other instruments presented for record and no such discharges may be permitted by entry in the margin of the instrument to be discharged. [1999, c. 699, Pt. D, 22 (AMD); 1999, c. 699, Pt. D, 30 (AFF).]

All marginal discharges of mortgages recorded prior to April 1, 1974, duly attested by the register of deeds as being recorded from discharge in margin of original mortgage, are validated and have the same effect as if made as provided in section 551. [1997, c. 103, 1 (AMD).]

553-A. Discharge by attorney