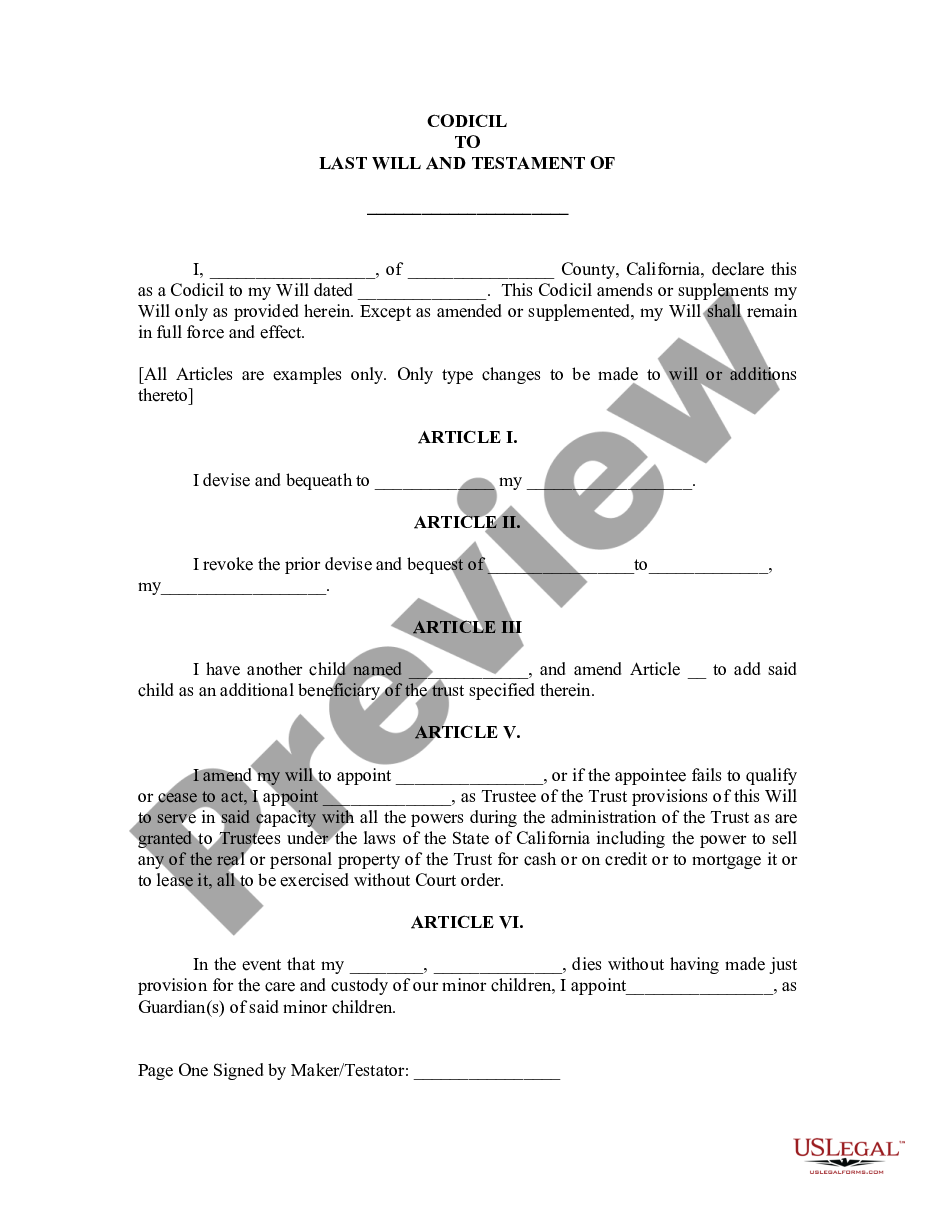 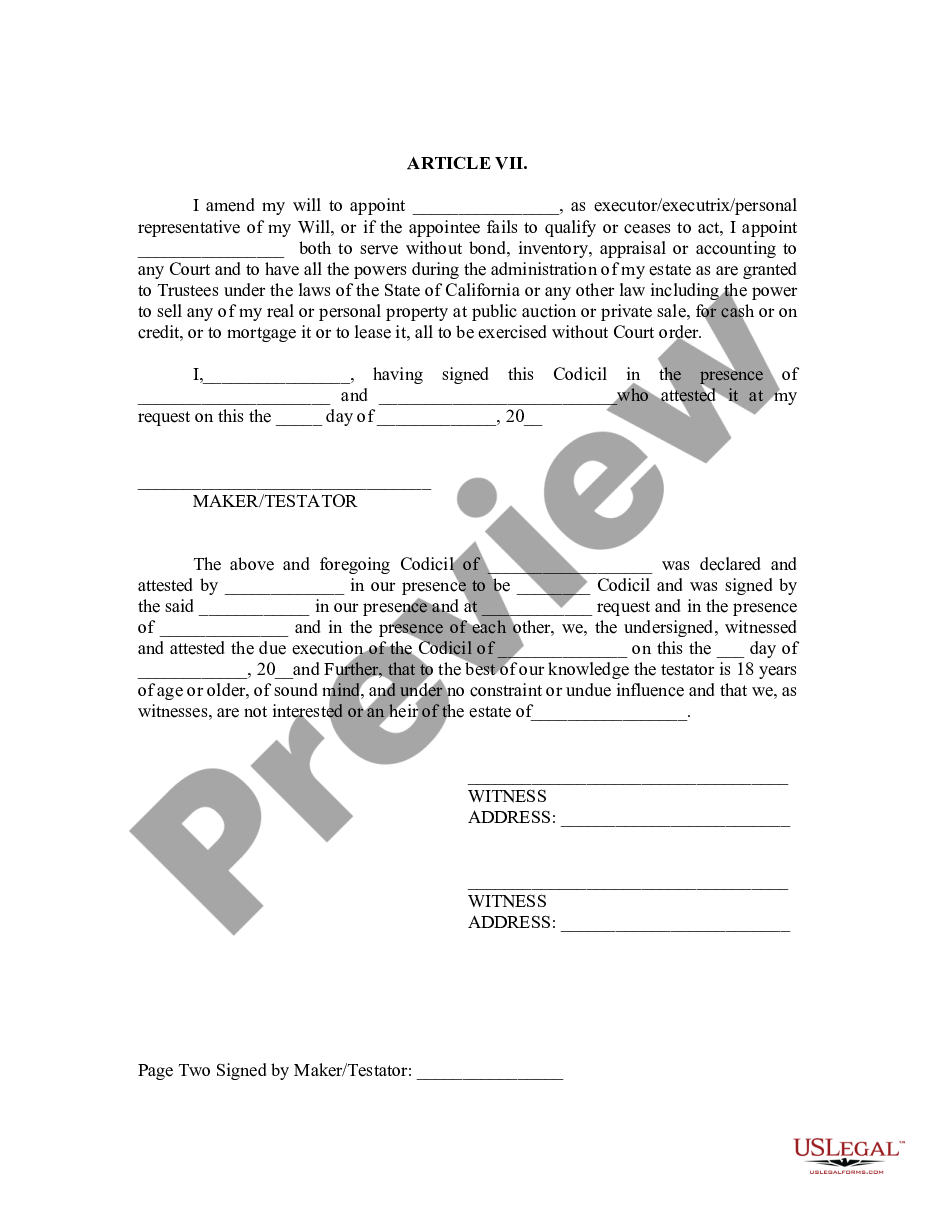 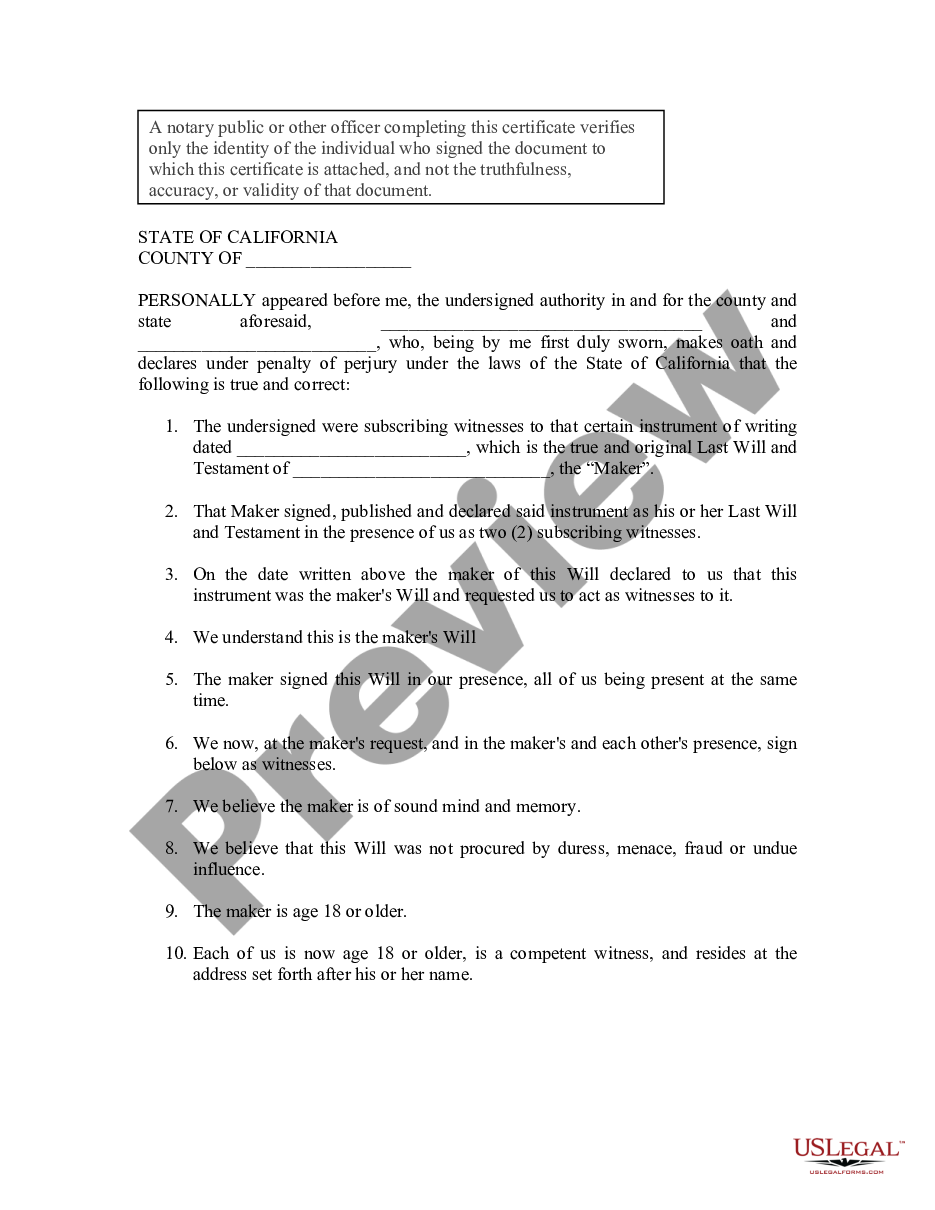 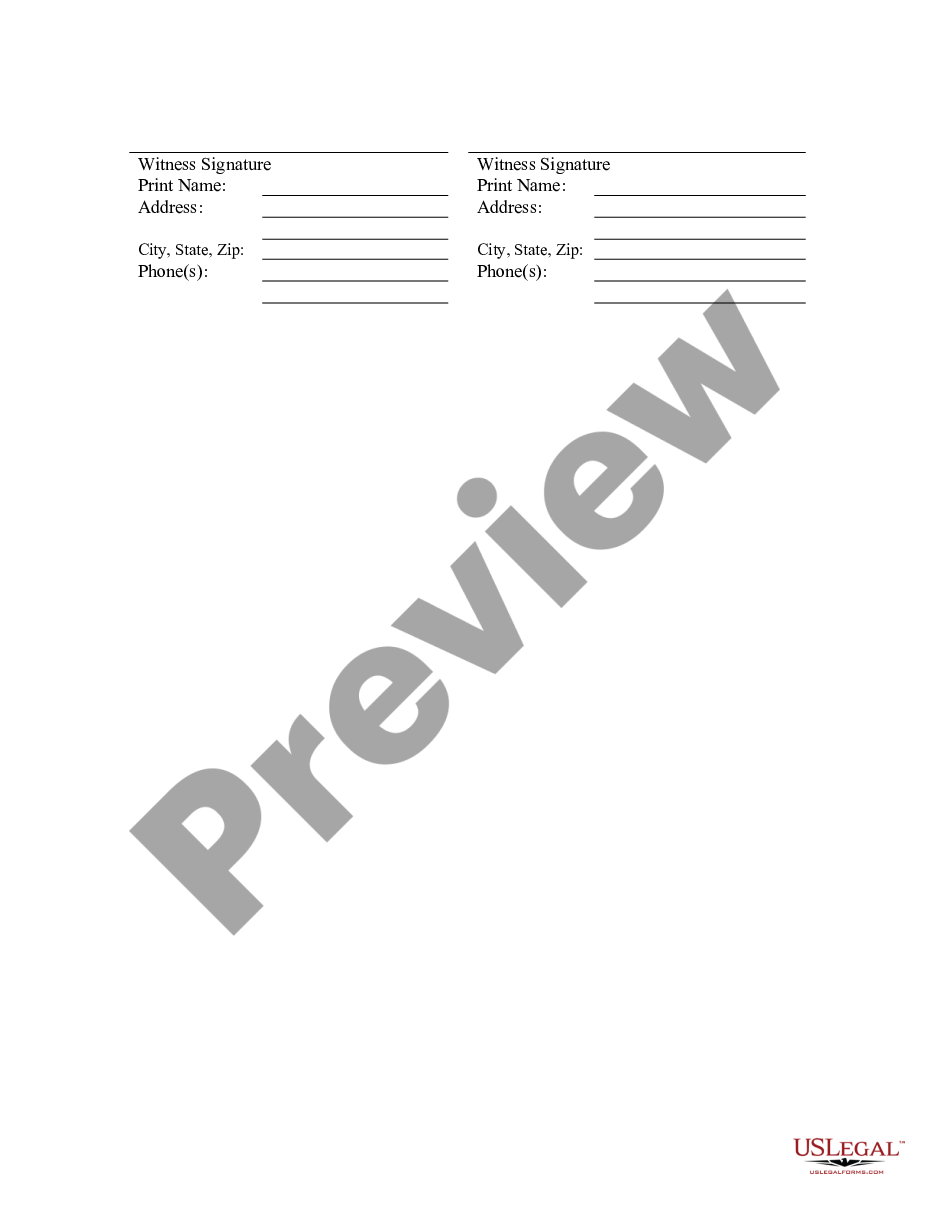 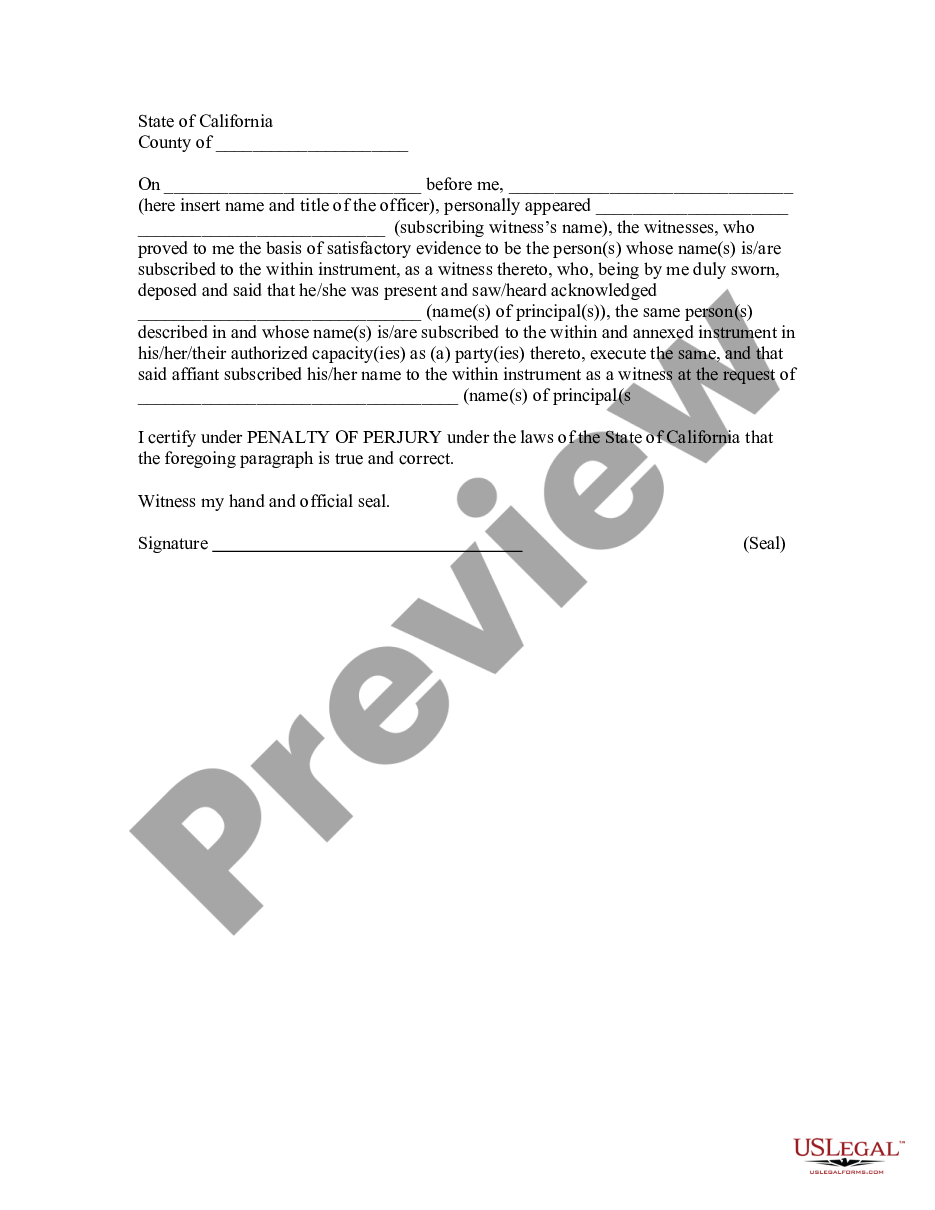 Description Codicil To Will California

This form is for a person to change their will by codicil rather than making an entirely new will. It contains a provision that the former will remains valid except as amended by the codicil. It also contains the state required execution format and attestation clause. You will need to add the articles as desired. Sample provisions are included.

Sample Of A Codicil To A Will Related Will Forms

How To Fill Out California Codicil To Will?

If you're searching for exact California Codicil to Will Form for Amending Your Will - Will Changes or Amendments copies, US Legal Forms is what you need; find files developed and checked by state-accredited attorneys. Employing US Legal Forms not just keeps you from headaches relating to rightful documentation; additionally, you save up time and effort, and cash! Downloading, printing out, and filling in a proficient form is much less expensive than inquiring a solicitor to get it done for you personally.

To start, complete your sign up process by providing your e-mail and creating a secret password. Adhere to the guidance listed below to create your account and get the California Codicil to Will Form for Amending Your Will - Will Changes or Amendments sample to deal with your circumstances:

And while, that is it. With a couple of simple actions you have an editable California Codicil to Will Form for Amending Your Will - Will Changes or Amendments. When you make your account, all prospective purchases will be processed even easier. If you have a US Legal Forms subscription, just log in profile and click the Download button you can find on the for’s page. Then, when you should employ this blank again, you'll constantly manage to find it in the My Forms menu. Don't spend your time and effort checking countless forms on several platforms. Buy precise templates from just one secure platform!

All forms provided by US Legal Forms, the nations leading legal forms publisher. When you need California Will, don't accept anything less than the USlegal™ brand. "The Forms Professionals Trust ™

Is it preferable to add a codicil to an existing will or is it better to simply draft another will for the client?

A codicil is usually a fairly short document and its sole purpose is to amend the existing last will and testament you've already created. It's far easier to add a codicil to a will than to entirely re-write one, but they're best used in certain circumstances:A codicil is perfect to make that adjustment.

Can I add a codicil to my will myself?

You can either make a codicil to your existing will or make a new will. Both require your signature and the signatures of two witnesses.You can have a lawyer write your codicil for you, or you can make one yourself. However, in most cases it makes more sense just to make a new will.

How do I add a codicil to my will UK?

You cannot amend your will after it's been signed and witnessed. The only way you can change a will is by making an official alteration called a codicil. You must sign a codicil and get it witnessed in the same way as witnessing a will. There's no limit on how many codicils you can add to a will.

How do you make a codicil?

Identify the section and content you want to change. The first step in amending your will is to review it. Type up the changes. Take the time to type up the codicil. Sign and date the codicil. Store your codicil in a safe place.

What is the difference between will and codicil?

What is the Difference Between a Will and a Codicil? A last will and testament, often simply referred to as a will, is a legal document that outlines the distribution details of one's possessions, including investments and other interests, upon their death. A codicil is used to update and amend a will.

How do you word a codicil to a will?

To write a codicil, first, title the document Codicil to the Last Will and Testament of your full name. Then, write an opening paragraph that states who you are, where you live, that you are of sound mind, and that the codicil amends your existing will.

What is the purpose of codicil?

Codicil. A document that is executed by a person who had previously made his or her will, to modify, delete, qualify, or revoke provisions contained in it. A codicil effectuates a change in an existing will without requiring that the will be reexecuted.

What's a supplement to a will called?

BENEFICIARY - A person named to receive property or other benefits. CODICIL A supplement or an addition to a Will. It may explain, modify, add to, subtract from, qualify, alter, restrain or revoke provisions in a Will. It must be executed with the same formalities as a Will.

How do you write a codicil to a will in Ontario?

A codicil is an amendment to a previous will. For instance, if you want to change the executor of your will and leave everything else the same, you can do a holograph codicil very quickly and simply. To make a holograph codicil you must write the entire document by hand, date, and sign it at the bottom.

Amendment To Will Try risk free