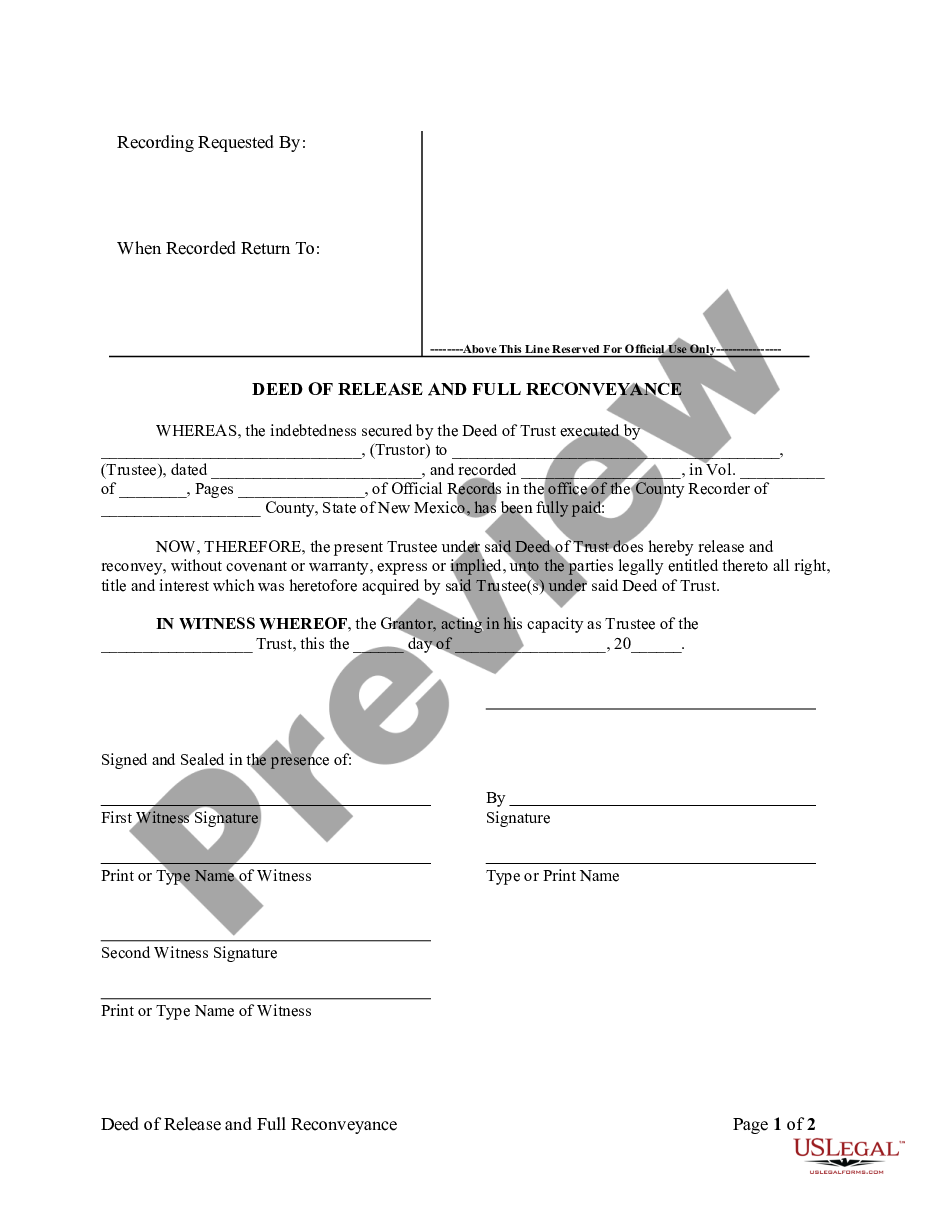 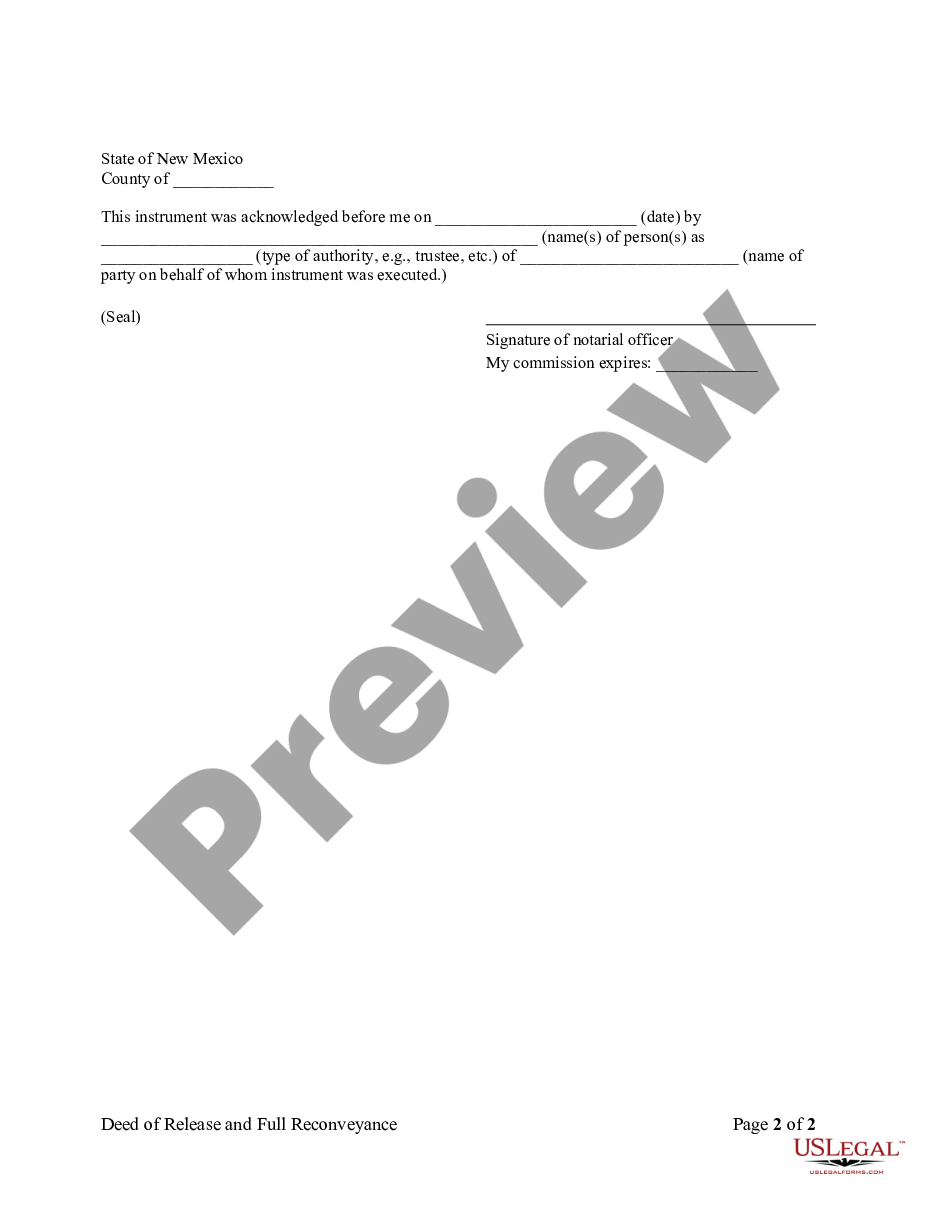 This form, a Deed of Release and Full Reconveyance - Individual Lender or Holder (Category: Mortgages and Deeds of Trust), is available for download in Word and Wordperfect formats. Adapt to fit your circumstances.
Deed Reconveyance Contract Related Forms

How To Fill Out New Mexico Holder?

US Legal Forms is actually a unique system where you can find any legal or tax template for submitting, such as New Mexico Deed of Release and Full Reconveyance - Individual Lender or Holder. If you’re fed up with wasting time seeking perfect samples and paying money on record preparation/legal professional fees, then US Legal Forms is precisely what you’re trying to find.

To enjoy all the service’s advantages, you don't need to download any software but simply pick a subscription plan and sign up your account. If you have one, just log in and get a suitable sample, download it, and fill it out. Saved documents are all stored in the My Forms folder.

If you don't have a subscription but need New Mexico Deed of Release and Full Reconveyance - Individual Lender or Holder, check out the recommendations below:

Now, complete the file online or print it. If you are unsure regarding your New Mexico Deed of Release and Full Reconveyance - Individual Lender or Holder form, contact a legal professional to examine it before you decide to send or file it. Begin hassle-free!

All forms provided by US Legal Forms, the nations leading legal forms publisher. When you need Release Reconveyance, don't accept anything less than the USlegal™ brand. "The Forms Professionals Trust ™

Release Of Deed Of Trust In New Mexico FAQ

How do I release my mortgage property?

Take possession of all the papers. Get an NOC. Get your CIBIL report updated. Get the lien withdrawn. Get an encumbrance certificate.

What does deed of reconveyance mean?

Is completed and signed by the trustee, whose signature must be notarized. Full Reconveyance form can be purchased at most office supply or stationery stores. Usually the trustee named on your Deed of Trust will also have forms available and will issue the Full Reconveyance.

Who gets the deed after closing?

Who are the parties in a Deed of Trust transaction?

A deed of trust is a method of securing a real estate transaction that includes three parties: a lender, borrower and a third-party trustee.

The deed must be signed by the party or parties making the conveyance or grant; and 7.

Is a release of mortgage the same as a deed?

When you pay off your loan and you have a mortgage, the lender will send you or the local recorder of deeds or office that handles the filing of real estate documents a release of mortgage.On the other hand, when you have a trust deed or deed of trust, the lender files a release deed.

How do I file reconveyance?

What is a mortgage release document?

A Mortgage Release is where you, the homeowner, voluntarily transfer the ownership of your property to the owner of your mortgage in exchange for a release from your mortgage loan and payments.Depending on your situation, you may be required to make a financial contribution to receive a mortgage release.

What Is A Deed Of Release And Reconveyance Try risk free

Deed of Release and Full Reconveyance - Individual Lender or Holder

Assignment: If an assignment of mortgage appears upon the proper record of such county clerk, then payment may be made to the last assignee whose assignment is so recorded, and such [full] payment shall be effectual to extinguish all claims against such mortgagor.

In cases where assignments of real estate mortgages are made subsequent to the date this act takes effect, and such assignments are not recorded in the office of the county clerk of the proper county, the mortgagor, his heirs, personal representatives or assigns may pay the principal debt secured by such mortgage or accrued interest thereon, prior to the recording of such assignment, to the mortgagee; but if an assignment of such mortgage appears upon the proper record of such county clerk, then such payment may be made to the last assignee whose assignment is so recorded, and such payment shall be effectual to extinguish all claims against such mortgagor, his heirs, personal representatives or assigns, for or on account of such interest or such principal indebtedness. No transfer of any note, bond or other evidence of indebtedness, by endorsement or otherwise, where such indebtedness is secured by mortgage on real estate within this state, shall prevent or operate to defeat the defense of payment of such interest or principal by the mortgagor, his heirs, personal representatives or assigns, where such payment has been made to the mortgagee whose mortgage is duly recorded or to the assignee whose assignment appears last of record in accordance with the provisions of this act [48-7-2, 48-7-3 NMSA 1978]; provided, however, that the assignee who may hold an unrecorded assignment of a real estate mortgage which is immediately subsequent to such recorded mortgage or to the last recorded assignment shall have a right of action against his assignor to recover the amount of any such payment of interest or principal made to such assignor, as upon an account for money had and received for the use of such assignee.

48-7-4. Release on record upon satisfaction of mortgage.

A. When any debt or evidence of debt secured by a mortgage or deed of trust upon any real estate in the state has been fully satisfied, it is the duty of the mortgagee, trustee or the assignee of the debt or evidence of debt, as the case may be, to cause the full satisfaction of it to be entered of record in the office of the county clerk of the county where the mortgage or deed of trust is recorded.