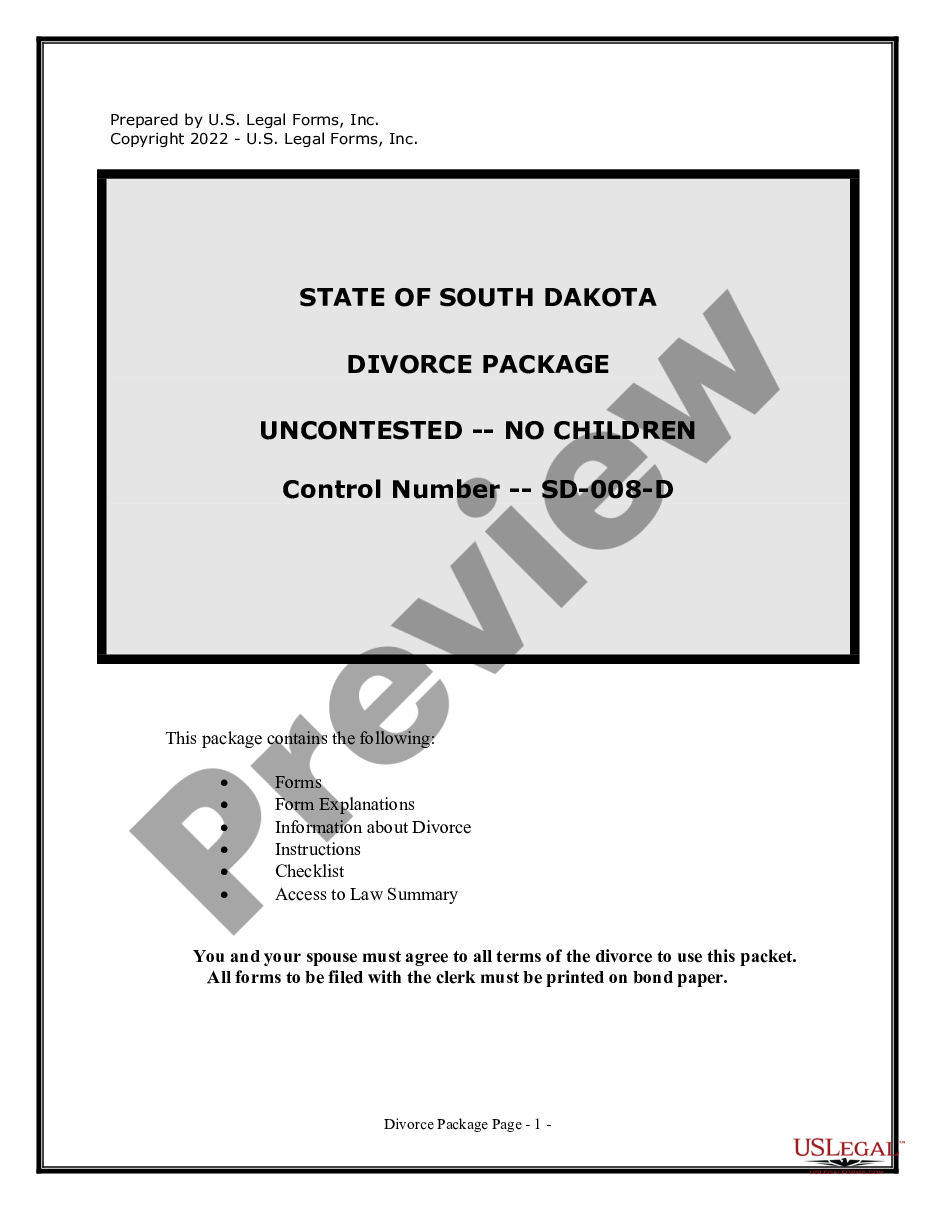 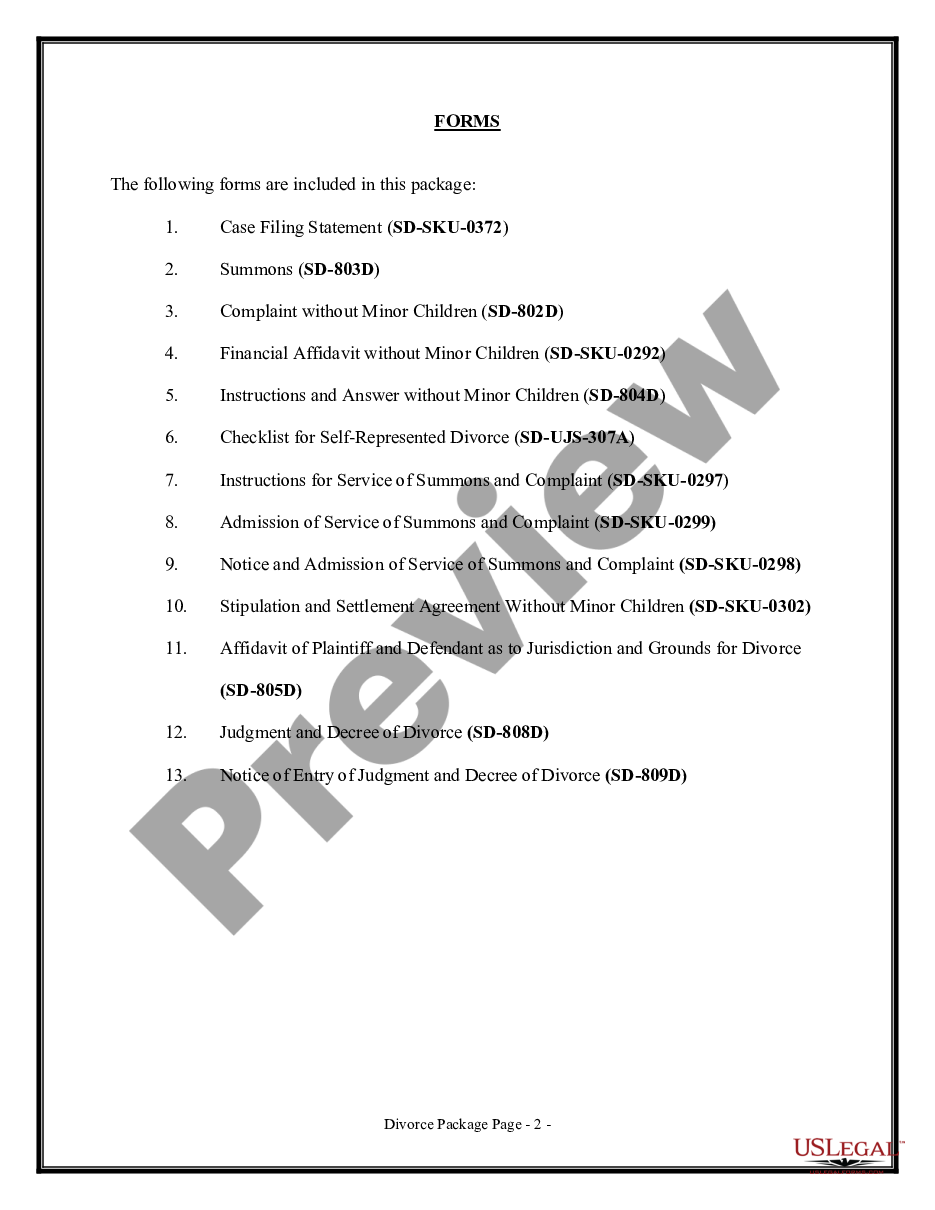 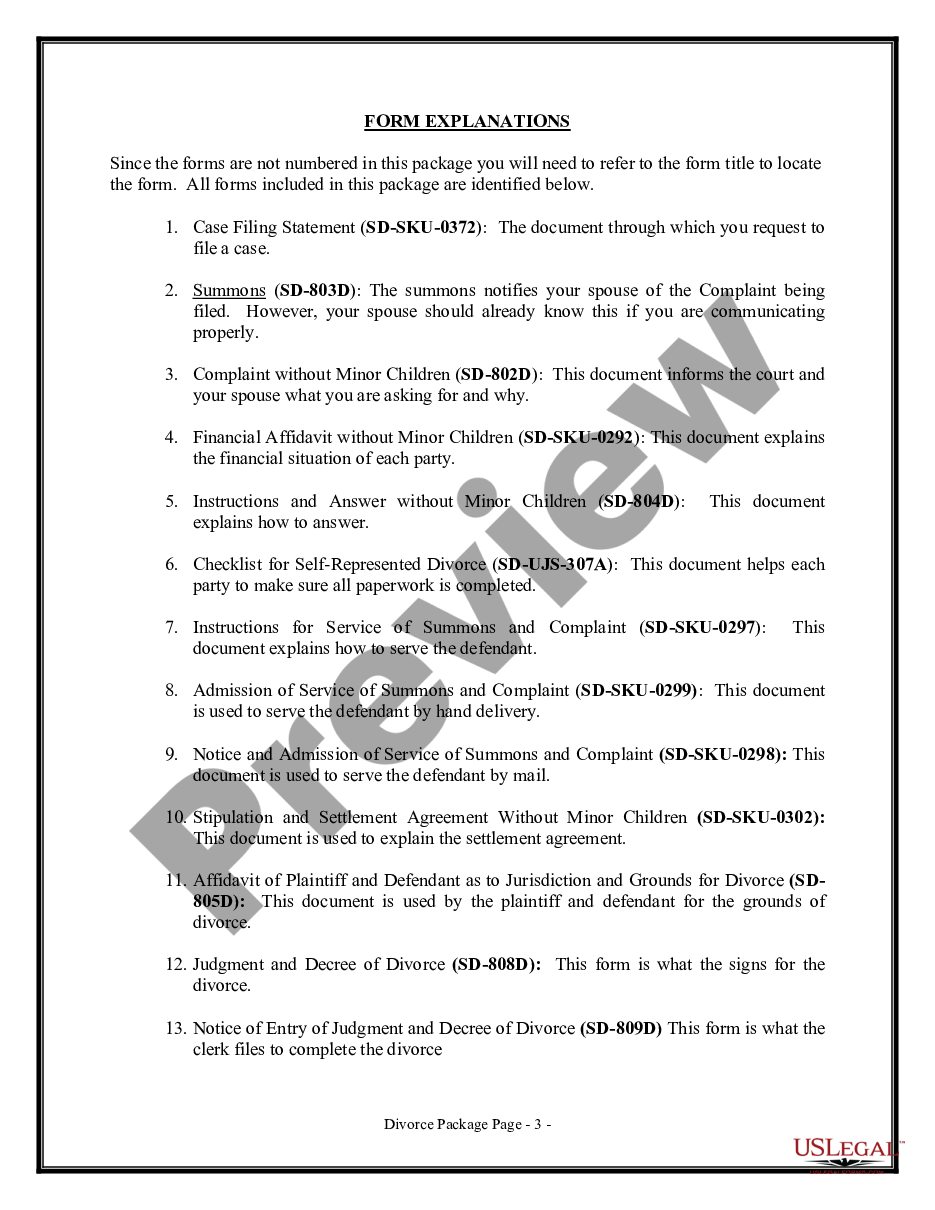 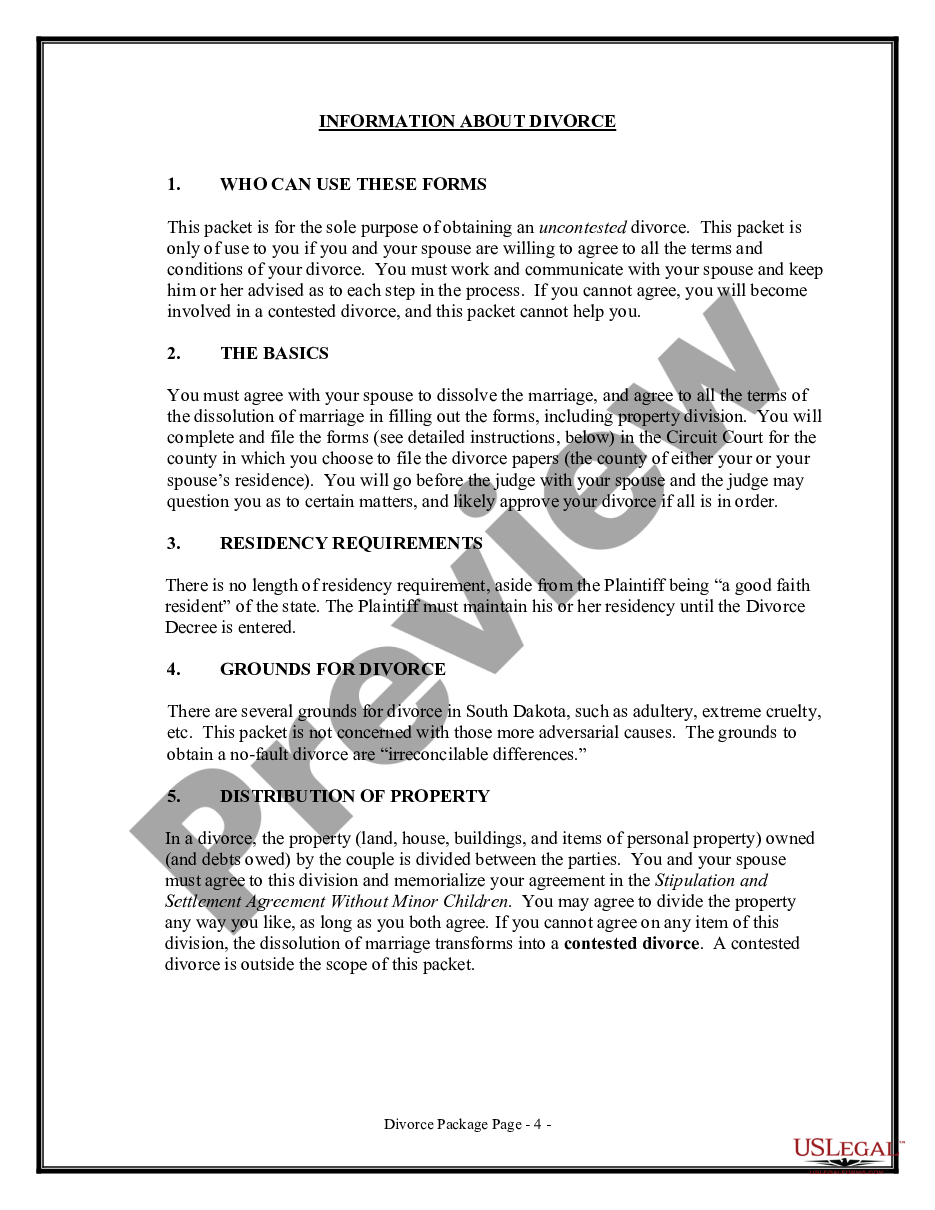 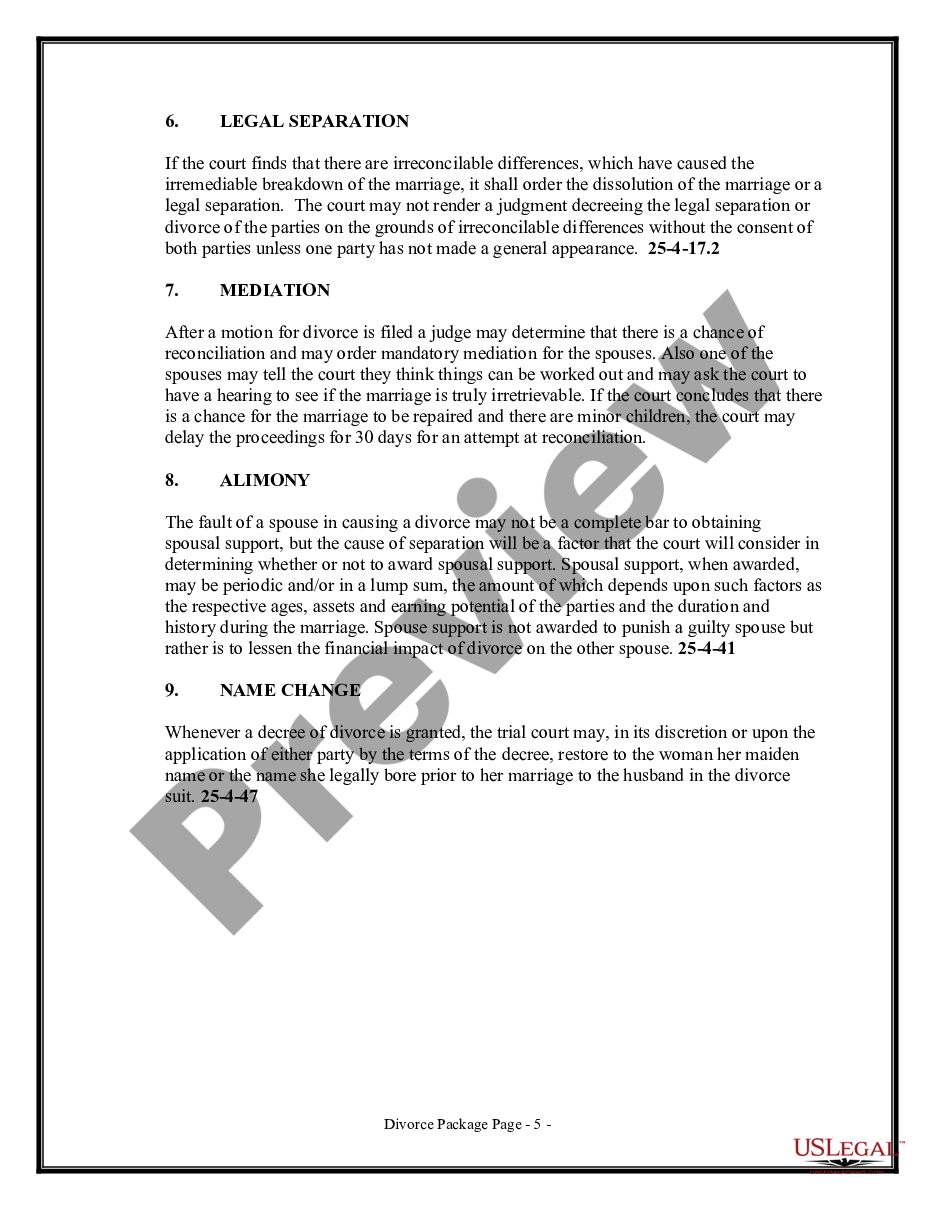 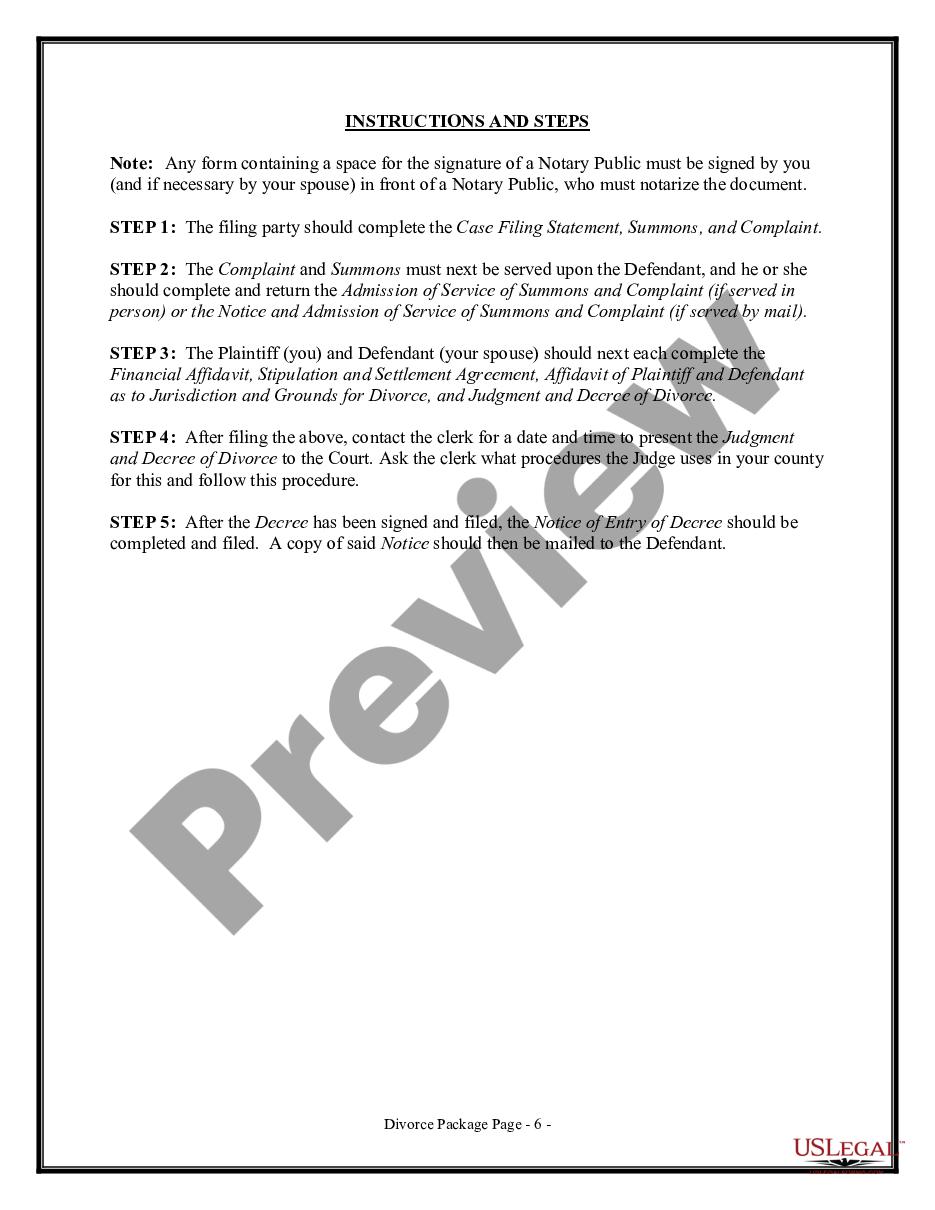 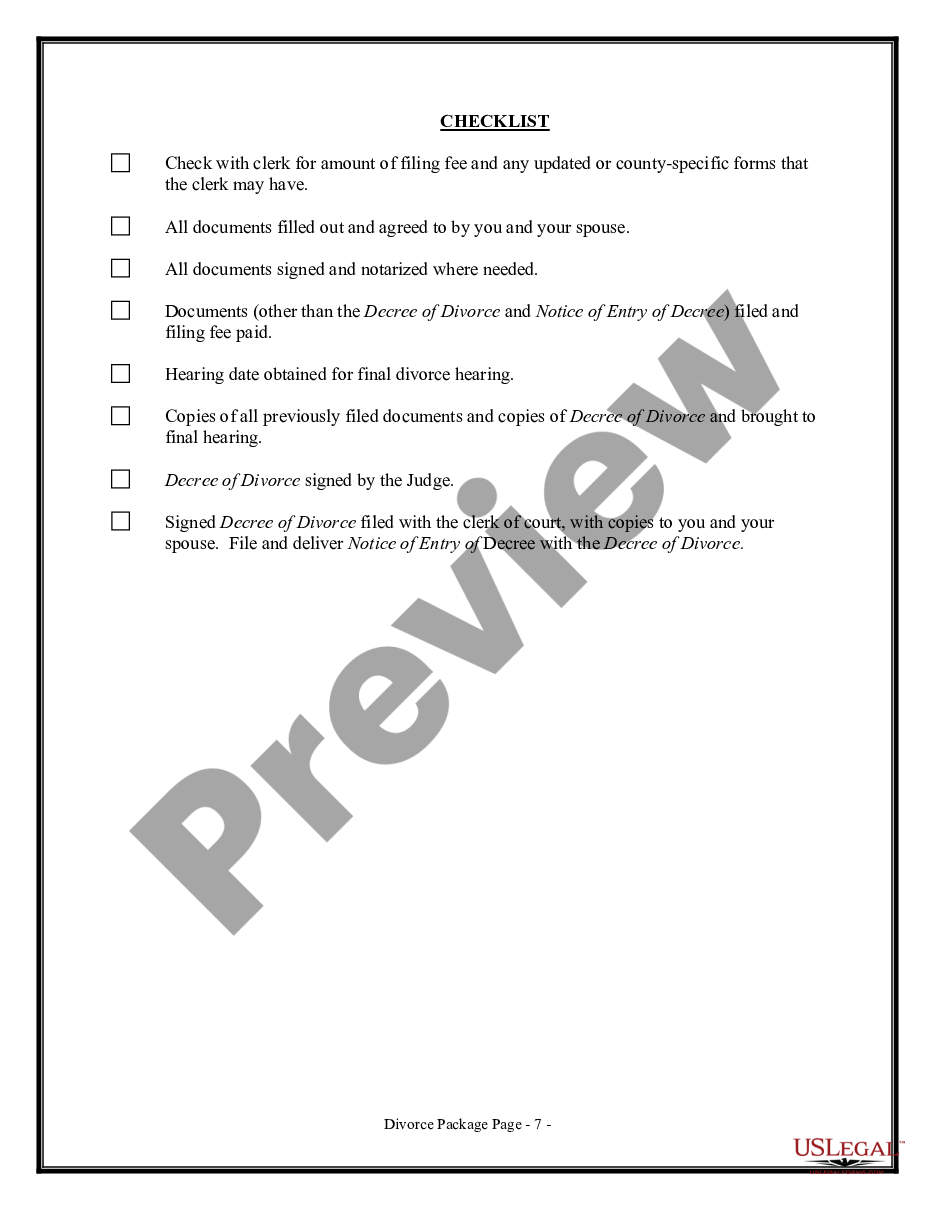 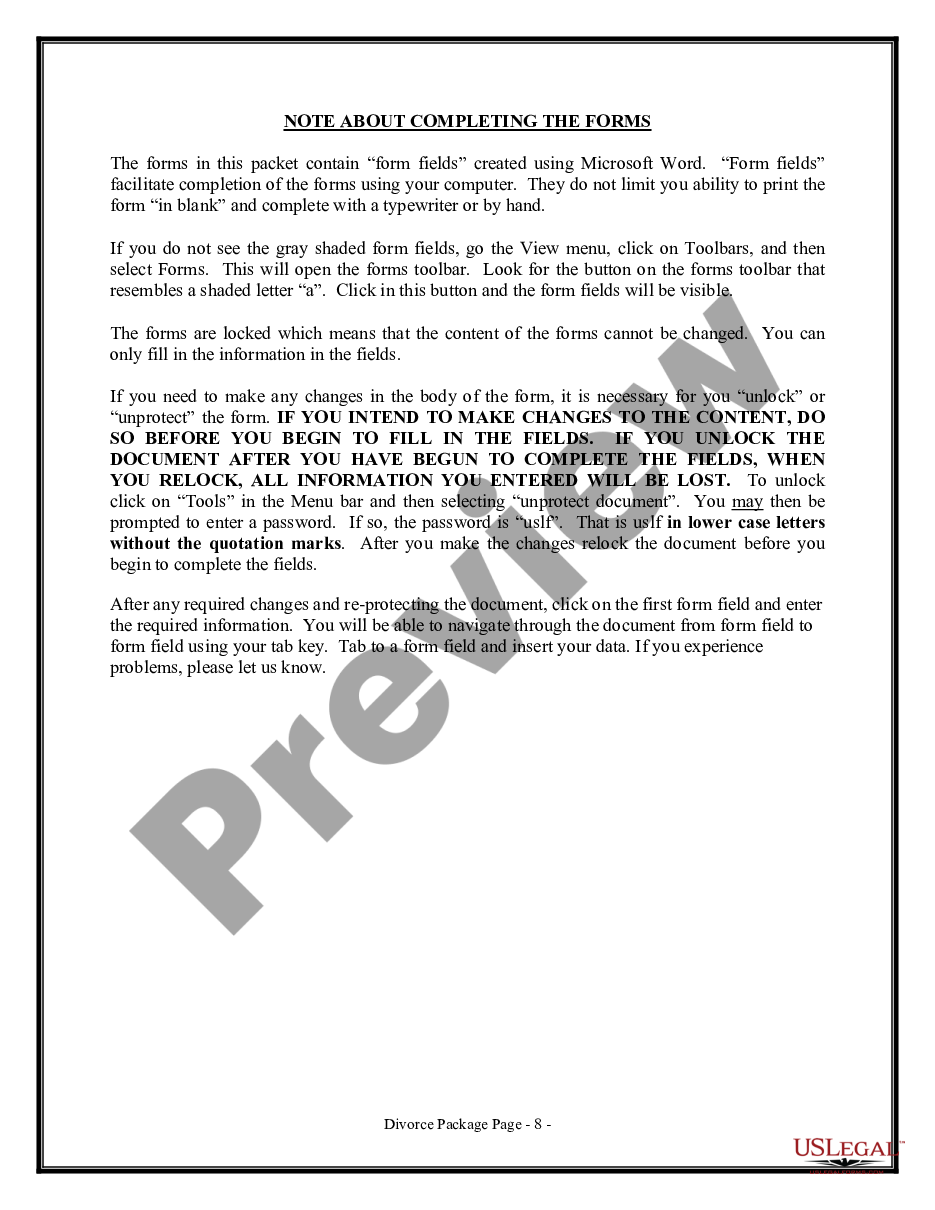 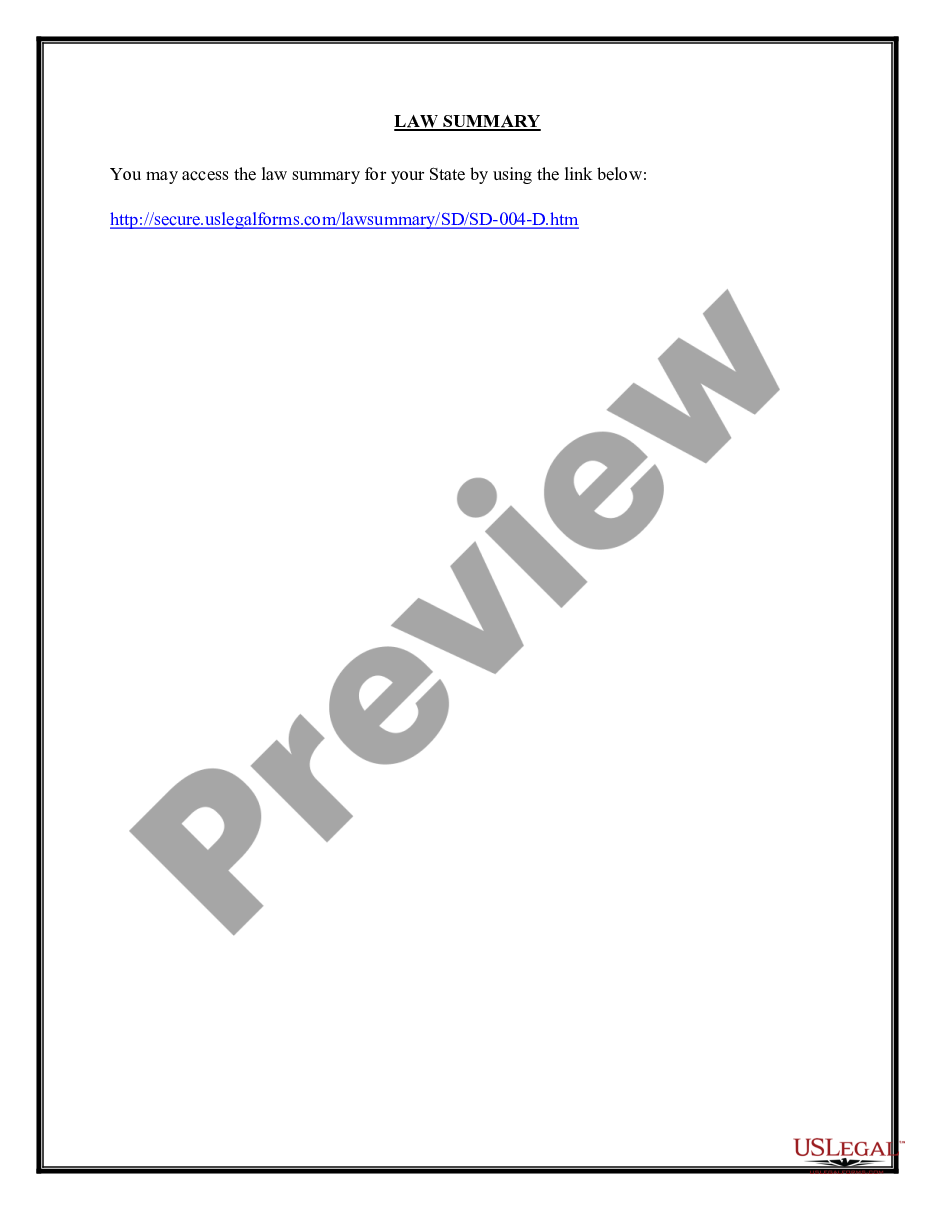 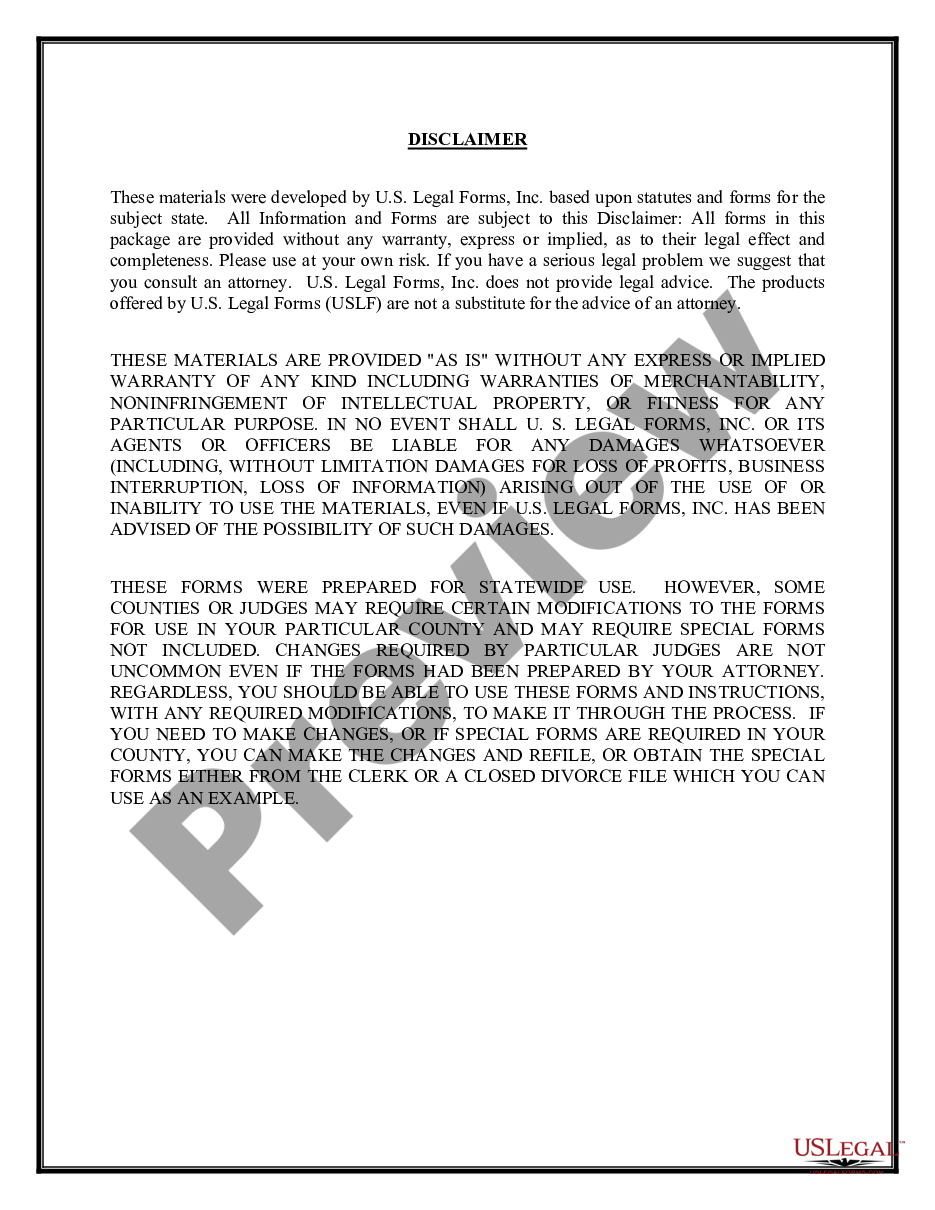 How To Fill Out South Dakota No-Fault Agreed Uncontested Divorce Package For Dissolution Of Marriage For Persons With No Children With Or Without Property And Debts?

Creating documents isn't the most simple process, especially for those who rarely deal with legal paperwork. That's why we recommend utilizing correct South Dakota No-Fault Agreed Uncontested Divorce Package for Dissolution of Marriage for Persons with No Children with or without Property and Debts templates made by professional attorneys. It allows you to avoid troubles when in court or working with formal institutions. Find the files you want on our website for top-quality forms and correct descriptions.

If you’re a user having a US Legal Forms subscription, simply log in your account. As soon as you’re in, the Download button will automatically appear on the file web page. Right after getting the sample, it will be stored in the My Forms menu.

Users with no a subscription can quickly get an account. Use this short step-by-step guide to get the South Dakota No-Fault Agreed Uncontested Divorce Package for Dissolution of Marriage for Persons with No Children with or without Property and Debts:

Right after doing these simple steps, it is possible to fill out the sample in a preferred editor. Check the filled in details and consider requesting a legal professional to review your South Dakota No-Fault Agreed Uncontested Divorce Package for Dissolution of Marriage for Persons with No Children with or without Property and Debts for correctness. With US Legal Forms, everything becomes easier. Try it out now!

Divorces may be granted for any of the following seven (7) causes:


Chronic mental illness is a discretionary ground for divorce. In case of incurable, chronic mania or dementia of either spouse having existed for five years or more, while under confinement by order of a court of record or of the Board of Mental Illness as provided by law, the court may, in its discretion, grant a divorce. (25-4-18)

After a motion for divorce is filed a judge may determine that there is a chance of reconciliation and may order mandatory mediation for the spouses. Also one of the spouses may tell the court they think things can be worked out and may ask the court to have a hearing to see if the marriage is truly irretrievable. If the court concludes that there is a chance for the marriage to be repaired and there are minor children, the court may delay the proceedings for 30 days for an attempt at reconciliation. 25-4-56

The assignment of fault may make a difference in terms of a court's final determination of the division of property. If one party is determined to be at fault for the breakdown of the marriage, then the court may award the other party more property. 25-4-44

The fault of a spouse in causing a divorce may not be a complete bar to obtaining spousal support, but the cause of separation will be a factor that the court will consider in determining whether or not to award spousal support. Spousal support, when awarded, may be periodic and/or in a lump sum, the amount of which depends upon such factors as the respective ages, assets and earning potential of the parties and the duration and history during the marriage. Spouse support is not awarded to punish a guilty spouse but rather is to lessen the financial impact of divorce on the other spouse. 25-4-41

In determining the custody of minor children, the court is guided by one standard--the best interests of the child. Custody will not be given to a parent as a reward or as punishment to the guilty parent but rather to the one most adaptable to the task of caring for the child and able to control and direct the child.

Factors the court considers include:


The court will normally set visitation rights if the parents cannot voluntarily agree upon satisfactory arrangements. 25-4-45

The court awards child support for the benefit of the child, not as a punishment or reward to the adults. The court is guided by the needs of the child and the ability of the supporting parent or parents to pay. The use of the state Child Support Guidelines provides an amount of child support that is presumed to be correct, but the court may deviate from these guidelines in appropriate circumstances. 25-5-18.1

A settlement agreement is a written contract between the parties that sets forth their rights, duties and obligations that arise out of their separation and divorce and may include such things as the division of their property, spousal support, attorney's fees, custody of their children and child support. Such agreements are encouraged since they may amicably settle the rights of the husband and wife in the estate and property of the other.

Restoration of former name to wife. Whenever a decree of divorce is granted, the trial court may, in its discretion or upon the application of either party by the terms of the decree, restore to the woman her maiden name or the name she legally bore prior to her marriage to the husband in the divorce suit. 25-4-47