Rhode Island Satisfaction, Release or Cancellation of Mortgage by Individual 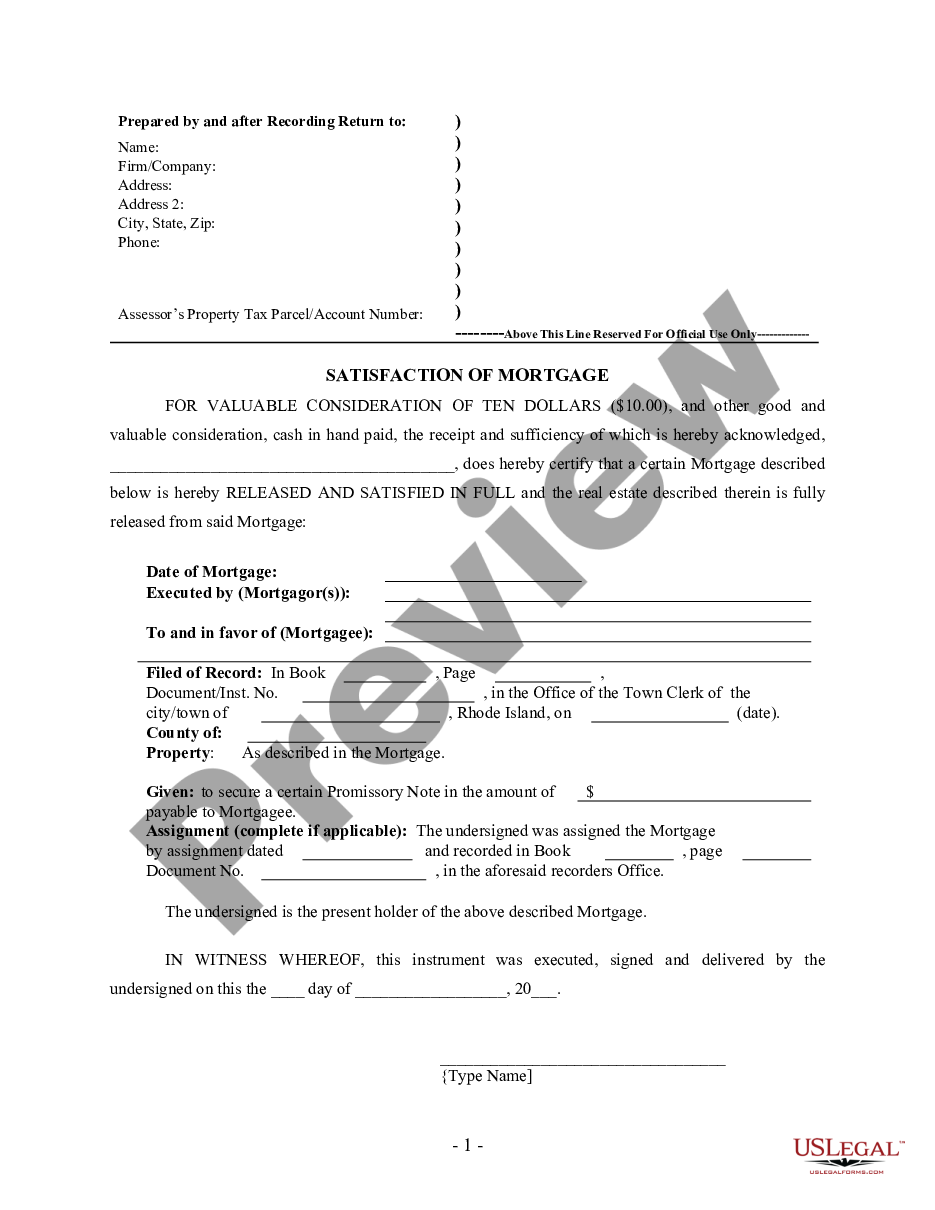 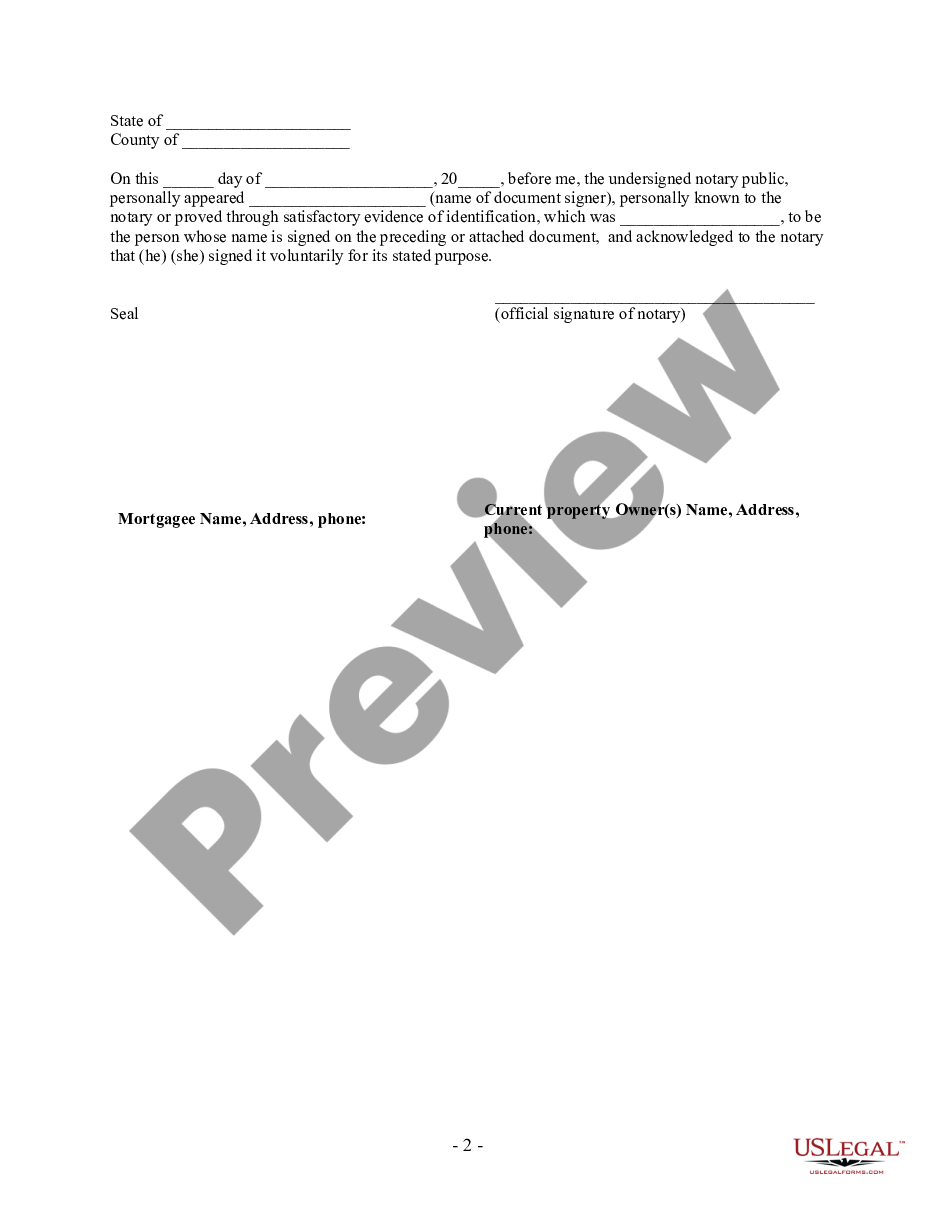 This form is for the satisfaction or release of a deed of trust for the state of Rhode Island by an Individual. This form complies with all state statutory laws and requires signing in front of a notary public. The described real estate is therefore released from the mortgage.
Related Forms

How To Fill Out Rhode Island Satisfaction, Release Or Cancellation Of Mortgage By Individual?

The work with papers isn't the most easy task, especially for those who almost never deal with legal papers. That's why we advise making use of correct Rhode Island Satisfaction, Release or Cancellation of Mortgage by Individual samples made by skilled lawyers. It allows you to avoid troubles when in court or handling formal organizations. Find the documents you require on our website for top-quality forms and accurate information.

If you’re a user with a US Legal Forms subscription, simply log in your account. As soon as you are in, the Download button will immediately appear on the file page. Soon after getting the sample, it will be stored in the My Forms menu.

Users without a subscription can quickly get an account. Utilize this simple step-by-step guide to get the Rhode Island Satisfaction, Release or Cancellation of Mortgage by Individual:

Right after doing these easy steps, you can complete the sample in an appropriate editor. Check the filled in information and consider requesting an attorney to review your Rhode Island Satisfaction, Release or Cancellation of Mortgage by Individual for correctness. With US Legal Forms, everything becomes much easier. Try it now!

How do I complete a satisfaction mortgage?

What does release of mortgage mean?

A Mortgage Release is where you, the homeowner, voluntarily transfer the ownership of your property to the owner of your mortgage in exchange for a release from your mortgage loan and payments.Depending on your situation, you may be required to make a financial contribution to receive a mortgage release.

In some cases, a mortgage may have been sold by the mortgage lender to another financial institution. If sold, the owner of the mortgage at the time of the final payment is responsible for completing the satisfaction of mortgage documentation.

What is a recorded satisfaction or release of mortgage?

What is mortgage release satisfaction and discharge?

Once you've paid off your outstanding mortgage debt, the lender must prepare and issue a release of mortgage. This document officially discharges you from the debt obligation and removes the lien against the property.

Satisfaction, Release or Cancellation of Mortgage by Individual

Assignment: Assignee may not enforce rights until assignment is recorded.

Demand to Satisfy: A request must be made and reasonable charges for the satisfaction tendered to the mortgagee, who, within ten days after receipt, must discharge the mortgage of record.

Recording Satisfaction: Satisfaction (discharge) may be recorded by the mortgagee indicating upon the recorded mortgage document that same is cancelled and satisfied, and signing the document. Satisfaction may also be achieved by a separate document (a deed of release) duly acknowledged and recorded.

Marginal Satisfaction: Satisfaction (discharge) may be recorded by the mortgagee indicating upon the recorded mortgage document that same is cancelled and satisfied, and signing the document.

34-26-2 Right to discharge on satisfaction of mortgage - Escrow accounts.

A mortgage may be discharged in whole or in part by an entry acknowledging the satisfaction thereof or the payment thereon, as the case may be, made on the face or back of the mortgage, or upon the face or margin of the record of the mortgage, in the records of land evidence, and signed by the mortgagee or by his or her executor, administrator, successor, or, if the mortgage be assigned, by the assignee or his or her executor or administrator; and such entry shall have the same effect as a deed of release duly acknowledged and recorded.

34-26-4 Requiring assignment of mortgage in lieu of discharge; Enforcement by incumbrancers.

34-26-5 Liability of mortgagee for failure to discharge, release, or transfer mortgage.

(a) If any mortgagee, his, her or its heirs, executors, administrators, agents, successors, or assigns, shall not, within ten (10) days after a request made in that behalf and a tender of all reasonable charges therefor, discharge the mortgage in one of the modes aforesaid, or otherwise make and execute a release and quitclaim of the estate so mortgaged, and acknowledge it before some proper officer, or transfer the mortgage if required under the provisions of 34-26-4, he, she, or they so refusing shall be liable to make good all damages that shall accrue for want of the discharge, release, or transfer, to be recovered in a civil action; and in case judgment shall pass against the party sued, the mortgagee shall pay the plaintiff reasonable attorney's fees and triple costs upon the suit.
(b) In the event of noncompliance with the provisions of either this section and 34-26-2, the mortgagee shall pay a penalty to the mortgagor for noncompliance in the amount of fifty dollars ($50.00) for a first day of noncompliance and five dollars ($5.00) for each day thereafter that the party remains in noncompliance. The mortgagor shall also be entitled to a reimbursement of reasonable attorney's fees, if applicable, for the costs incurred by the mortgagor andr his, her or its attorneys in attempting to obtain a discharge to which the mortgage was lawfully entitled pursuant to the provisions of this section and 34-26-2. Demand for penalties and, if applicable, attorney's fees and costs pursuant to this section may be made to the department of business regulation, in those instances in which the mortgagee is a regulated institution as defined in Title 19, and the department shall direct such regulated institutions to pay applicable penalties and reimburse effected mortgagors for attorneys fees and costs incurred, on confirmed instances of noncompliance. The department may promulgate rules and regulations governing the processing of such reimbursement. In those instances in which the mortgagee is not a regulated institution as defined in Title 19, the Department shall provide the mortgagor with the name, address and telephone number of the regulatory agency having jurisdiction over the actions of such mortgagees.
(c) As used herein, the term first day of noncompliance shall mean the first day following the last day for a mortgagee or similar party to discharge the mortgage.

34-26-6 Other forms of discharge or release preserved.

Nothing contained in this chapter shall be so construed as to defeat, invalidate, annul, or render ineffectual any other legal or equitable discharge, payment, satisfaction, or release of any mortgage.