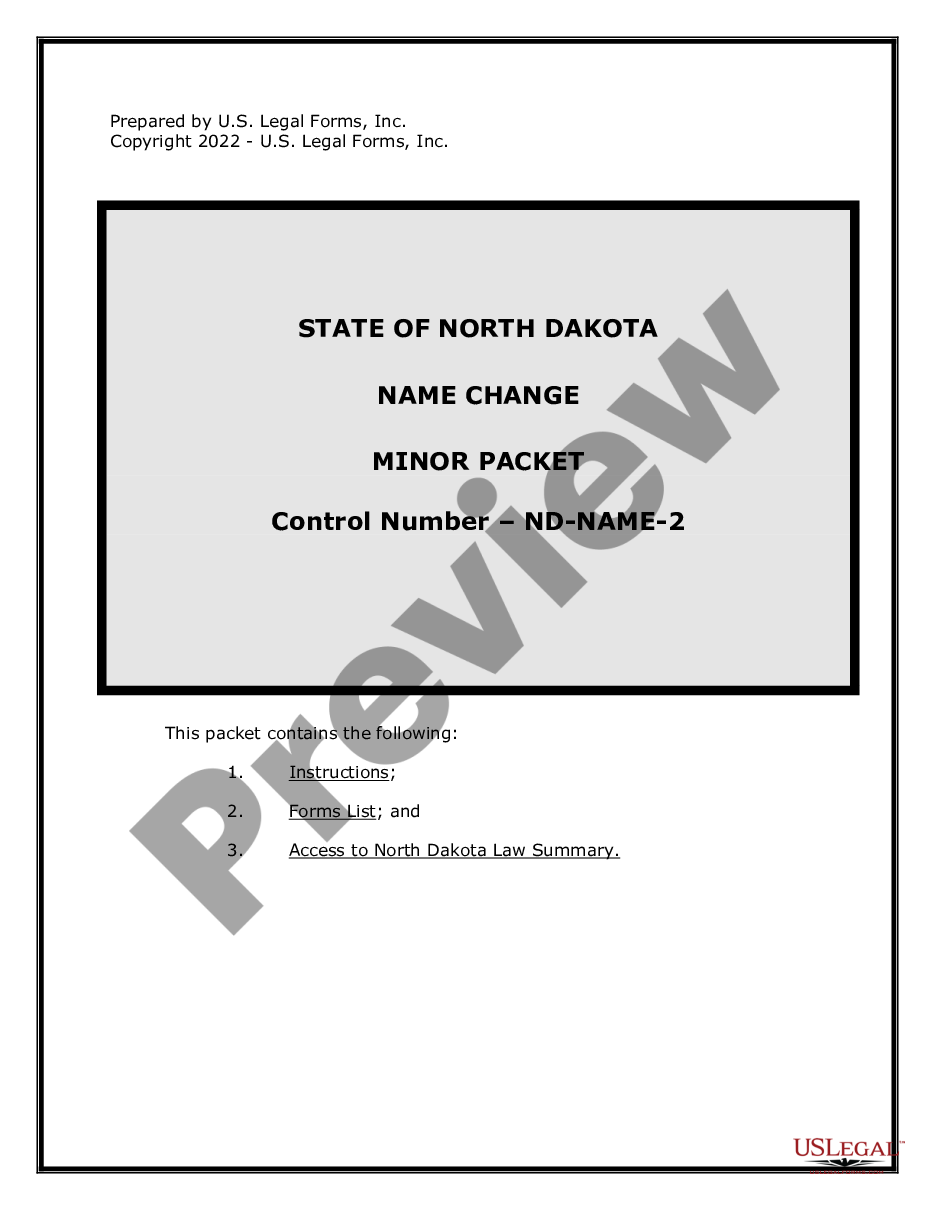 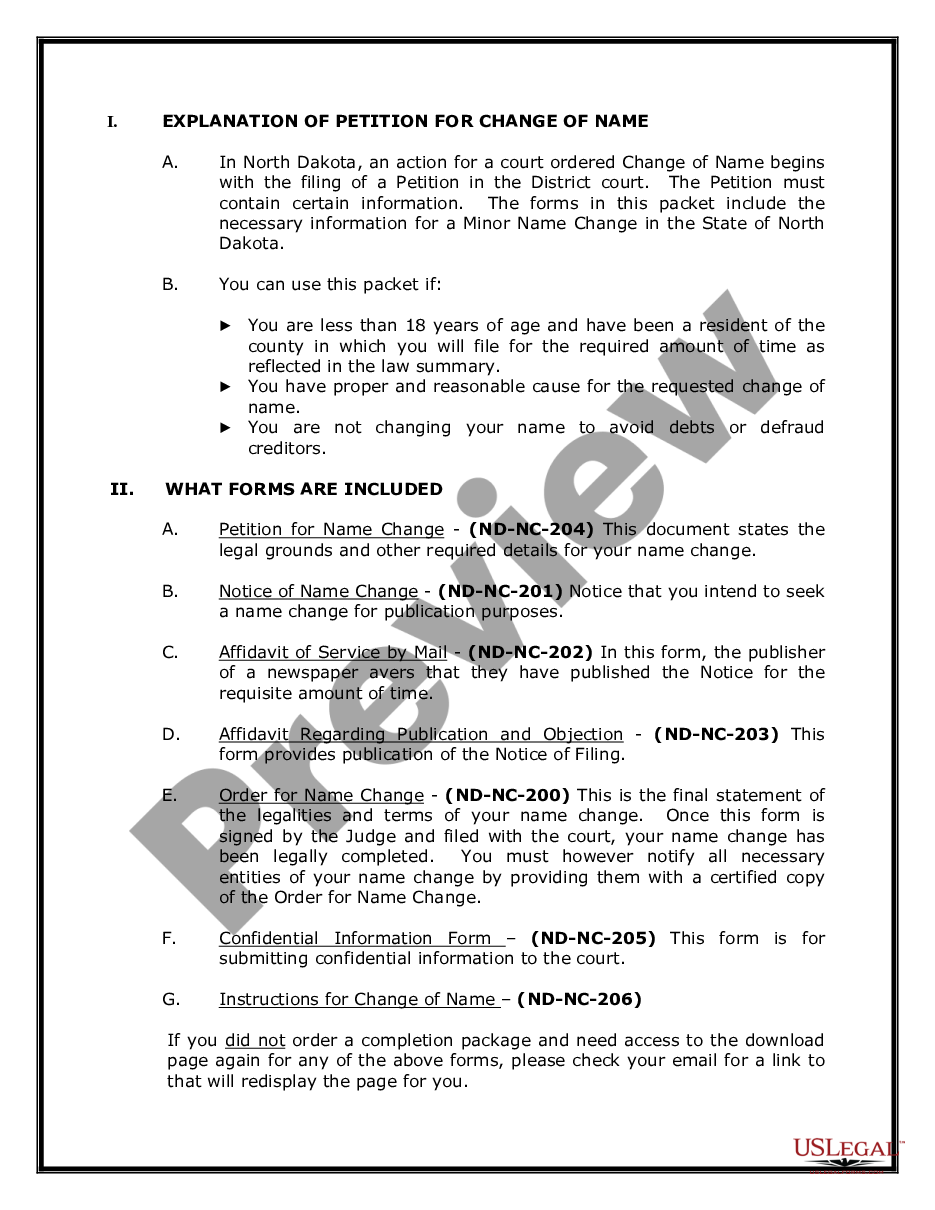 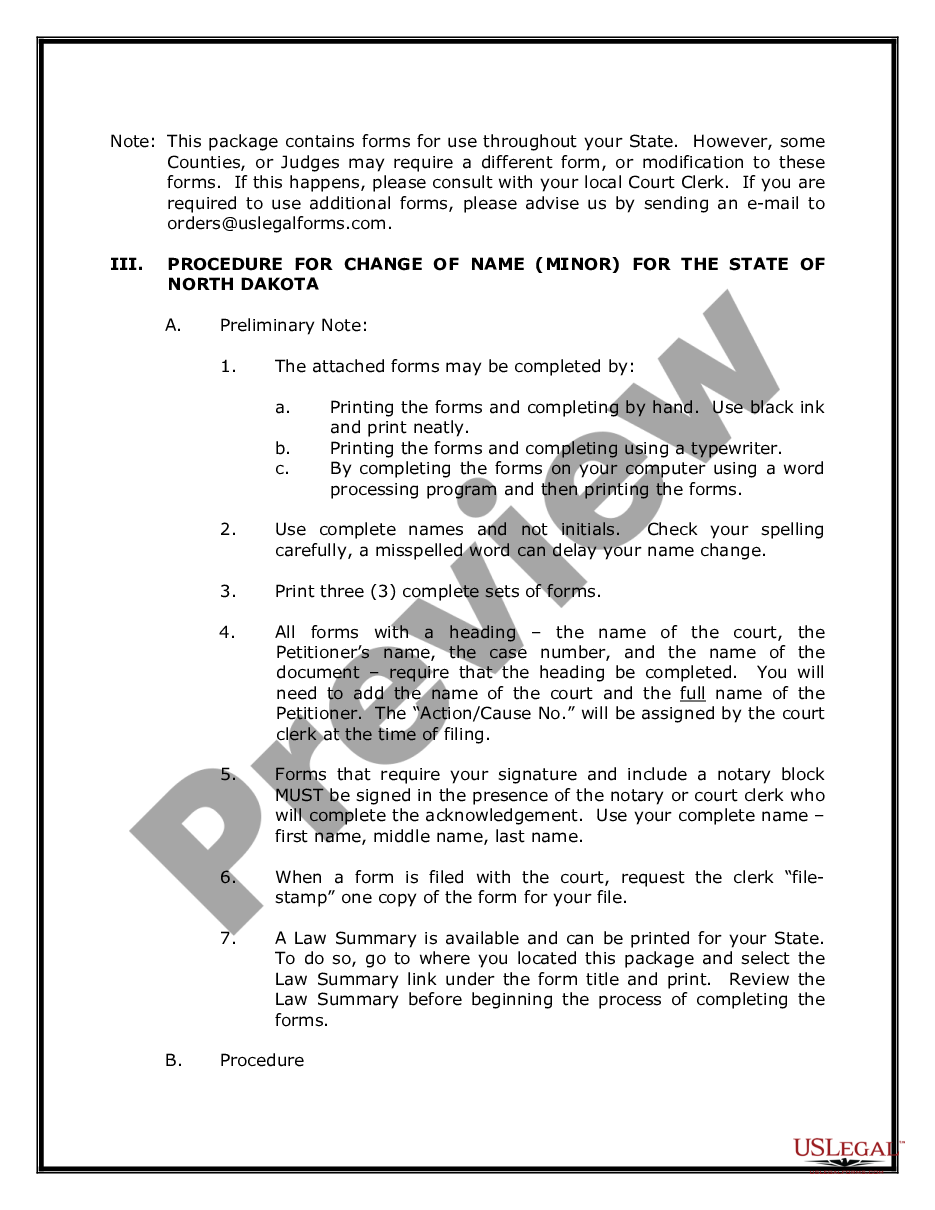 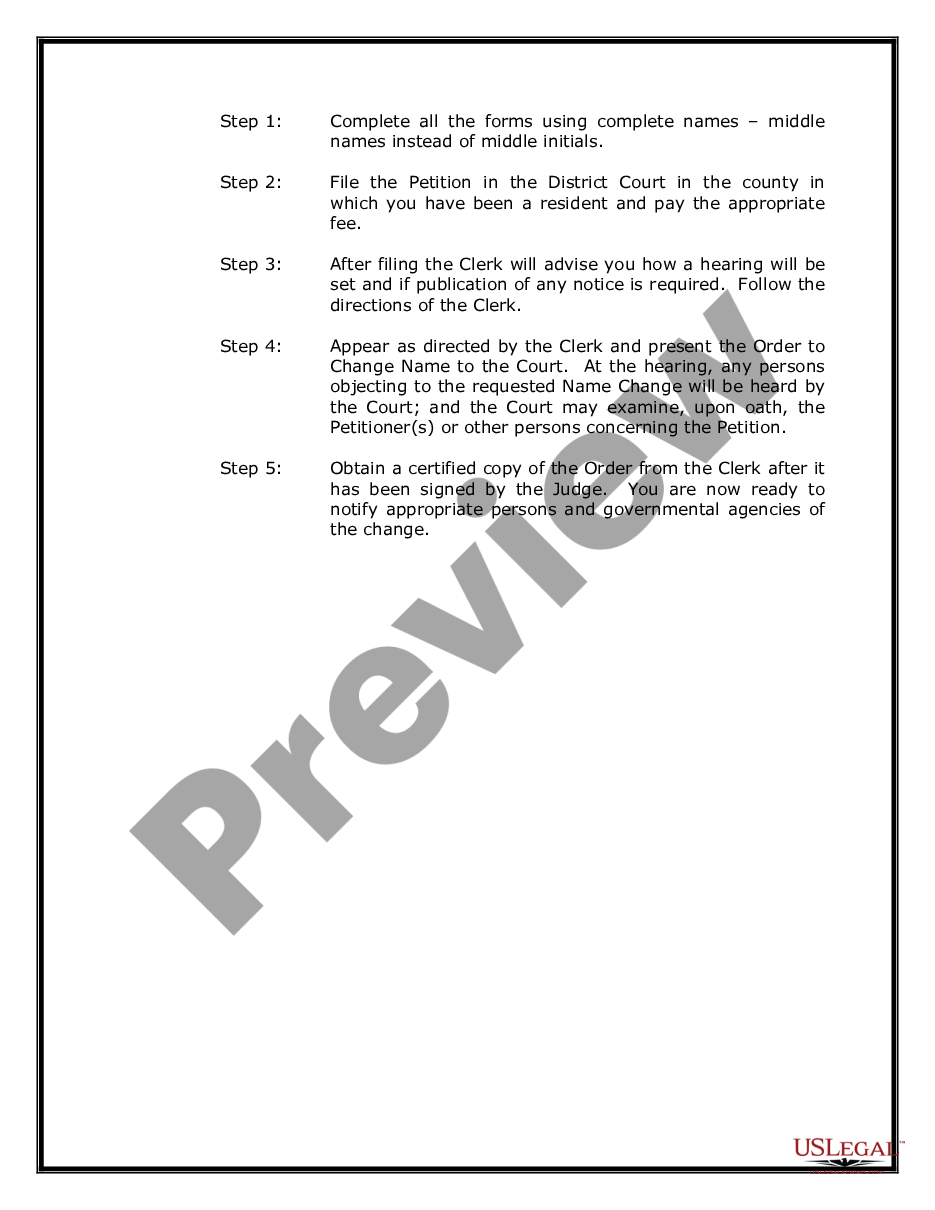 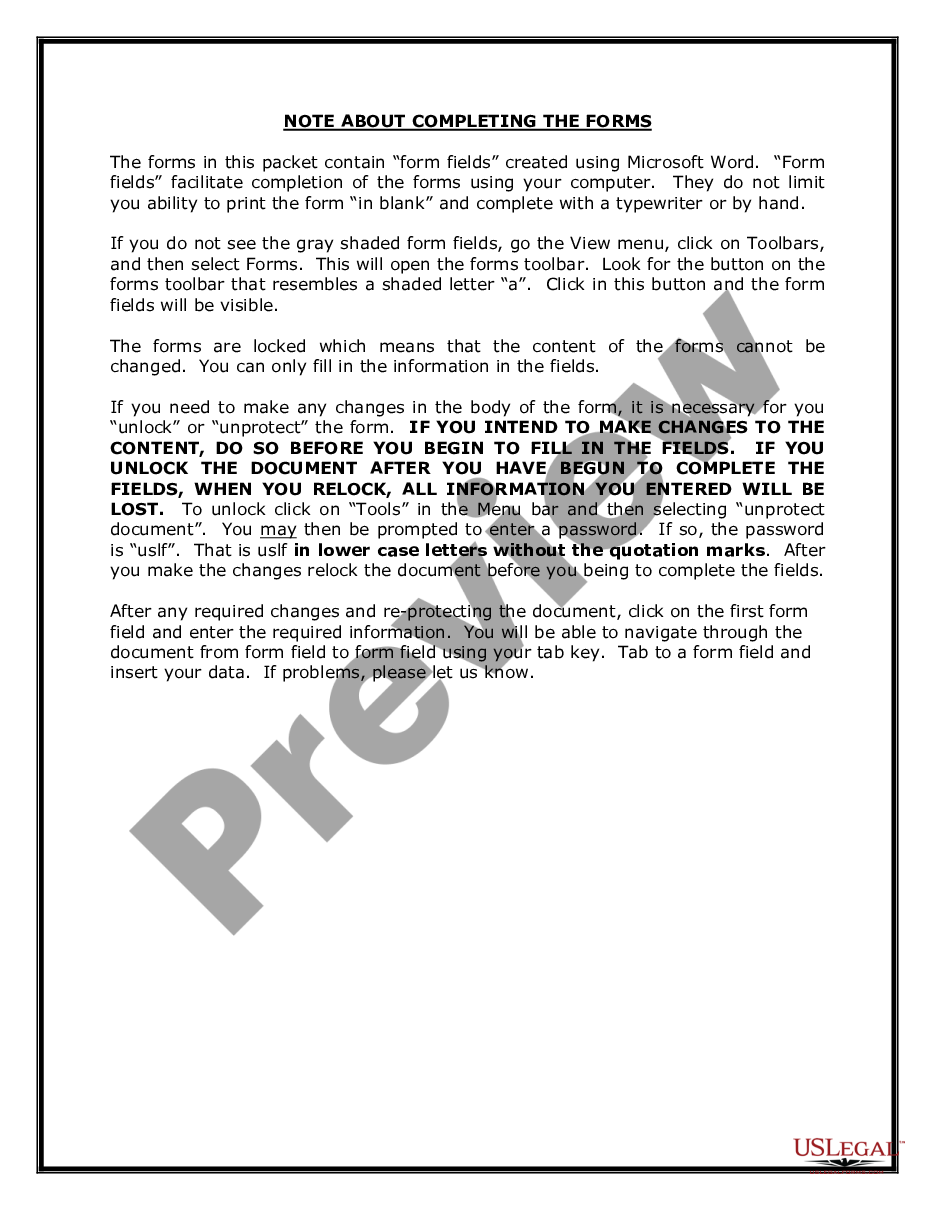 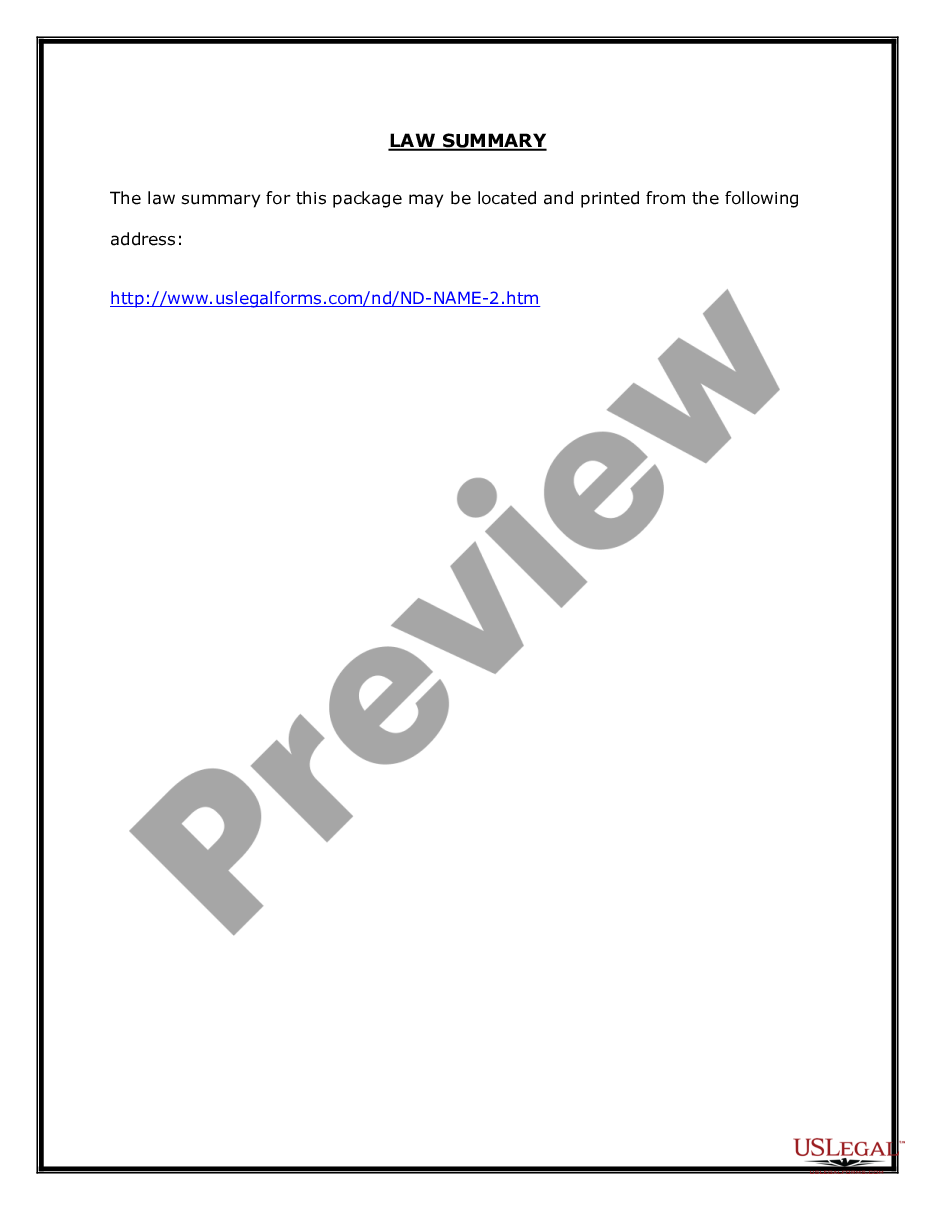 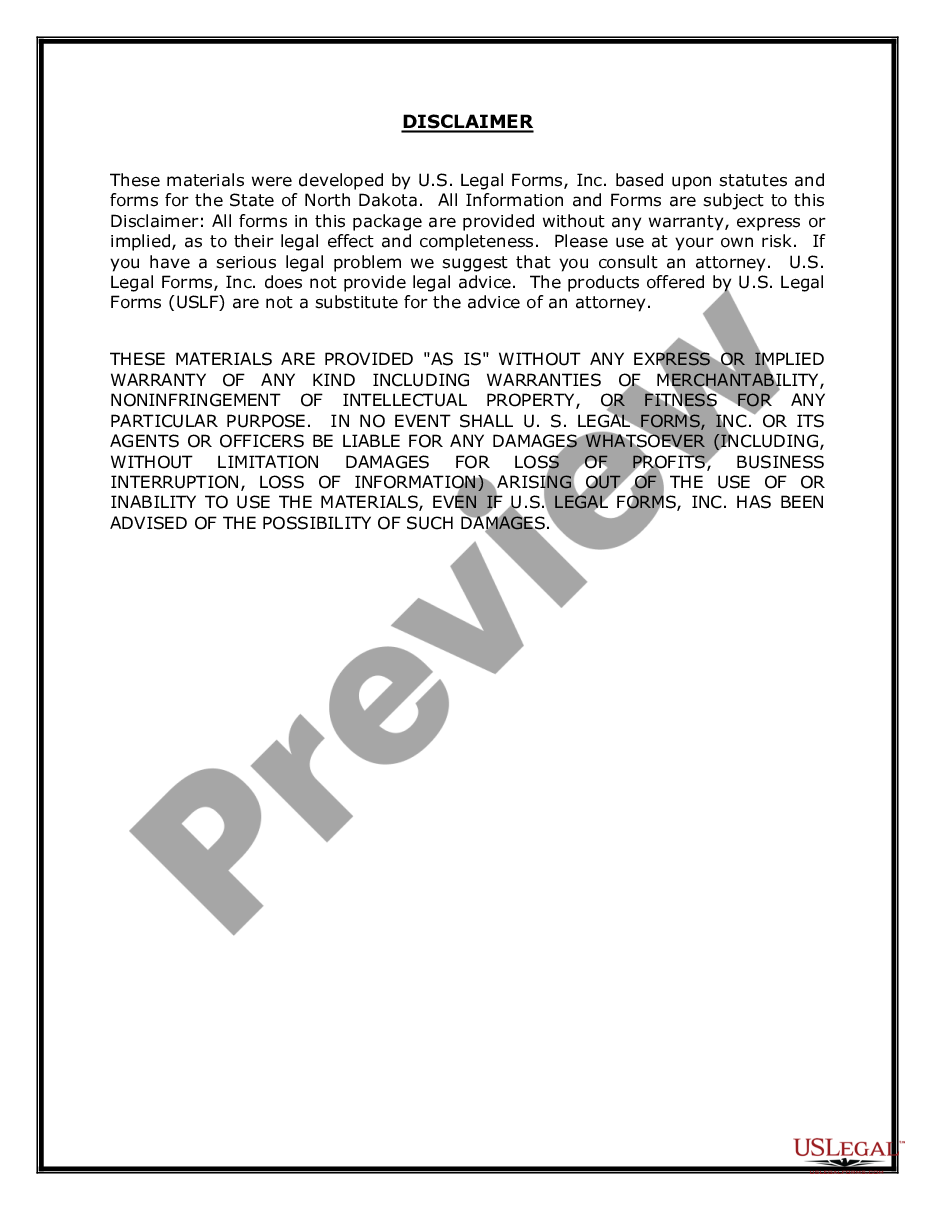 This is a Name Change Package for a minor in your state. This package contains (1) State Specific Information on Change of Name, (2) Steps to Change your Name, (3) Forms Required and (4) Access to State Specific Law Summary. Your Satisfaction is Guaranteed or Your Money Back!

How To Fill Out North Dakota Name Change Instructions And Forms Package For A Minor?

Avoid pricey lawyers and find the North Dakota Name Change Instructions and Forms Package for a Minor you want at a affordable price on the US Legal Forms site. Use our simple groups functionality to look for and obtain legal and tax files. Read their descriptions and preview them prior to downloading. Additionally, US Legal Forms provides users with step-by-step instructions on how to obtain and fill out each template.

US Legal Forms subscribers merely have to log in and obtain the specific form they need to their My Forms tab. Those, who have not got a subscription yet need to follow the guidelines below:

After downloading, you can fill out the North Dakota Name Change Instructions and Forms Package for a Minor manually or by using an editing software program. Print it out and reuse the template multiple times. Do more for less with US Legal Forms!

Can you change your entire name?

Note: In California, you generally have the legal right to change your name simply by using a new name in all aspects of your life, also known as the "usage method." BUT, with few exceptions, government agencies require a court order as official proof of a name change so getting a court order is the best way to make

How much does it cost to publish a name change?

How do I completely change my name?

How do you change your name for free?

The Social Security Administration has its own form which you can get for free. The good folks at SSI will also let the IRS know about the name change, so you're good to go. When you go to the DMV, you'll just need to bring the certified copy of the marriage certificate and you'll be done.

How much does it cost to change your name in North Dakota?

File your completed name change documents with the Clerk of District Court in the North Dakota county where you have resided for at least 6 months before filing the Petition. NOTE: YOU'LL BE ASKED TO PAY AN $80.00 FILING FEE.

How do I change my name in North Dakota?

To legally change your name in North Dakota, you must file a petition with the District Court of the county in which you have been a bonafide resident during the past six (6) months. Furthermore, you must be at least eighteen (18) years old and a citizen or permanent resident alien of the United States.

Can I change my last name in a different state?

You can Petition in another California County if you have multiple residences, as some people do. Regardless which County processes your Name Change Petition, if Granted, the Court Order can be used to change your ID and Official Records in any other state and with the Federal Government too.

Is changing your first name illegal?

The process to legally change your name is the same whether you want to change your first or last name. Although the steps vary by state, almost every state requires you to file a petition with the county court where you live, seeking the court's permission for your proposed change.

How do I change my name permanently?

An affidavit duly signed by the applicant and attested by Judicial Magistrate/Notary. Original newspaper in which name change ad is given. Prescribed proforma (should be computer typed and not handwritten) with signatures of applicant and two witnesses.

Note: This summary is not intended to be an all inclusive discussion of the law applicable to an action for change of name in the State of North Dakota, but does include basic and other provisions.

Name Change Action Allowed: In North Dakota, a person may change their name by filing an action in the District Court with appropriate forms.

Who is an adult? A person who has attained the age of 18 years is considered an adult.

Who is a minor? A person who has not attained the age of 18 years is considered a minor.

Is there any reason why a person might not be allowed to change his or her name? Yes. The court may not find (1) that Petitioner has been a resident of the county for at least six months prior to filing the Petition; or, (2) that there exists proper and reasonable cause for changing the name of the petitioner, or, (3) that thirty days' previous notice of the intended application has been given in the official newspaper of the county in which the petitioner resides; or, (4) that the allegations of the petition are true. A person is not allowed to change their name in order to avoid judgments or legal actions against him or her, or to avoid debts and obligations. A person can not change their name to defraud any person.

Must the child agree to the name change? No, but the court may consider the wishes of a child old enough to express their wishes in considering whether to grant the Petition.

Must the parent(s) of the minor agree to the name change? No, but the court may consider their wishes when considering whether to grant the Petition.

Requirements for Name Change Order: For an order of name change to be granted, the court must find compliance with the statutory requirements, that proper and reasonable cause for the name change exists and that it is consistent with the public interest. A change of name upon marriage, dissolution, or divorce meets these requirements.

Is Publication of a Notice Required? Yes. Notice of the filing of the petition with a statement of the relief requested and the date of future filing must be published in the official newspaper of the county in which Petitioner resides.

Who must be provided notice of the Petition? The general public by publication in a newspaper designated by the court as being the newspaper for publication of official notice.

Can individuals object to my Petition for Name Change? Yes. Any reasonable objections made to the court may influence the court's findings as to whether proper and reasonable cause for the change exists and whether the change of name is consistent with the public interest.

After Notice has been published and the thirty days has elapsed and the Petition is filed, the Court may proceed to order the change of name.

Change of name of person - Petition:

1. Any person desiring to change that person's name may file a petition in the district court of the county in which the person is a resident, setting forth:
a. That the petitioner has been a bona fide resident of the county for at least six months before the filing of the petition.
b. The reason for which the change of the petitioner's name is sought.
c. The name requested.
2. The judge of the district court, upon being duly satisfied by affidavit or proof in open court of the truth of the allegations set forth in the petition, that there exists proper and reasonable cause for changing the name of the petitioner, and that thirty days' previous notice of the intended application has been given in the official newspaper of the county in which the petitioner resides, shall order a change of the name of the petitioner. Proper and reasonable cause does not exist if the court determines that the request for a name change is made to defraud or mislead, is not made in good faith, will cause injury to an individual, or will compromise public safety. The court may waive publication of the notice when the proposed change relates only to a first or given name as distinguished from a surname or upon evidence satisfactory to the court that the petitioner has been the victim of domestic violence as defined in section 14-07.1-01.
3. If the person whose name is to be changed is a minor, the court shall consider the appointment of a guardian ad litem, and notice of the intended application must be published in the official newspaper of the county in which the minor resides and, if different, the official newspaper of the county in which each of the minor's parents reside. If the minor has a noncustodial parent, a copy of the notice must be deposited in a post office in this state, postage prepaid, not later than ten days after the publication of the notice, and directed to the noncustodial parent's last reasonably ascertained post-office address. An affidavit of mailing of the notice prepared in accordance with the North Dakota Rules of Civil Procedure must be filed with the court. [N.D.Code, Title 32 Judicial Remedies, Chapter 32-28 Change of Names of Persons and Places, Sec. 32-28-02.]


Costs-Change not to affect rights or pending actions.

Minors are persons under eighteen years of age. In this code, unless otherwise specified, the term child means minor. Age must be calculated from the first minute of the day on which persons are born to the same minute of the corresponding day completing the period of minority.[N.D.Code, Title 14 Domestic Relations and Persons, Chapter 14-10 Minors, Sec. 14-10-01.]