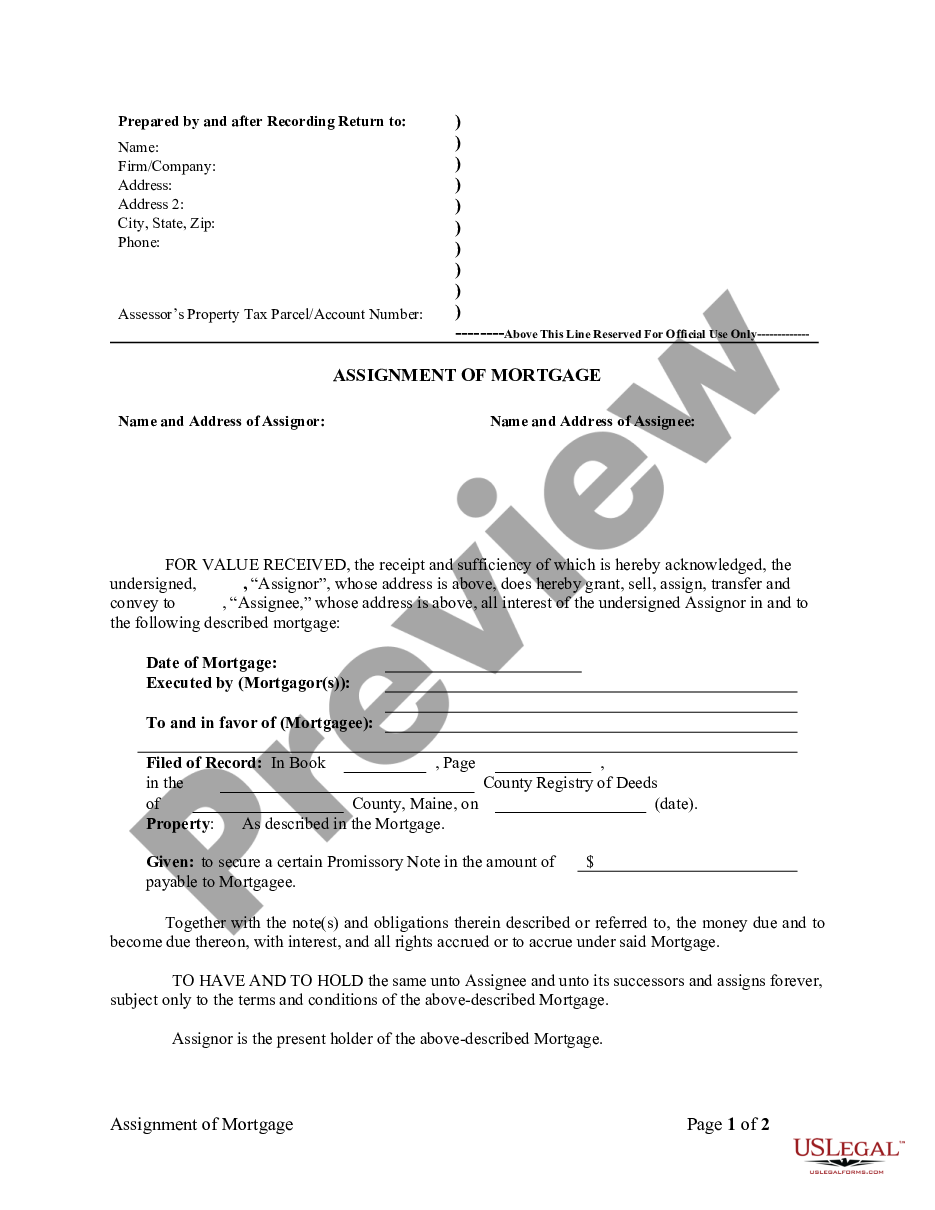 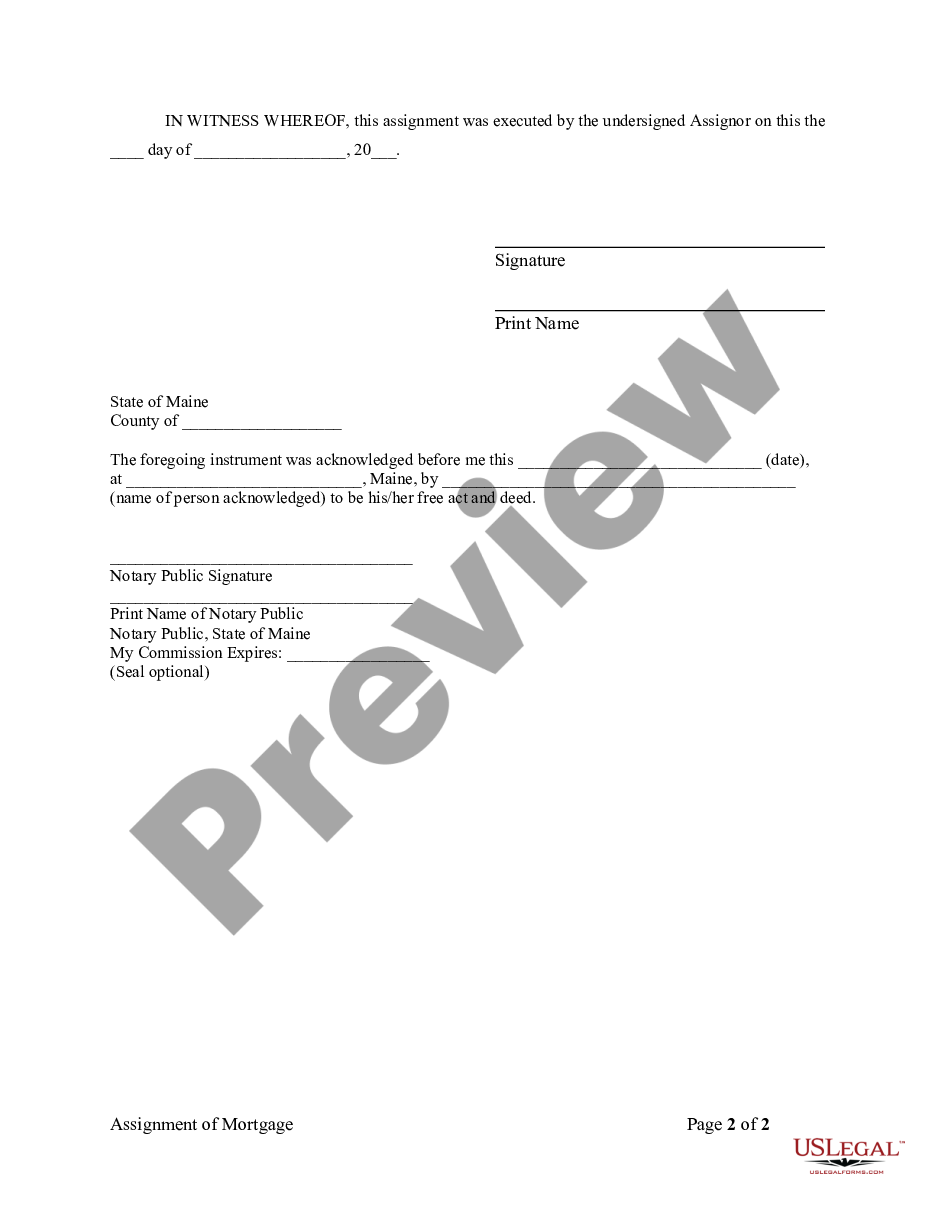 How To Fill Out Maine Assignment Of Mortgage By Individual Mortgage Holder?

You are welcome to the greatest legal documents library, US Legal Forms. Right here you can find any sample including Maine Assignment of Mortgage by Individual Mortgage Holder templates and download them (as many of them as you want/need to have). Prepare official documents in just a couple of hours, rather than days or even weeks, without spending an arm and a leg on an legal professional. Get the state-specific sample in a few clicks and feel assured understanding that it was drafted by our qualified lawyers.

If you’re already a subscribed user, just log in to your account and click Download next to the Maine Assignment of Mortgage by Individual Mortgage Holder you require. Due to the fact US Legal Forms is web-based, you’ll generally have access to your saved templates, no matter the device you’re using. See them inside the My Forms tab.

If you don't have an account yet, just what are you awaiting? Check out our instructions listed below to get started:

As soon as you’ve filled out the Maine Assignment of Mortgage by Individual Mortgage Holder, send out it to your attorney for verification. It’s an extra step but a necessary one for being confident you’re fully covered. Become a member of US Legal Forms now and get access to a large number of reusable samples.

Banks often sell and buy mortgages from each other as a way to liquidate assets and improve their credit ratings. When the original lender sells the debt to another bank or an investor, a mortgage assignment is created and recorded in the public record and the promissory note is endorsed.

What does corporate assignment of mortgage mean?

What is a gap assignment of mortgage?

Purpose A gap mortgages allows funding for a property to continue while it is going through the process of selling.Documents required for a mortgage assignment are: Instead of having you pay off your old loan with money from your new lender, your original lender assigns your loan balance to the new one.

What happens if mortgage is not recorded?

Does an assignment of mortgage have to be recorded?

Who holds the title to real property when a mortgage is given?

In title theory states, a lender holds the actual legal title to a piece of real estate for the life of the loan while the borrower/mortgagor holds the equitable title.

Who holds the title deeds on a mortgaged property?

The title deeds to a property with a mortgage are usually kept by the mortgage lender. They will only be given to you once the mortgage has been paid in full.

What does assignment mean and why would a lender want to assign a mortgage loan?

Does a private mortgage have to be recorded?

You will need to sign a promissory note and a mortgage or trust deed.The document should be signed and dated by the borrower, and you will need to file or record the document at the local recorder of deeds office or other office responsible for the filing of real estate documents.

Execution of Assignment or Satisfaction:

Must be signed by the mortgagee.

Demand to Satisfy: None required. Mortgagee has 60 days from payoff of mortgage to record satisfaction or else suffer liability.

Recording Satisfaction: A mortgage only may be discharged by a written instrument acknowledging the satisfaction thereof and signed and acknowledged by the mortgagee or by the mortgagee's duly authorized officer or agent, personal representative or assignee.

Penalty: If a satisfied mortgage is not recorded as such by mortgagee within 60 days following satisfaction thereof, mortgagee becomes liable to aggreived parties for damages equal to exemplary damages of $200 per week after expiration of the 60 days, up to an aggregate maximum of $5,000 for all aggrieved parties or the actual loss sustained by the aggrieved party, whichever is greater, and attorney fees.

§ 551. Entry on record; neglect to discharge

Within 60 days after full performance of the conditions of the mortgage, the mortgagee shall record a valid and complete release of mortgage together with any instrument of assignment necessary to establish the mortgagee's record ownership of the mortgage. As used in this paragraph, the term "mortgagee" means both the owner of the mortgage at the time it is satisfied and any servicer who receives the final payment satisfying the debt. If a release is not transmitted to the registry of deeds within 60 days, the owner and any such servicer are jointly and severally liable to an aggrieved party for damages equal to exemplary damages of $200 per week after expiration of the 60 days, up to an aggregate maximum of $5,000 for all aggrieved parties or the actual loss sustained by the aggrieved party, whichever is greater. If multiple aggrieved parties seek exemplary damages, the court shall equitably allocate the maximum amount. The mortgagee is also liable for court costs and reasonable attorney's fees in any successful action to enforce the liability. The mortgagee may charge the mortgagor for any recording fees incurred in recording the release of mortgage.

With respect to a mortgage securing an open-end line of credit, the 60-day period to deliver a release commences after the mortgagor delivers to the address designated for payments under the line of credit a written request to terminate the line and the mortgage together with payment in full of all amounts secured by the mortgage. The mortgagee may designate in writing a different address for delivery of written notices under this paragraph.

All discharges of recorded mortgages, attachments or liens of any nature must be recorded by a written instrument, and except for termination statements filed pursuant to Title 11, section 9-404, acknowledged in same manner as other instruments presented for record and no such discharges may be permitted by entry in the margin of the instrument to be discharged.

All discharges of recorded mortgages, attachments or liens of any nature must be recorded by a written instrument and, except for termination statements filed pursuant to Title 11, section 9-1513, acknowledged in same manner as other instruments presented for record and no such discharges may be permitted by entry in the margin of the instrument to be discharged.

All marginal discharges of mortgages recorded prior to April 1, 1974, duly attested by the register of deeds as being recorded from discharge in margin of original mortgage, are validated and have the same effect as if made as provided in section 551.

A. The affiant is an attorney-at-law in good standing and licensed to practice in the State;

B. The affidavit is made at the request of the mortgagor or the mortgagor's executor, administrator, successor, assignee or transferee or the transferee's mortgagee;

C. The mortgagee has provided a payoff statement with respect to the loan secured by the mortgage;

E. More than 30 days have elapsed since the payment was received by the mortgagee; and

F. The mortgagee has received written notification by certified mail 15 days in advance, sent to the mortgagee's last known address,that the affiant intends to execute and record an affidavit in accordance with this section, enclosing a copy of the proposed affidavit; the mortgagee has not delivered a discharge or deed of release in response to the notification; and the mortgagor has complied with any request made by the mortgagee for additional payment at least 15 days before the date of the affidavit.

3. Copy. The affiant shall attach to the affidavit the following, certifying that each copy is a true copy of the original document:

A. Photostatic copies of the documentary evidence that payment has been received by the mortgagee, including the mortgagee's endorsement of a bank check, certified check or attorney client funds account check; and

B. A photostatic copy of the payoff statement if that statement is made in writing.

4. Effect. An affidavit recorded under this section has the same effect as a recorded discharge.

5. Exception. A mortgage may not be discharged as provided by this section if the holder of the mortgage at the time a discharge is sought is a financial institution or credit union authorized to do business in the State as defined in Title 9-B, section 131, subsection 12-A or 17-A.