No Kids No Property Texas Divorce 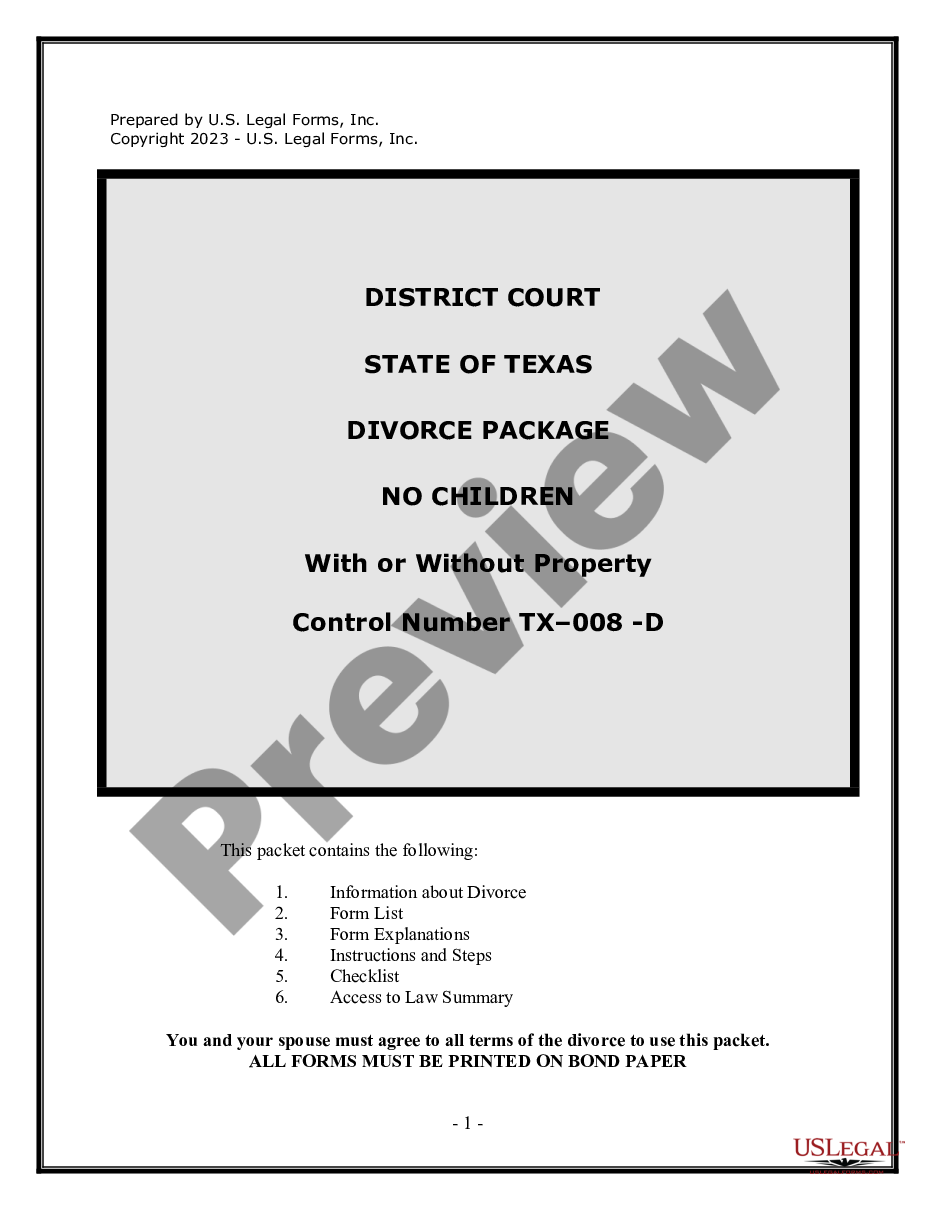 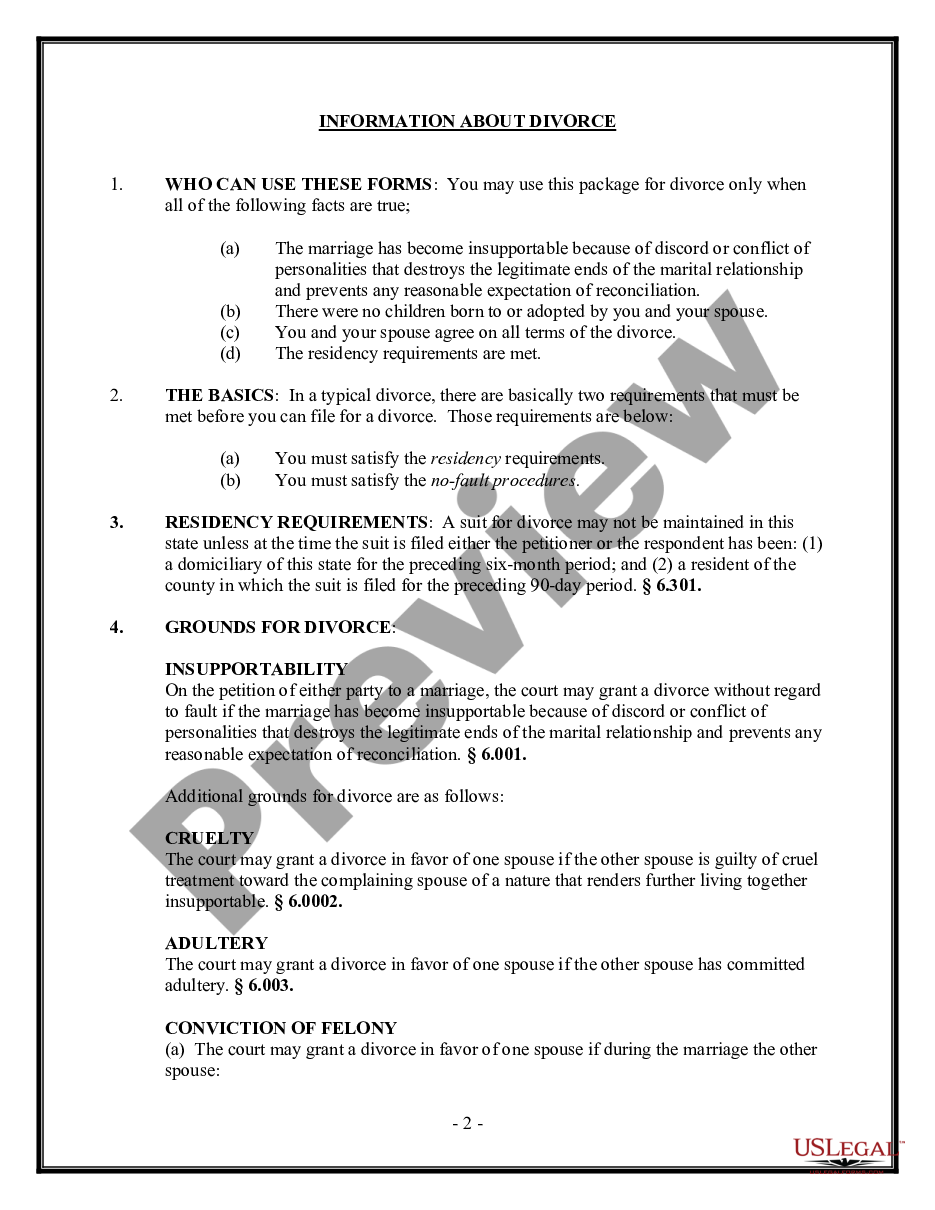 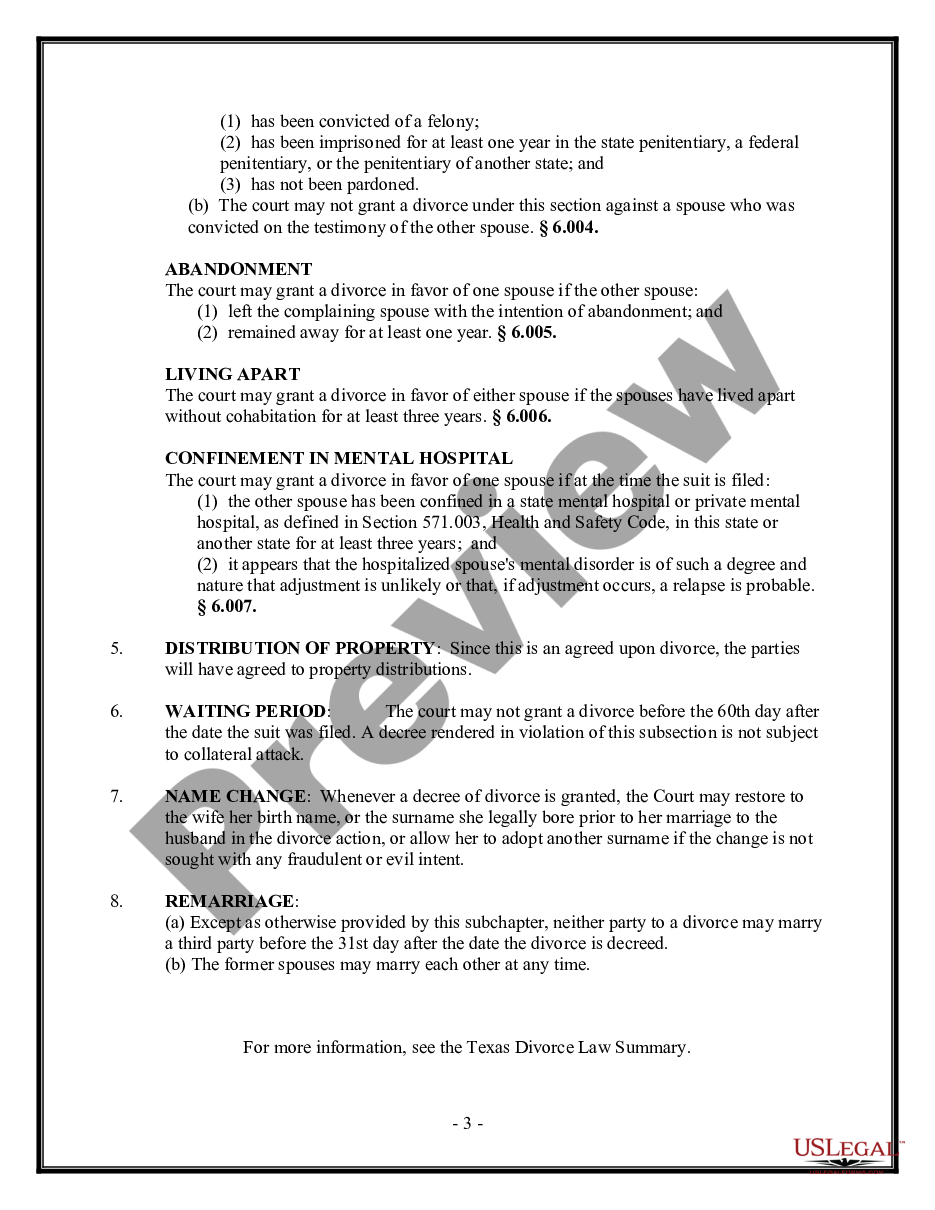 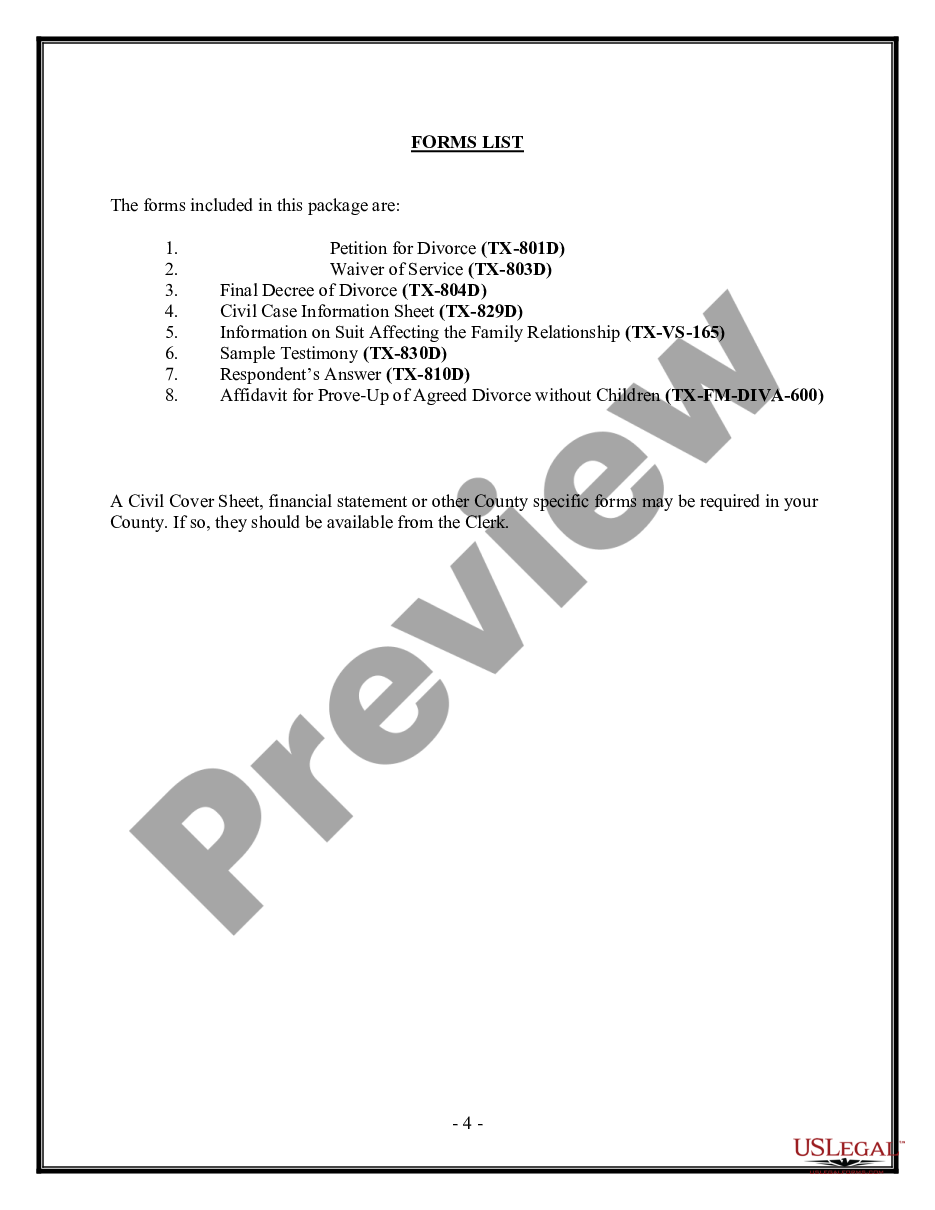 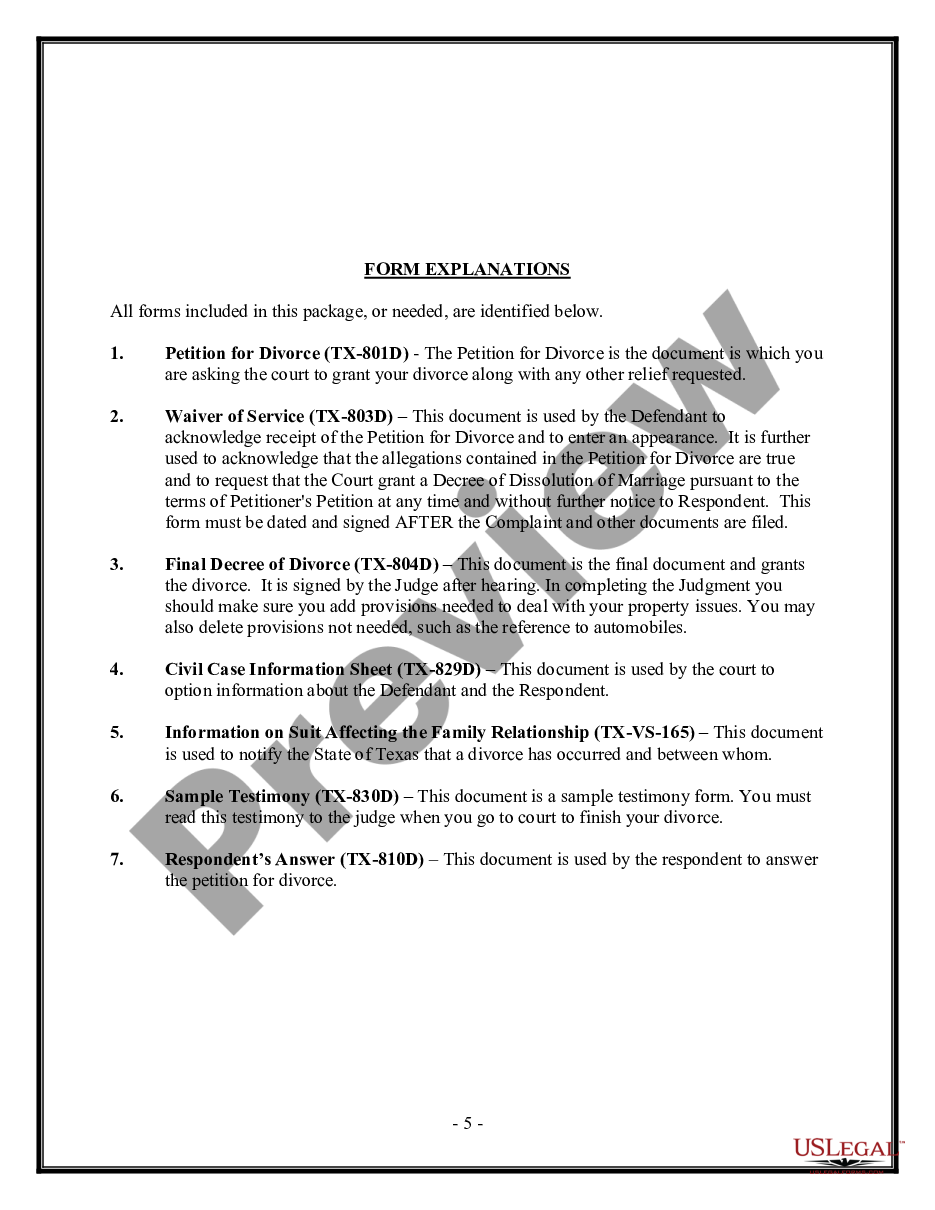 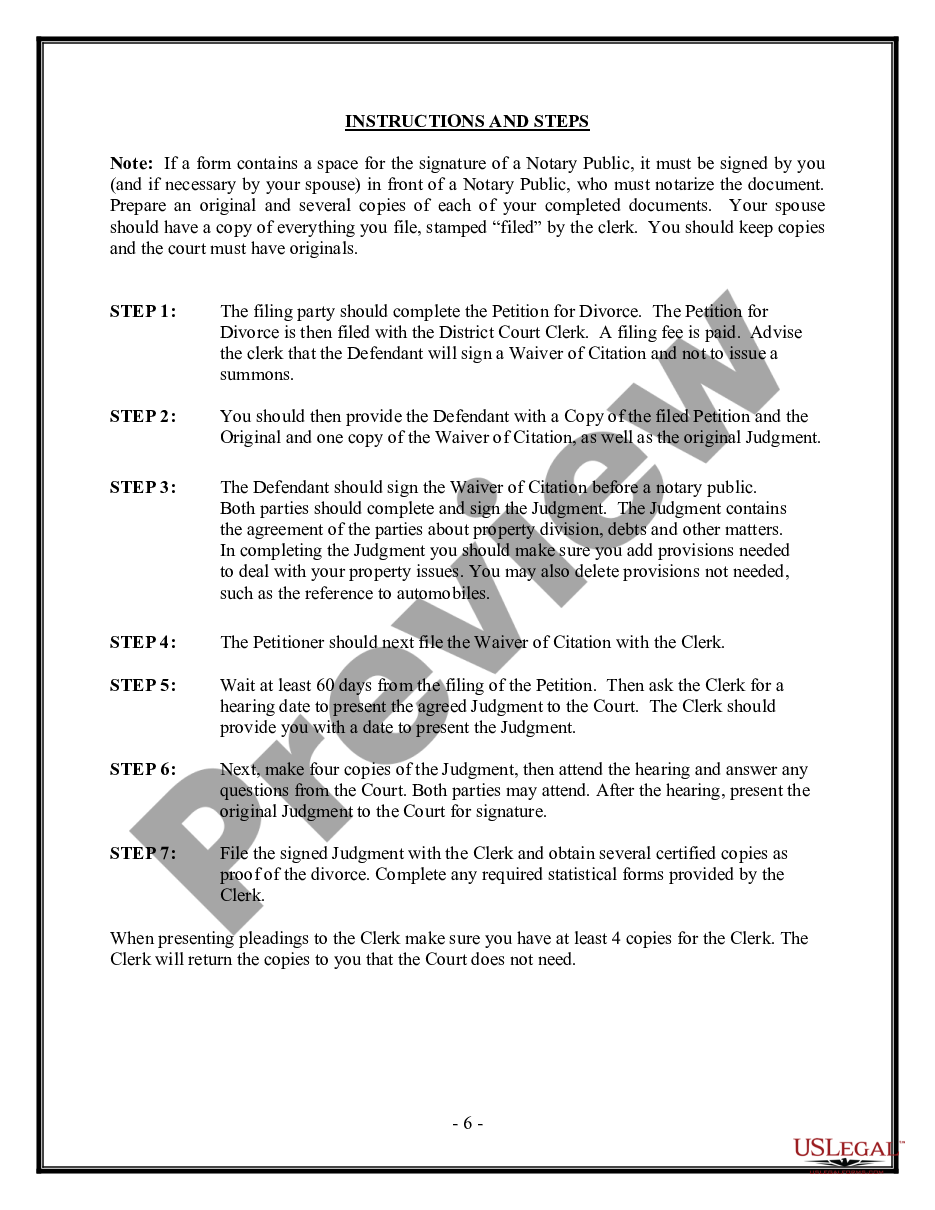 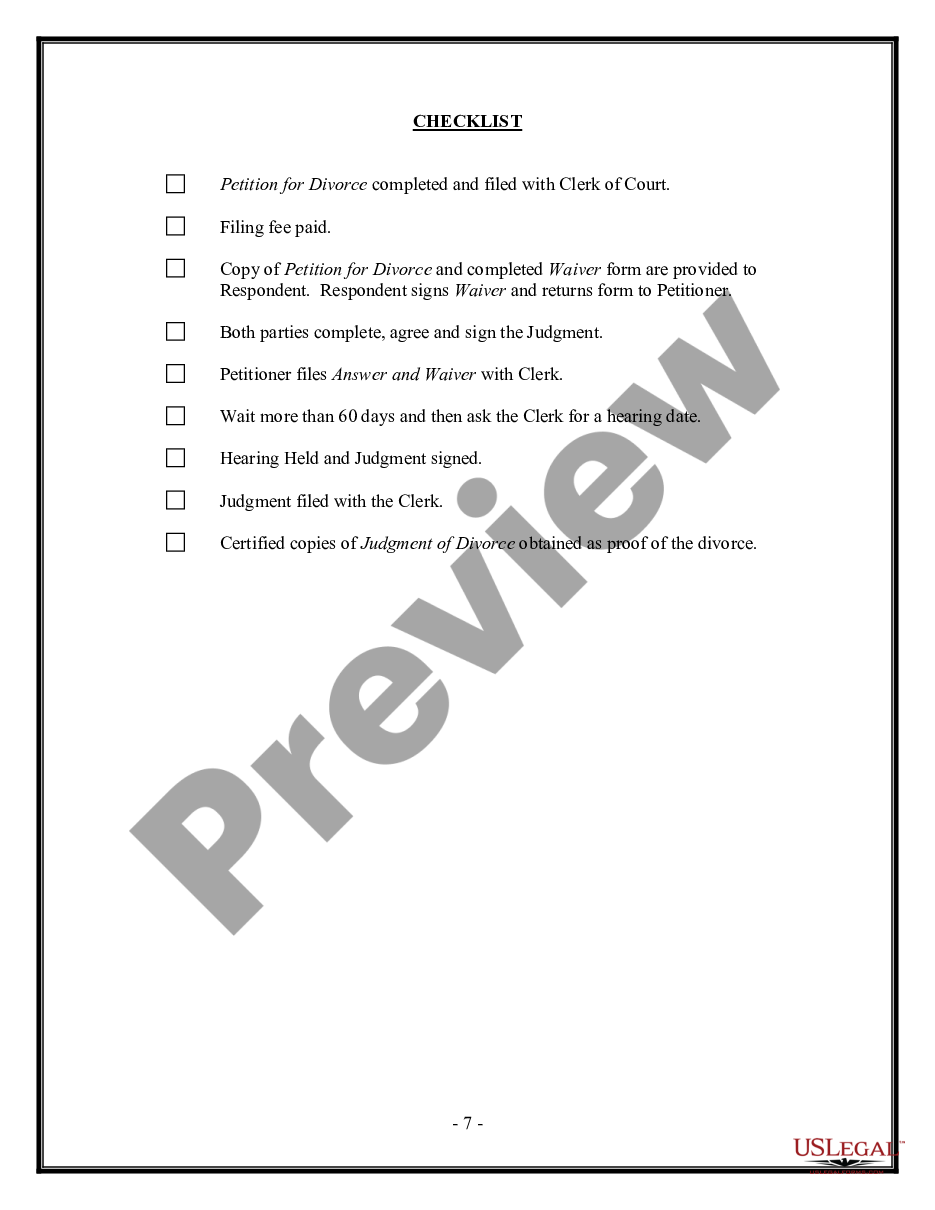 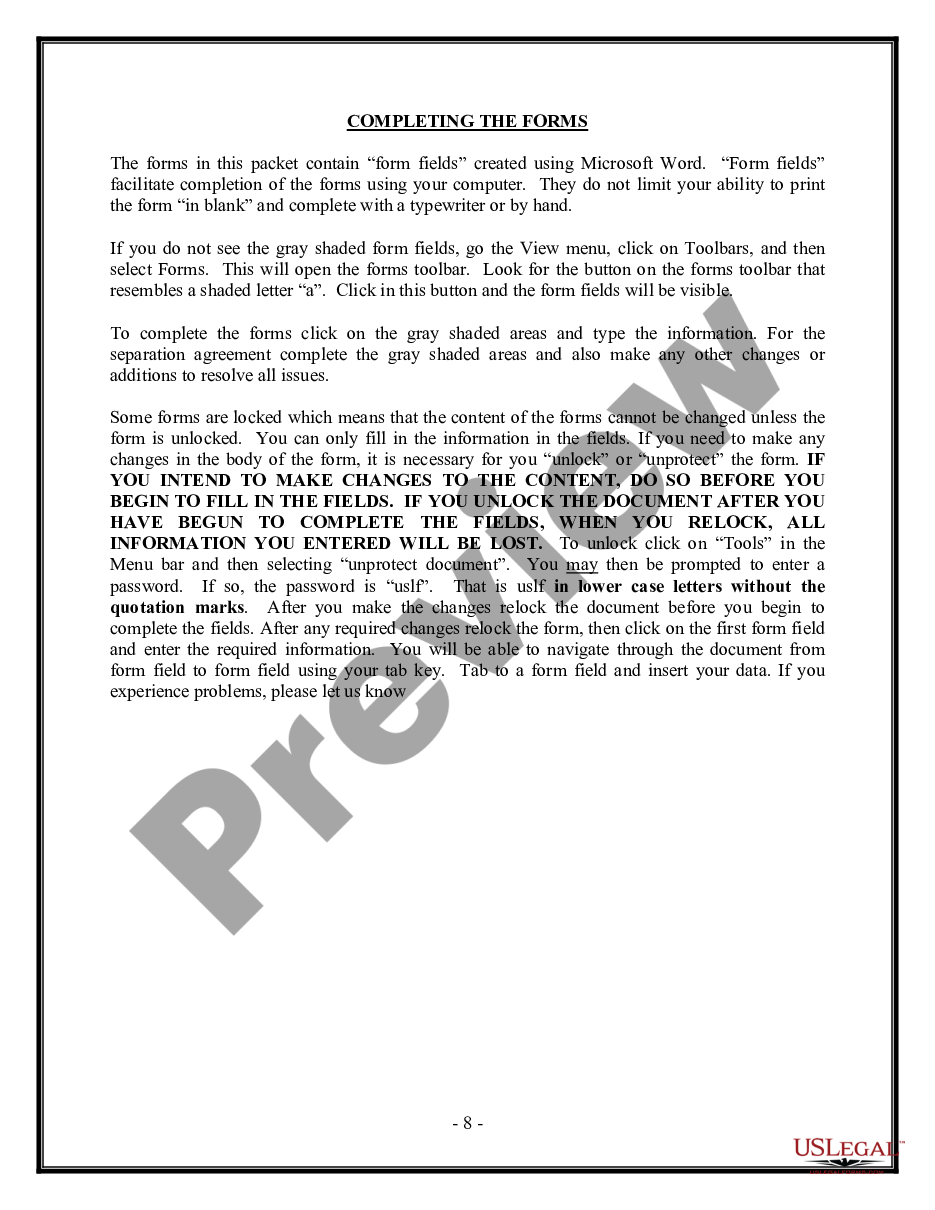 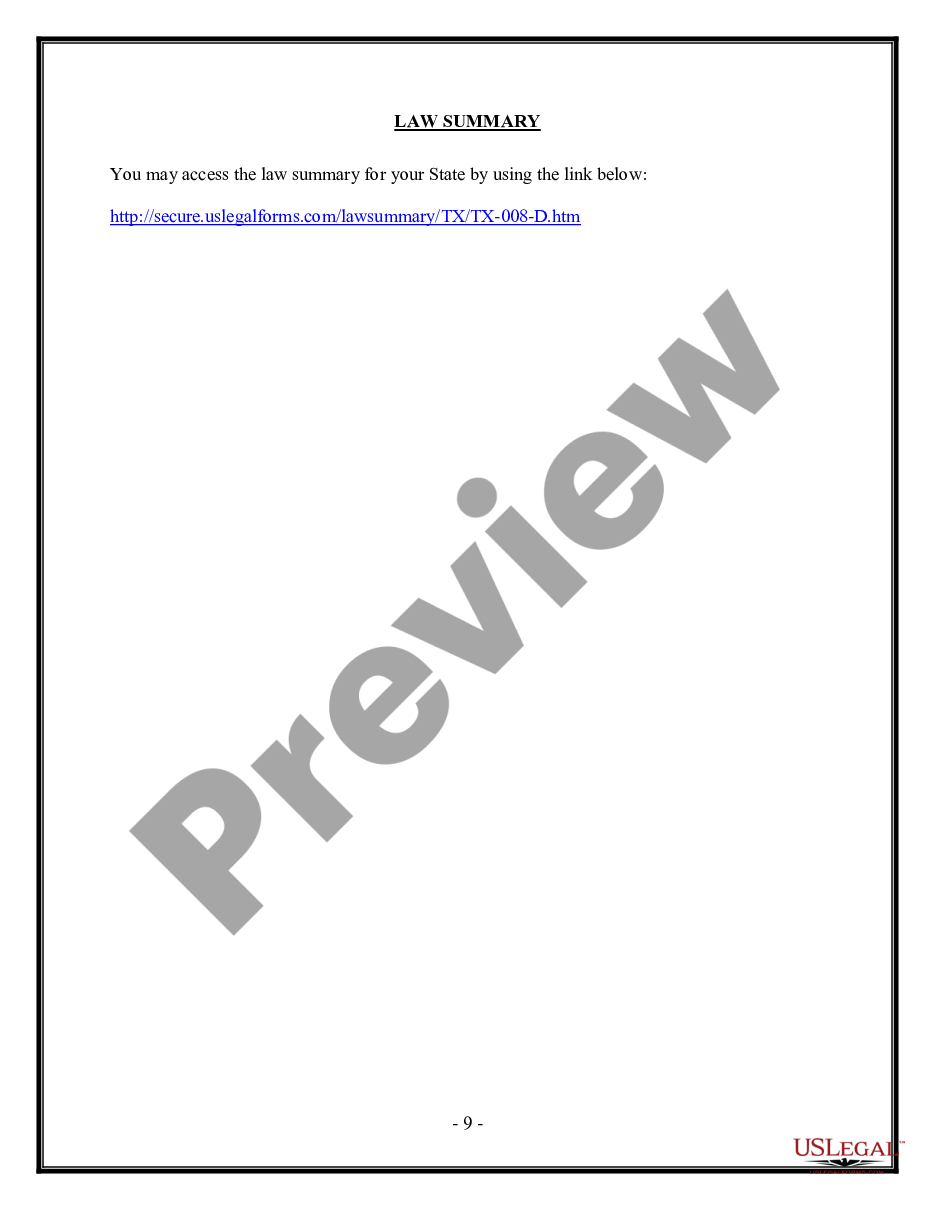 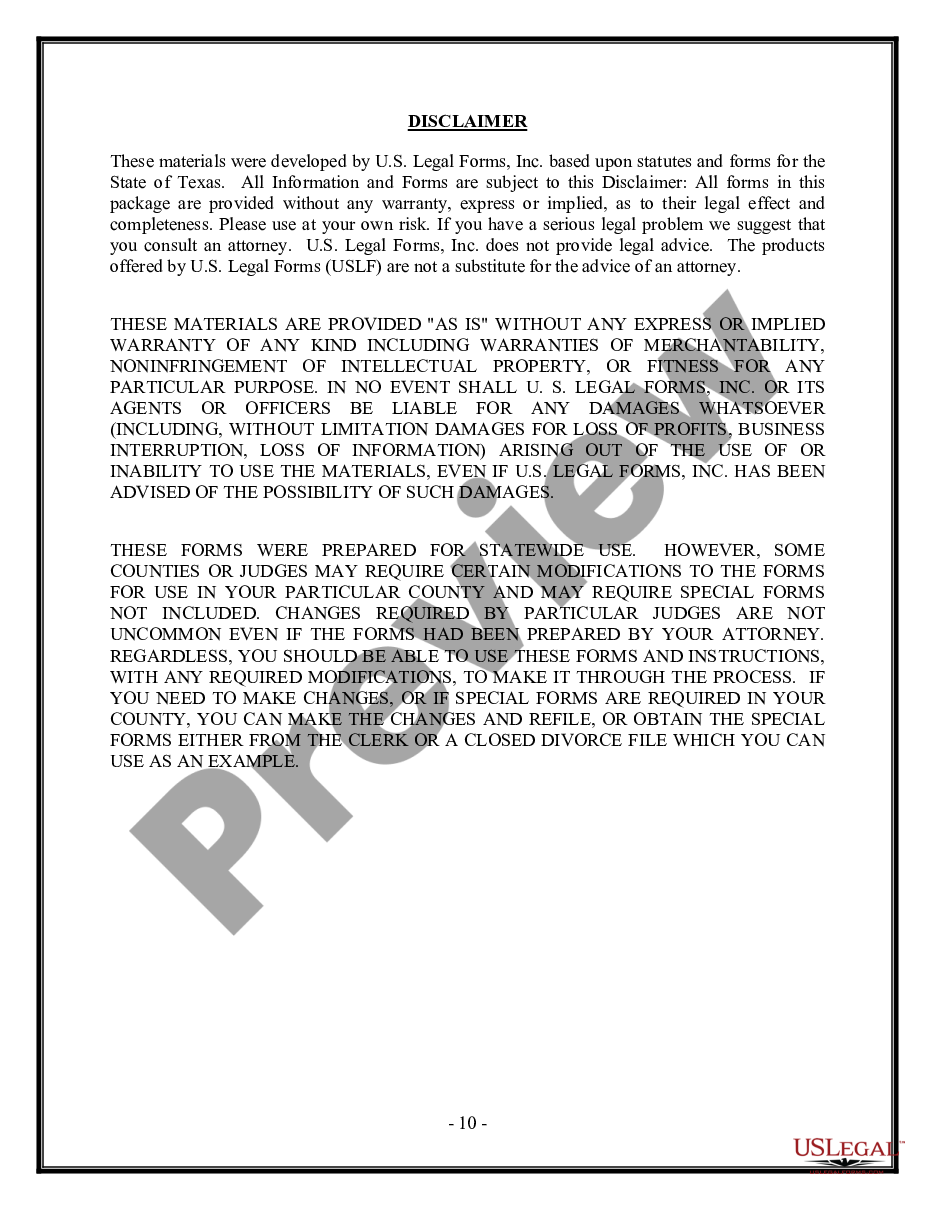 This No-Fault Agreed Uncontested Divorce Package specifically designed for Persons without Children and with or without Property and/or Debts includes (1) Information about Divorce, (2) Forms List, (3) Forms Explanations, (4) Instructions and Steps, (5) Checklist, (6) Forms and (7) Access to Divorce Law Summary for your State. The forms include the required petition or complaint, waiver and final decree.

Not valid for Harris County

How To Fill Out Blank Divorce Forms?

Access to quality Texas No-Fault Agreed Uncontested Divorce Package for Dissolution of Marriage for Persons with No Children with or without Property and Debts samples online with US Legal Forms. Avoid days of misused time looking the internet and dropped money on files that aren’t updated. US Legal Forms gives you a solution to just that. Get over 85,000 state-specific legal and tax samples that you could save and fill out in clicks within the Forms library.

For individuals who don’t have a subscription yet, take a look at our how-guide listed below to make getting started easier:

You can now open the Texas No-Fault Agreed Uncontested Divorce Package for Dissolution of Marriage for Persons with No Children with or without Property and Debts template and fill it out online or print it and get it done by hand. Think about mailing the document to your legal counsel to make certain everything is completed appropriately. If you make a error, print and fill sample once again (once you’ve registered an account all documents you save is reusable). Make your US Legal Forms account now and access much more forms.

All forms provided by US Legal Forms, the nations leading legal forms publisher. When you need Mississippi Divorce No Children Packages, don't accept anything less than the USlegal™ brand. "The Forms Professionals Trust ™

No Fault Devorce Other Form Names

Can you get divorced without the other person agreeing?

The fact is that California is a no fault state and you do not need your spouse's signature in order to get a divorce.If your spouse fails to file and serve you with a response, you can file a request for default against your spouse after 30 days. You can also file a proposed judgment for the court to approve.

Can I get a divorce without my spouse's signature in Texas?

The answer, at least here in Texas, is that no, your spouse does not have to sign the papers. Sometimes there are papers your spouse may choose to sign; but there is no requirement under Texas law that your spouse must sign anything for you to obtain a divorce.

Do I have to go to court for uncontested divorce Texas?

What is a wife entitled to in a divorce in Texas?

Along with a handful of other states, Texas is a community property statemeaning all income earned and property acquired by either spouse during the marriage is community property and belongs to both spouses equally. In Texas, courts must split all marital property equally between divorcing spouses.

Can a divorce be finalized without both signatures in Texas?

The quick answer is no, your spouse does not have to sign the papers in order for a divorce decree to be finalized. However, this makes your divorce contested rather than uncontested, which tends to drag the process out longer.In Texas, refusing to sign divorce papers will not stop a final divorce decree.

How much does an uncontested divorce cost in Texas?

How Much Does It Cost to File for Divorce in Texas? When you file for divorce in Texas, you will be required to pay a filing fee of between $250 to $300. If you cannot afford to pay the filing fee, you can complete an Affidavit of Inability of Pay.

How long does an uncontested divorce take in Texas?

In Texas, the fastest most people can get divorced is sixty days. That means within sixty days of filing your petition for divorce you would be able to present a Final Decree of Divorce to your judge that is signed by you and your spouse.

How does uncontested divorce work in Texas?

On the petition of either party to a marriage, the court may grant a divorce without regard to fault if the marriage has become insupportable because of discord or conflict of personalities that destroys the legitimate ends of the marital relationship and prevents any reasonable expectation of reconciliation.

A suit for divorce may not be maintained in this state unless at the time the suit is filed either the petitioner or the respondent has been:

(a) A petition in a suit for dissolution of a marriage is sufficient without the necessity of specifying the underlying evidentiary facts if the petition alleges the grounds relied on substantially in the language of the statute.
(b) Allegations of grounds for relief, matters of defense, or facts relied on for a temporary order that are stated in short and plain terms are not subject to special exceptions because of form or sufficiency.
(c) The court shall strike an allegation of evidentiary fact from the pleadings on the motion of a party or on the court's own motion.
6.403. Answer


The respondent in a suit for dissolution of a marriage is not required to answer on oath or affirmation.

(a) A party to a suit for the dissolution of a marriage may waive the issuance or service of process after the suit is filed by filing with the clerk of the court in which the suit is filed the waiver of the party acknowledging receipt of a copy of the filed petition.
(b) The waiver must contain the mailing address of the party who executed the waiver.
(c) The waiver must be sworn but may not be sworn before an attorney in the suit.
(d) The Texas Rules of Civil Procedure do not apply to a waiver executed under this section.

(a) A party to a proceeding under this title shall include in the first pleading filed by the party in the proceeding the following statement: "I AM AWARE THAT IT IS THE POLICY OF THE STATE OF TEXAS TO PROMOTE THE AMICABLE AND NONJUDICIAL SETTLEMENT OF DISPUTES INVOLVING CHILDREN AND FAMILIES. I AM AWARE OF ALTERNATIVE DISPUTE RESOLUTION METHODS, INCLUDING MEDIATION. WHILE I RECOGNIZE THAT ALTERNATIVE DISPUTE RESOLUTION IS AN ALTERNATIVE TO AND NOT A SUBSTITUTE FOR A TRIAL AND THAT THIS CASE MAY BE TRIED IF IT IS NOT SETTLED, I REPRESENT TO THE COURT THAT I WILL ATTEMPT IN GOOD FAITH TO RESOLVE BEFORE FINAL TRIAL CONTESTED ISSUES IN THIS CASE BY ALTERNATIVE DISPUTE RESOLUTION WITHOUT THE NECESSITY OF COURT INTERVENTION."
(b) The statement prescribed by Subsection (a) must be prominently displayed in boldfaced type or capital letters or be underlined and be signed by the party.
(c) The statement prescribed by Subsection (a) is not required for:
(1) a pleading in which citation on all respondents entitled to service of citation is requested, issued, and given by publication;
(2) a motion or pleading that seeks a protective order as provided by Title 4; or
(3) a special appearance under Rule 120a, Texas Rules of Civil Procedure.

(a) Citation in a suit for dissolution of a marriage may be by publication as in other civil cases, except that notice shall be published one time only.
(b) The notice shall be sufficient if given in substantially the following form:

The Court has authority in this suit to enter any judgment or decree dissolving the marriage and providing for the division of property that will be binding on you.

(c) The form authorized in this section and the form authorized by Section 102.010 may be combined in appropriate situations.
(d) If the citation is for a suit in which a parent-child relationship does not exist, service by publication may be completed by posting the citation at the courthouse door for seven days in the county in which the suit is filed.
(e) If the petitioner or the petitioner's attorney of record makes an oath that no child presently under 18 years of age was born or adopted by the spouses and that no appreciable amount of property was accumulated by the spouses during the marriage, the court may dispense with the appointment of an attorney ad litem. In a case in which citation was by publication, a statement of the evidence, approved and signed by the judge, shall be filed with the papers of the suit as a part of the record.

(a) The court may not grant a divorce before the 60th day after the date the suit was filed. A decree rendered in violation of this subsection is not subject to collateral attack.
(b) A waiting period is not required before a court may grant an annulment or declare a marriage void other than as required in civil cases generally.

In a suit for divorce, the petition may not be taken as confessed if the respondent does not file an answer.

In a suit for dissolution of a marriage, either party may demand a jury trial unless the action is a suit to annul an underage marriage under Section 6.101 or 6.102.

(a) In a suit for dissolution of a marriage, the husband and wife are competent witnesses for and against each other. A spouse may not be compelled to testify as to a matter that will incriminate the spouse.
(b) If the husband or wife testifies, the court or jury trying the case shall determine the credibility of the witness and the weight to be given the witness's testimony.

(a) In a decree of divorce or annulment, the court shall change the name of a party specifically requesting the change to a name previously used by the party unless the court states in the decree a reason for denying the change of name.
(b) The court may not deny a change of name solely to keep the last name of family members the same.
(c) A change of name does not release a person from liability incurred by the person under a previous name or defeat a right the person held under a previous name.
(d) A person whose name is changed under this section may apply for a change of name certificate from the clerk of the court as provided by Section 45.106.

The clerk of the court shall mail a copy of the final decree of dissolution of a marriage to the party who waived service of process under Section 6.4035 by mailing the copy of the decree to the party at the mailing address contained in the waiver or to the office of the party's attorney of record.

(a) Except as otherwise provided by this subchapter, neither party to a divorce may marry a third party before the 31st day after the date the divorce is decreed.
(b) The former spouses may marry each other at any time.