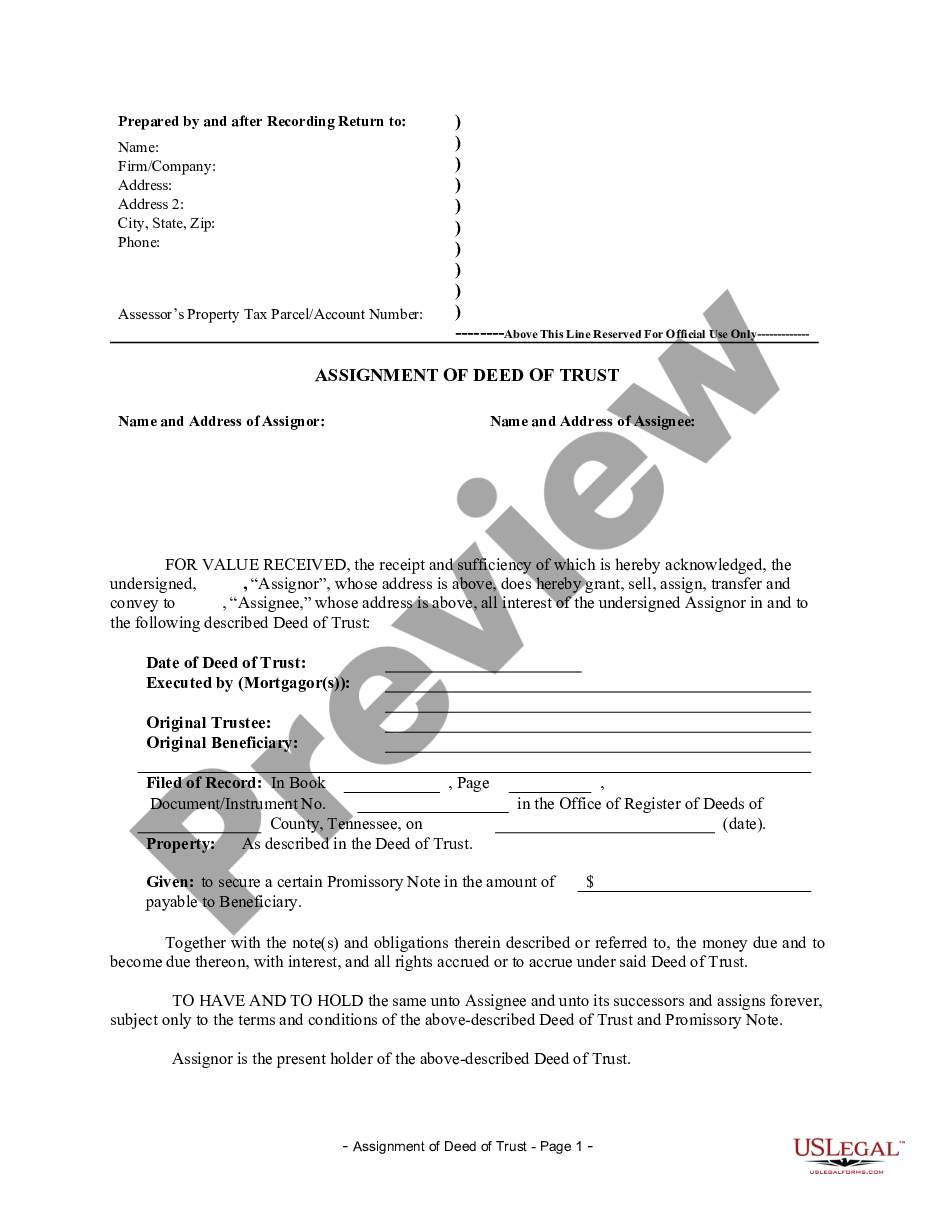 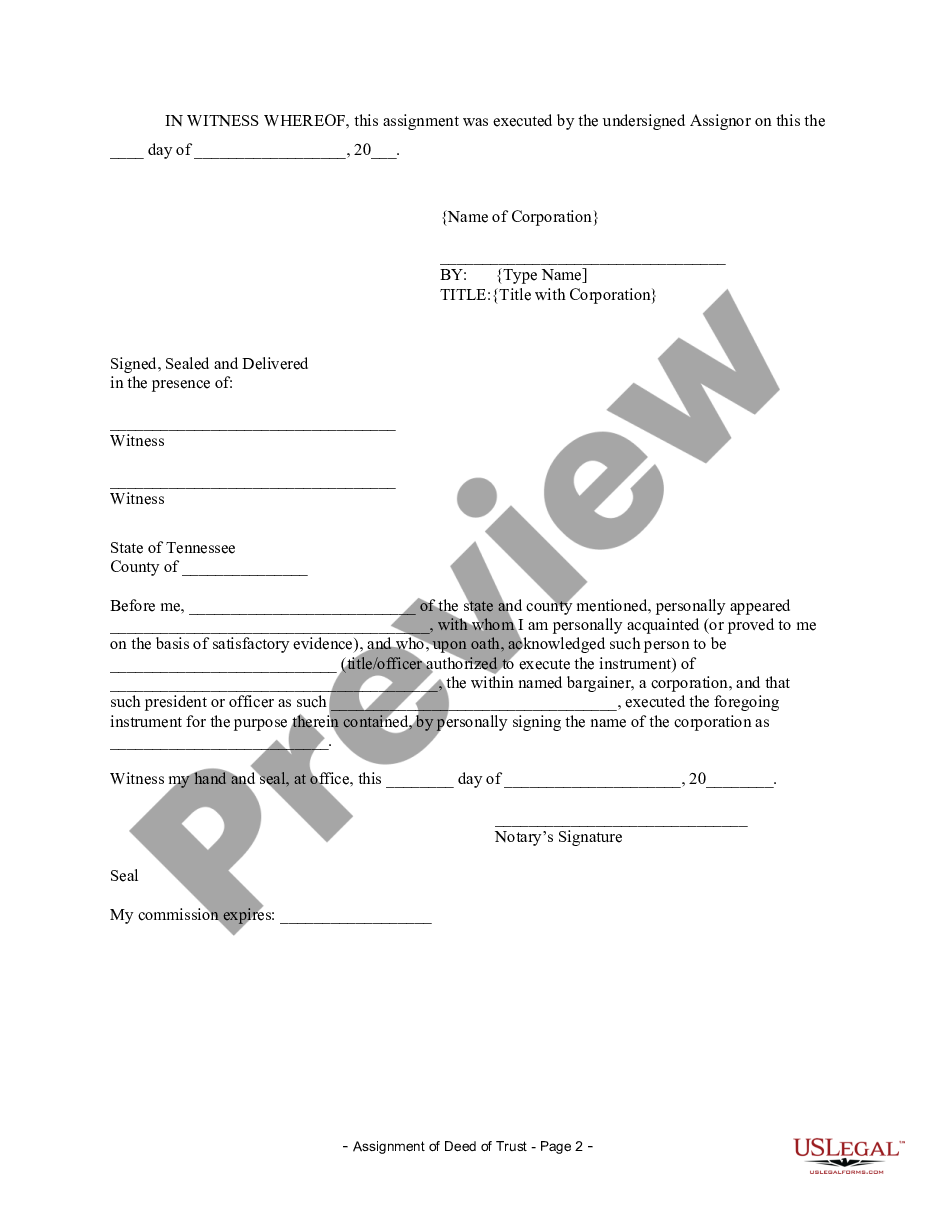 Description Assignment Of Deed Of Trust

How To Fill Out Tennessee Assignment Of Deed Of Trust By Corporate Mortgage Holder?

Get access to high quality Tennessee Assignment of Deed of Trust by Corporate Mortgage Holder forms online with US Legal Forms. Steer clear of days of misused time looking the internet and lost money on forms that aren’t updated. US Legal Forms provides you with a solution to exactly that. Get around 85,000 state-specific legal and tax templates that you could download and fill out in clicks within the Forms library.

For those who don’t have a subscription yet, check out our how-guide listed below to make getting started simpler:

You can now open the Tennessee Assignment of Deed of Trust by Corporate Mortgage Holder sample and fill it out online or print it and get it done by hand. Think about mailing the document to your legal counsel to be certain everything is completed properly. If you make a error, print and complete sample once again (once you’ve made an account every document you save is reusable). Create your US Legal Forms account now and access much more templates.

All forms provided by US Legal Forms, the nations leading legal forms publisher. When you need Corporate Assignment Of Deed Of Trust, don't accept anything less than the USlegal™ brand. "The Forms Professionals Trust ™

What Is An Assignment Deed Of Trust Form Rating

What does a deed of trust do?

In financed real estate transactions, trust deeds transfer the legal title of a property to a third partysuch as a bank, escrow company, or title companyto hold until the borrower repays their debt to the lender. Trust deeds are used in place of mortgages in several states.

Who benefits from a deed of trust?

Whether you have a deed of trust or a mortgage, they both serve to assure that a loan is repaid, either to a lender or an individual person. A mortgage only involves two parties the borrower and the lender. A deed of trust adds an additional party, a trustee, who holds the home's title until the loan is repaid.

Who can be a trustee on a deed of trust in Tennessee?

Tennessee is a deed of trust state. However, a mortgage is enforceable. The trustee must be a resident of Tennessee or a corporation domiciled in Tennessee. There is a reciprocal agreement in which a trustee can serve in Tennessee if the trustee's home state allows a Tennessee trustee to serve.

Is Tennessee a deed of trust state?

Assignment of Deed of Trust by Corporate Mortgage Holder

It is recommended that an assignment be in writing and recorded.

The Mortgagee or the legal holder of the debt secured by deed of trust or lien, who has received payment or satisfaction of the debt, must satisfy the record by a formal deed of release.

Only in counties having specific population sizes. See statutes, below.

(a) When a debt secured by a mortgage, deed of trust, or by lien retained in a deed of conveyance of land or bill of sale, or other instrument, has been fully paid or satisfied, the mortgagee, transferee, or assignee of the mortgagee or the legal holder of the debt secured by deed of trust or lien, who has received payment or satisfaction of the debt, must satisfy the record by a formal deed of release.

(a) If the holder of any debt secured by real property situated in this state fails to enter a proper release of record after having been fully paid or satisfied within forty-five (45) days from the receipt of a written request from the party making such payment, including, but not limited to, the maker, the mortgagor, the purchaser of the property covered by such instrument or any closing agent or attorney who has collected and transmitted funds for such payment, the holder of the debt shall forfeit to the party making such request the sum of one hundred dollars ($100).

(b) If the indebtedness is not released within the aforestated forty-five-day period, the party having requested the release shall again request the release, and, if after thirty (30) days from the second request, the indebtedness has not been released, the holder shall forfeit to the party making the request a sum not to exceed one thousand dollars ($1,000).

(c) In the event suit is instituted to collect either or both of the forfeitures, the holder shall also be liable to the party instituting suit for all reasonable expenses, attorney fees, and the court costs incurred in the action.