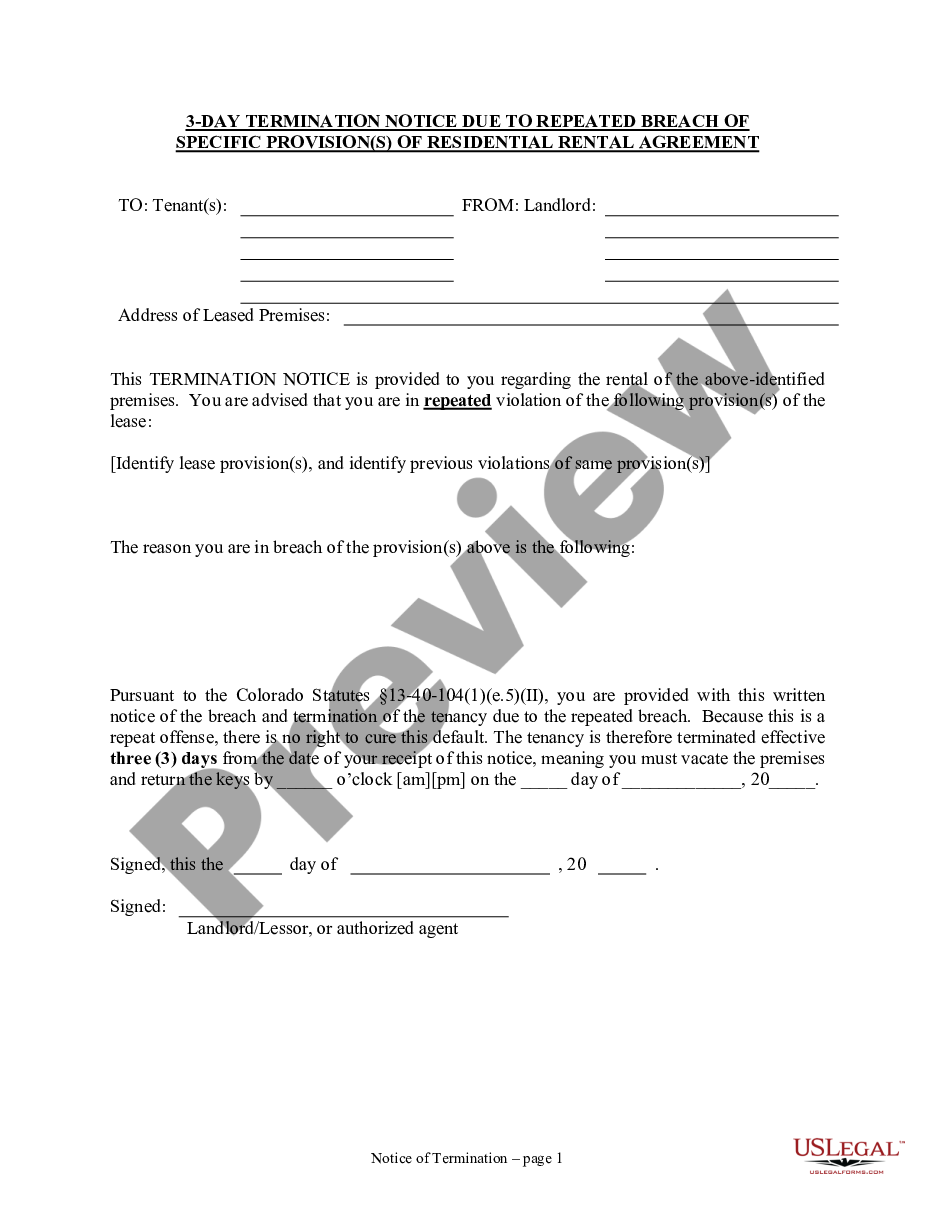 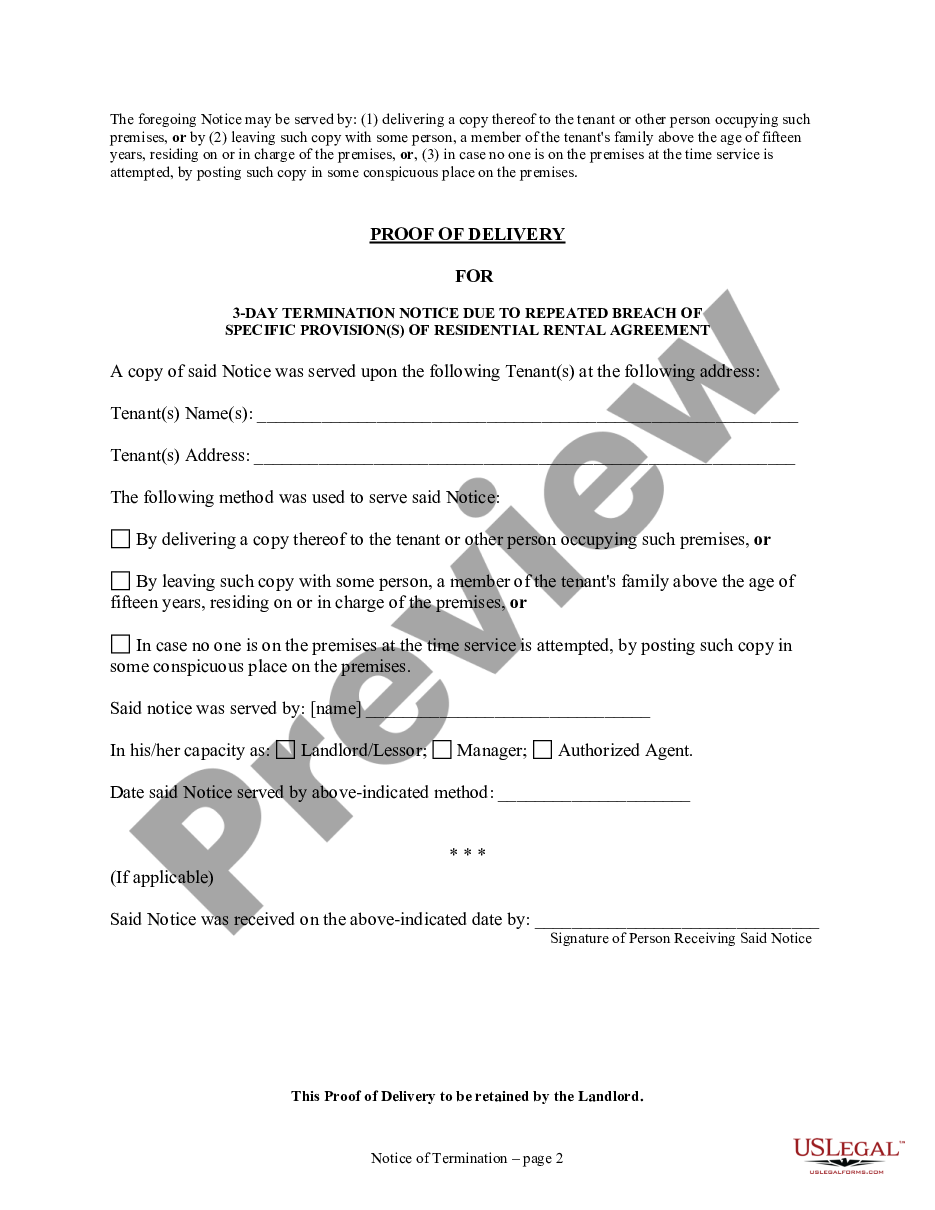 This form is to for a Landlord to provide notice of termination of a written lease due to tenant's repeated violation of a specific provision or provisions of a residential rental agreement. There is no right to cure in the case of a repeat violation and Tenant must move out within the 3 day notice period. Landlord inserts the specific breach into the form. The law does not define how much time must pass before a breach is no longer a "repeated" breach, but 6 months is a good rule of thumb.

A "periodic tenancy" is a rental agreement with no set ending date, for example a month-to-month tenancy, which can continue until either landlord or tenant decides to end it by choice, or if cause arises for the tenancy to be terminated due to a violation ("breach") of the agreement.

A "term tenancy" is a rental agreement for a predetermined term with a set beginning and ending date, for example, January 1, 2000, to December 31, 2000. Unless there is a violation ("breach") of the rental agreement, the tenancy may not be ended prior to the end of its defined term unless landlord and tenant agree to cut it short.

"Serving" a termination notice means delivering the notice to the tenant. Service of the notice must be done according to law and in the proper form. These requirements are described in IV., below.

(2) Such notice shall describe the property and the particular time when the tenancy will terminate and shall be signed by the landlord or tenant, the party giving such notice or his agent or attorney.

(4) No notice to quit shall be necessary from or to a tenant whose term is, by agreement, to end at a time certain.

III. Terminating a periodic tenancy or a term tenancy for cause Summary:

(1) Any person is guilty of an unlawful detention of real property in the following cases:

(c) When any tenant at will, or by sufferance, or for any part of a year, or for one or more years, holds over after the expiration of the term for which the premises were leased, or after such tenancy has been terminated by either party;

(d) When such tenant holds over without permission of his landlord after any default in the payment of rent pursuant to the rental agreement, and three days' notice in writing has been duly served upon the tenant, requiring in the alternative the payment of the rent or the possession of the premises. (No agreement shall contain a waiver by the tenant of this three days' notice requirement).

(d.5) When such tenant or lessee holds over, without the permission of the landlord, contrary to any condition or covenant the violation of which is defined as a substantial violation in section 13-40-107.5, [violent criminal acts, drug-related felonies] and notice [three day written notice to quit: shall describe the property, the particular time when the tenancy will terminate, and the grounds for termination, and shall be signed by the landlord or agent] in writing has been duly served upon such tenant or lessee in accordance with section [13-40-107.5 L. 2003];

(I) When a tenant has previously been served with the notice described in paragraph (e) requiring compliance with a condition of the agreement, and thereafter holds over, without permission, contrary to the same condition.

(II) A tenancy may be terminated at any time pursuant to paragraph (e.5) on the basis of a subsequent violation. The termination shall be effective three days after service of written notice to quit. [There is no indication of how much time must pass before a second violation is no longer considered a "subsequent violation." 6 months is sometimes a standard in other states. - USLF Ed.]

The demand required by section 13-40-104 shall be made in writing, specifying the grounds of the landlord's right to the possession of such premises, describing the premises, and the time when the same shall be delivered up, and shall be signed by the landlord, his agent, or his attorney. [USLF forms are designed to meet these requirements.]