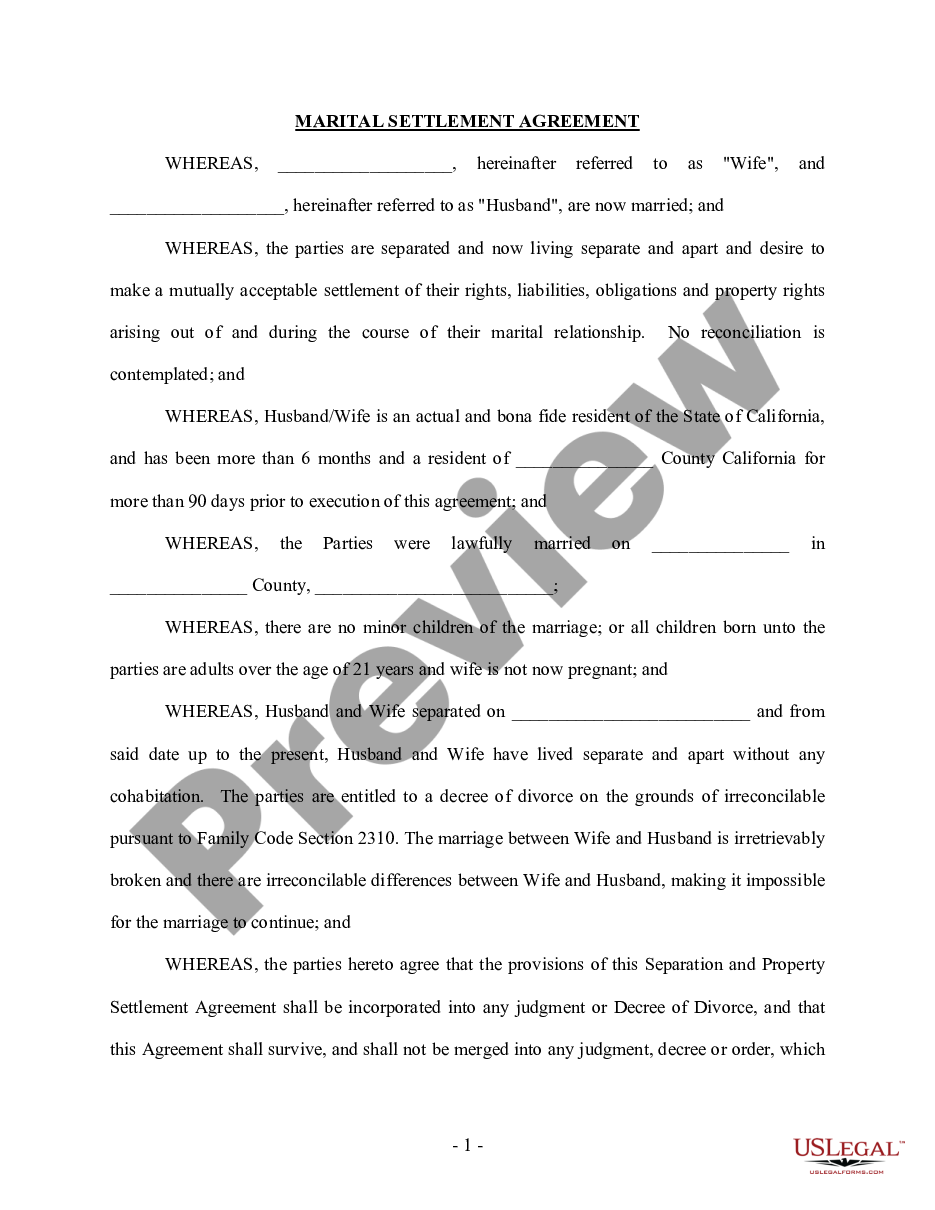 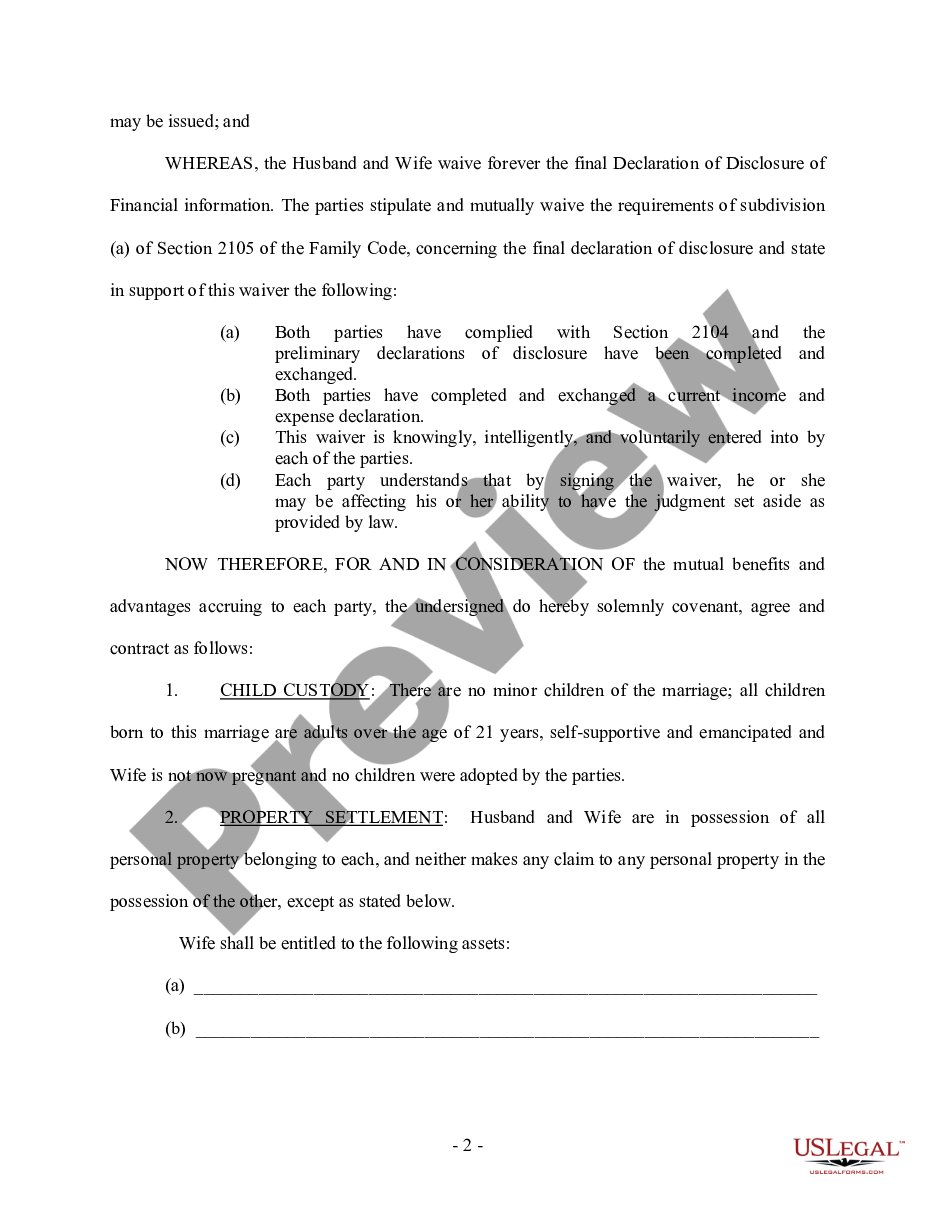 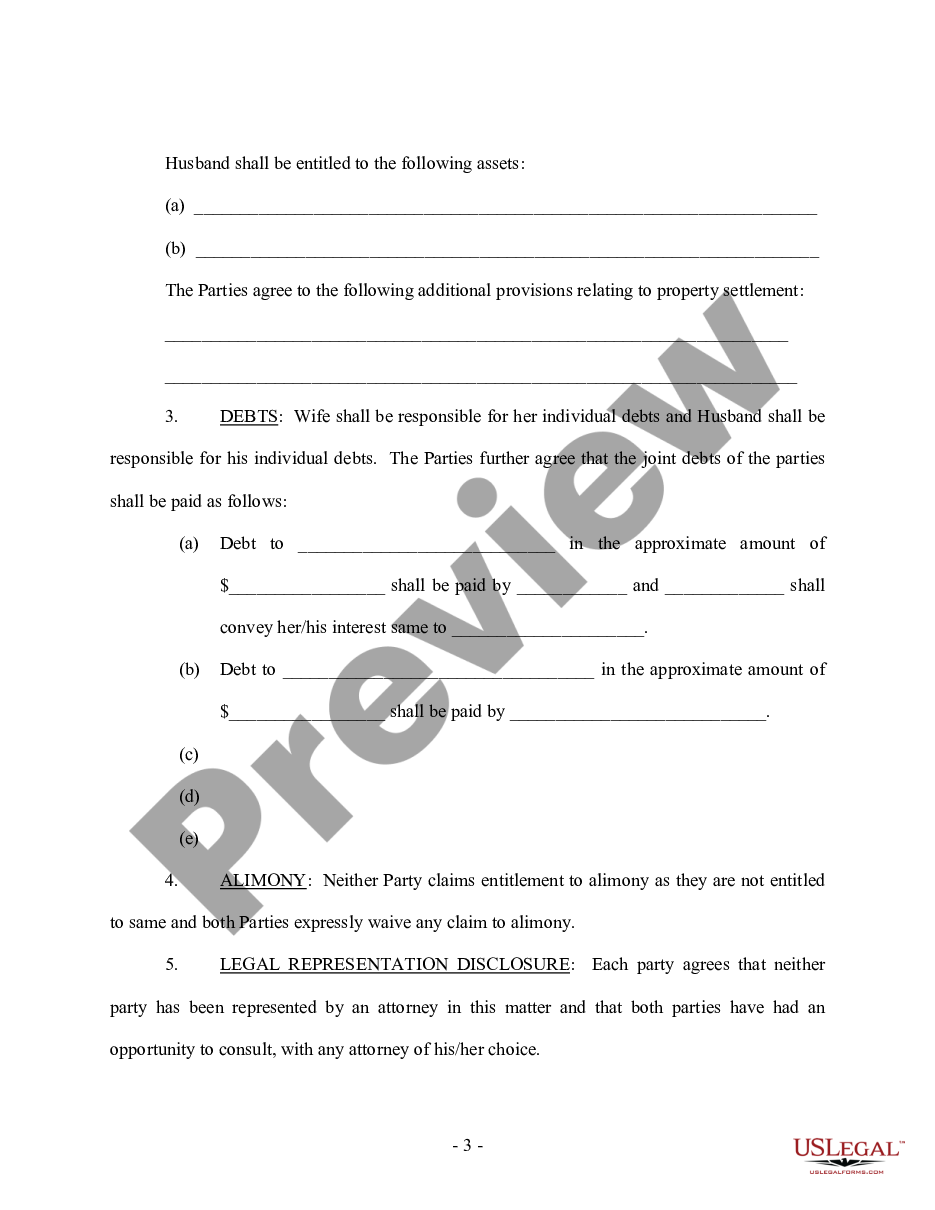 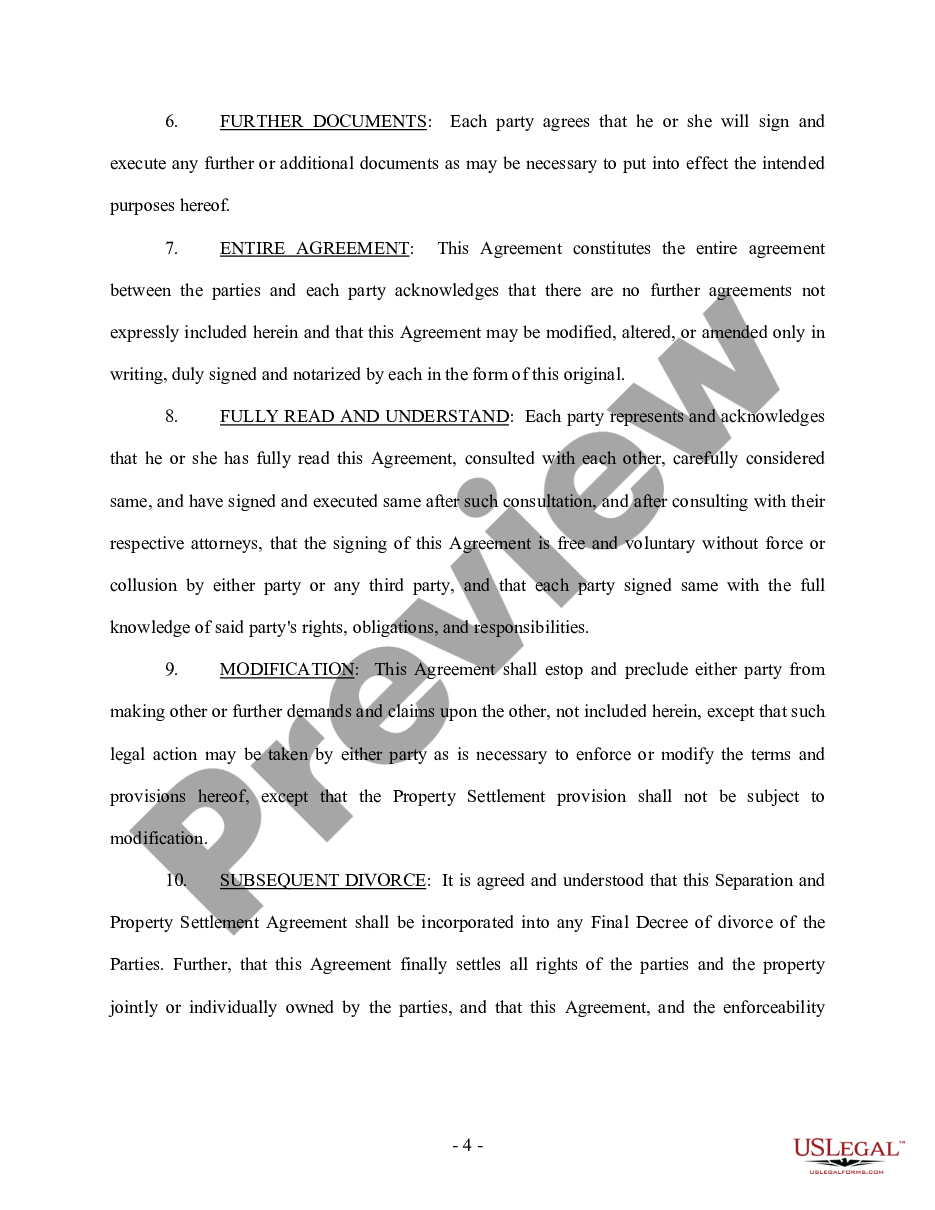 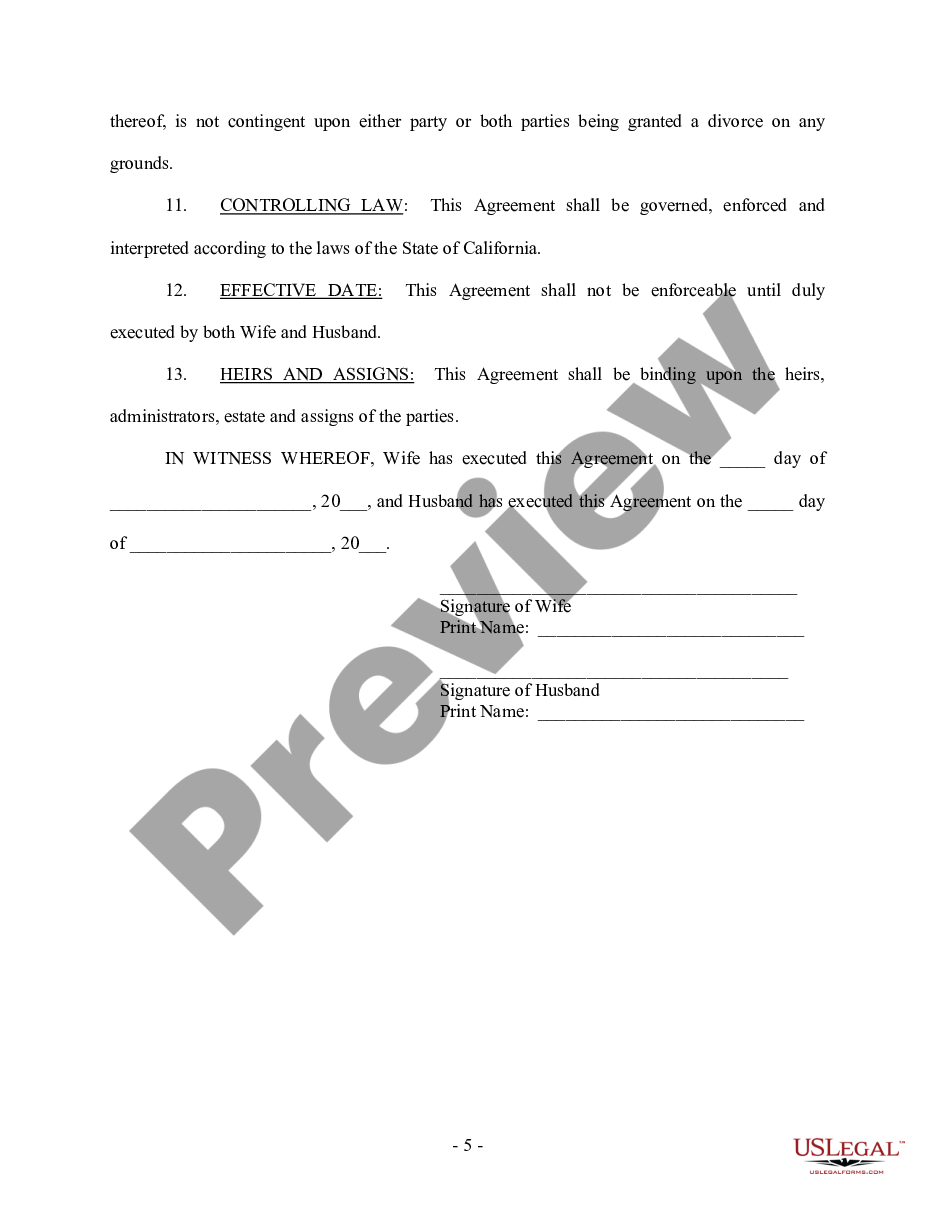 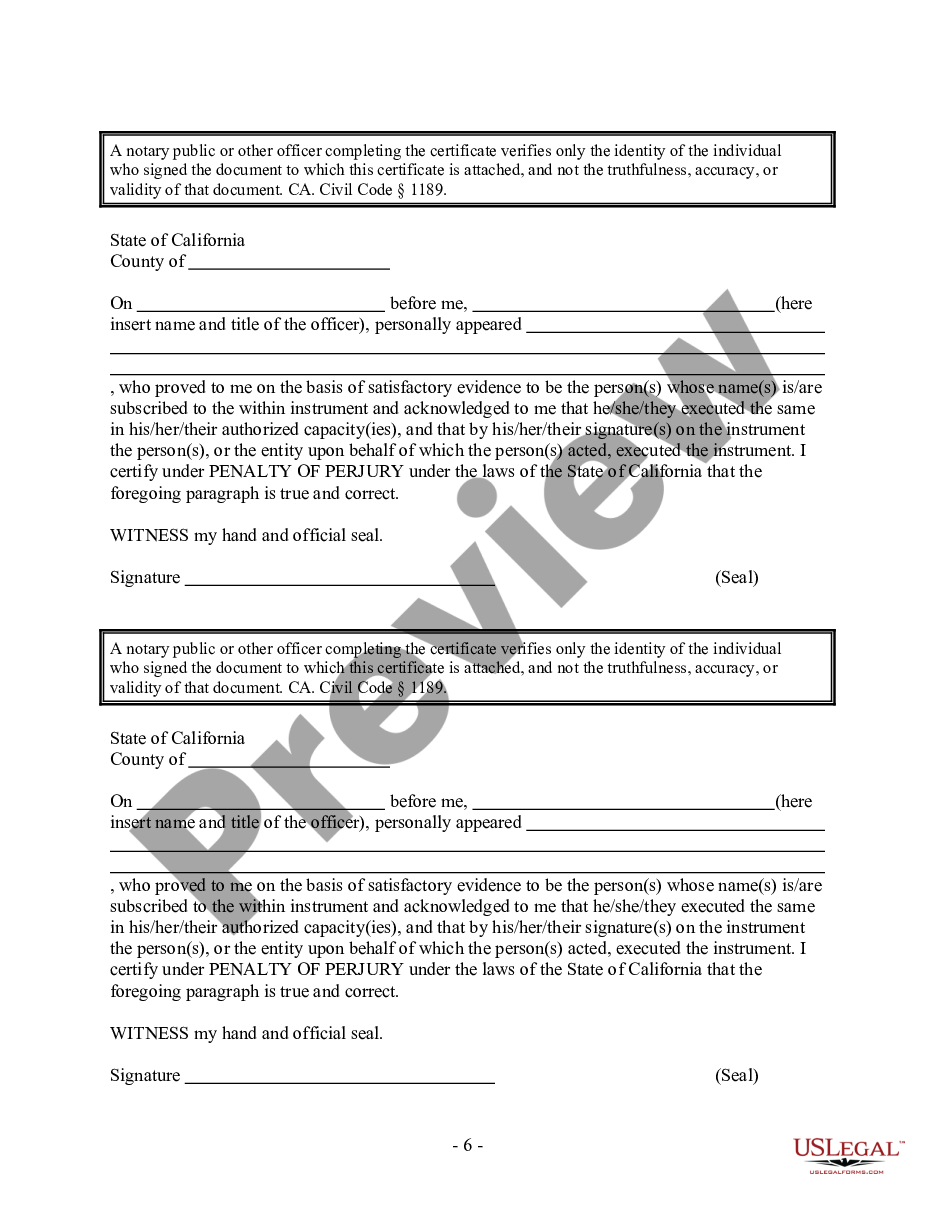 How To Fill Out Legal Property Settlement?

If you're looking for precise California Legal Separation and Property Settlement Agreement with Adult Children - Marital - Domestic - Parties May have Joint Property or Debts - Effective Immediately copies, US Legal Forms is what you need; get files developed and examined by state-accredited legal professionals. Utilizing US Legal Forms not merely keeps you from bothers regarding legitimate paperwork; additionally, you save up time and effort, and funds! Downloading, printing out, and submitting a professional web template is really cheaper than asking a solicitor to get it done for you.

To start, finish your sign up procedure by providing your electronic mail and making a secret password. Stick to the guidance below to create your account and find the California Legal Separation and Property Settlement Agreement with Adult Children - Marital - Domestic - Parties May have Joint Property or Debts - Effective Immediately web template to deal with your needs:

And while, that’s it. In a few simple actions you get an editable California Legal Separation and Property Settlement Agreement with Adult Children - Marital - Domestic - Parties May have Joint Property or Debts - Effective Immediately. After you make an account, all next orders will be worked up even simpler. When you have a US Legal Forms subscription, just log in account and then click the Download option you can find on the for’s page. Then, when you should employ this template again, you'll constantly manage to find it in the My Forms menu. Don't waste your time and effort checking countless forms on various web sources. Buy precise templates from just one safe service!

All forms provided by US Legal Forms, the nations leading legal forms publisher. When you need California Property Children, don't accept anything less than the USlegal™ brand. "The Forms Professionals Trust ™

Do you have to file for legal separation before divorce in California?

In California, there is no required separation period before you can get divorced. That means that you and your spouse are able to decide you want to get a divorce and, on the same day, file for divorce.

Does a husband have to support his wife during separation?

If you're in the process of filing for divorce, you may be entitled to, or obligated to pay, temporary alimony while legally separated. In many instances, one spouse may be entitled to temporary support during the legal separation to pay for essential monthly expenses such as housing, food and other necessities.

What happens if my husband won't sign a separation agreement?

A separation agreement may be set aside and determined to be unenforceable if a party can show that the agreement was not signed voluntarily, that its terms are unconscionable, or that it was obtained as the result of fraud, duress, or undue influence.

There is no minimum length of marriage that will guarantee a 50/50 division of anything.

What happens to joint property in divorce?

Upon divorce, you are on your own. In a scenario where the property is registered in the joint names of a married couple and both are also co-borrowers, the court will decide the contribution made by each party and divide the asset accordingly. Both parties would be responsible to pay the loan, though.