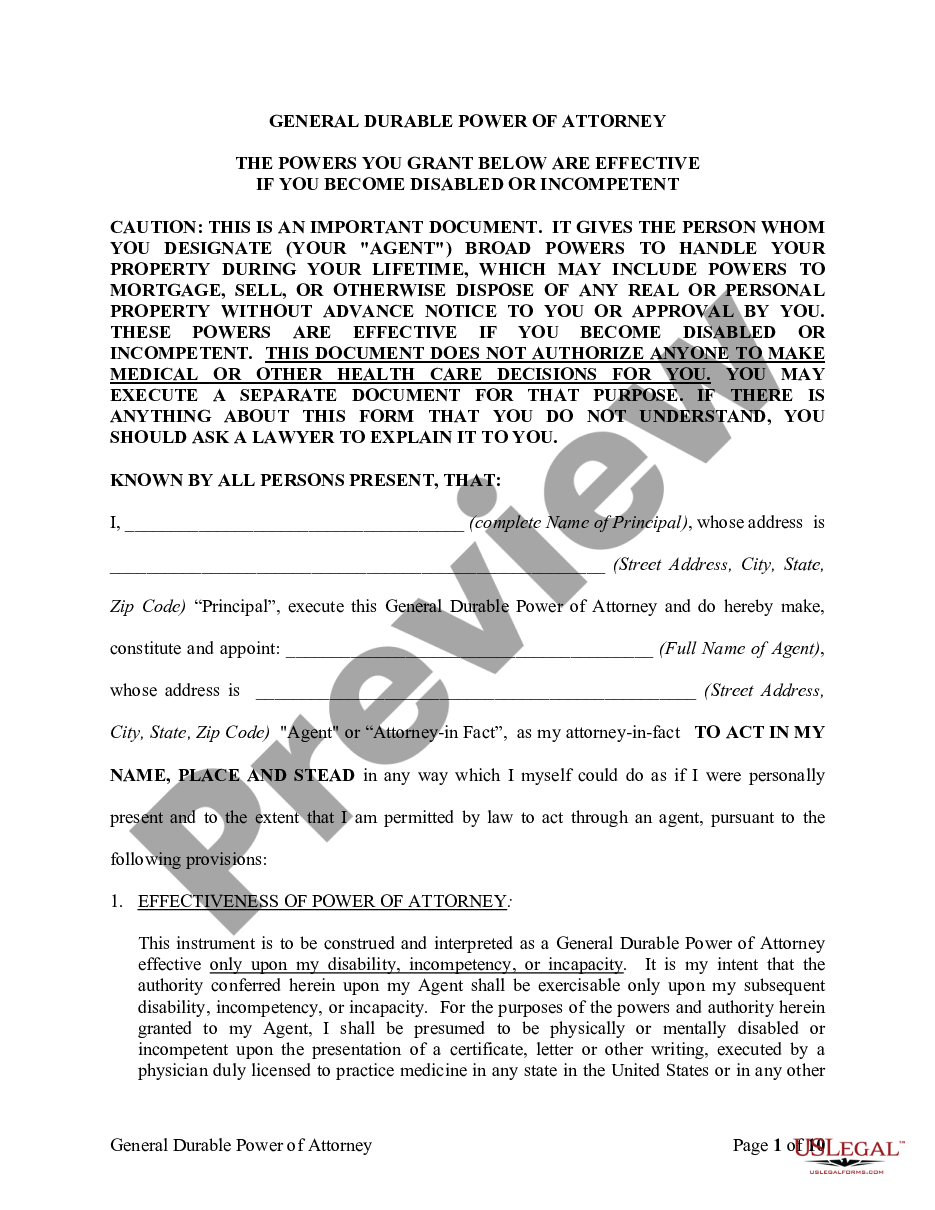 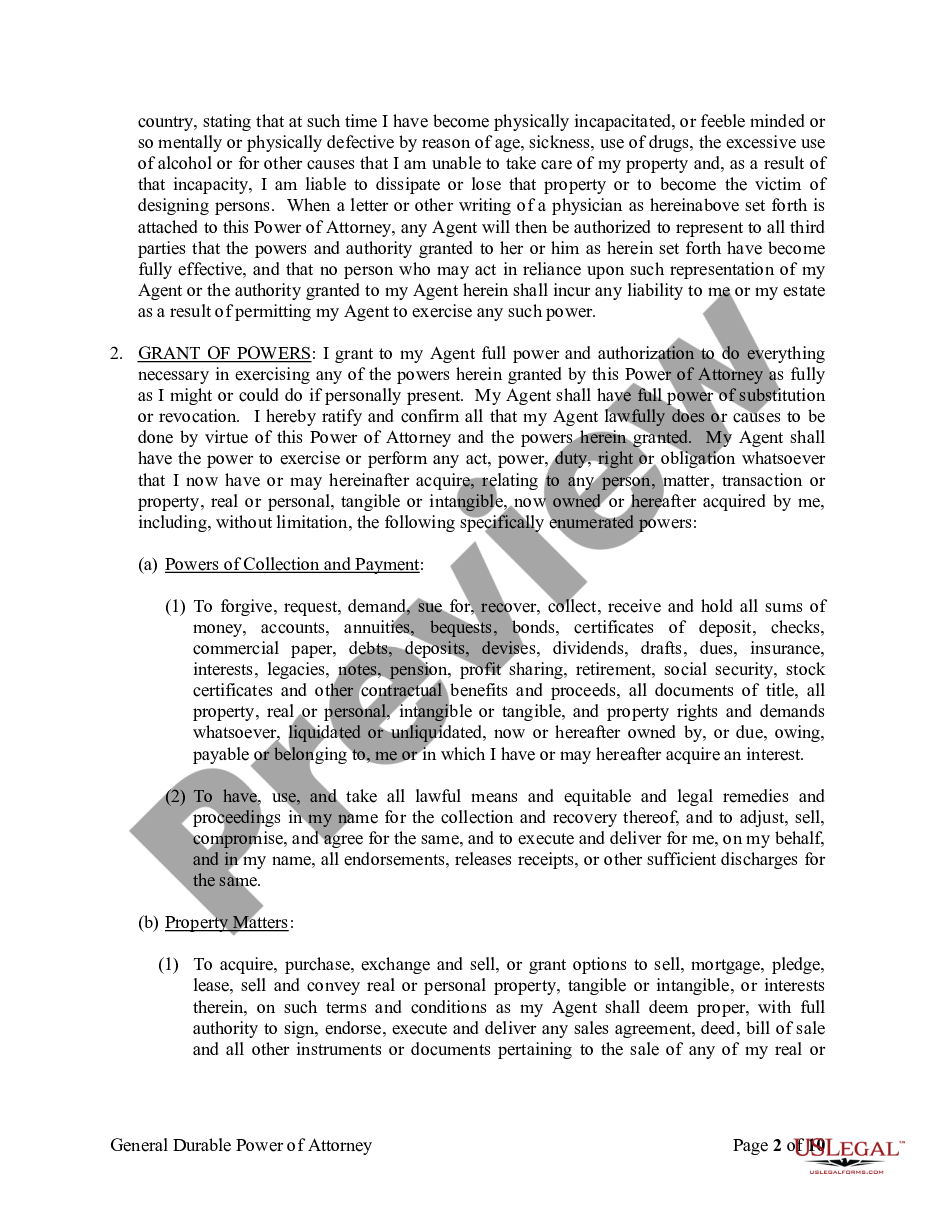 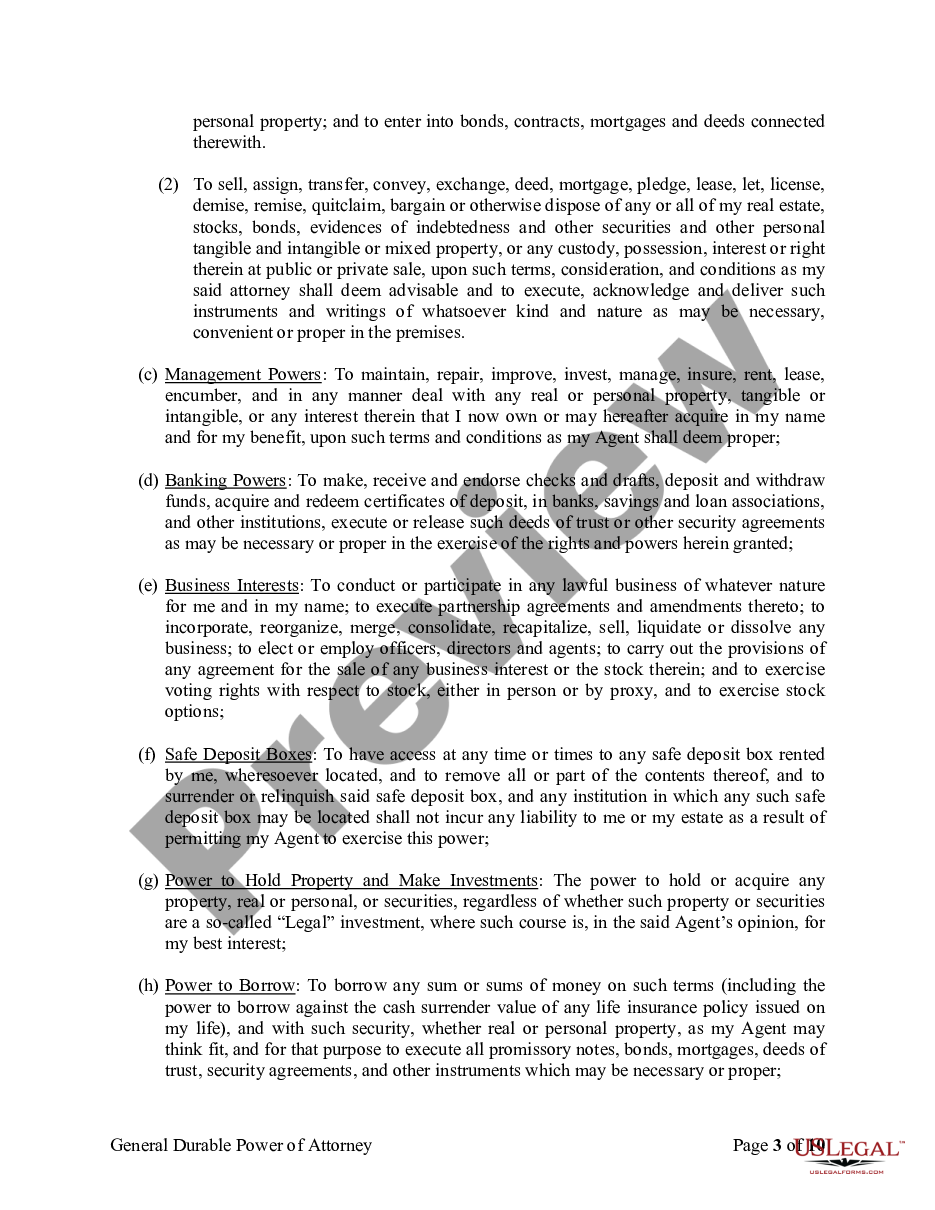 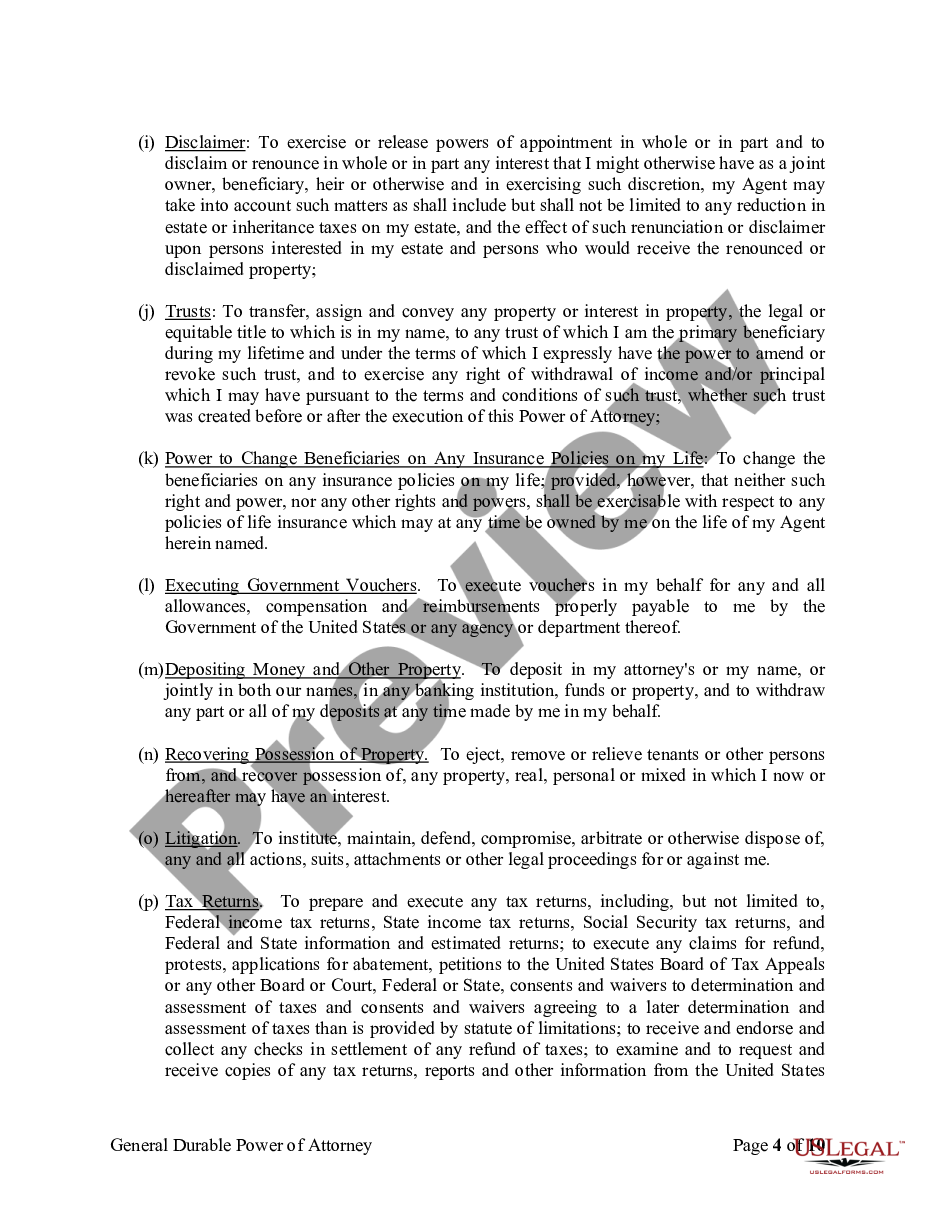 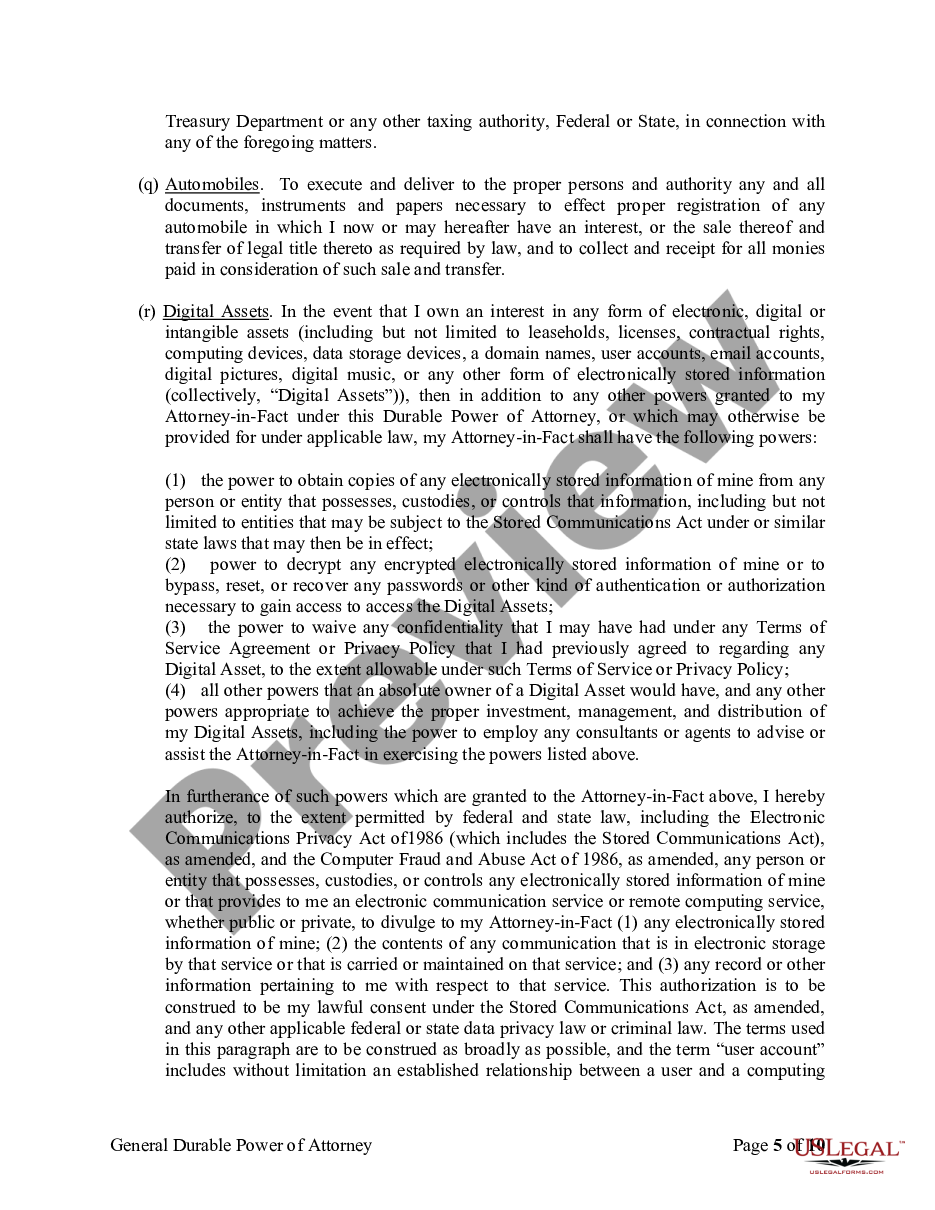 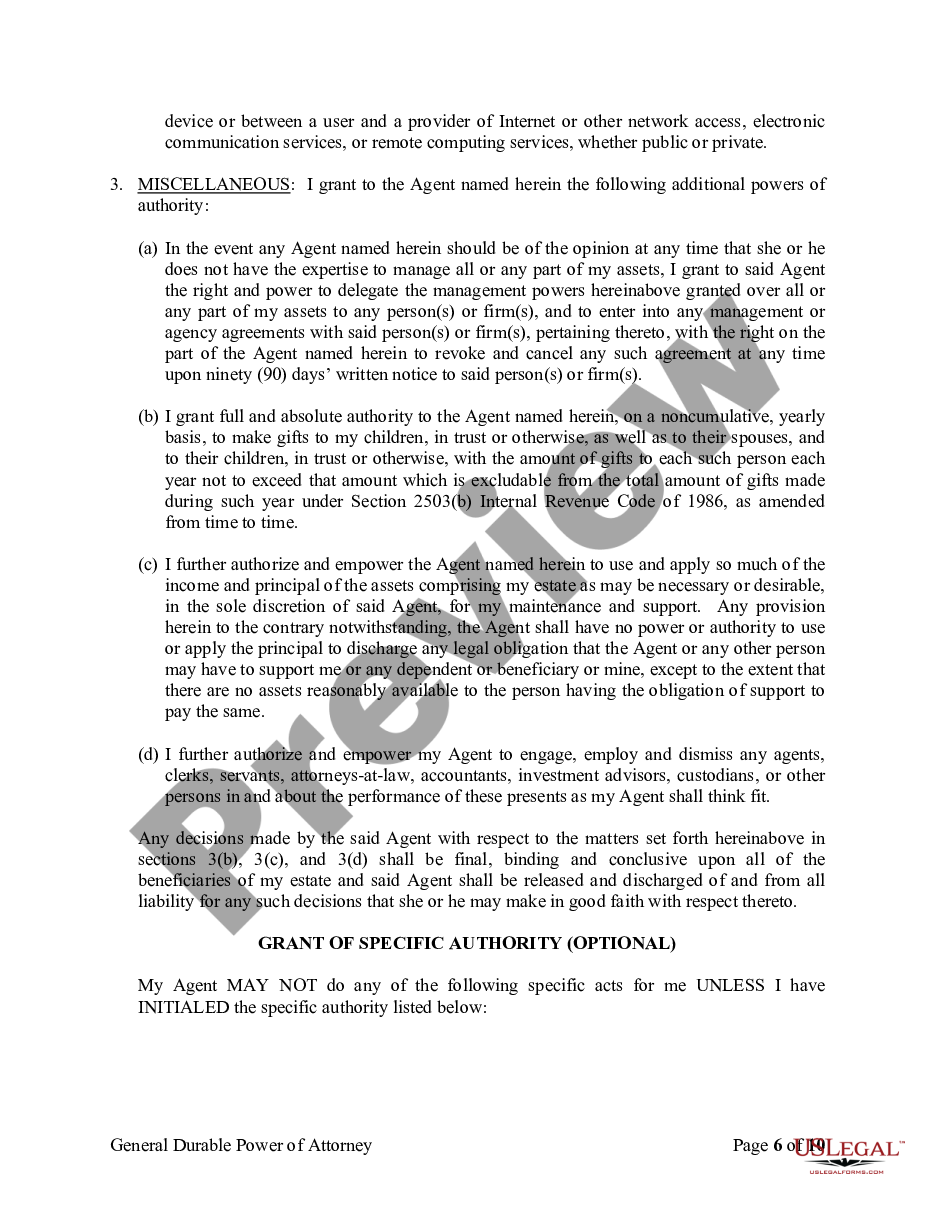 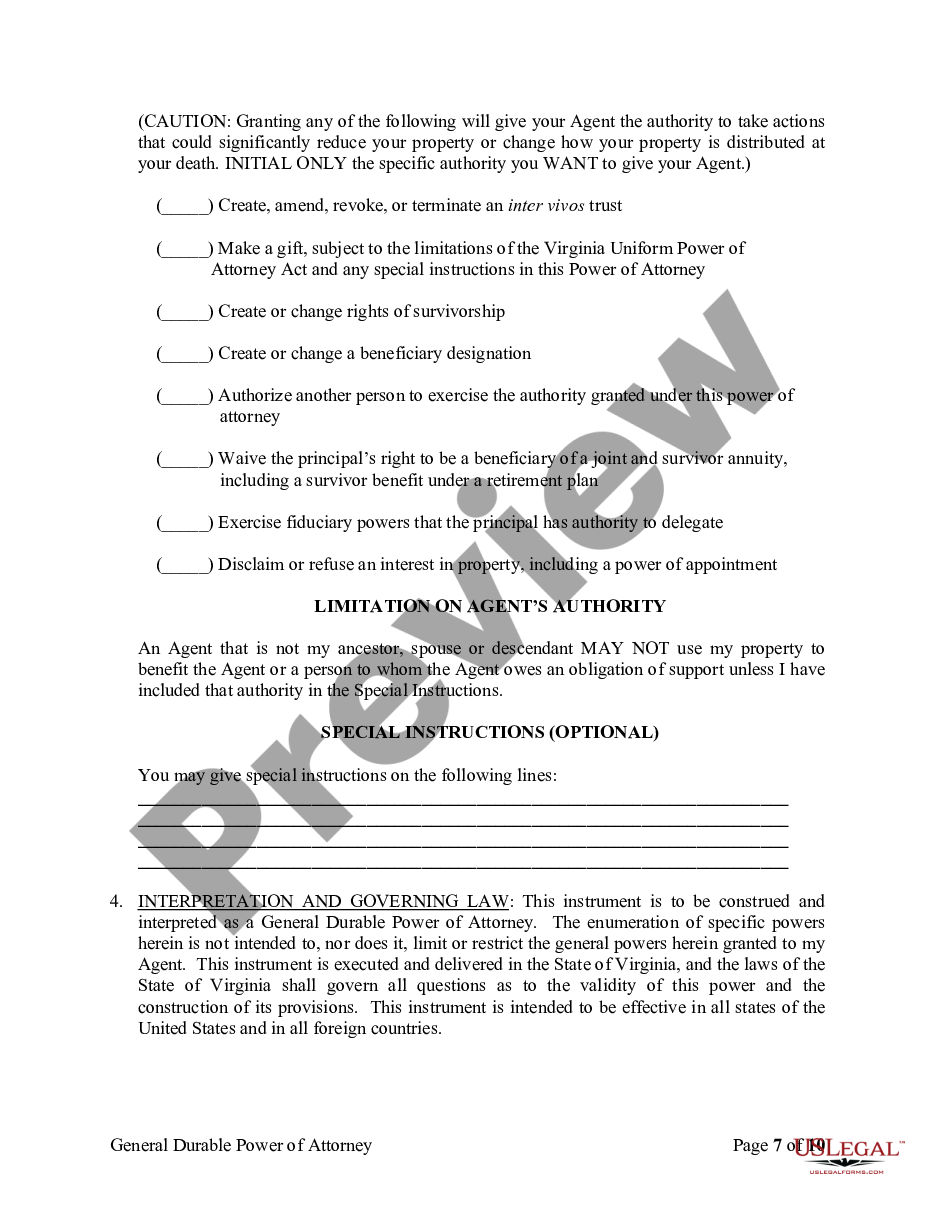 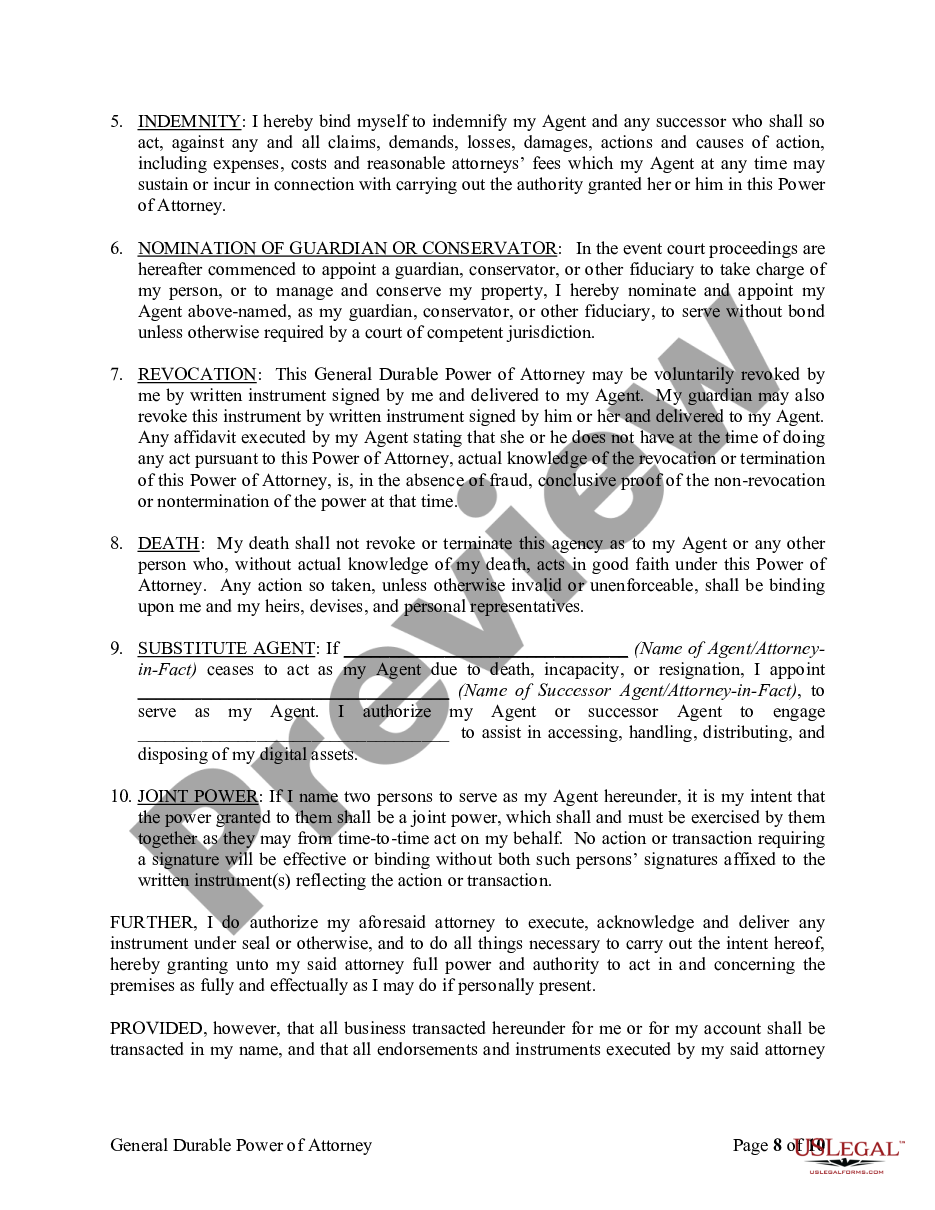 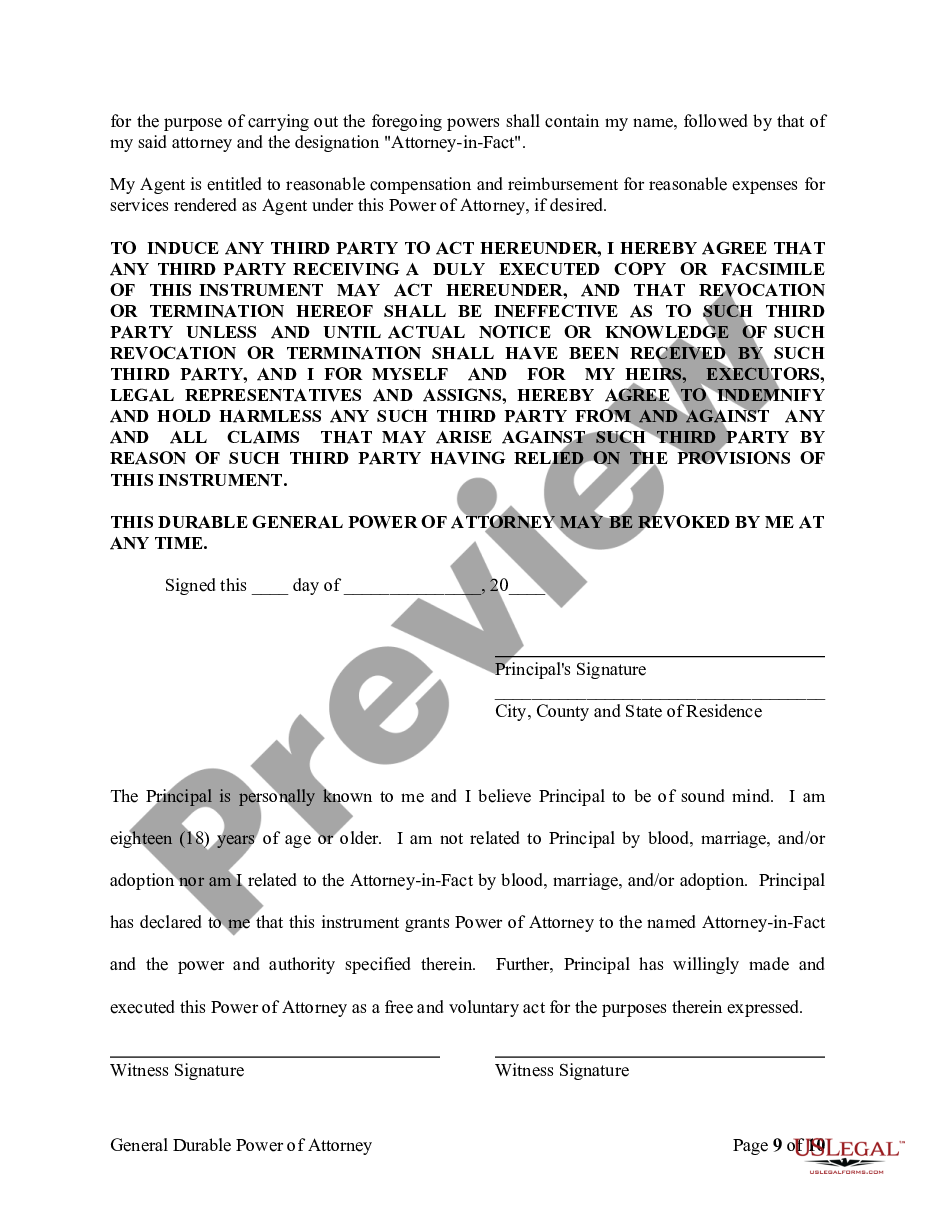 This General Durable Power of Attorney for Property and Finances Effective upon Disability form is a general, durable power of attorney which is effective ONLY upon the principal's disability, incompetency or incapacity. You can use this form to appoint an attorney-in-fact (agent) to make decisions regarding property, financial, management, banking, business and other matters for you. The powers granted to an Agent in this Power of Attorney are very broad, but do NOT provide for health care services.

How To Fill Out Virginia General Durable Power Of Attorney For Property And Finances Or Financial Effective Upon Disability?

Looking for a Virginia General Durable Power of Attorney for Property and Finances or Financial Effective upon Disability online might be stressful. All too often, you see papers which you believe are fine to use, but find out later they are not. US Legal Forms offers over 85,000 state-specific legal and tax forms drafted by professional legal professionals according to state requirements. Have any document you’re searching for within a few minutes, hassle-free.

If you already have the US Legal Forms subscription, merely log in and download the sample. It will instantly be added to the My Forms section. In case you do not have an account, you must sign up and select a subscription plan first.

Follow the step-by-step recommendations listed below to download Virginia General Durable Power of Attorney for Property and Finances or Financial Effective upon Disability from our website:

Get access to 85,000 legal templates right from our US Legal Forms library. Besides professionally drafted templates, users may also be supported with step-by-step guidelines on how to find, download, and fill out templates.

Upgrade and Save: Power of Attorney Discount Package. 5 Key Forms.

(b) An affidavit, executed by the attorney in fact or agent, setting forth that he has not, or had not, at the time of doing any act pursuant to the power of attorney, received actual knowledge or actual notice of the revocation or termination of the power of attorney, by death, disability or otherwise, or notice of any facts indicating the same, shall, in the absence of actual knowledge to the contrary on the part of the person to whom such representations are made, be conclusive proof of the nonrevocation or non-termination of the power at the time of the representation in an action by or against the person to whom the representation was made. If the exercise of the power requires execution and delivery of any instrument which is recordable under the laws of this Commonwealth, such affidavit when authenticated for record in the manner prescribed by law shall likewise be recordable.

This section shall not be construed so as to alter or affect any provision for revocation or termination contained in such power of attorney. Unless a power of attorney provides for a termination date which has occurred, the lapse of time since its execution shall not affect its validity or any actions taken thereunder. Whenever any member of the armed services of the United States shall have executed a general power of attorney, the fact that such person has been reported or listed, officially or otherwise, as "missing in action," as that phrase is used in military parlance, such status designation as "missing in action" shall not operate to revoke such power of attorney, unless such revocation be contained within the instrument creating the power.

In the absence of actual knowledge to the contrary, any person to whom such writing is presented shall be entitled to rely on an affidavit, executed by the attorney in fact or agent, setting forth that such event has occurred or condition exists.

Subsection A shall not in any way impair the right or power of any principal, by express words in the power of attorney or other writing, to authorize, or limit the authority of, any attorney-in-fact or other agent to make gifts of the principal's property.