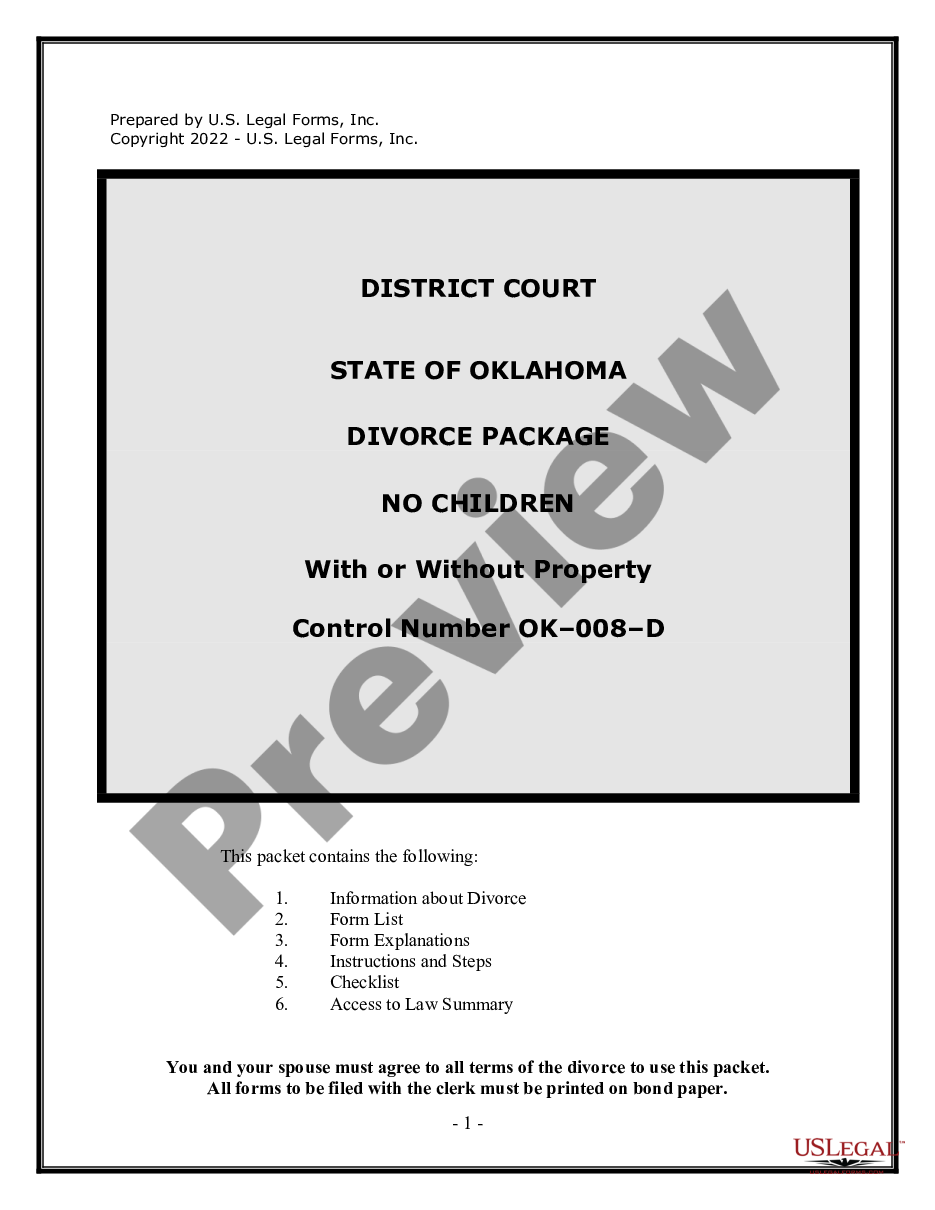 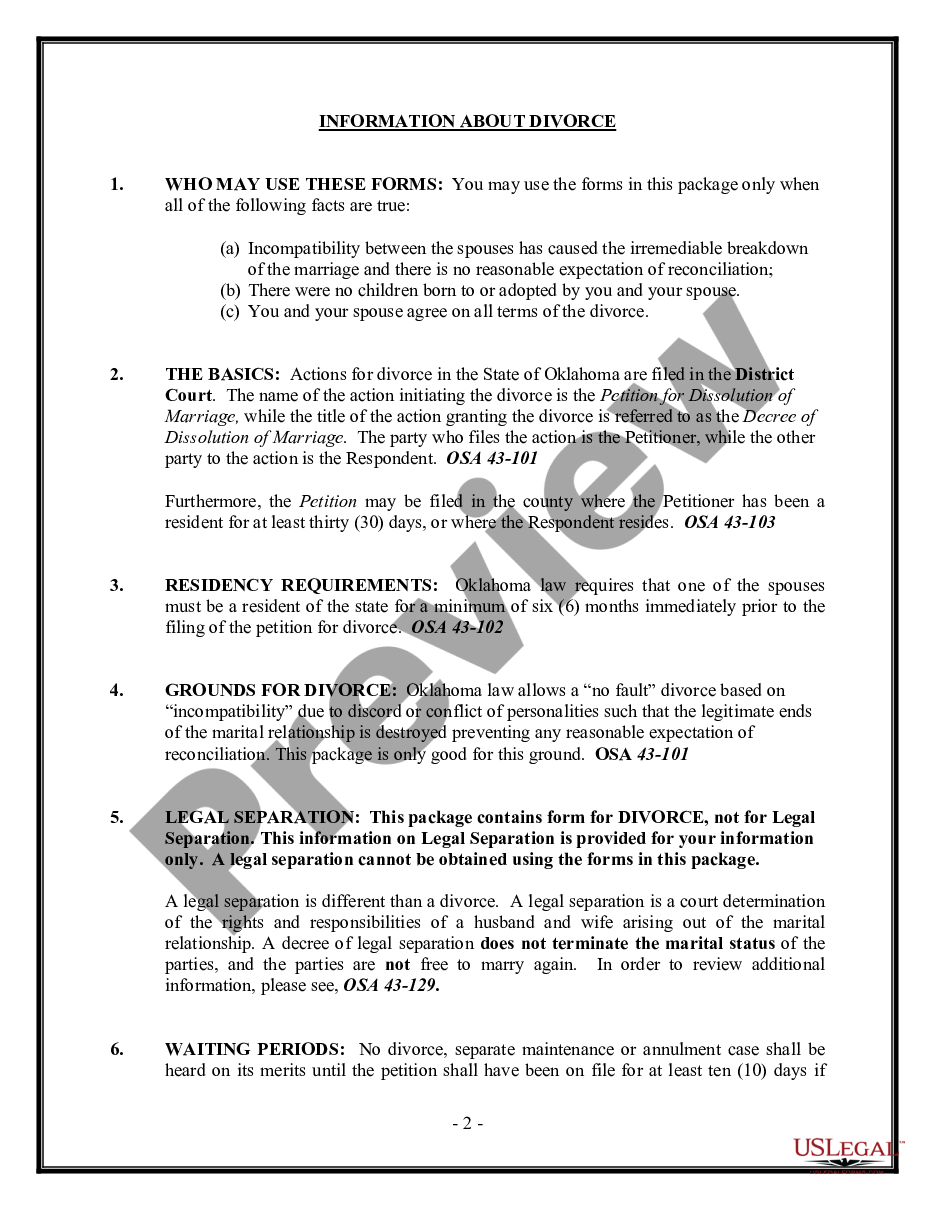 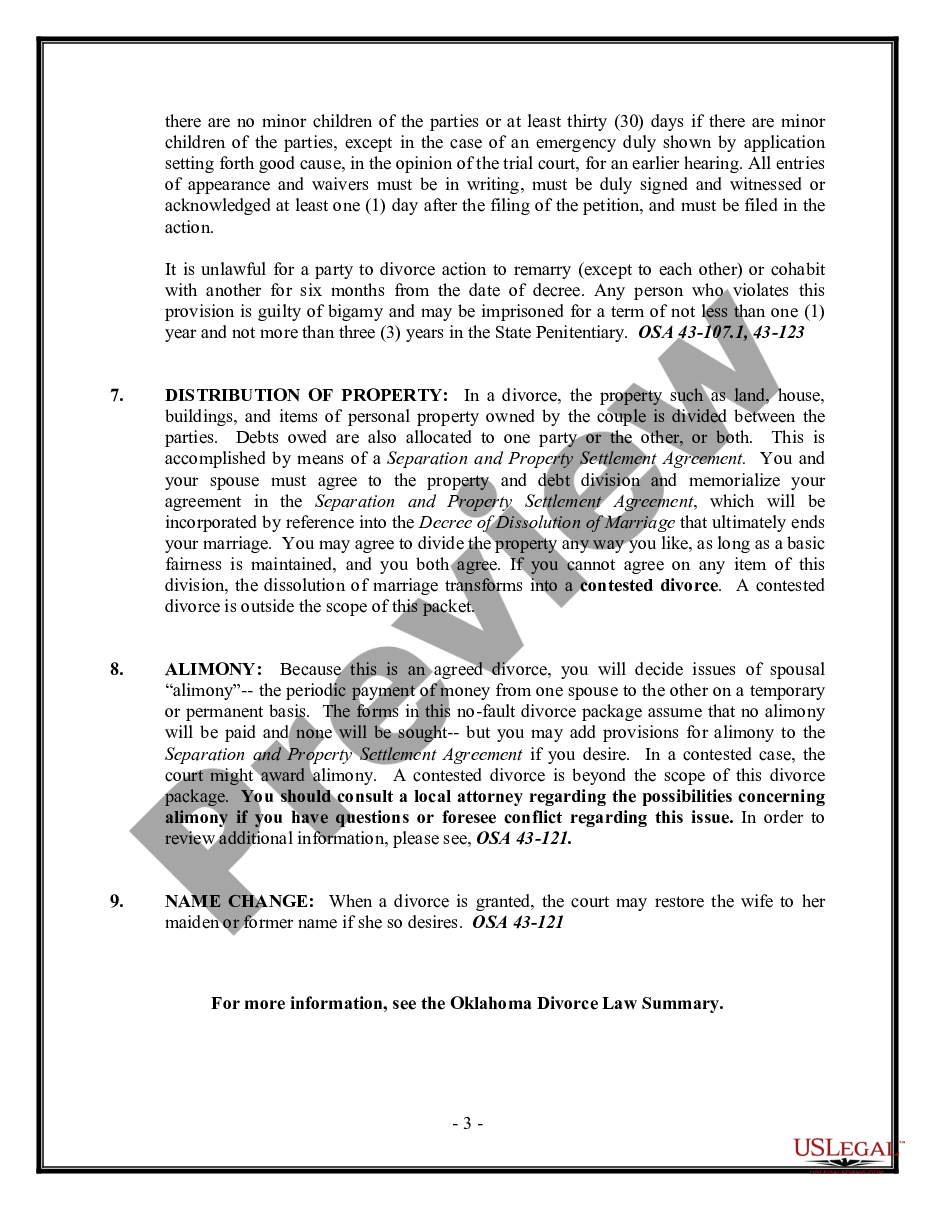 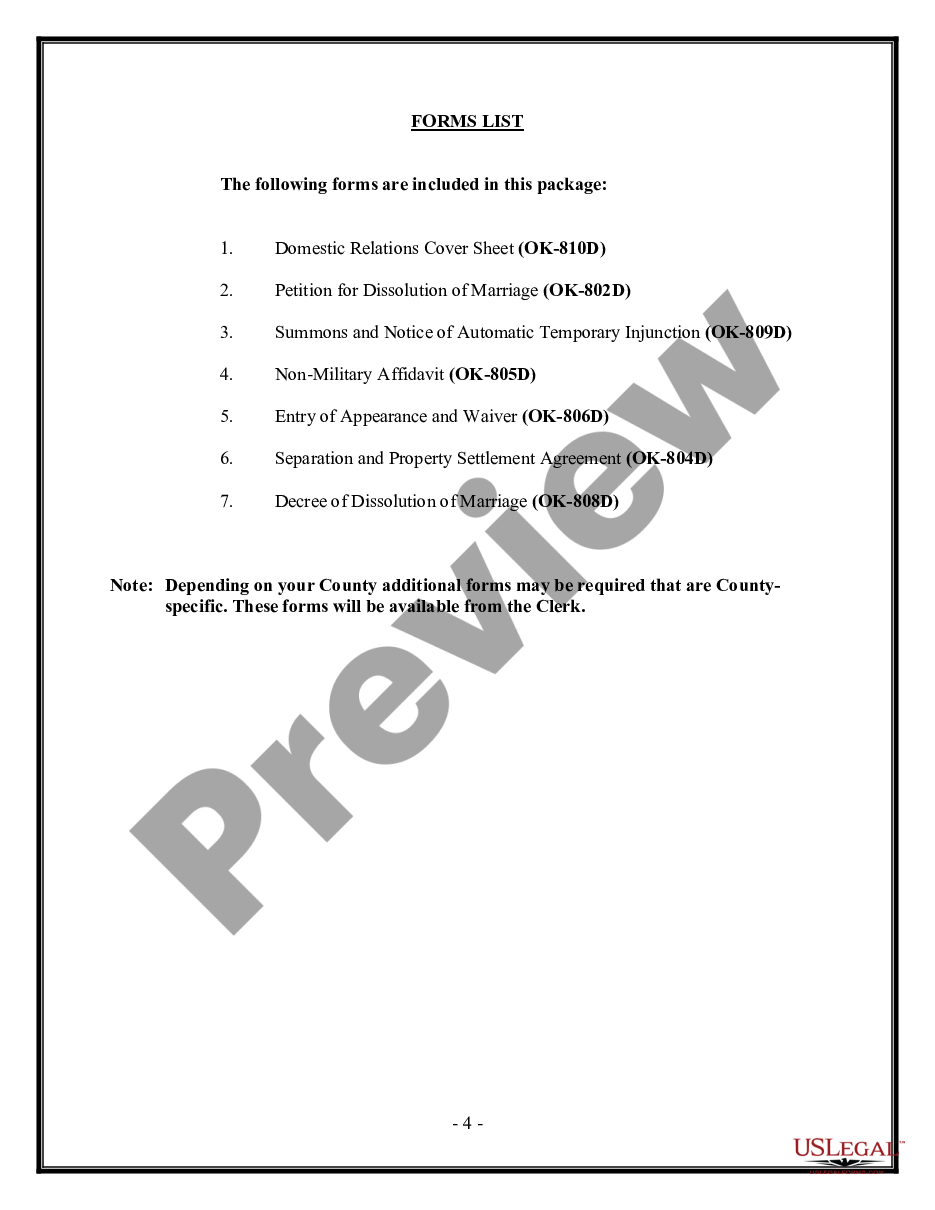 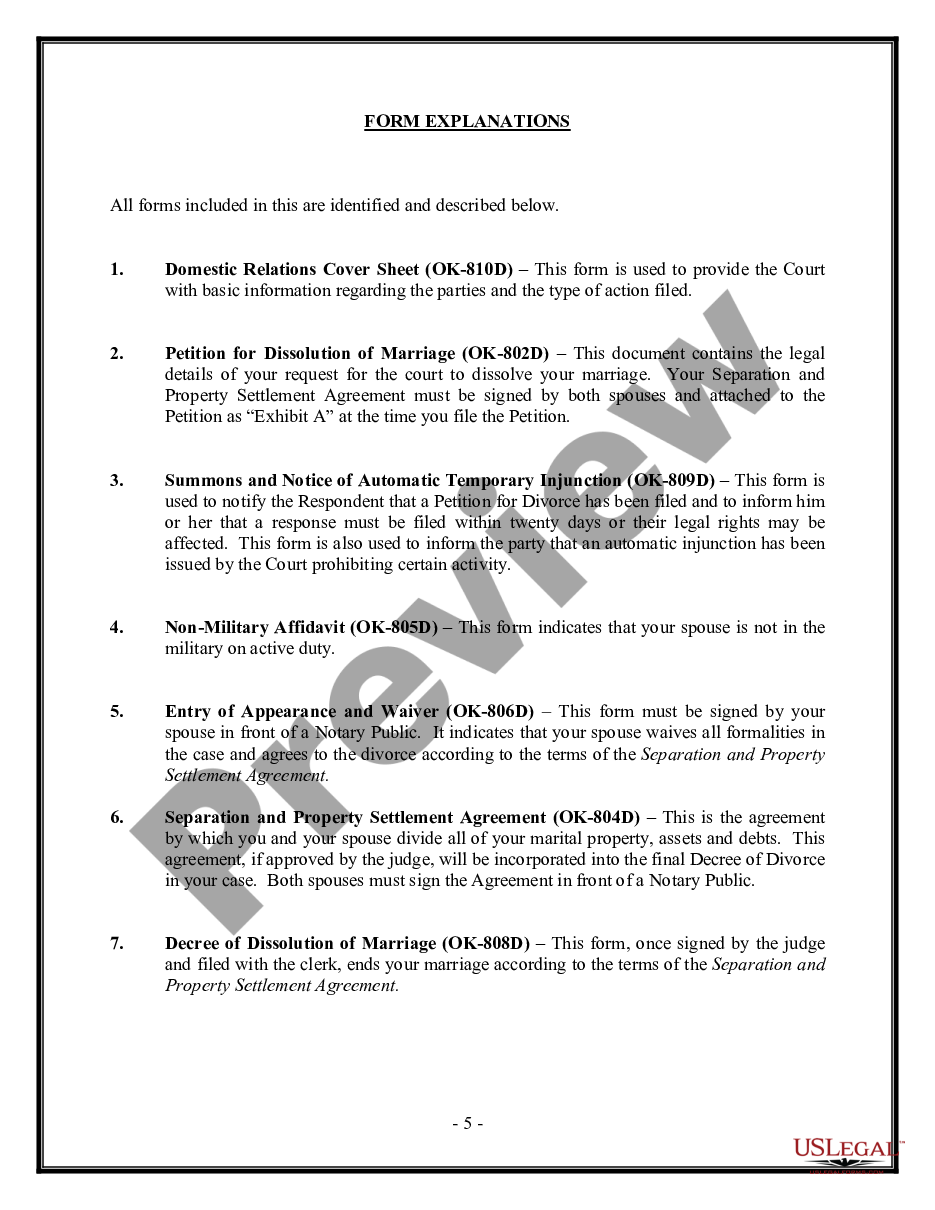 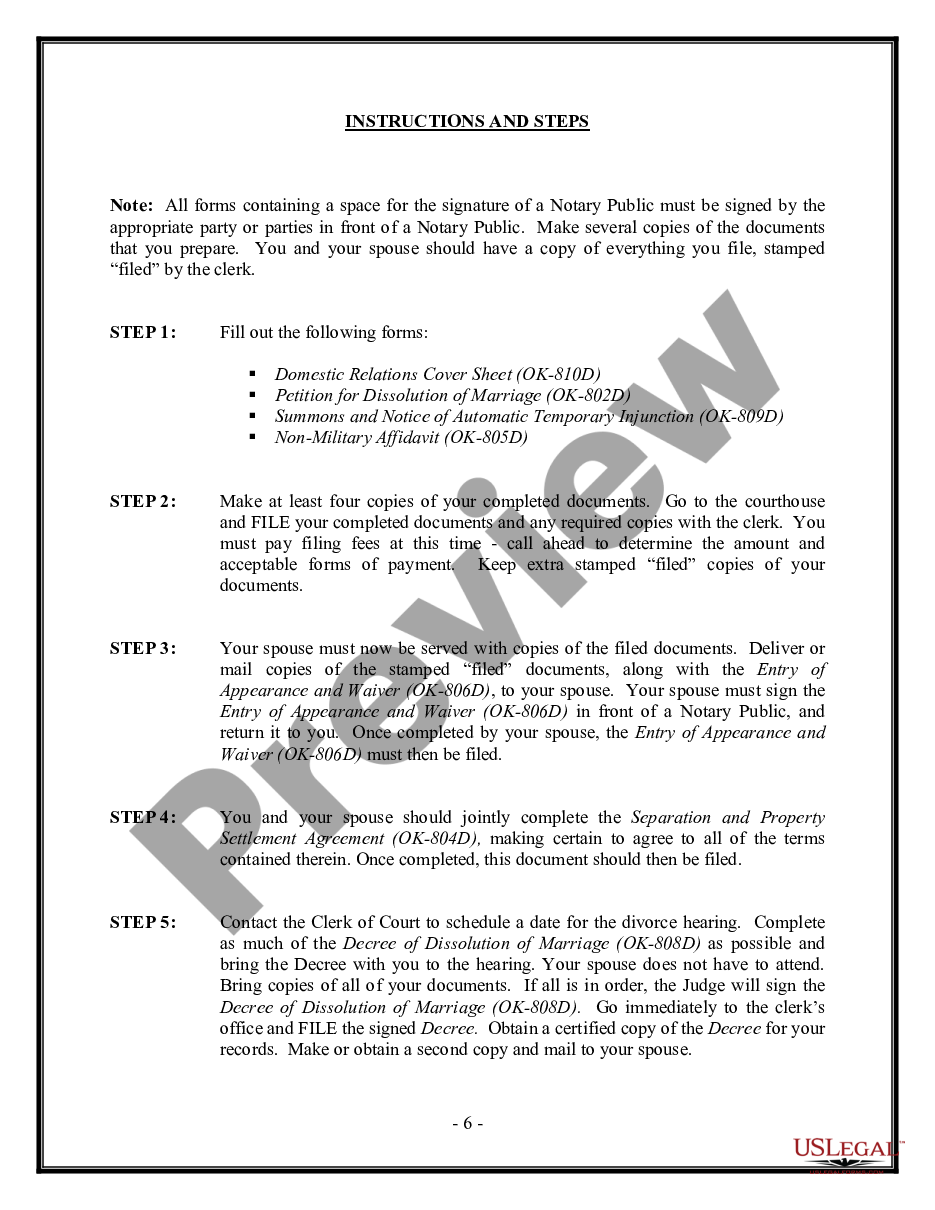 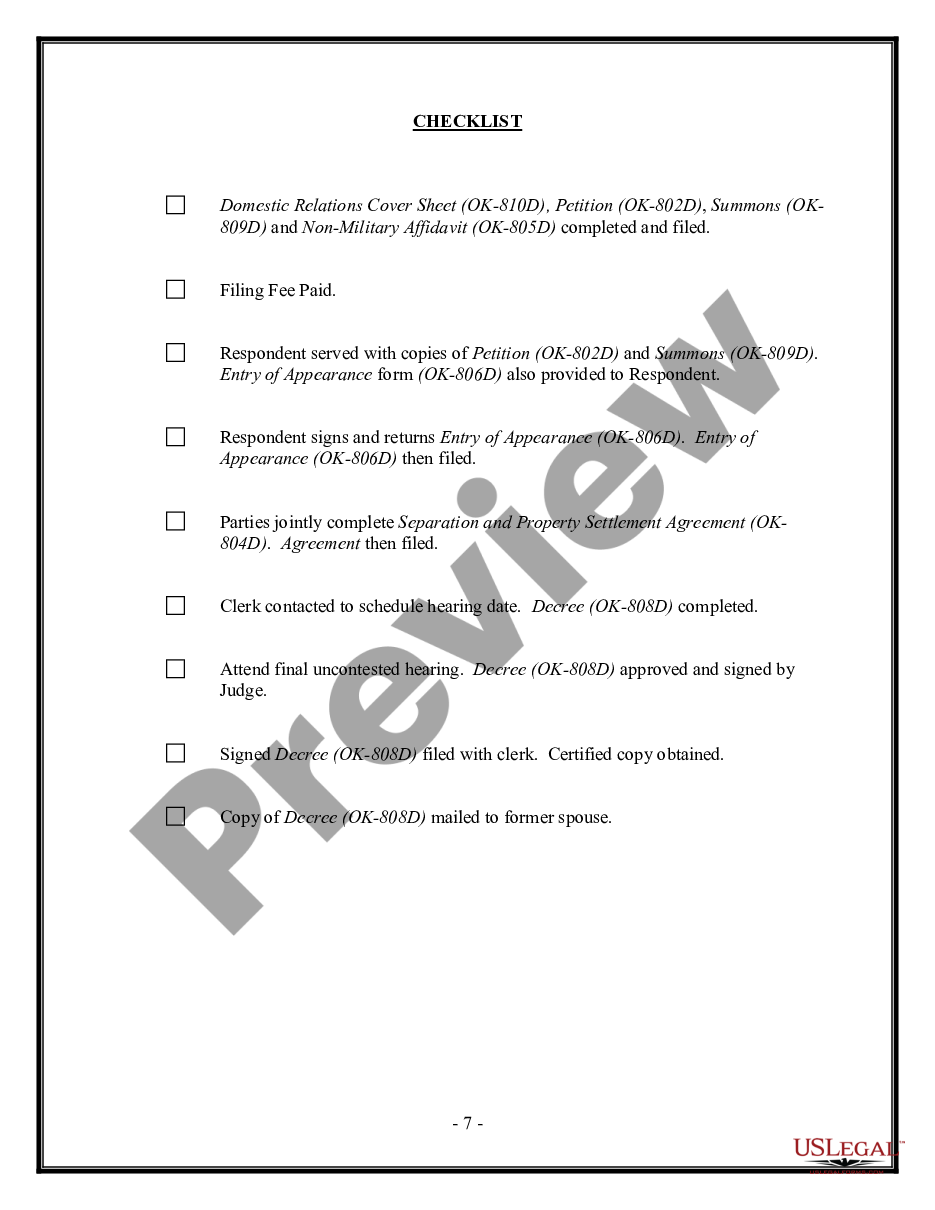 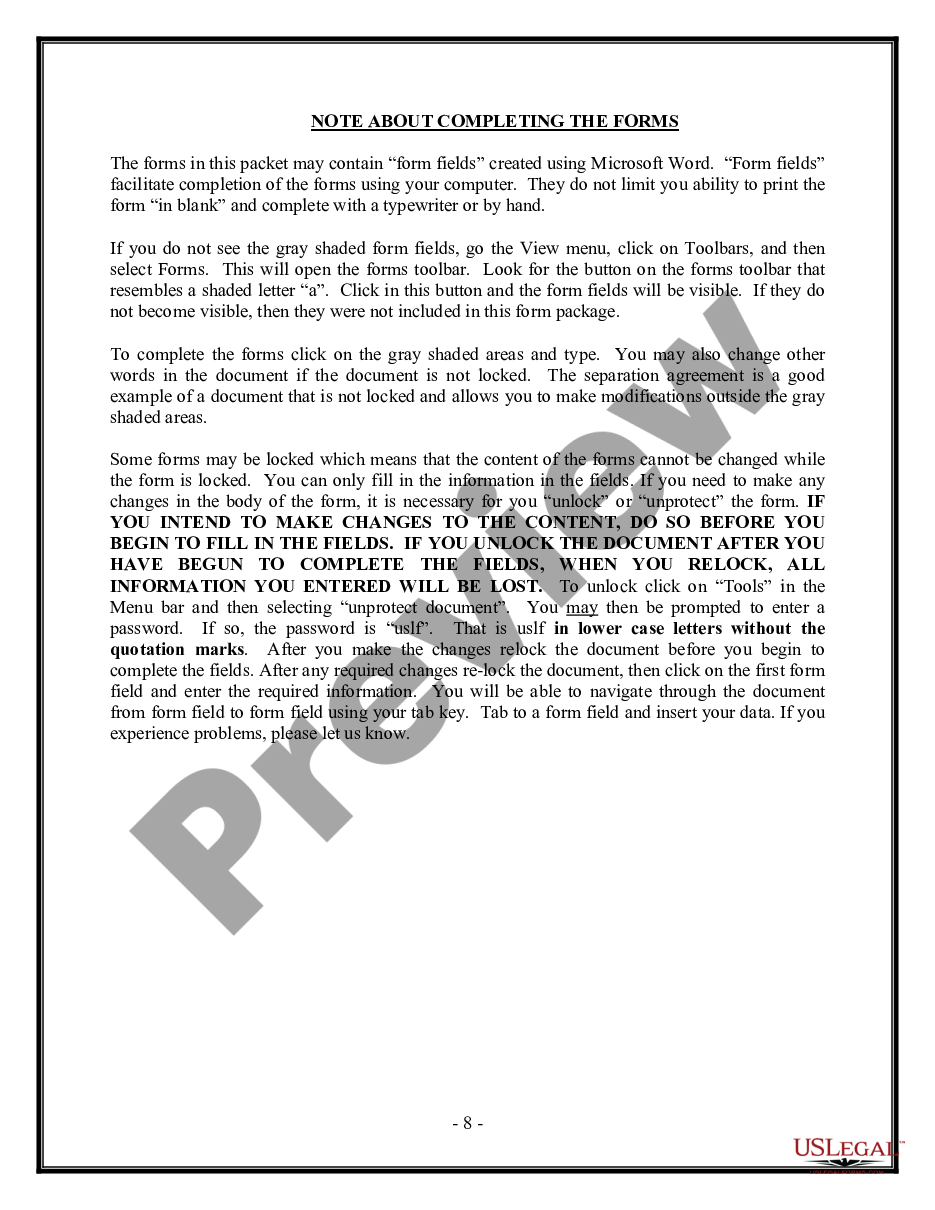 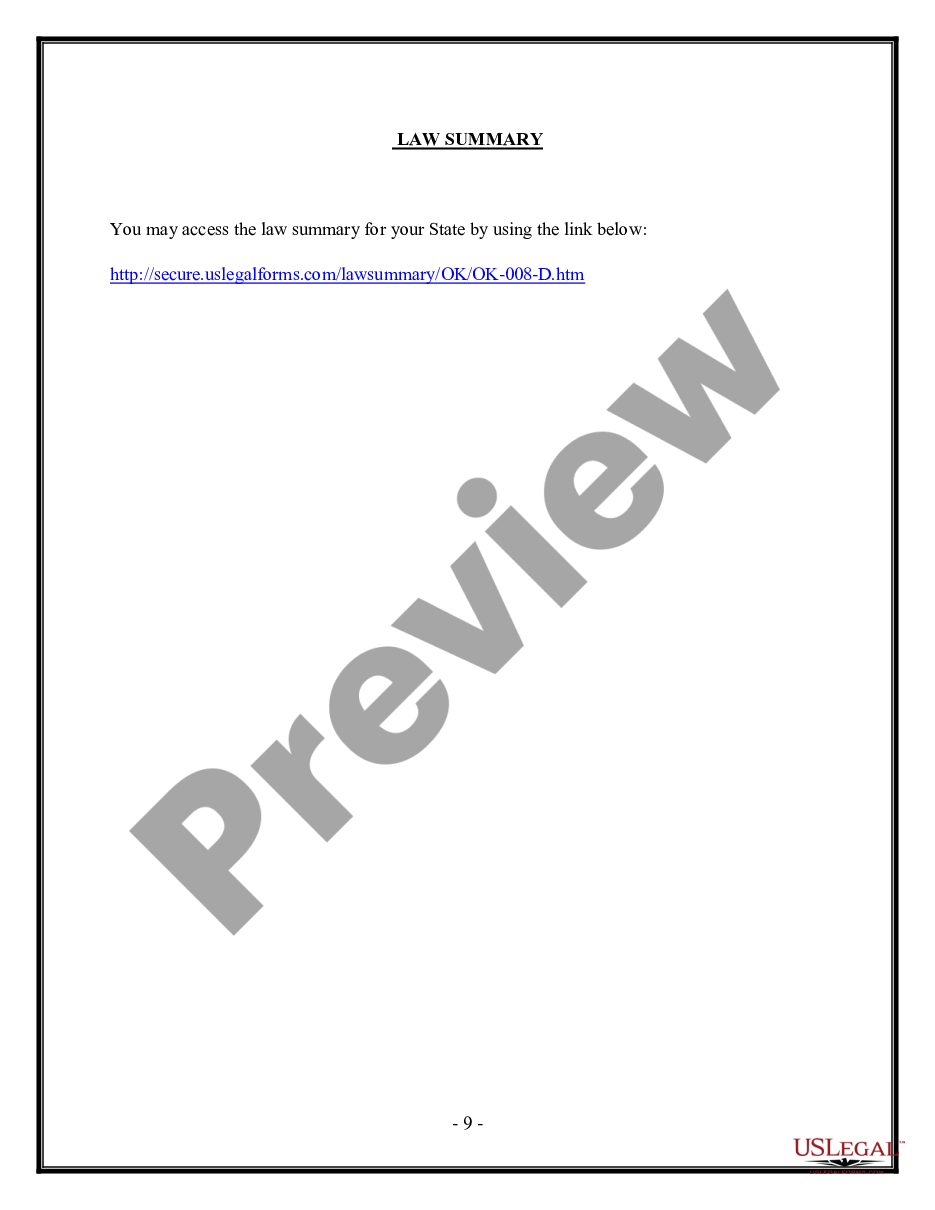 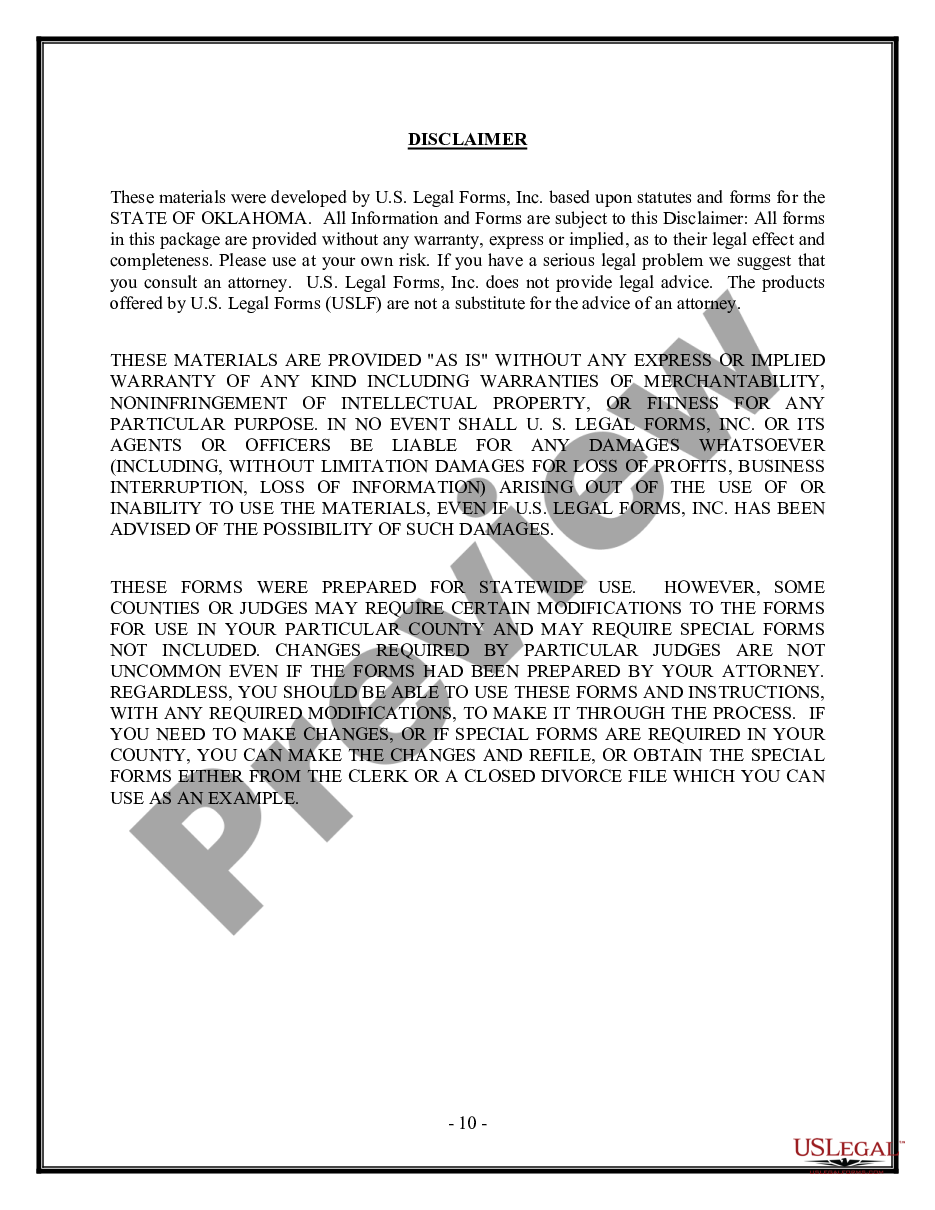 How To Fill Out Petition For Dissolution Of Marriage Oklahoma?

When it comes to submitting Oklahoma No-Fault Agreed Uncontested Divorce Package for Dissolution of Marriage for Persons with No Children with or without Property and Debts, you almost certainly imagine a long process that consists of getting a appropriate form among countless similar ones and then being forced to pay out an attorney to fill it out to suit your needs. Generally speaking, that’s a slow and expensive option. Use US Legal Forms and choose the state-specific form within clicks.

For those who have a subscription, just log in and click Download to get the Oklahoma No-Fault Agreed Uncontested Divorce Package for Dissolution of Marriage for Persons with No Children with or without Property and Debts form.

In the event you don’t have an account yet but want one, follow the point-by-point manual listed below:

Professional legal professionals work on creating our samples to ensure after saving, you don't need to worry about enhancing content material outside of your personal information or your business’s details. Be a part of US Legal Forms and get your Oklahoma No-Fault Agreed Uncontested Divorce Package for Dissolution of Marriage for Persons with No Children with or without Property and Debts sample now.

All forms provided by US Legal Forms, the nations leading legal forms publisher. When you need Uncontested Divorce In Oklahoma, don't accept anything less than the USlegal™ brand. "The Forms Professionals Trust ™

Is Oklahoma a no-fault divorce state?

A divorce in Oklahoma may be granted on the basis of adultery, abandonment, fraud, cruelty, imprisonment, conviction of a felony, living apart, and others. However, the vast majority of divorces are granted on a no-fault basis, meaning that the marriage is beyond any reasonable hope of reconciliation.

Does Oklahoma require separation before divorce?

Legal Separation Basics Unlike a divorce, there is not a residence period required to begin a separation action in Oklahoma. The spouse seeking a separation must file a petition and affidavit with the court.Like a no-fault divorce, a judge may grant a legal separation on no-fault grounds of irreconcilable differences.

What is considered legally separated in Oklahoma?

An Oklahoma Legal separation allows spouses to remain married but live separately. Without terminating the marriage, the Oklahoma court divides property and may award alimony and determine child custody during a legal separation action.

Is adultery grounds for divorce in Oklahoma?

Though we don't often think of the act of cheating as being illegal, adultery is illegal in 21 states.Cohabitation with another party within 30 days of an Oklahoma divorce is considered adultery too. It is also unlawful for a divorced party to remarry again in Oklahoma within six months of the decree of divorce.

Is it illegal to cheat on your spouse in Oklahoma?

Oklahoma considers evidence of adultery within 6 months of marriage as bigamy. This is a felony in the state. This is huge when it comes to child custody and monetary settlements. Oklahoma considers cohabitation with another party within 30 days of divorce as adultery.

How long do you have to be separated before divorce in Oklahoma?

Typically, you can be divorced in Oklahoma if you have been a resident of Oklahoma for at least six consecutive months before filing a petition for divorce with the district court.

Can you date while legally separated in Oklahoma?

A party in Oklahoma is restricted from remarrying within the state for a period of six months following the entry of the divorce decree. Oklahoma does not place restriction upon when a person can start dating.

Is it a felony to cheat on your spouse in Oklahoma?

Adultery is a felony in Oklahoma, punishable by up to 5 years in prison or up to a $500 fine.

How can I get a quick divorce in Oklahoma?

In Oklahoma, it is possible to obtain an uncontested divorce in as little as ten days through a process known as a "waiver divorce." A waiver divorce is an uncontested procedure that allows couples to end their marriage without the cost and delay common to traditional divorce.

Notes: This summary is not intended to be an all-inclusive summary of the laws of divorce in the State of Nevada, but does contain basic and other procedures.

Oklahoma law permits divorces based upon several different causes. Among the are:

1. Abandonment for one (1) year.
2. Adultery.
3. Impotence.
4. When wife at time of marriage is pregnant for someone other than her husband.
5. Extreme cruelty.
6. Fraudulent contract.
7. Habitual drunkenness.
8. Gross neglect of duty.
9. Imprisonment for the commission of a felony.
10. Insanity for a period of five (5) years, and
11. the no-fault ground of incompatibility of the parties. OSA 43-101

Oklahoma law requires that one of the spouses must be a resident of the state for a minimum of six (6) months immediately prior to the filing of the petition for divorce. OSA 43-102

The petition may be filed in the county where the plaintiff has been a resident for at least thirty (30) days, or where the defendant resides. OSA 43-103

Oklahoma law permits a spouse to bring an action for alimony against the other spouse without a divorce. The defenses to this action are the same as for a divorce action. OSA 43-129

In a divorce action involving minor children, the court will not issue a decree of divorce until ninety (90) days have elapsed from the date of the filing of the petition. In addition, it is unlawful for a party to divorce action to remarry (except to each other) or cohabit with another for six months from the date of decree. Any person who violates this provision is guilty of bigamy and may be imprisoned for a term of not less than one (1) year and not more than three (3) years in the State Penitentiary. OSA 43-107.1, 43-123

Either spouse may be awarded alimony out of real and personal property of the other spouse as the court deems reasonable. The court shall make such award either in a lump sum or in installments, as it deems reasonable and just. The obligation to pay alimony terminates upon the death or remarriage of the recipient or upon the voluntary cohabitation of the recipient with a member of the opposite sex. OSA 43-121

Oklahoma is an equitable distribution state. This means that the court will divide the marital property between the parties as it deems equitable and just. The court may divide the property in kind, or by setting aside the property to one party and requiring the other party to be paid in such amount as may be fair and just to effect and equitable division. OSA 43-121

Oklahoma courts will decide the issue of custody based upon the best interests of the child. Custody may be granted to either parent or to both parents jointly. When awarding custody, the court shall consider which parent is more likely to allow the child frequent and continuing contact with the other parent. Gender of the parties shall not be a consideration in determining custody of the child. If either or both parents have requested joint custody, the party so requesting shall submit to the court parenting plans detailing the arrangements for the care of the child. Such plans shall include provisions relating to the medical and dental care of the child, school placement, physical living arrangements for the child, child support obligations, and visitation rights. In determining custody, the child may express his or her preference, although the court shall not be bound by the preference expressed by the child. The court may require the parties to a divorce involving minor children to attend an educational program concerning the impact of divorce on children and conflict resolution between parents. The court may also order individual counseling, as it deems appropriate. OSA 43-112

The Oklahoma legislature has established child support guidelines which establish the presumptive correct amount of child support. Deviation from the guidelines require a specific finding by the court that application of the guidelines would be unjust or inappropriate and such findings must be included in the judgment. Child support orders may be modified upon a showing of material change in circumstances of the parties. A child shall be entitled to support until the child reaches eighteen (18) years of age. OSA 43-112

When a divorce is granted, the court may restore the wife to her maiden or former name if she so desires. OSA 43-121