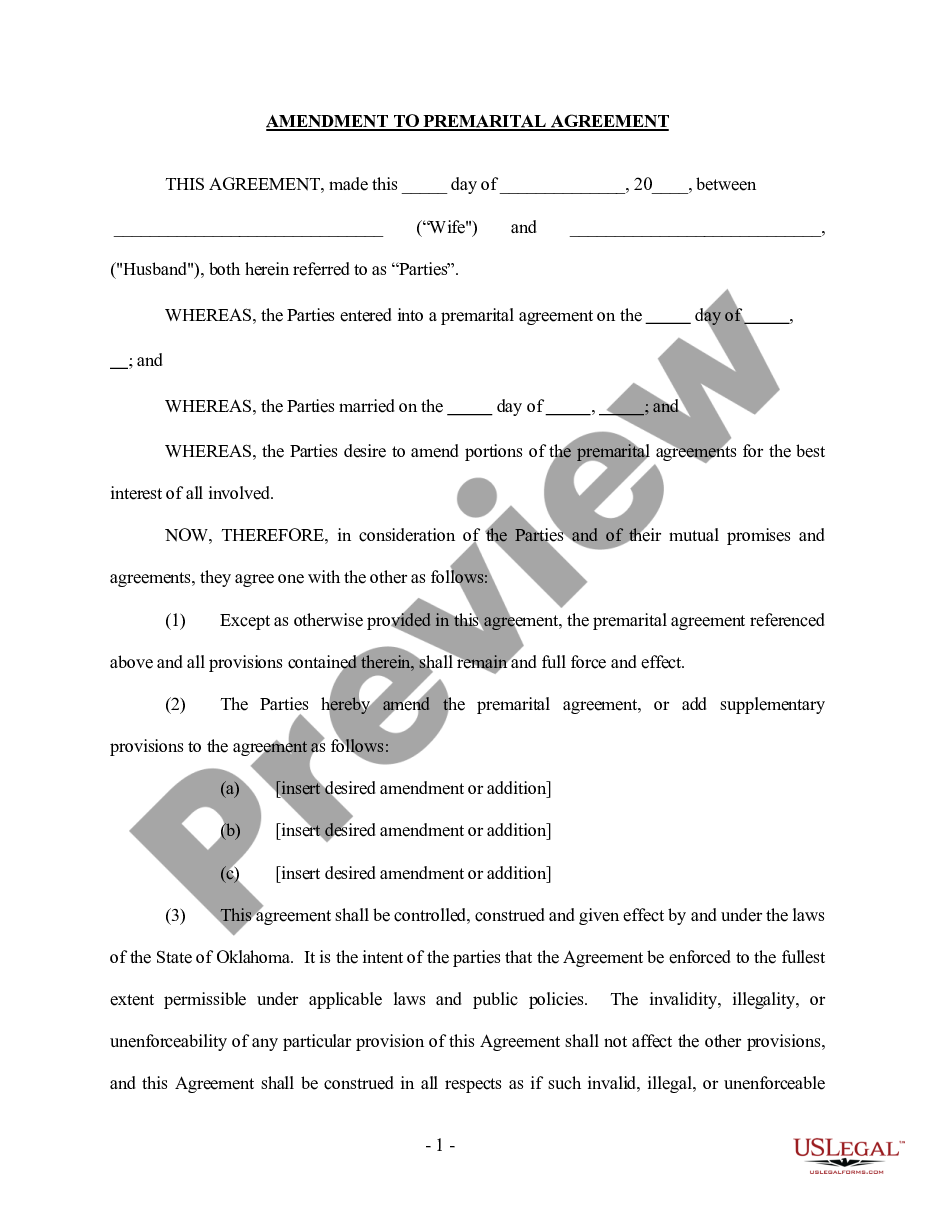 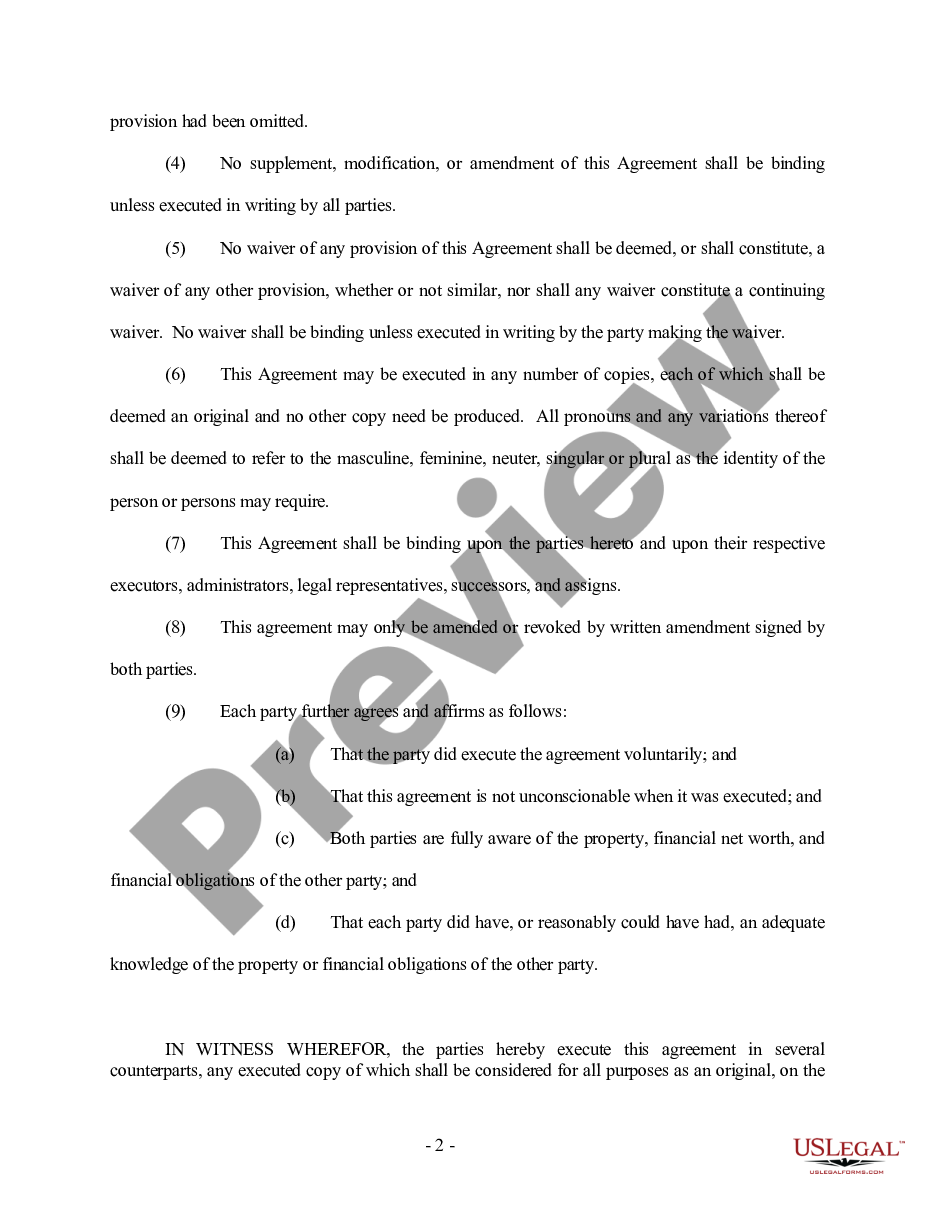 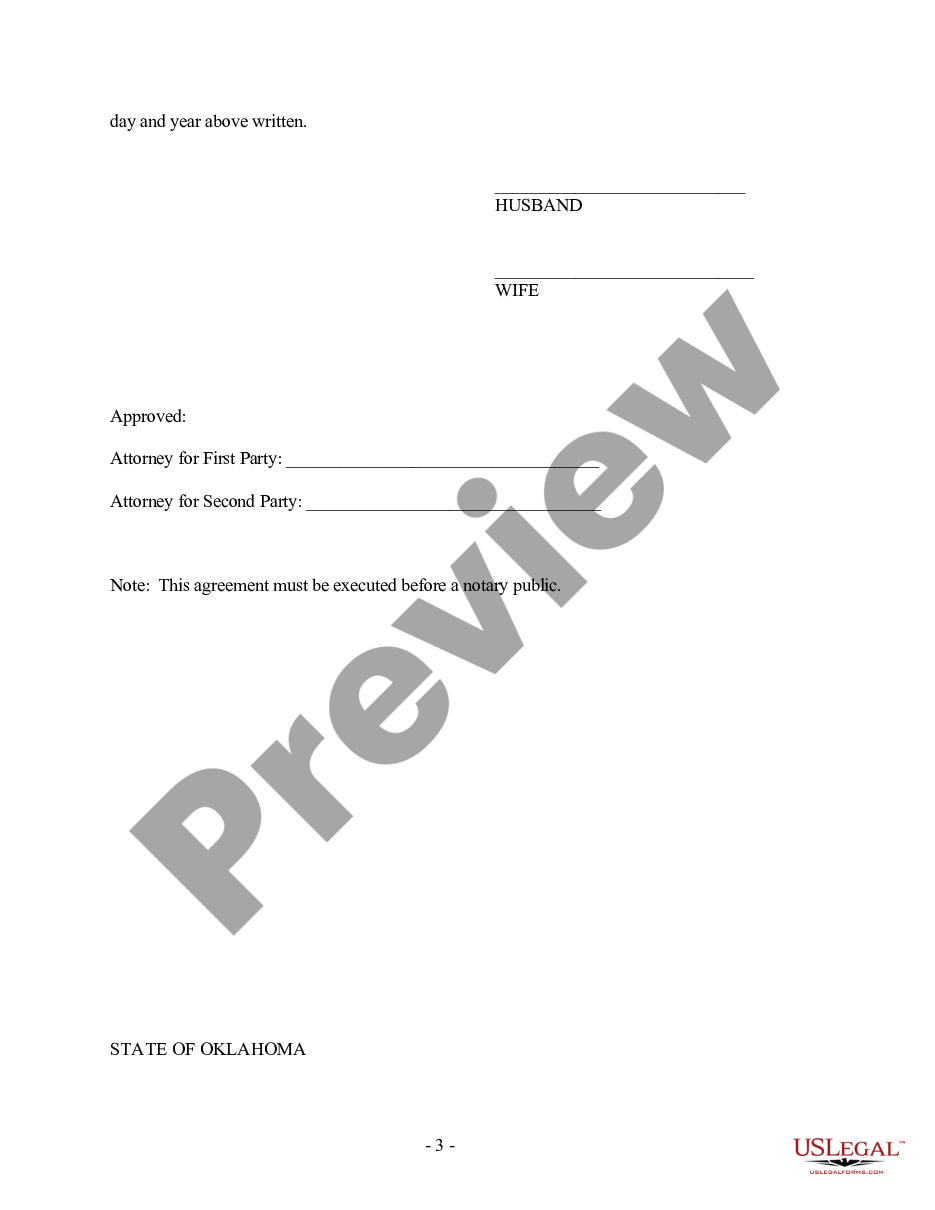 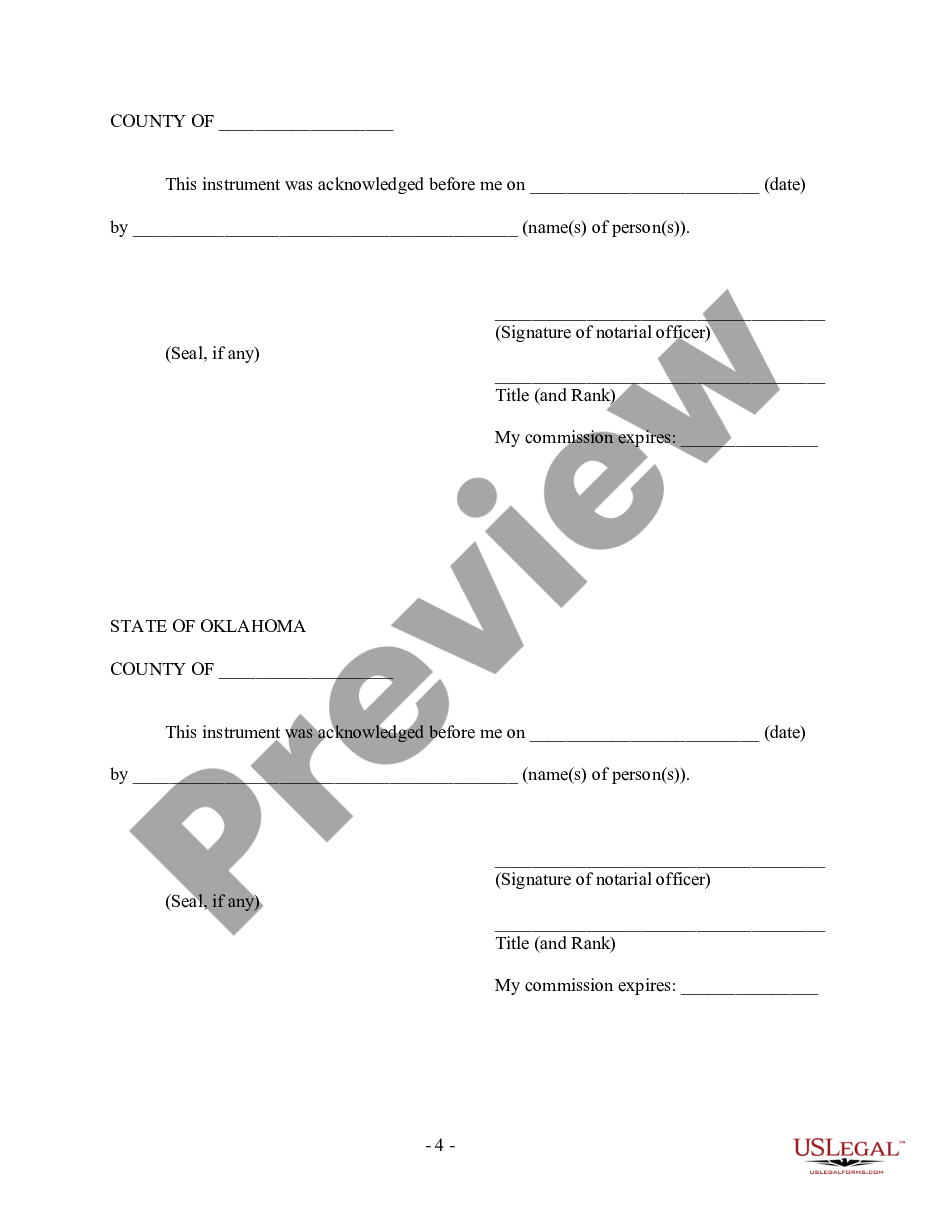 How To Fill Out Oklahoma Amendment To Prenuptial Or Premarital Agreement?

When it comes to submitting Oklahoma Amendment to Prenuptial or Premarital Agreement, you most likely think about an extensive procedure that involves choosing a perfect sample among a huge selection of very similar ones and after that having to pay an attorney to fill it out for you. Generally, that’s a sluggish and expensive choice. Use US Legal Forms and select the state-specific form in a matter of clicks.

If you don’t have an account yet but need one, keep to the step-by-step guideline listed below:

Skilled legal professionals work on creating our samples to ensure that after downloading, you don't have to worry about modifying content outside of your personal info or your business’s details. Be a part of US Legal Forms and get your Oklahoma Amendment to Prenuptial or Premarital Agreement sample now.

A premarital agreement must be in writing and signed by both parties. The agreement is enforceable without consideration. The agreement becomes effective on marriage of the parties.

How do you get a prenuptial agreement removed?

The amendment is typically written by a lawyer because of its legal nature. You'll have to have the entire agreement signed and notarized to make the changes valid. If, for whatever reason, you and your spouse decide to cancel your prenuptial agreement, you can use a document called a Release of Marital Agreement.

Can you amend a prenuptial agreement after marriage?

What makes a prenup unconscionable?

The court stated that, "An agreement is unconscionable if it is one which no person in his or her senses and not under delusion would make on the one hand, and no honest and fair person would accept on the other, the inequality being so strong and manifest as to shock the conscience and confound the judgment of any

Is a prenup void after 10 years?

Prenuptial agreements do not expire, unless they have a specific clause in them stating the agreement expires after a certain length of marriage (very uncommon).

What voids a prenuptial agreement?

What can make a prenup invalid?

What Could Invalidate a Prenup? Failing to fulfill any of California's prenuptial agreement requirements could result in a prenup the courts will not enforce. Examples include having a verbal contract, forcing one spouse to sign involuntarily, skipping legal requirements and including unfair terms in the agreement.

How do you override a prenuptial agreement?

Any indication of coercion or lack of willingness can give way for a divorce judge to overturn the agreement. A written agreement should be reviewed by an experienced family law attorney prior to completion of the agreement. Premarital agreements must be signed in front of witnesses and must be notarized.

Can prenuptial agreements be overturned?

Reasons a Judge Can Overturn a Prenuptial Agreement There are no specific rules that state what will overturn a prenup.A written agreement should be reviewed by an experienced family law attorney prior to completion of the agreement. Premarital agreements must be signed in front of witnesses and must be notarized.

Sometimes there are areas of law about which Uniform Acts are written and adopted by the various states. Premarital Agreements is such as area of law. The NATIONAL CONFERENCE OF COMMISSIONERS ON UNIFORM STATE LAWS adopted the final version of the Uniform Premarital Agreement Act in 1983. Since that date, the act, as modified by the various states, has been adopted in the following states: Arizona, Arkansas, California, Connecticut, Delaware, District of Columbia, Hawaii, Idaho, Illinois, Indiana, Iowa, Kansas, Maine, Montana, Nebraska, Nevada, New Jersey, New Mexico, North Carolina, North Dakota, Oregon, Rhode Island, South Dakota, Texas, Utah and Virginia. At the heart of the act is the provision which provides that such an agreement is generally valid if in writing and sets forth the factors to consider if the agreement is challenged. If your state has not adopted the Uniform Act, case law generally controls enforceability of the agreement.