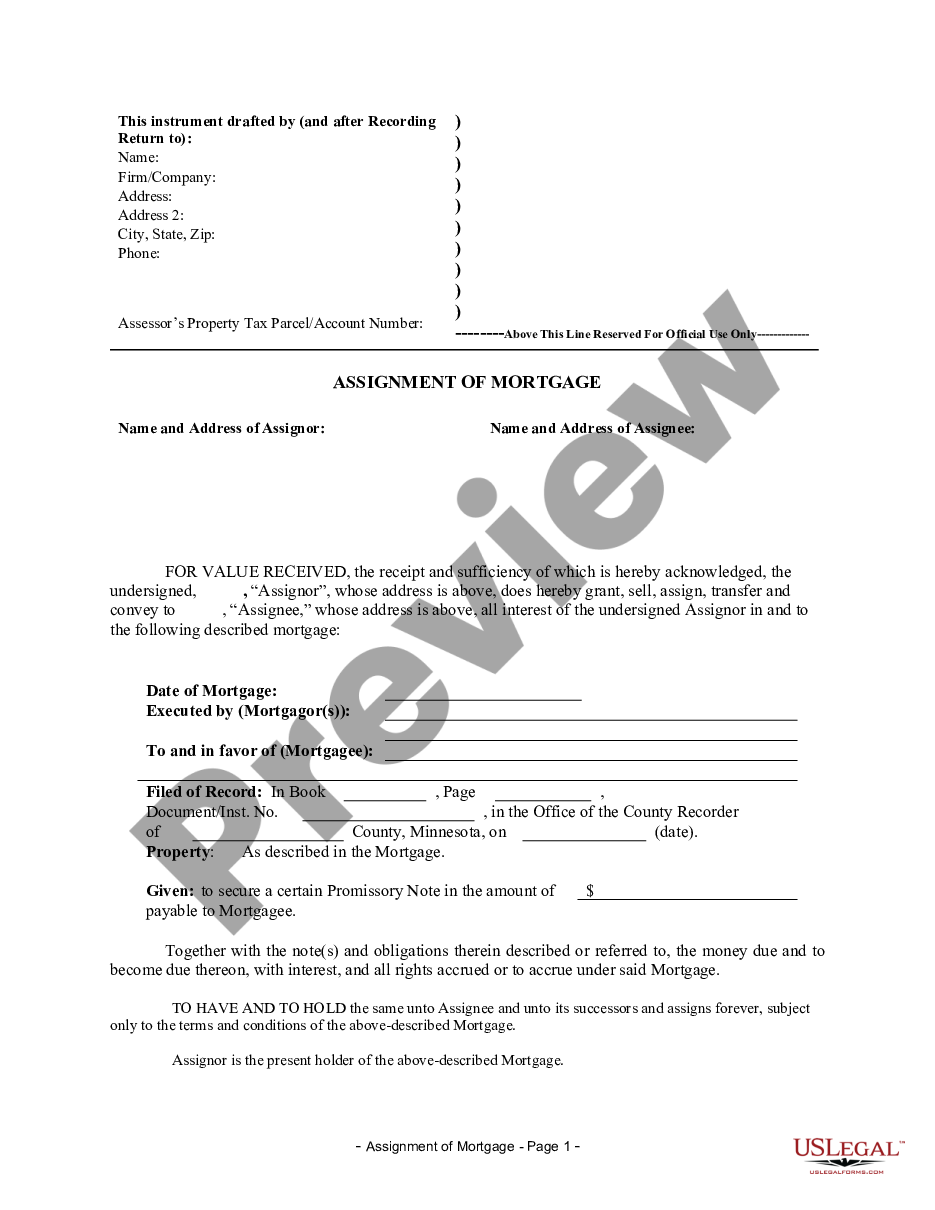 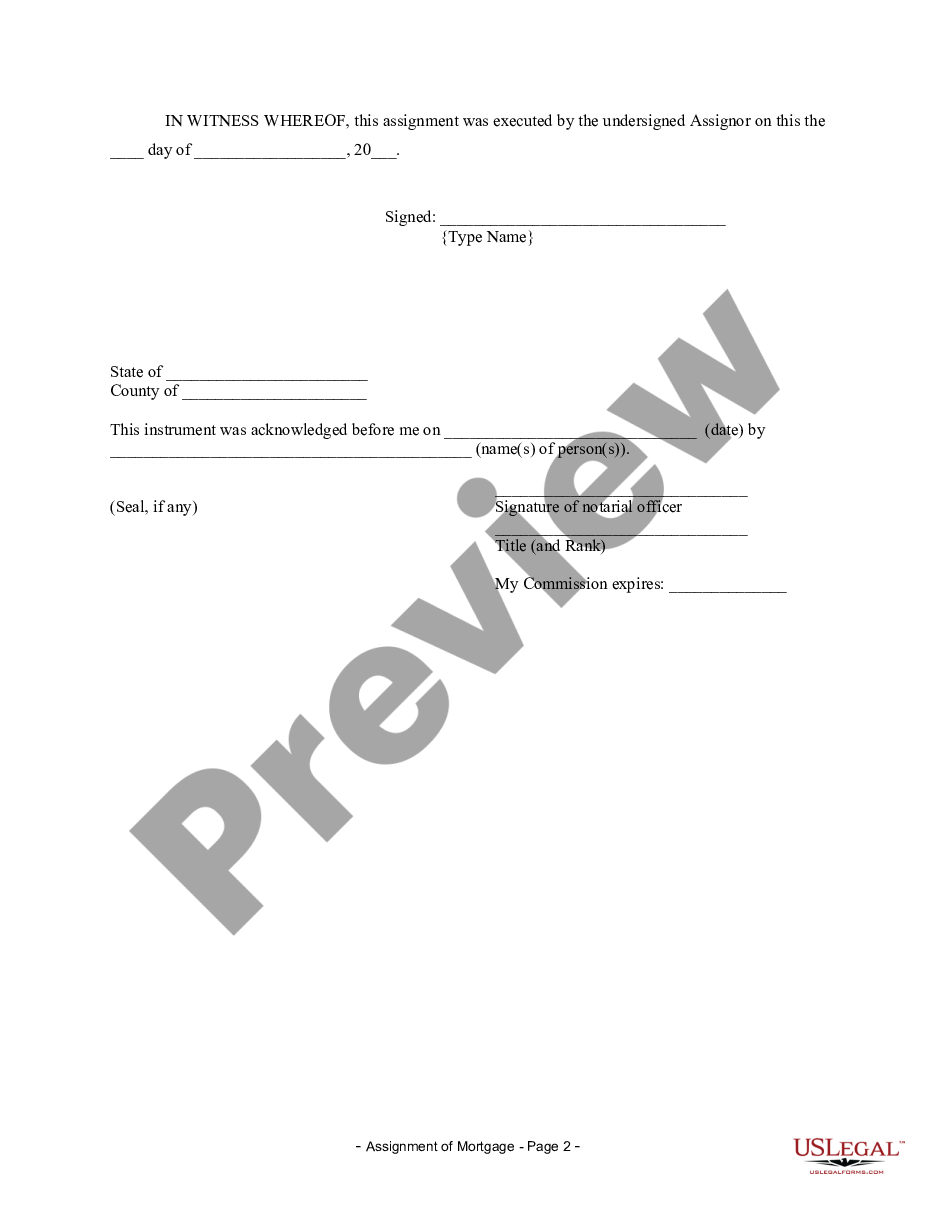 How To Fill Out Minnesota Assignment Of Mortgage By Individual Mortgage Holder?

Get any template from 85,000 legal documents such as Minnesota Assignment of Mortgage by Individual Mortgage Holder online with US Legal Forms. Every template is prepared and updated by state-accredited attorneys.

In case you haven’t subscribed yet, follow the steps listed below:

With US Legal Forms, you will always have instant access to the right downloadable template. The service will give you access to forms and divides them into groups to simplify your search. Use US Legal Forms to get your Minnesota Assignment of Mortgage by Individual Mortgage Holder fast and easy.

What is an assignment of mortgage document?

An assignment is the document that is the legal record of this transfer from one mortgagee to another. In a typical transaction, when the mortgagee sells the debt to another bank, an assignment is recorded and the promissory note is endorsed (signed over) to the new bank.

Lending institutions are responsible for preparing and filing the satisfaction of mortgage with the appropriate county recorder, land registry office, city registrar, or recorder of deeds. Some borrowers prepay their mortgages by making extra mortgage payments in an effort to pay off their mortgages faster.

Who signs the satisfaction of mortgage?

A Satisfaction of Mortgage is issued by the lender after they have received the final mortgage payment from the borrower. It's signed by the mortgagee (in the presence of a witness in some states and counties) and then notarized by a registered notary public.

How do I complete a satisfaction mortgage?

Execution of Assignment or Satisfaction:

Must be signed by the Mortgagee.

Recording Satisfaction: A mortgage may be discharged by filing for record a certificate of its satisfaction executed and acknowledged by the mortgagee.

Penalty: Mortgagee liable for all actual damages for failure to record satisfaction under 507.41 or 47.208. In addition, a $500 penalty applies when failing to meet the deadline of 47.208.

47.208 Delivery of satisfaction of mortgage.

Upon written request, a good and valid satisfaction of mortgage in recordable form shall be delivered to any party paying the full and final balance of a mortgage indebtedness that is secured by Minnesota real estate; such delivery shall be in hand or by certified mail postmarked within 45 days of the receipt of the written request to the holder of any interest of record in said mortgage and within 45 days of the payment of all sums due thereon.

Subd. 2. Penalty. If a lender fails to comply with the requirements of subdivision 1, the lender may be held liable to the party paying the balance of the mortgage debt, for a civil penalty of up to $500, in addition to any actual damages
caused by the violation.

A mortgage may be discharged by filing for record a certificate of its satisfaction executed and acknowledged by the mortgagee, the mortgagee's personal representative, or assignee, as in the case of a conveyance. The county recorder shall enter the number of such certificate and the book and page of its record upon the record of the mortgage or on a microfilm card whenever possible. If a mortgage be recorded in more than one county and discharged of record in one of them, a certified copy of such discharge may be recorded in another county with the same effect as the original. If the discharge be by marginal entry, heretofore made, such copy shall include the record of the mortgage. In all cases the discharge shall be entered in the reception book and indexes as conveyances are entered.

(a) The definitions in this subdivision apply to this section.

(b) "Assignment of rents and profits" means an assignment, whether in a separate document or in a mortgage, of any of the benefits accruing under a recorded or unrecorded lease or tenancy existing, or subsequently created, on property encumbered by a mortgage, which is given as additional security for the debt secured by the mortgage.(c) "Mortgage" means a mortgage or mortgage lien, including any assignment of rents and profits given as additional security for the debt secured by that lien, on an interest in real property in this state given to secure a loan in the original principal amount of $1,500,000 or less. (d) "Mortgagee" means:(1) the grantee of a mortgage; or (2) if a mortgage has been assigned of record, the last person to whom the mortgage has been assigned of record.(e) "Mortgage servicer" means the last person to whom a mortgagor or the mortgagor's successor in interest has been instructed by a mortgagee to send payments on a loan secured by a mortgage. A person transmitting a payoff statement is the mortgage servicer for the mortgage described in the payoff statement. (f) "Mortgagor" means the grantor of a mortgage. (g) "Partial release" means the release of specified parcels of land from a mortgage. (h) "Payoff statement" means a statement of the amount of: (1) the unpaid balance of a loan secured by a mortgage, including principal, interest, and any other charges properly due under or secured by the mortgage, and interest on a per day basis for the unpaid balance; or (2) the portion of the unpaid balance of the loan secured by the mortgage required by the mortgagee or mortgage servicer to be paid as a condition for the issuance of a partial release. (i) "Record" means to record with the county recorder or file with the registrar of titles. (j) "Title insurance company" means a corporation or other business entity authorized and licensed to transact the business of insuring titles to interests in real property in this state under chapter 68A.

Subd. 7. Application. This section applies only to a mortgage in the original principal amount of $1,500,000 or less.

507.41 Penalty for failure to discharge.