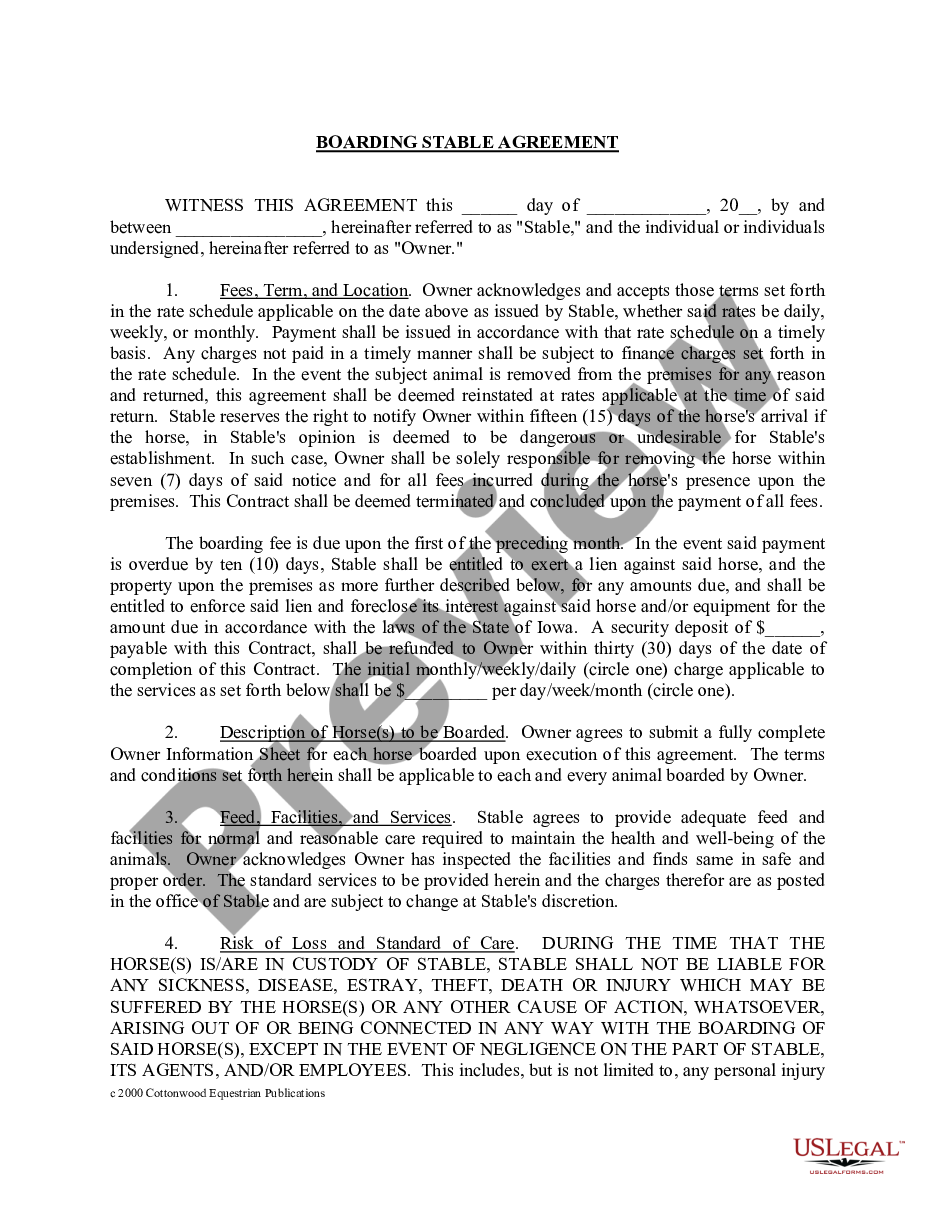 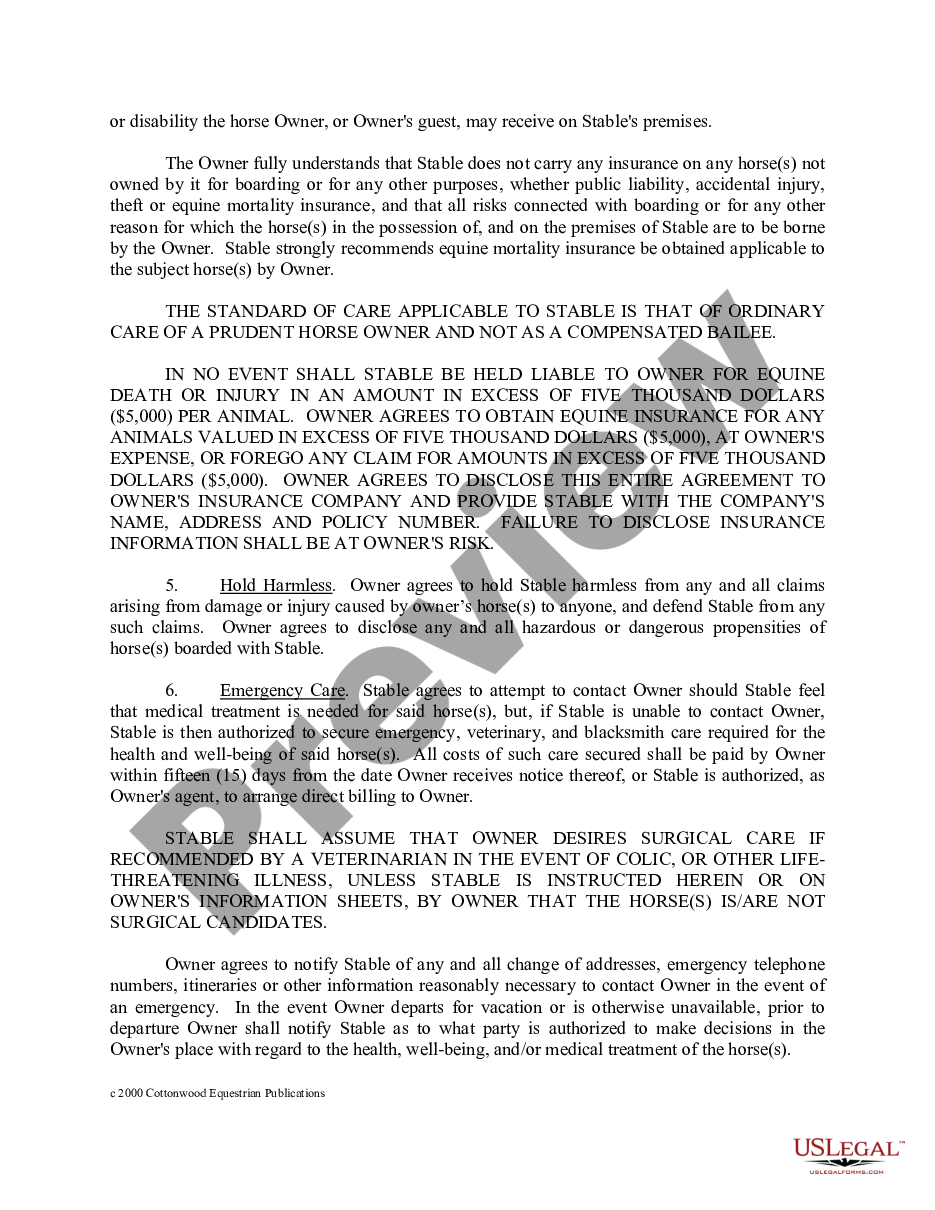 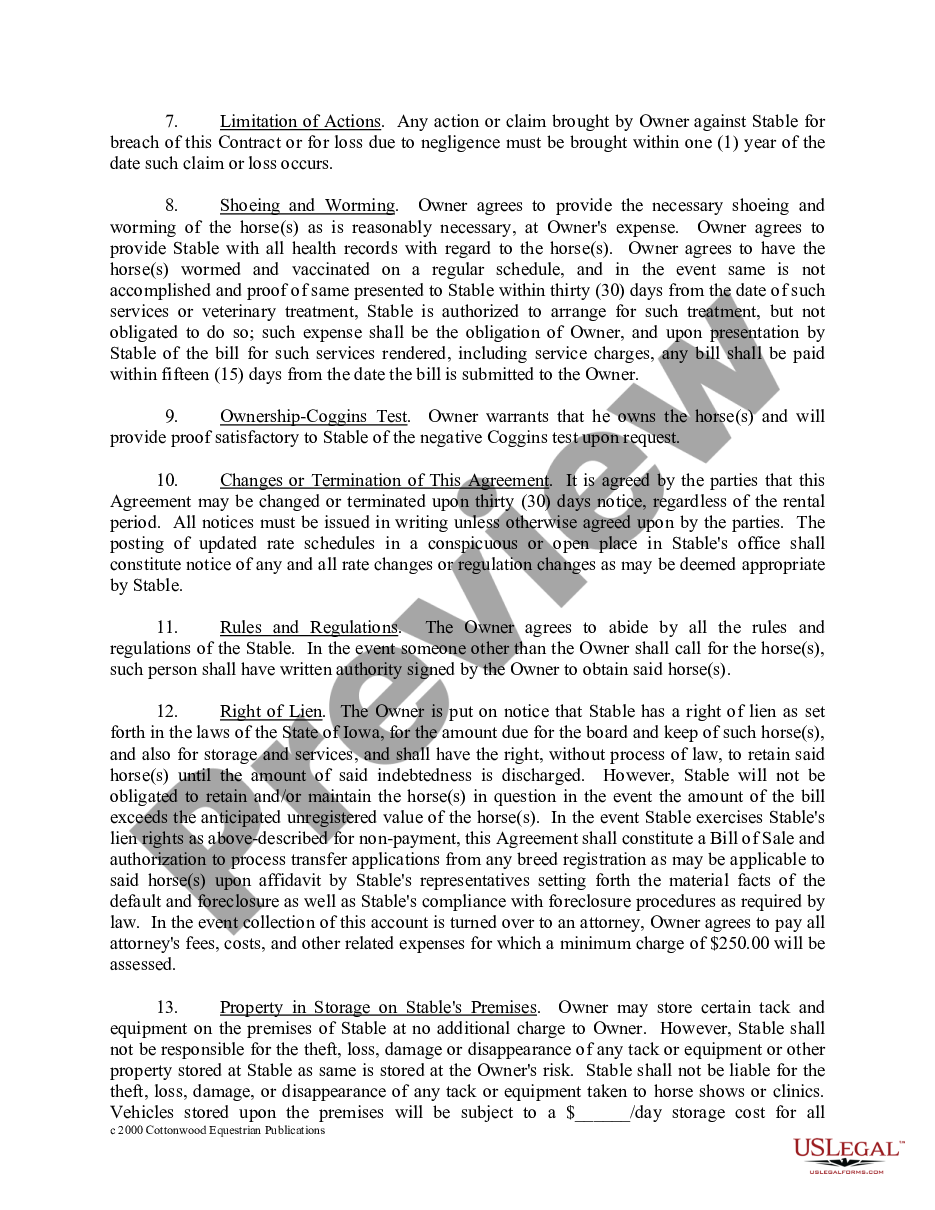 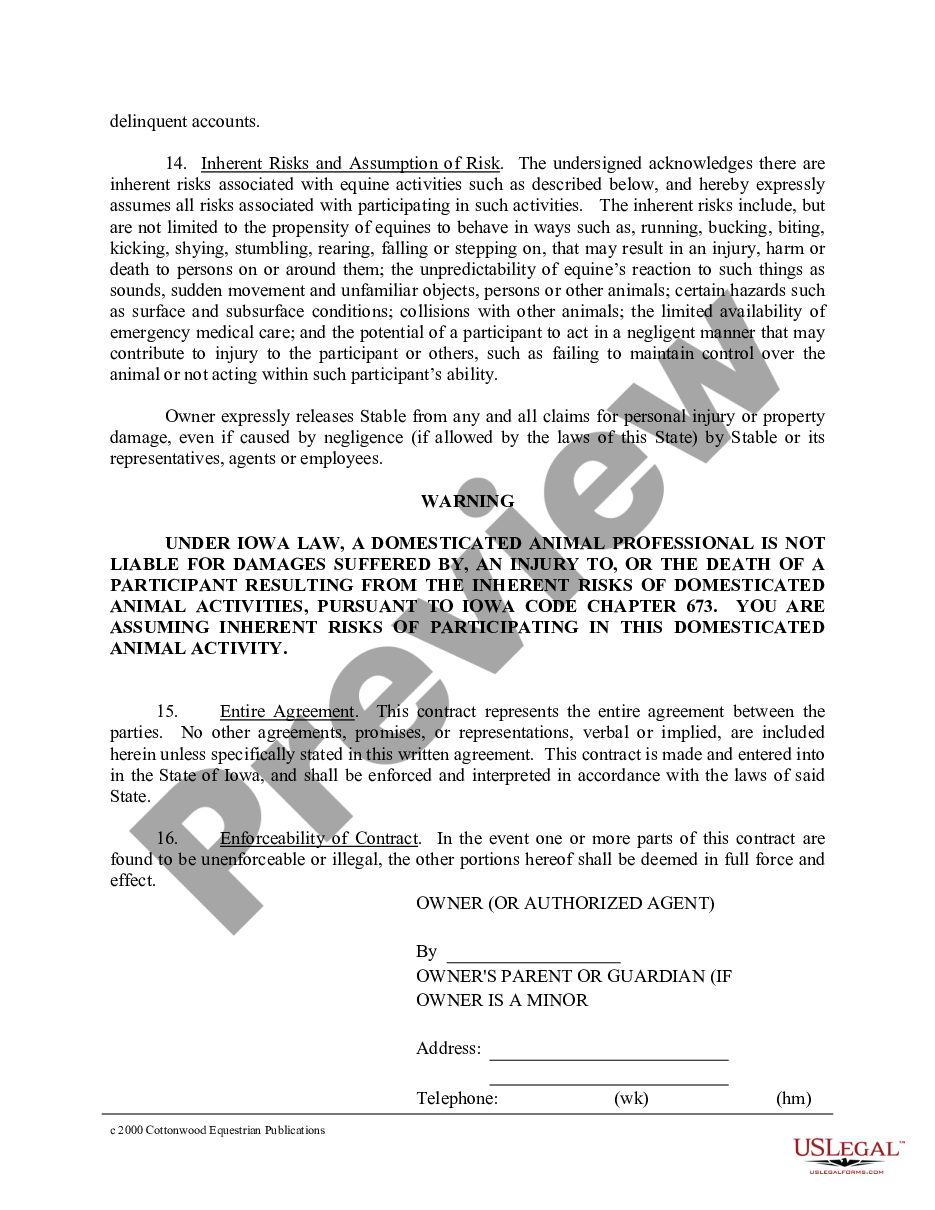 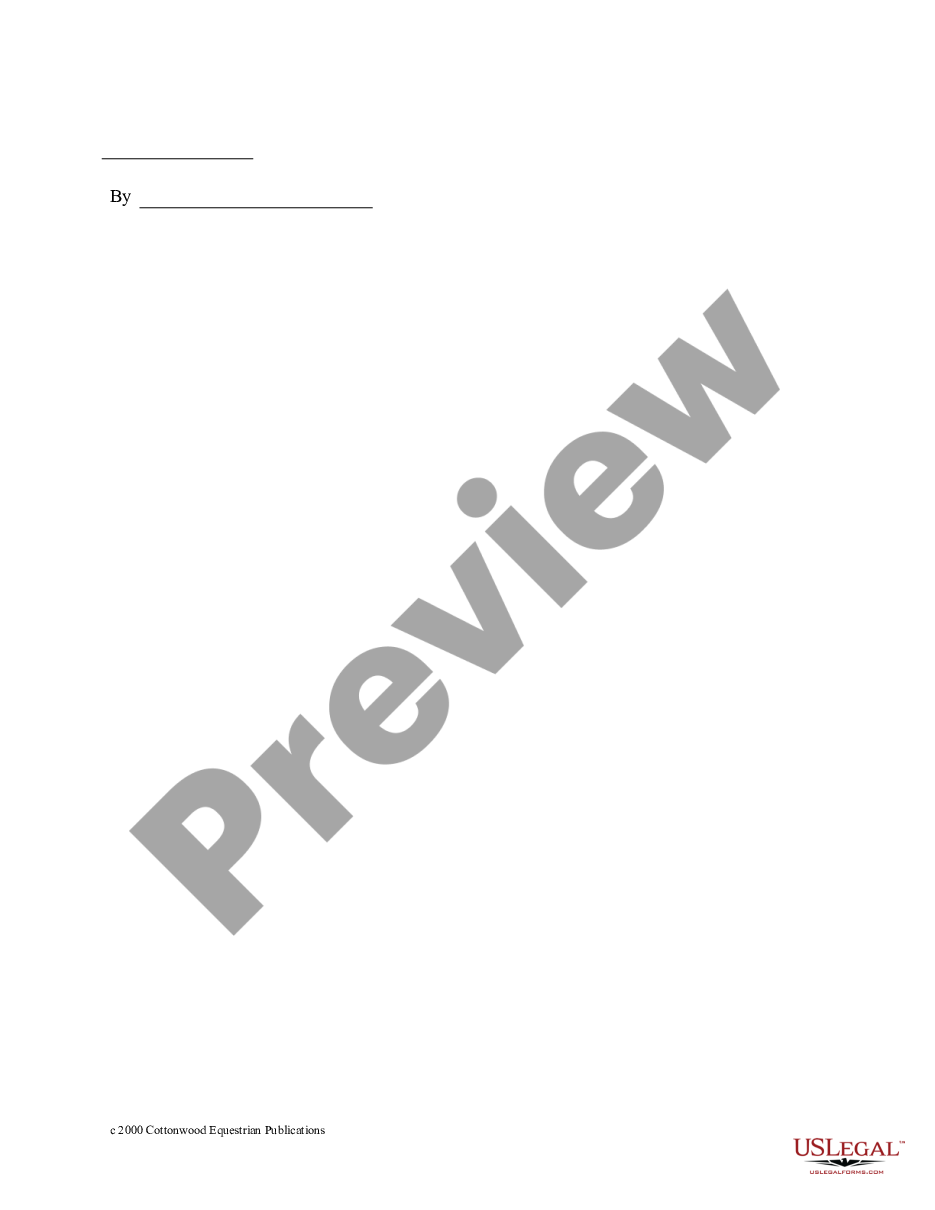 This Boarding Stable Agreement Horse Equine form is a boarding stable agreement between the owner of a stable and a horse owner. It is very detailed and includes provisions dealing with fees, cost, liability, standard of care, emergency care, risk of loss and other provisions.

Get the most holistic catalogue of legal forms. US Legal Forms is a platform where you can find any state-specific document in clicks, including Iowa Boarding Stable Agreement - Horse Equine Forms examples. No reason to spend several hours of the time searching for a court-admissible example. Our qualified specialists ensure that you receive updated samples all the time.

To take advantage of the forms library, select a subscription, and sign-up your account. If you did it, just log in and then click Download. The Iowa Boarding Stable Agreement - Horse Equine Forms sample will instantly get stored in the My Forms tab (a tab for every form you download on US Legal Forms).

To create a new profile, look at short guidelines below:

That's all! You ought to complete the Iowa Boarding Stable Agreement - Horse Equine Forms template and double-check it. To make certain that everything is precise, call your local legal counsel for assist. Register and simply find more than 85,000 useful forms.

Upgrade and Save: Buy our Horse Forms Package and Save!

What does horse boarding include?

Full board will include all the necessities for the horse, plus a stall with full turn out to pasture. Full board does not require owners to visit their horses every day; instead, staff at the barn clean the stall, feed the horse, and bring him in/out of the pasture.

How much does insurance cost for a horse boarding facility?

Boarders may want to take out equine liability insurance in case of accidents, such as a horse getting loose and getting hit by a car, or otherwise injuring someone. The average price for $500,000 worth of coverage is $250 annually, and covers up to four horses.

What is needed to start a horse boarding business?

Scope out legalities. Consider zoning, business permits and your state's lien laws. Evaluate your facilities. Investigate the cost of liability insurance. Research your market. Crunch the numbers. Draw up a legal boarding contract.

Do you need insurance to board horses?

Do you need insurance on a horse?

On top of the Full Mortality (life insurance) on your horse, you should consider Major Medical Insurance (health insurance). Upwards of 90% of the claims we see in our office are Major Medical claims, and not mortality claims. Horses tend to get sick or hut more than they die.

How much can you charge for horse boarding?

The cost of boarding averages $400 to $500 per month but can go as high as $1,200 to $2,500 in metropolitan areas. Services such as mucking out stalls, feeding and turning out your horse to pasture may not be included in the price. For those lucky enough to own sufficient land, there are still costs to consider.

Is it cheaper to board a horse?

If you have the space and facility to keep your equines at home, it's more cost effective and offers a number of advantages that boarding does not.Keeping a horse on full board offers owners virtually hassle-free maintenance. Full board includes, at the very least, feeding, stall cleaning and turnout.

Numbers Game. The reality is that boarding facilities operate on slim profit margins. By the time costs are considered for hay, grain, bedding, labor for feeding, cleaning stalls, doing turnout, etc., the board fees typically do not leave a lot left over, Sherrick-von Schiller said.Labor costs are also significant.

How much can you make boarding horses?

Full board will include all the necessities for the horse, plus a stall with full turn out to pasture. Full board does not require owners to visit their horses every day; instead, staff at the barn clean the stall, feed the horse, and bring him in/out of the pasture.


A number of inherent risks are associated with a domesticated animal activity. A domesticated animal may behave in a manner that results in damages to property or an injury or death to a person. Risks associated with the activity may include injuries caused by bucking, biting, stumbling, rearing, trampling, scratching, pecking, falling, or butting.

The domesticated animal may react unpredictably to conditions, including but not limited to a sudden movement, loud noise, an unfamiliar environment, or the introduction of unfamiliar persons, animals, or objects.

The domesticated animal may also react in a dangerous manner when a condition or treatment is considered hazardous to the welfare of the animal; a collision occurs with an object or animal; or a participant fails to exercise reasonable care, take adequate precautions, or use adequate control when engaging in a domesticated animal activity, including failing to maintain reasonable control of the animal or failing to act in a manner consistent with the person's abilities.