Texas Assignment of Deed of Trust by Corporate Mortgage Holder 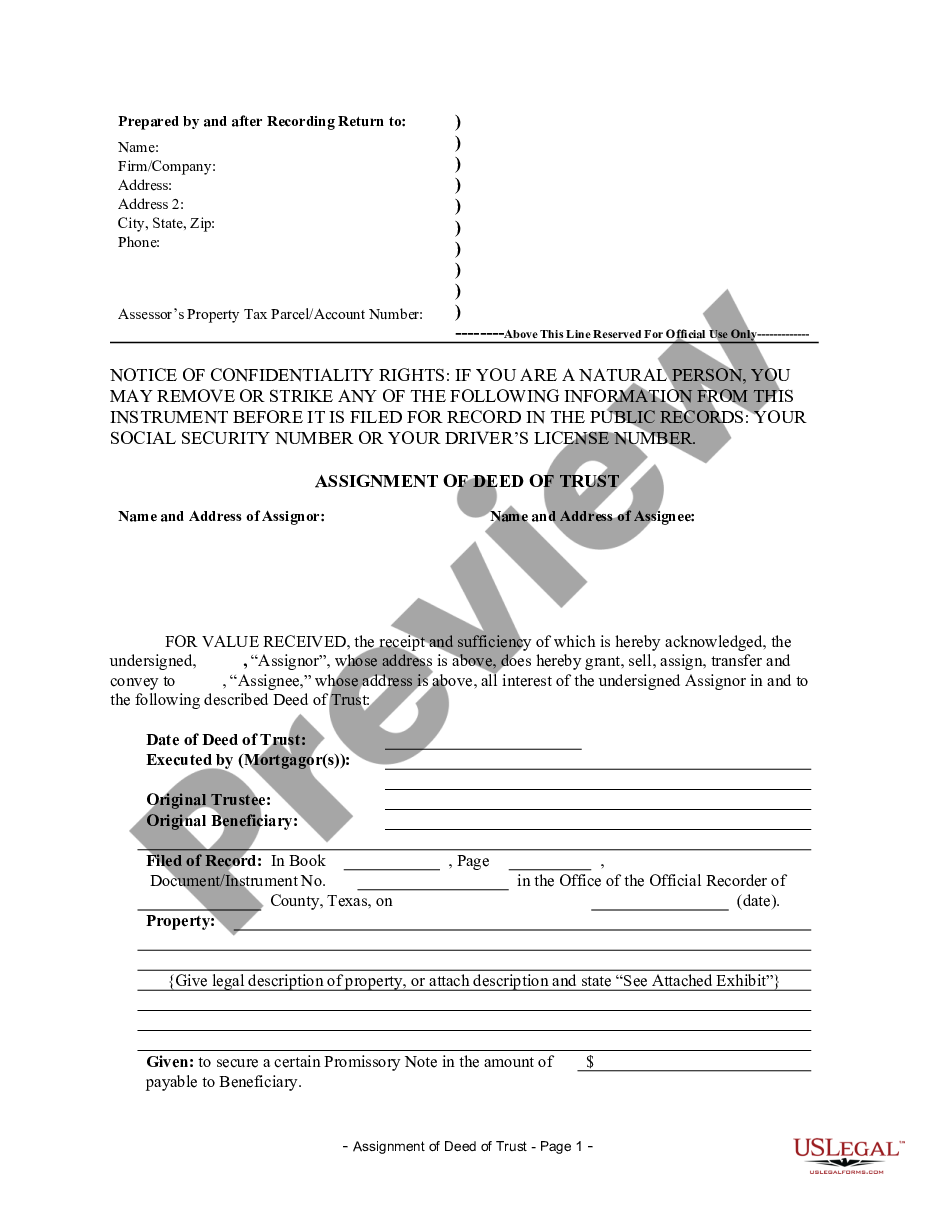 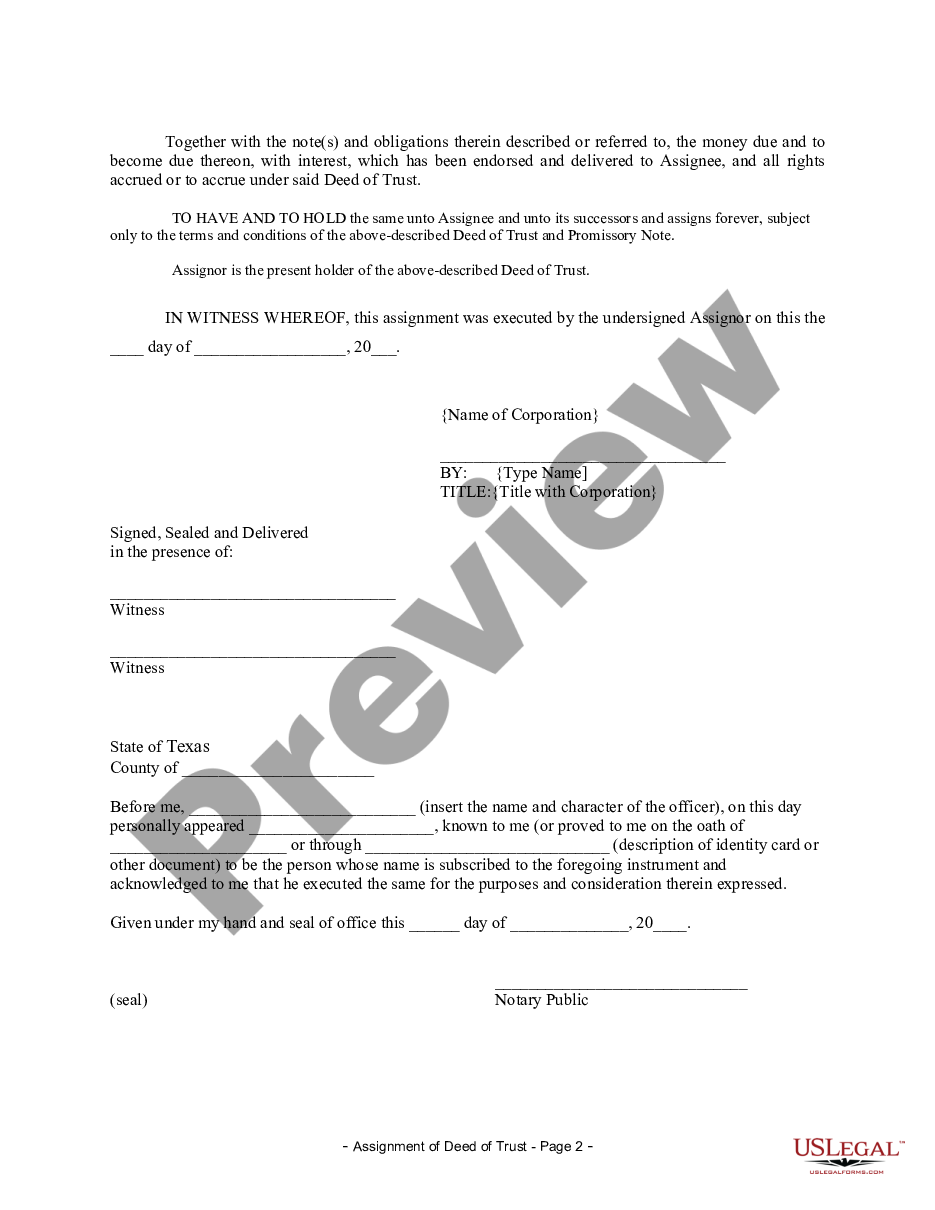 Assignment of Deed of Trust by Corporate Mortgage Holder

There are no provisions requiring a Texas creditor to release a fully paid debt, but if a creditor fails to do so within 60 days of full payoff, a representative of a title insurance company may record an affidavit which releases the lien described in the affidavit.

(a) An instrument concerning real or personal property may be recorded if it has been acknowledged, sworn to with a proper jurat, or proved according to law.

(a) A master form of a mortgage or deed of trust may be recorded in any county without acknowledgement or proof. The master form must contain on its face the designation: "Master form recorded by (name of person causing the recording)."

(b) The county clerk shall index a master form under the name of the person causing the recording and indicate in the index and records that the document is a master mortgage.

(c) The parties to an instrument may incorporate by reference a provision of a recorded master form with the same effect as if the provision were set out in full in the instrument. The reference must state:

(1) that the master form is recorded in the county in which the instrument is offered for record;

(2) the numbers of the book or volume and first page of the records in which the master form is recorded; and

(3) a definite identification of each provision being incorporated.

(e) The provisions of the Uniform Commercial Code prevail over this section.

(a) In this section:

(1) "Mortgage" means a deed of trust or other contract lien on an interest in real property.

(A) the grantee of a mortgage;

(4) "Mortgagor" means the grantor of a mortgage.

(5) "Payoff statement" means a statement of the amount of:

(A) the unpaid balance of a loan secured by a mortgage, including principal, interest, and other charges properly assessed under the loan documentation of the mortgage; and

(B) interest on a per diem basis for the unpaid balance.

(6) "Title insurance company" means a corporation or other business entity authorized and licensed to transact the business of insuring titles to interests in real property in this state.

(b) This section applies only to a mortgage on property consisting exclusively of a one-to-four-family residence, including a residential unit in a condominium regime.

(d) An affidavit executed under this section must state that:

(1) the affiant is an authorized officer of a title insurance company;

(3) the mortgagee provided a payoff statement with respect to the loan secured by the mortgage;

(4) the affiant has ascertained that the mortgagee has received payment of the loan secured by the mortgage in accordance with the payoff statement, as evidenced by:

(A) a bank check, certified check, escrow account check from the title company or title insurance agent, or attorney trust account check that has been negotiated by the mortgagee; or

(B) another documentary evidence of the receipt of payment by the mortgagee;

(5) more than 60 days have elapsed since the date payment was received by the mortgagee;

(6) the title insurance company or its agent has given the mortgagee at least 15 days' notice in writing of its intention to execute and record an affidavit in accordance with this section, with a copy of the proposed affidavit attached to the written notice; and

(f) The affiant must attach to the affidavit a photostatic copy, certified as a true copy of the original document, of:

(1) the documentary evidence that payment has been received by the mortgagee, including the mortgagee's endorsement of a negotiated check if paid by check; and

(g) An affidavit that is executed and recorded as provided by this section operates as a release of the mortgage described in the affidavit.

(i) A person who knowingly causes an affidavit with false information to be executed and recorded under this section is liable for the penalties for filing a false affidavit, including the penalties for commission of offenses under Section 37.02 PROP. of the Penal Code, and to a party injured by the affidavit for actual damages or $5,000, whichever is greater. The attorney general may sue to collect the penalty. If the attorney general or an injured party bringing suit substantially prevails in an action under this subsection, the court may award reasonable attorney's fees and court costs to the prevailing party.