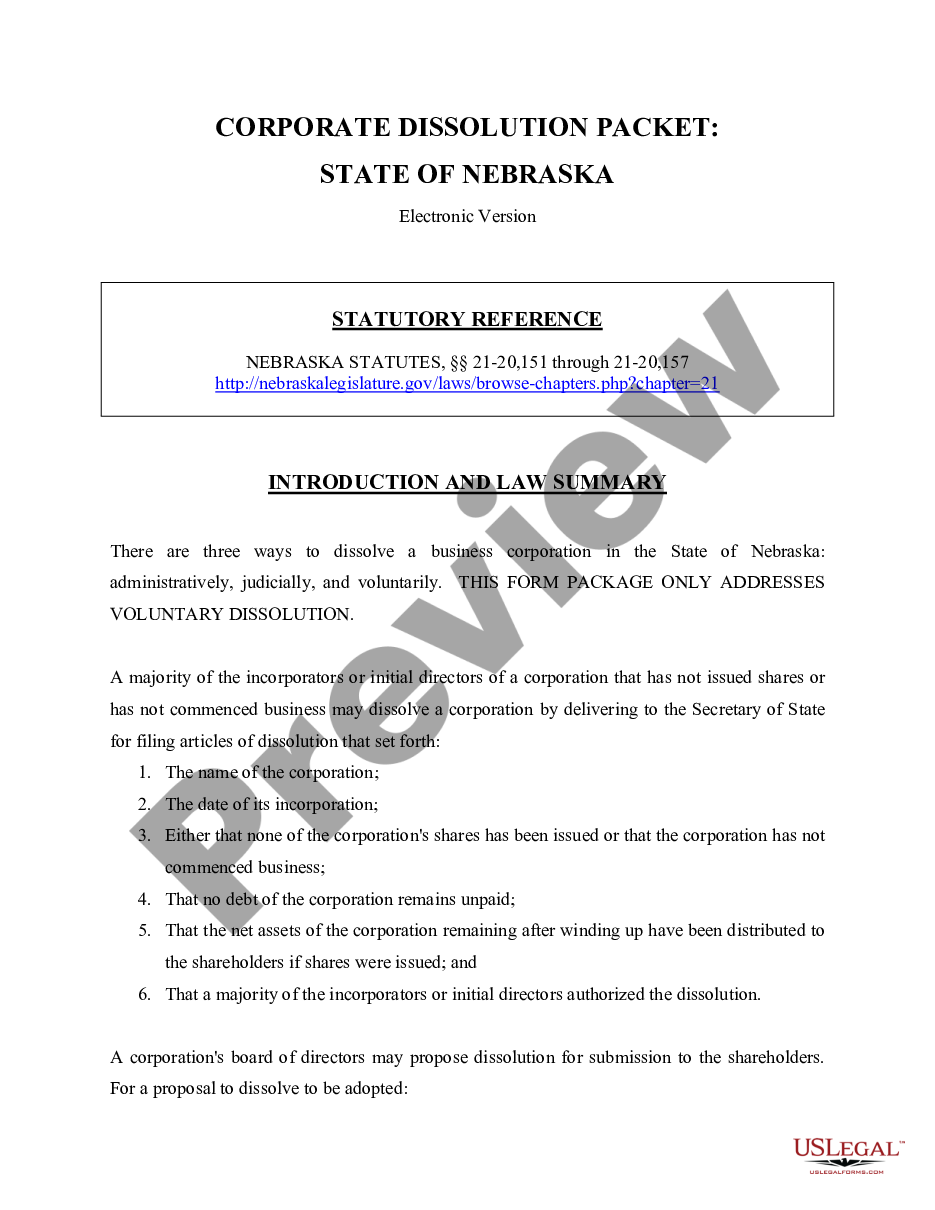 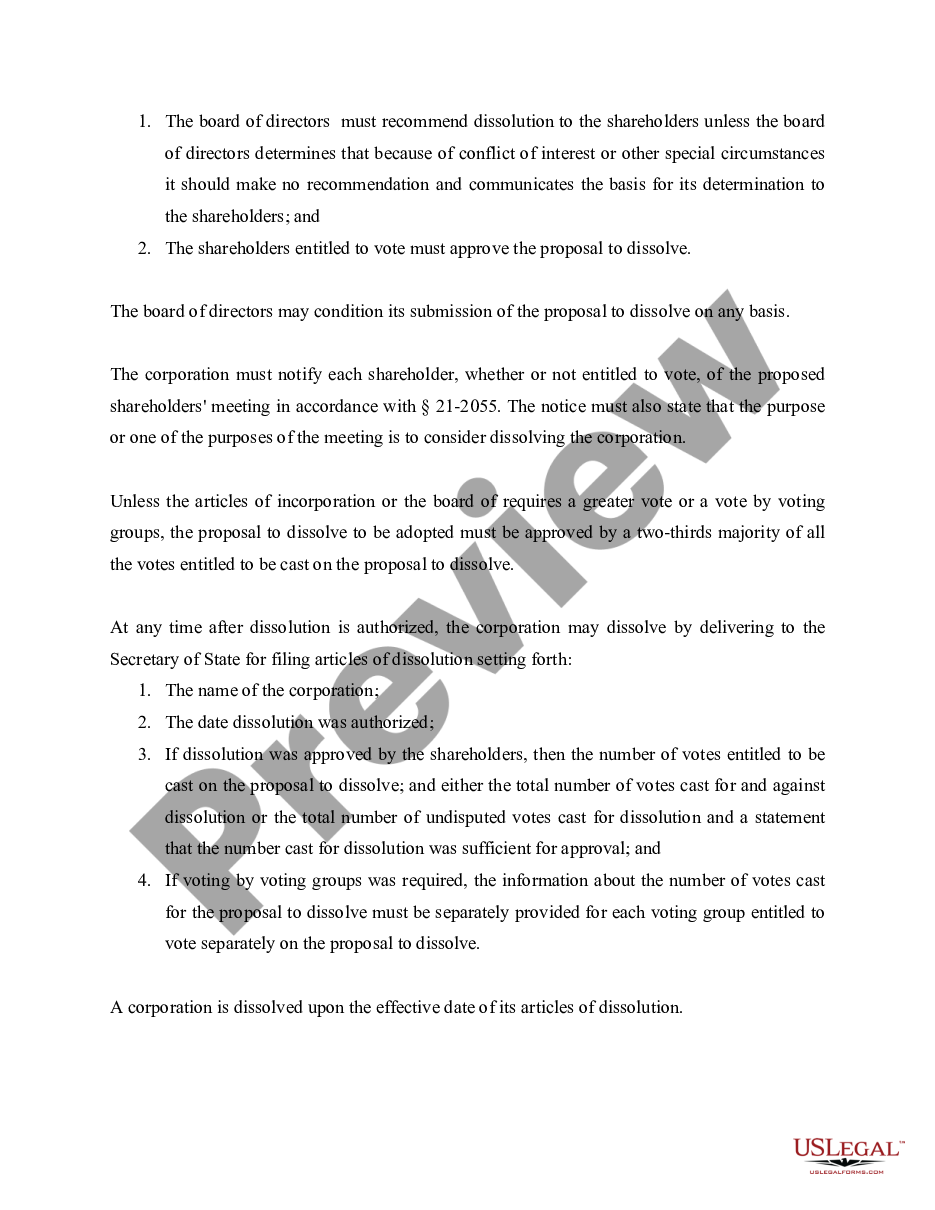 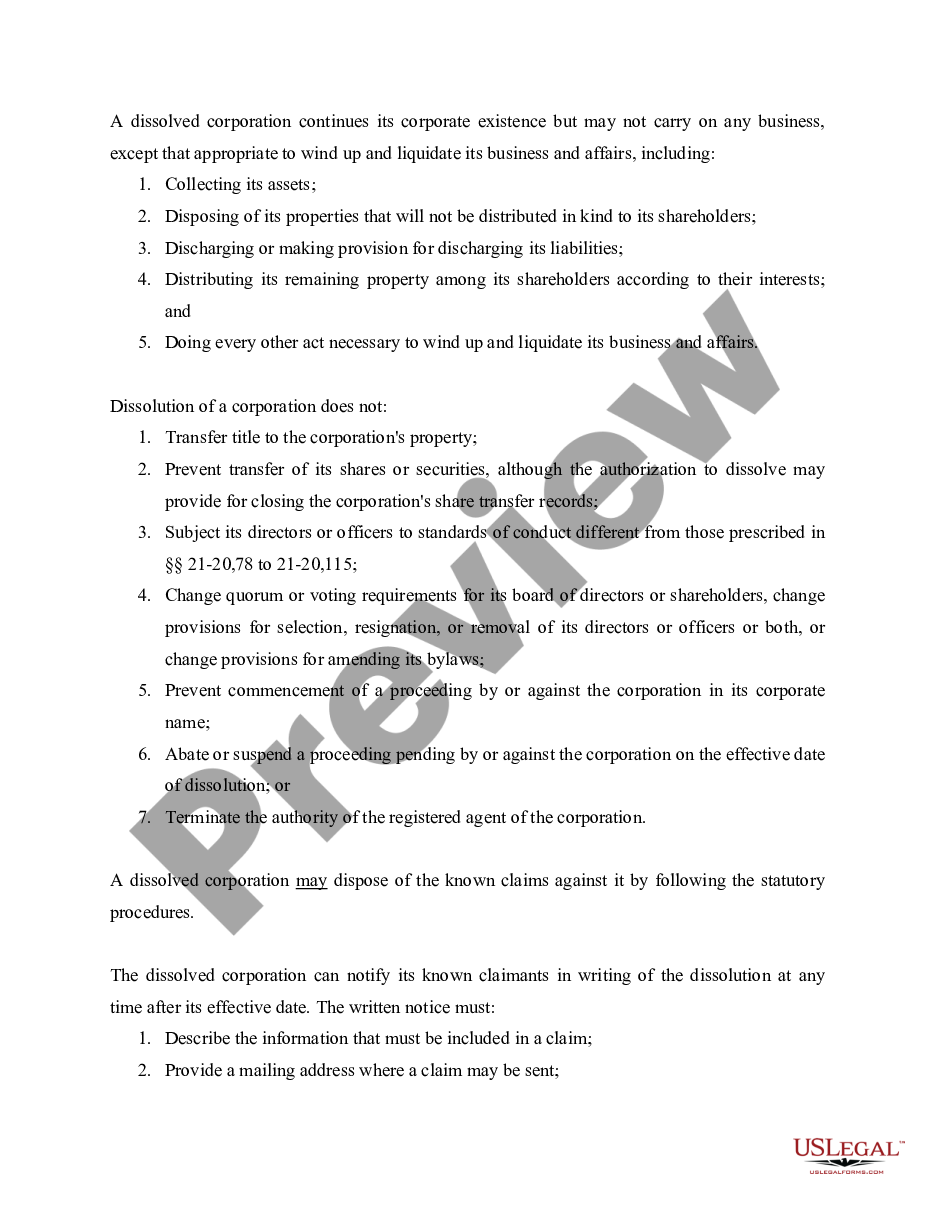 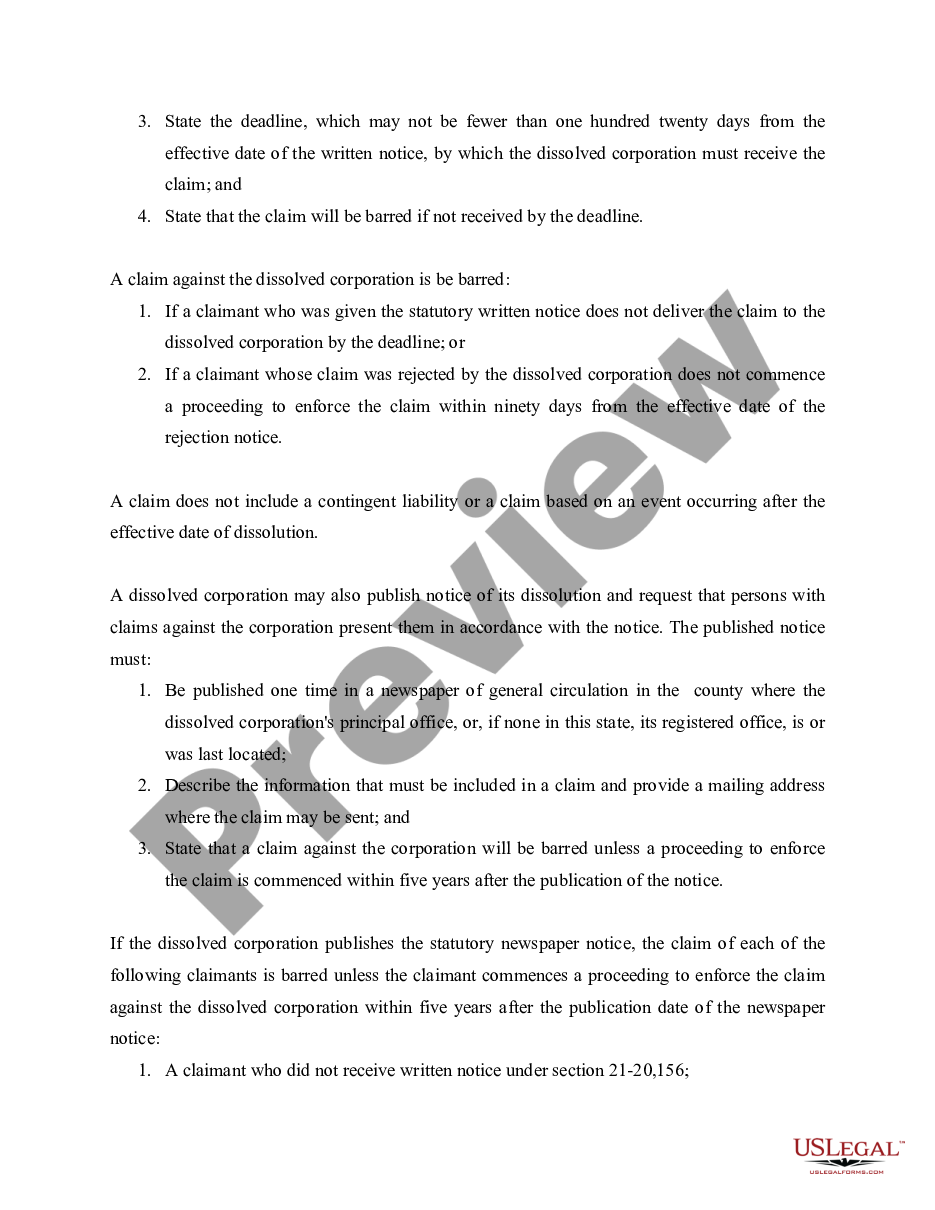 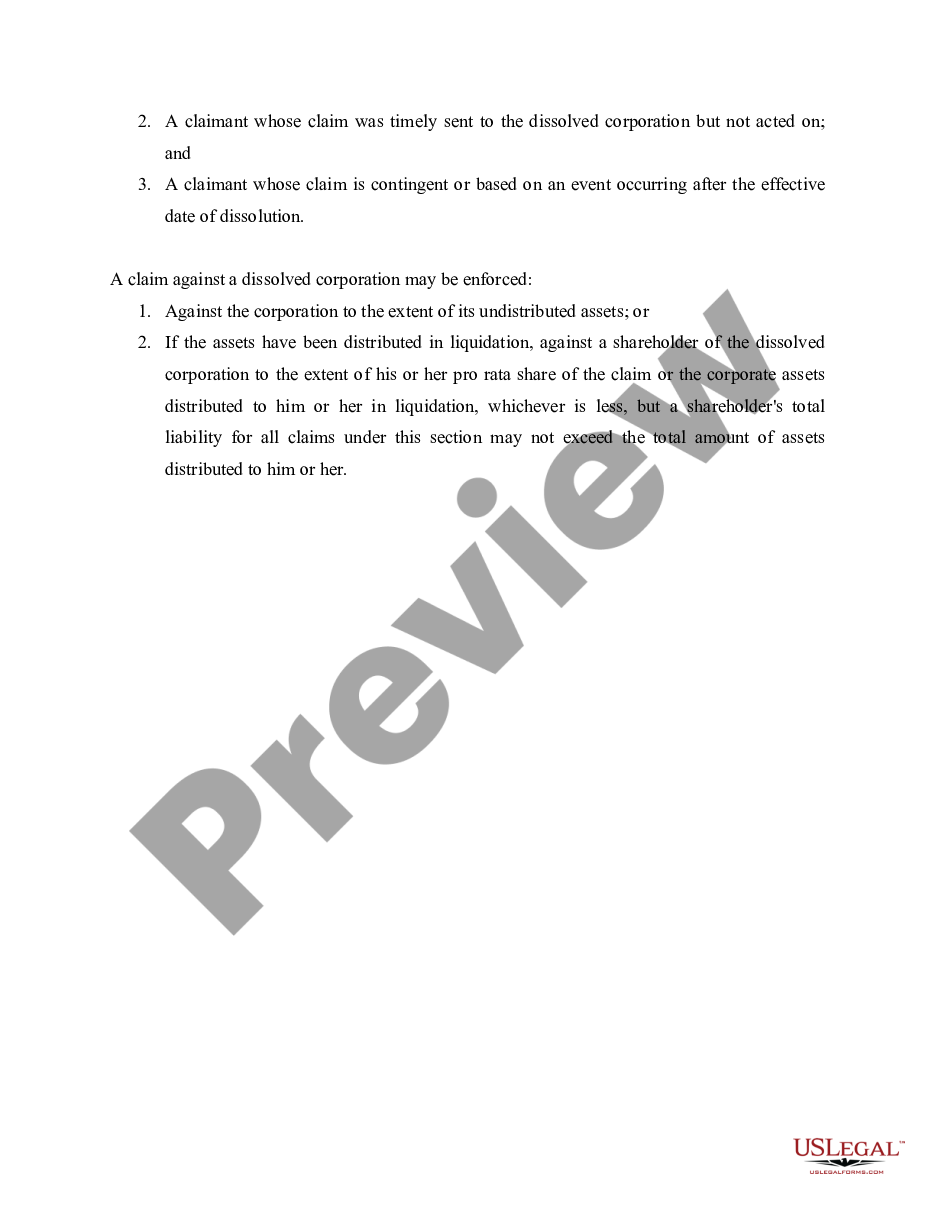 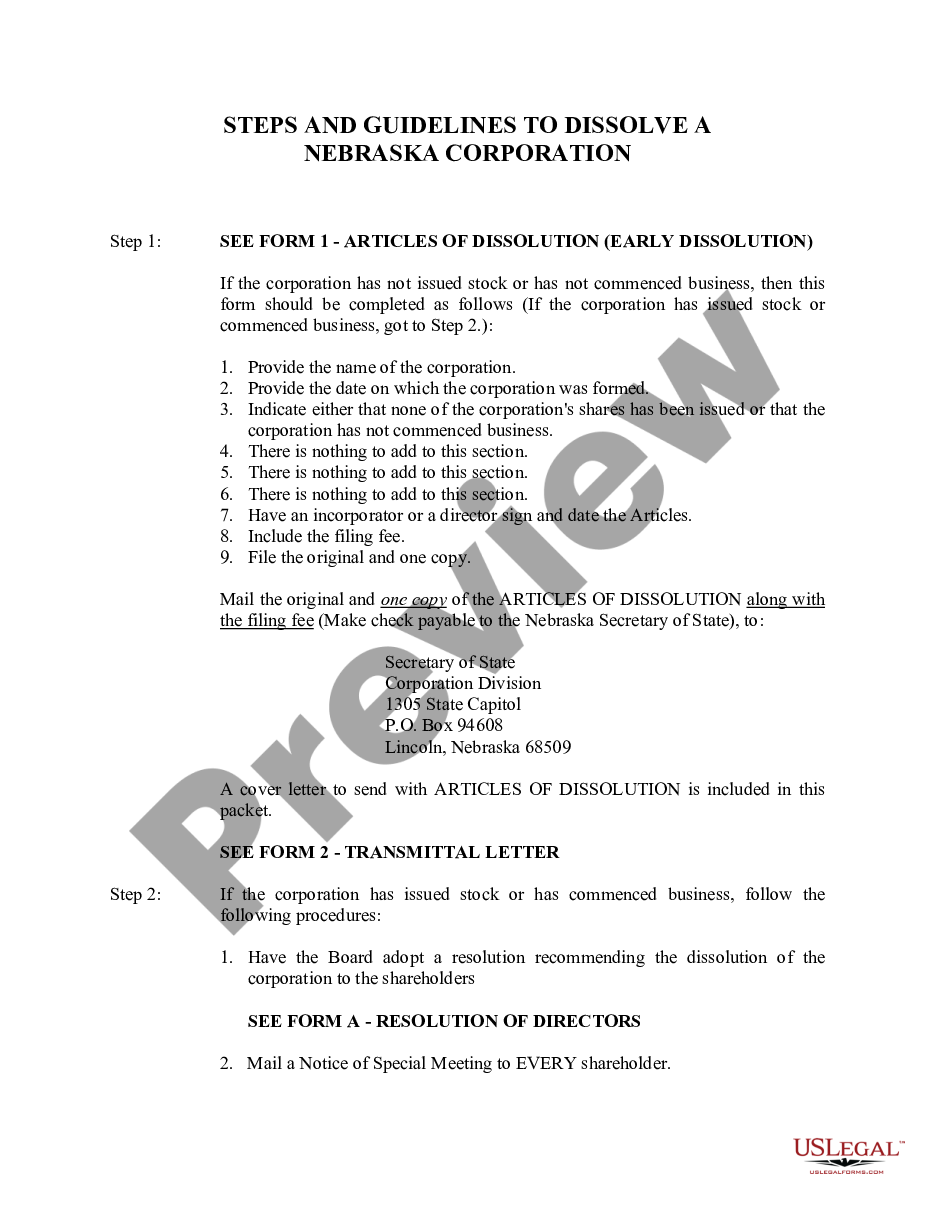 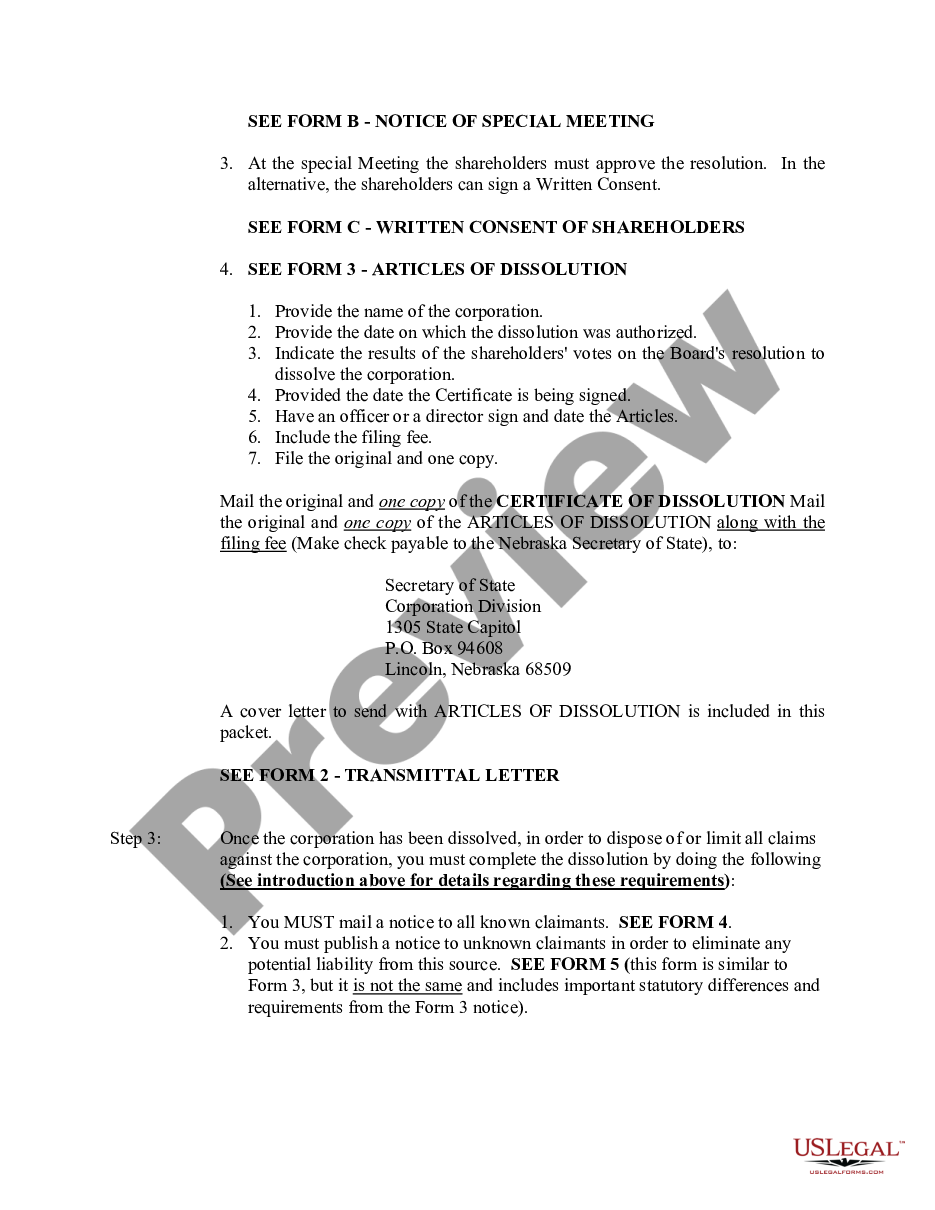 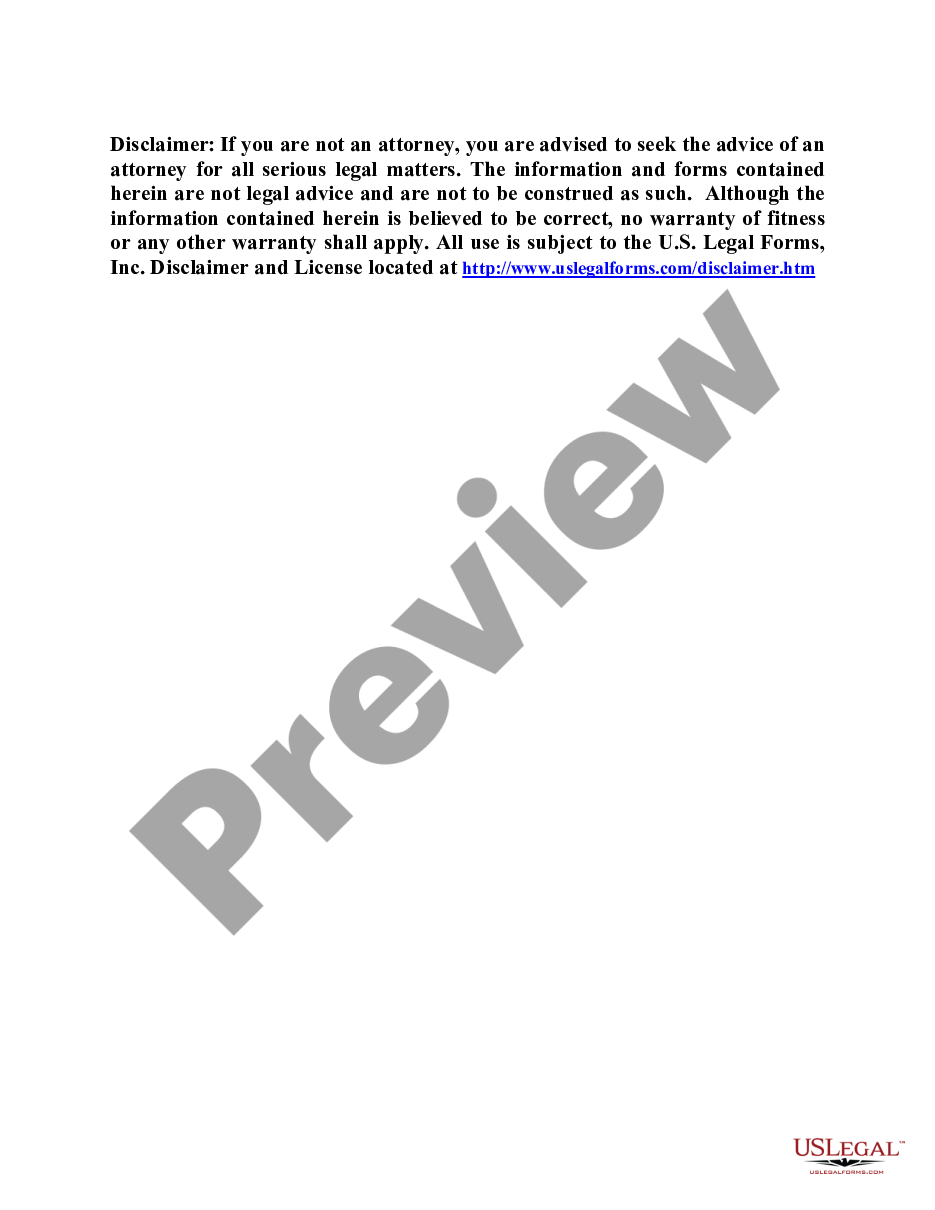 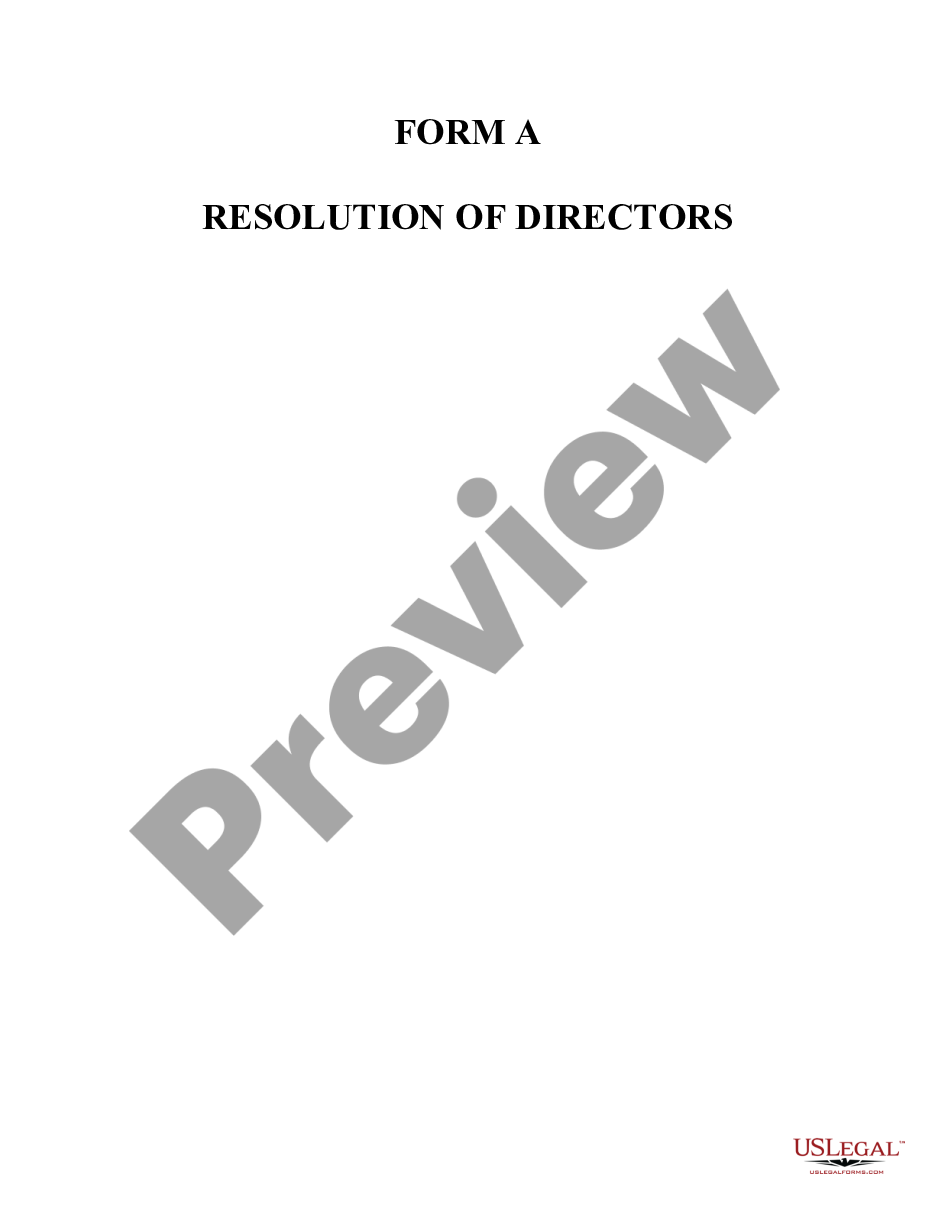 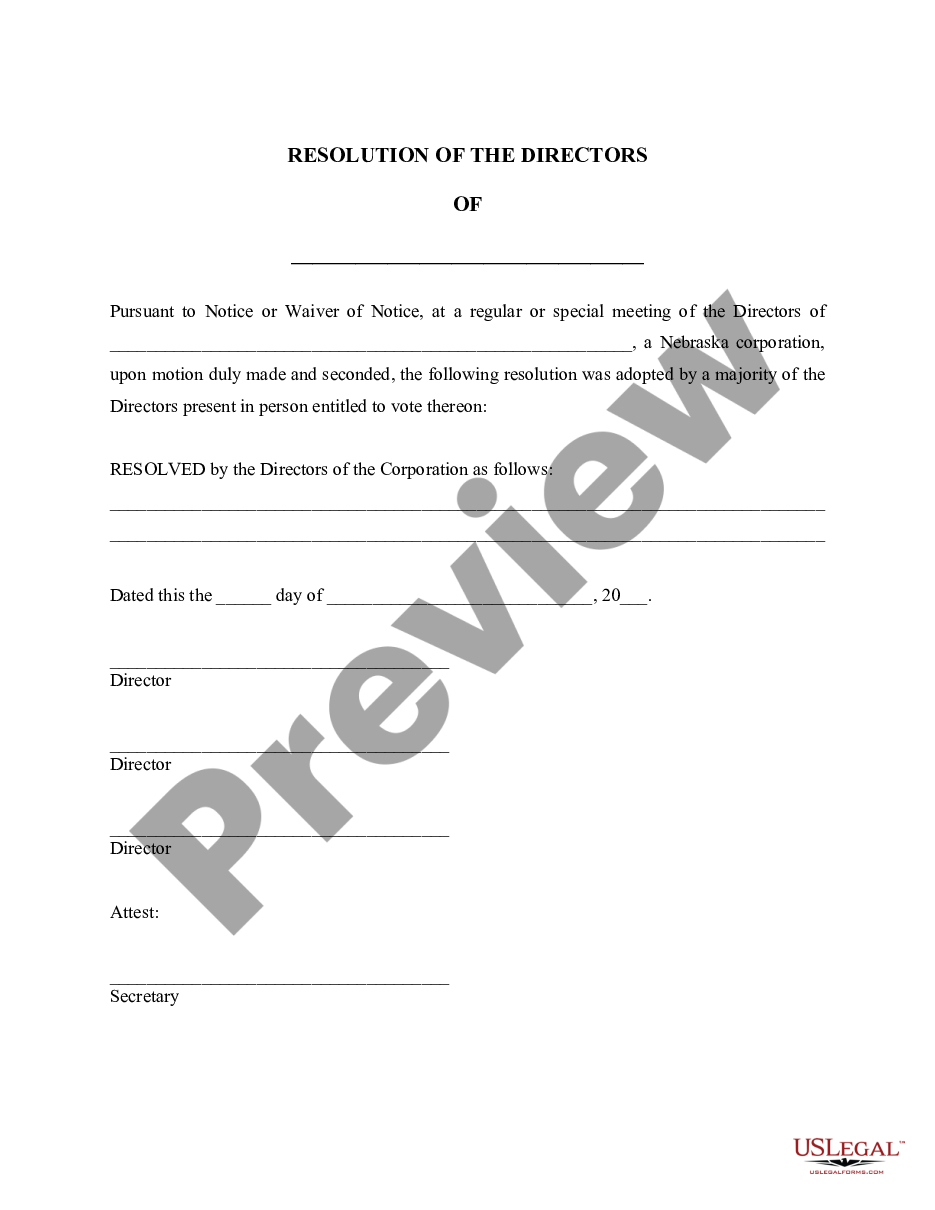 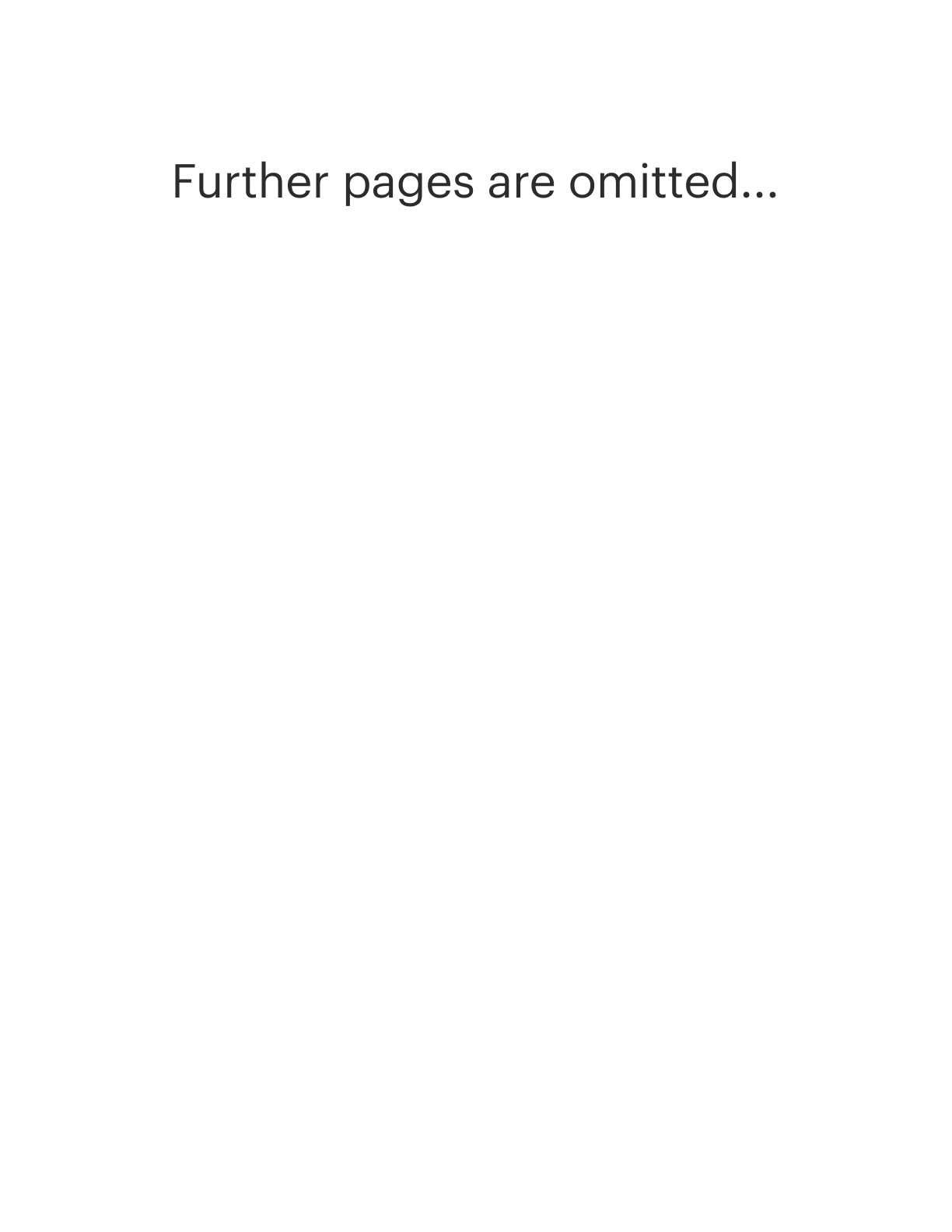 The dissolution of a corporation package contains all forms to dissolve a corporation in Nebraska, step by step instructions, addresses, transmittal letters, and other information.

How To Fill Out Dissolve Corporation Form?

Avoid costly attorneys and find the Nebraska Dissolution Package to Dissolve Corporation you need at a affordable price on the US Legal Forms website. Use our simple groups functionality to look for and download legal and tax documents. Go through their descriptions and preview them just before downloading. In addition, US Legal Forms provides customers with step-by-step instructions on how to download and complete every single form.

US Legal Forms clients merely need to log in and obtain the particular form they need to their My Forms tab. Those, who have not obtained a subscription yet should stick to the guidelines below:

Right after downloading, it is possible to fill out the Nebraska Dissolution Package to Dissolve Corporation manually or with the help of an editing software program. Print it out and reuse the template multiple times. Do more for less with US Legal Forms!

All forms provided by US Legal Forms, the nations leading legal forms publisher. When you need Nebraska Dissolution Corporation, don't accept anything less than the USlegal™ brand. "The Forms Professionals Trust ™

What happens if you do not dissolve a corporation?

What happens when a corporation is dissolved?

When a corporation is dissolved, it no longer legally exists and, in most cases, its debts disappear as well. State laws usually give additional time beyond the dissolution for creditors to file suits for failure to pay any corporate debts or for the wrongful distribution of corporate assets.

How do I dissolve an inactive corporation?

Dissolve the Legal Entity (LLC or Corporation) with the State. An LLC or Corporation needs to be officially dissolved. Pay Any Outstanding Bills. You need to satisfy any company debts before closing the business. Cancel Any Business Licenses or Permits. File Your Final Federal and State Tax Returns.

Can I use a bank account after dissolving a corporation?

After dissolution, you cannot use the funds remaining in your business bank account for new business. LLC members no longer have the authority to conduct business or do anything that would indicate that the LLC is still active. Your bank account can cover only essential winding up affairs.

Can the government dissolve a corporation?

Definition. The ending of a corporation, either voluntarily by filing a notice of dissolution with the Secretary of State or as ordered by a court after a vote of the shareholders, or involuntarily through government action as a result of failure to pay taxes.

What happens to assets when a corporation is dissolved?

After a company is dissolved, it must liquidate its assets. Liquidation refers to the process of sale or auction of the company's non-cash assets.Assets used as security for loans must be given to the bank or creditor that extended the loan, or you must pay off the loan before selling such assets.

Can a dissolved company still operate?

In legal terms, when a company is dissolved, it ceases to exist. It cannot still be trading - although a person may trade (misleadingly) using its name.

How do I dissolve a corporation in Nebraska?

Do I still owe money to a dissolved company?

There are three ways to dissolve a business corporation in the State of Nebraska: administratively, judicially, and voluntarily. This summary addresses only voluntary dissolution.

The corporation must notify each shareholder, whether or not entitled to vote, of the proposed shareholders' meeting in accordance with Â§ 21-2055. The notice must also state that the purpose or one of the purposes of the meeting is to consider dissolving the corporation.

A dissolved corporation continues its corporate existence but may not carry on any business, except that appropriate to wind up and liquidate its business and affairs, including: 1. Collecting its assets;
2. Disposing of its properties that will not be distributed in kind to its shareholders;
3. Discharging or making provision for discharging its liabilities;
4. Distributing its remaining property among its shareholders according to their interests; and
5. Doing every other act necessary to wind up and liquidate its business and affairs. Dissolution of a corporation does not: 1. Transfer title to the corporation's property;
2. Prevent transfer of its shares or securities, although the authorization to dissolve may provide for closing the corporation's share transfer records;
3. Subject its directors or officers to standards of conduct different from those prescribed in Â§Â§ 21-2078 to 21-20,115;
4. Change quorum or voting requirements for its board of directors or shareholders, change provisions for selection, resignation, or removal of its directors or officers or both, or change provisions for amending its bylaws;
5. Prevent commencement of a proceeding by or against the corporation in its corporate name;
6. Abate or suspend a proceeding pending by or against the corporation on the effective date of dissolution; or
7. Terminate the authority of the registered agent of the corporation. A dissolved corporation may dispose of the known claims against it by following the statutory procedures.