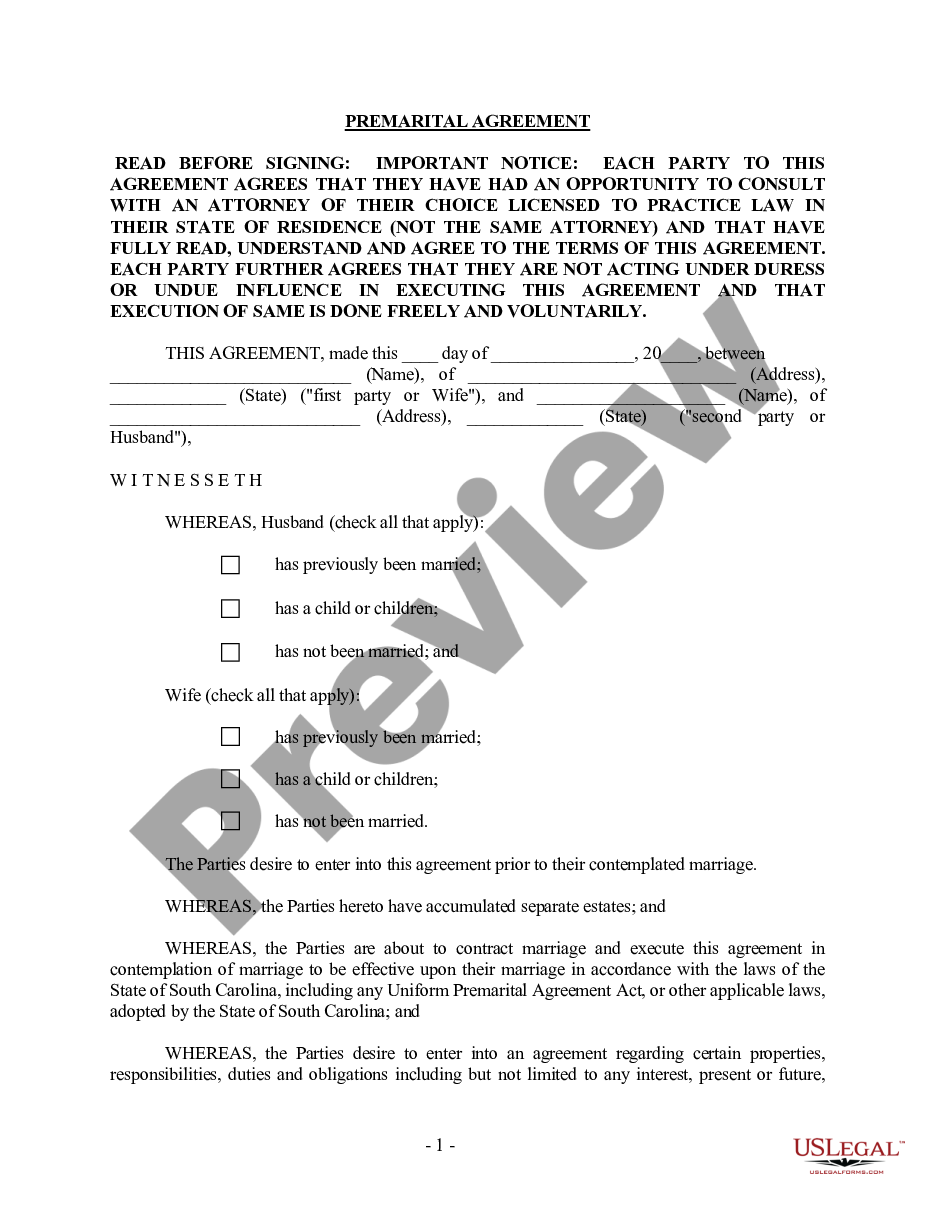 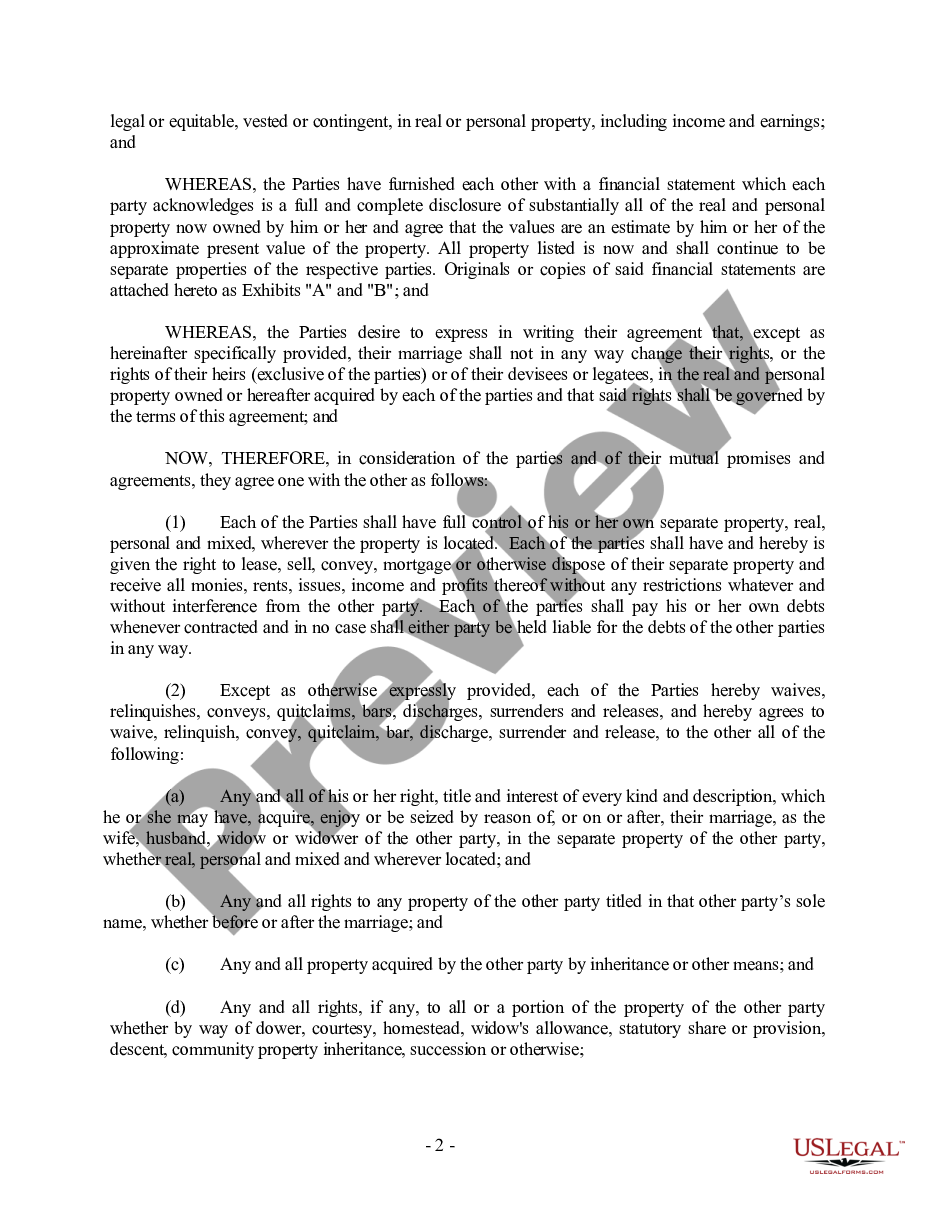 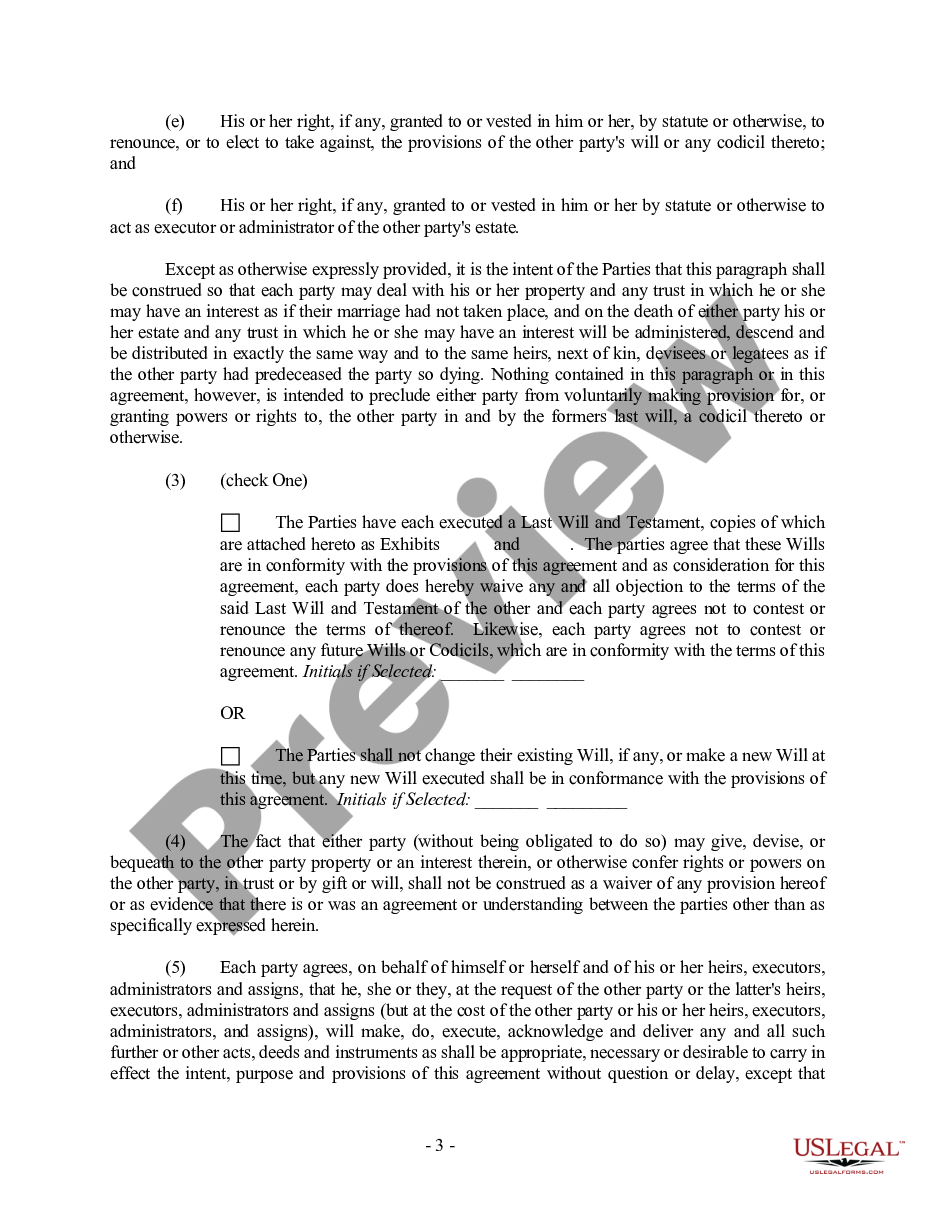 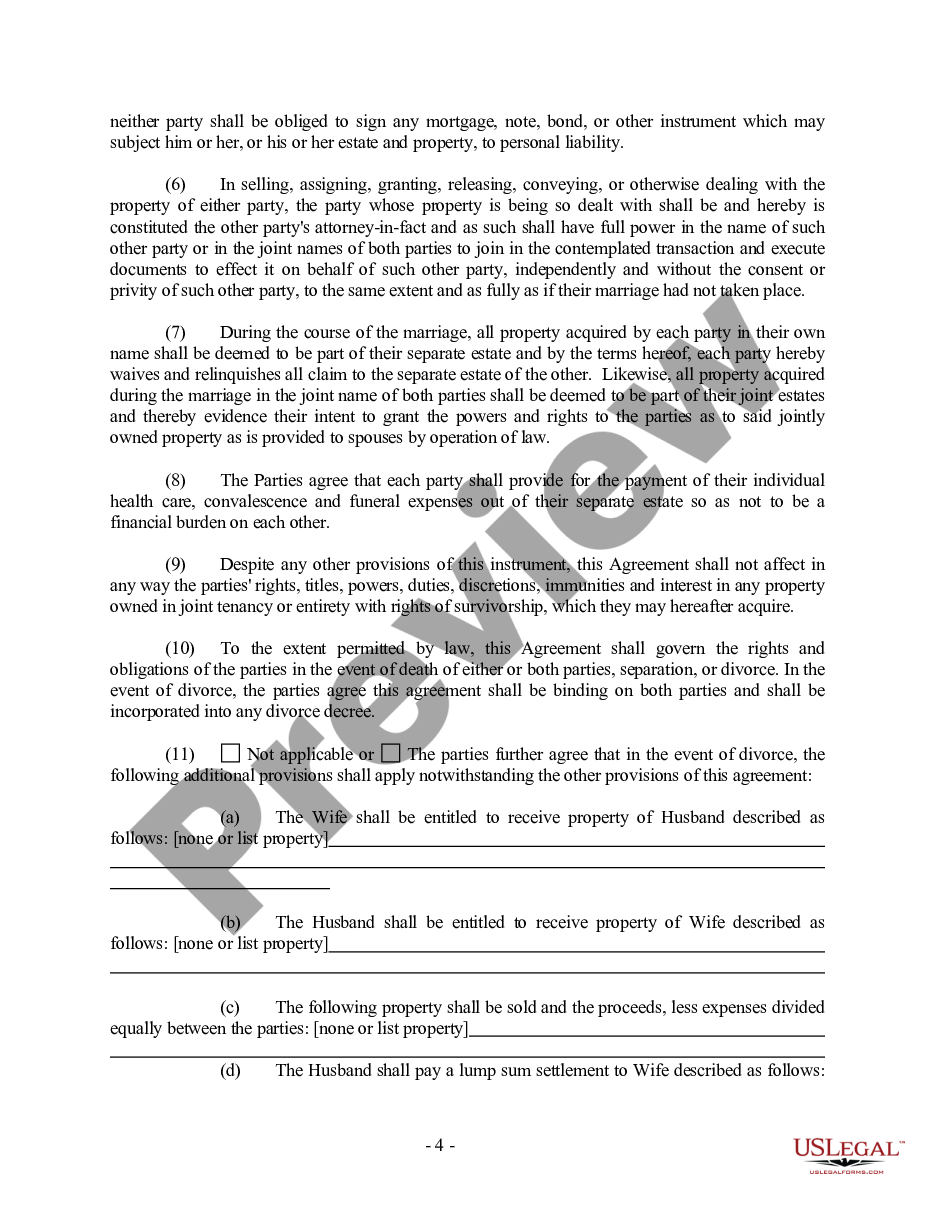 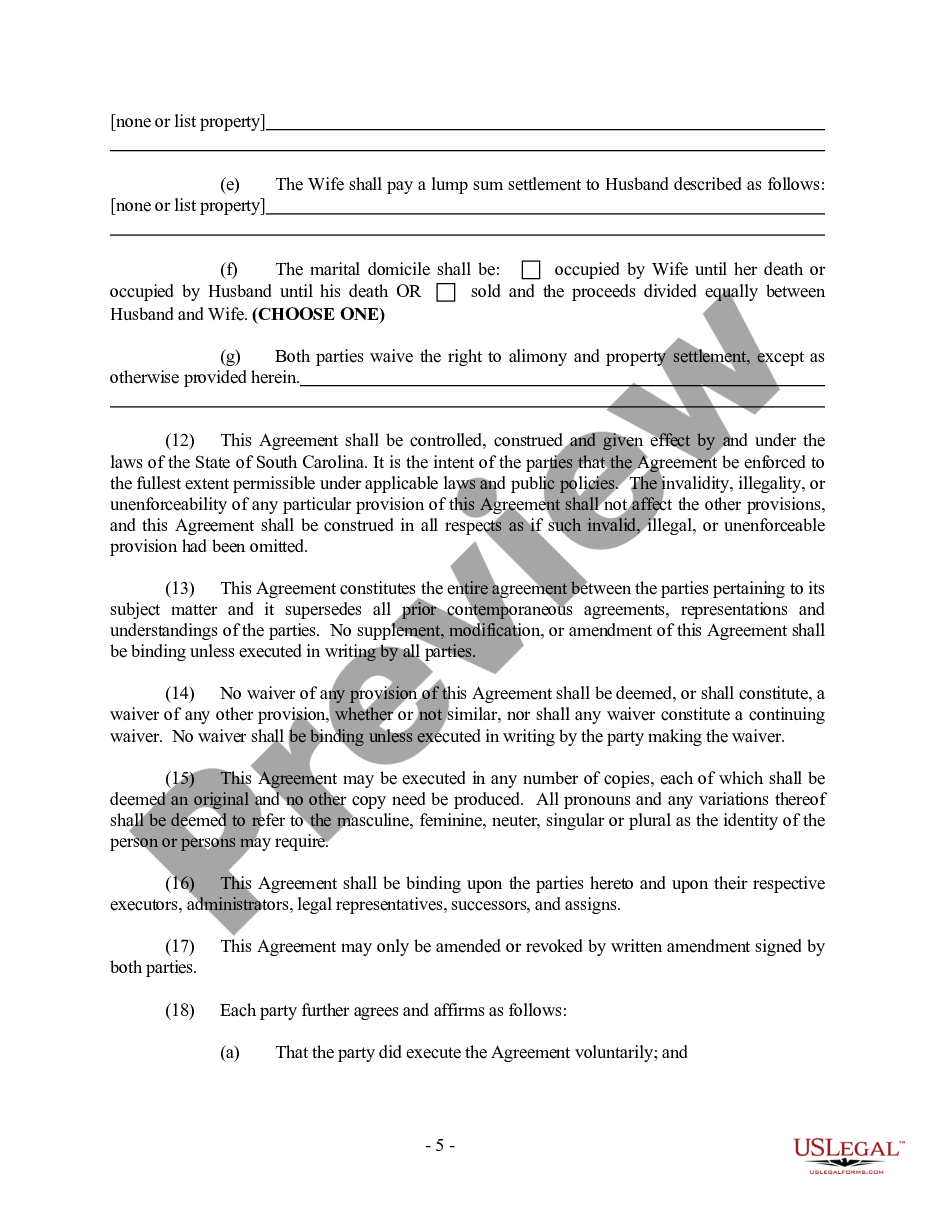 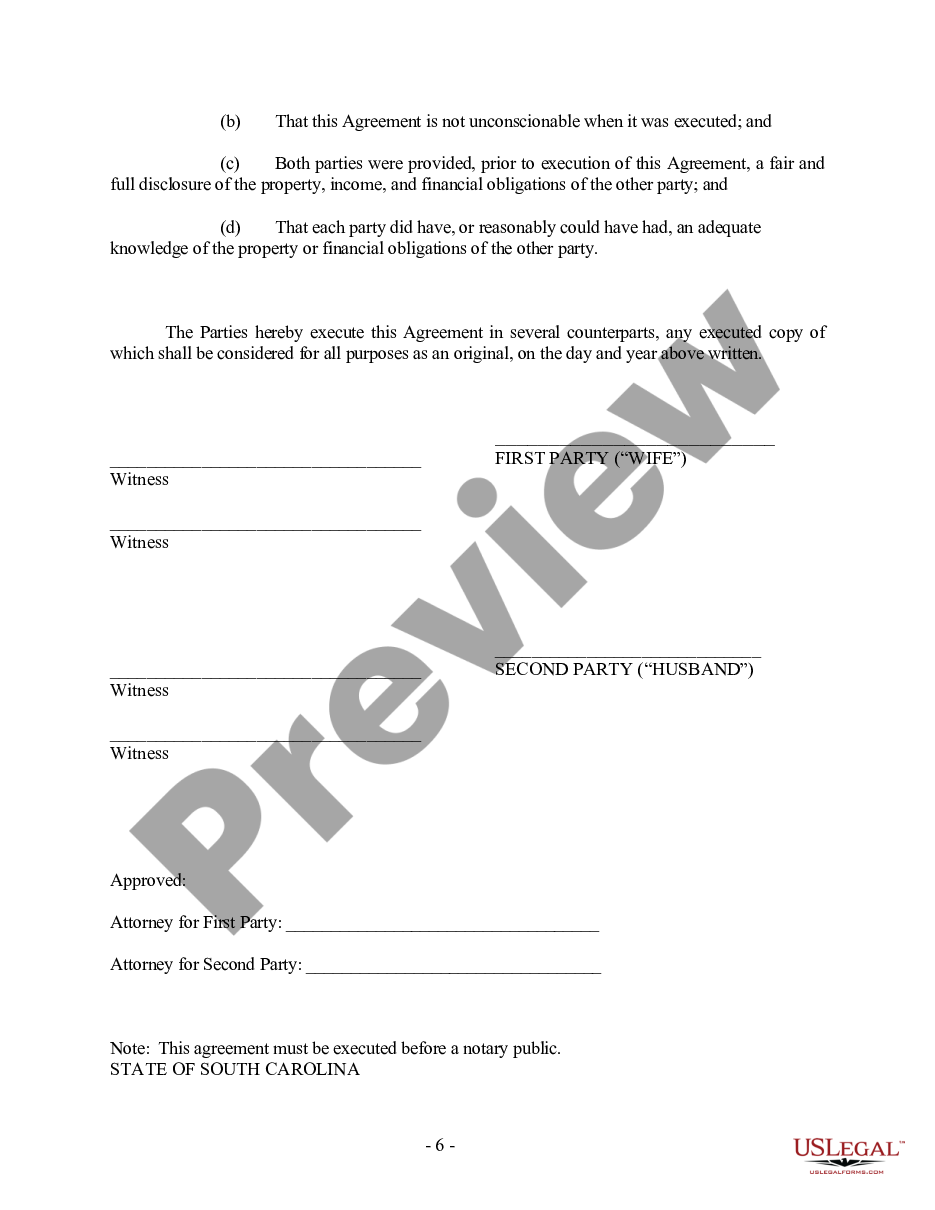 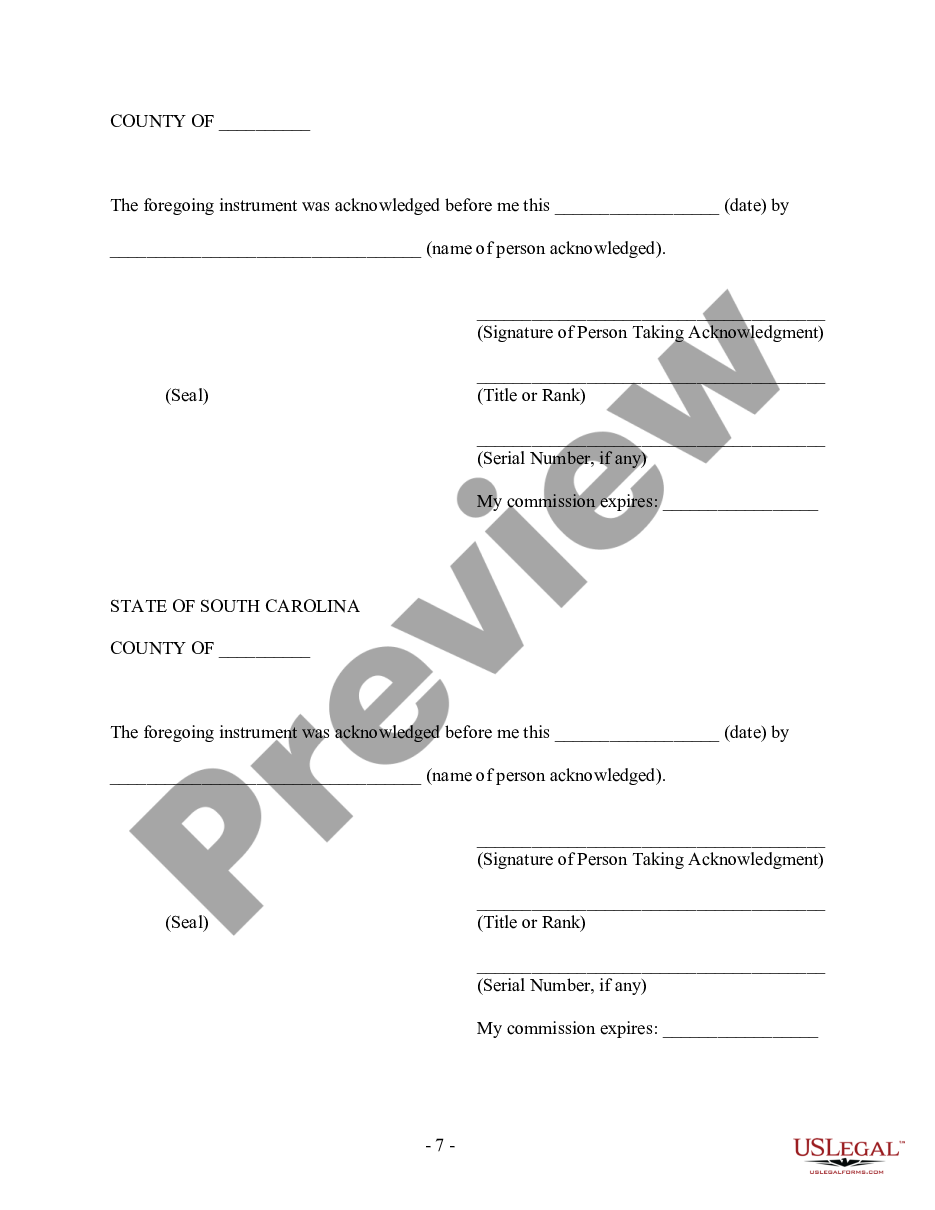 This form package contains a premarital agreement for your state. The agreement can be used by persons who have been previously married, or by persons who have never been married. It includes provisions regarding the contemplated marriage, assets and debts disclosure and property rights after the marriage. The agreement describes the rights, duties and obligations of prospective parties during and upon termination of marriage through death or divorce. These contracts are often used by individuals who want to ensure the proper and organized disposition of their assets in the event of death or divorce. Among the benefits that prenuptial agreements provide are avoidance of costly litigation, protection of family and/or business assets, protection against creditors and assurance that the marital property will be disposed of properly.

How To Fill Out South Carolina Prenuptial Premarital Agreement Without Financial Statements?

Creating documents isn't the most easy job, especially for those who rarely deal with legal papers. That's why we recommend utilizing correct South Carolina Prenuptial Premarital Agreement without Financial Statements templates made by professional attorneys. It allows you to prevent problems when in court or working with official organizations. Find the files you want on our website for high-quality forms and exact explanations.

If you’re a user with a US Legal Forms subscription, just log in your account. When you are in, the Download button will automatically appear on the template webpage. After getting the sample, it will be stored in the My Forms menu.

Customers with no an activated subscription can easily create an account. Follow this brief step-by-step help guide to get the South Carolina Prenuptial Premarital Agreement without Financial Statements:

Right after finishing these simple actions, it is possible to fill out the sample in your favorite editor. Check the completed information and consider requesting a lawyer to examine your South Carolina Prenuptial Premarital Agreement without Financial Statements for correctness. With US Legal Forms, everything becomes easier. Give it a try now!

All forms provided by US Legal Forms, the nations leading legal forms publisher. When you need Sc Prenuptial Agreement, don't accept anything less than the USlegal™ brand. "The Forms Professionals Trust ™

What is a prenup when getting married?

Premarital agreements (also called prenuptial agreements or "prenups") are a common legal step taken before marriage. A prenup establishes the property and financial rights of each spouse in the event of a divorce.

What happens when your spouse dies and you have a prenup?

However, a prenuptial agreement, or "prenup," can also have an impact on inheritance in the event of a spouse's death.Then, when the surviving spouse later dies, those assets will be passed on to his or her children, leaving the children of the first spouse out in the cold.

Do you get a prenup before or after marriage?

Despite the fact that a prenup is arranged before a marriage, you can still sign one after exchanging "I do's." This contract, known as a post-nuptial agreement, is drafted after marriage by those who are still married and either are contemplating separation or divorce or simply want to protect themselves from the ...

What does a prenup do in a marriage?

What is a prenup? A prenuptial agreement, commonly referred to as a prenup, is a written contract you and your spouse enter into before getting legally married. It details exactly what happens to finances and assets during your marriage and, of course, in the event of divorce.

Sometimes there are areas of law about which Uniform Acts are written and adopted by the various states. Premarital Agreements is such as area of law. The NATIONAL CONFERENCE OF COMMISSIONERS ON UNIFORM STATE LAWS adopted the final version of the Uniform Premarital Agreement Act in 1983. Since that date, the act, as modified by the various states, has been adopted in the following states: Arizona, Arkansas, California, Connecticut, Delaware, District of Columbia, Hawaii, Idaho, Illinois, Indiana, Iowa, Kansas, Maine, Montana, Nebraska, Nevada, New Jersey, New Mexico, North Carolina, North Dakota, Oregon, Rhode Island, South Dakota, Texas, Utah and Virginia. At the heart of the act is the provision which provides that such an agreement is generally valid if it is in writing and sets forth the factors to consider if the agreement is challenged. If your state has not adopted the Uniform Act, case law generally controls enforceability of the agreement.