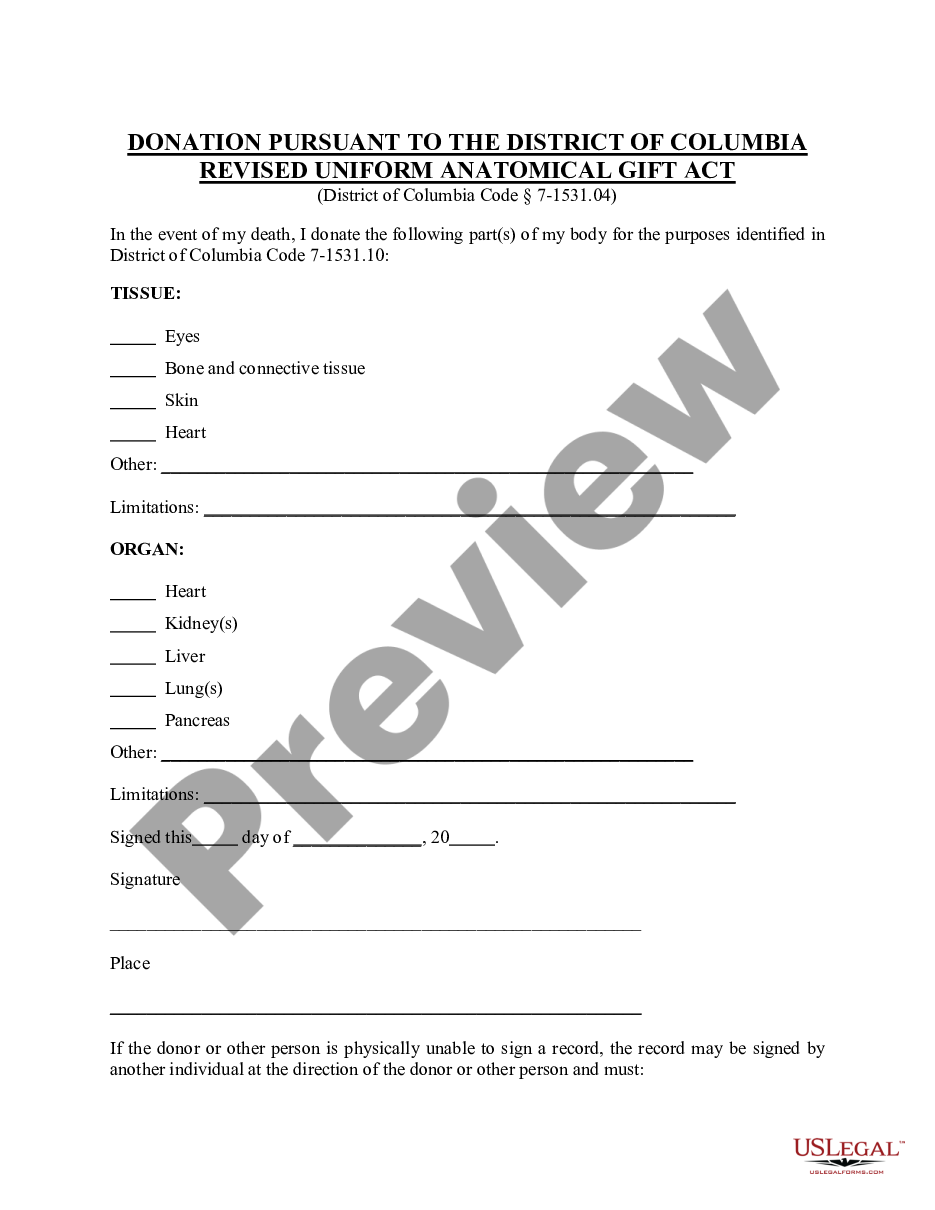 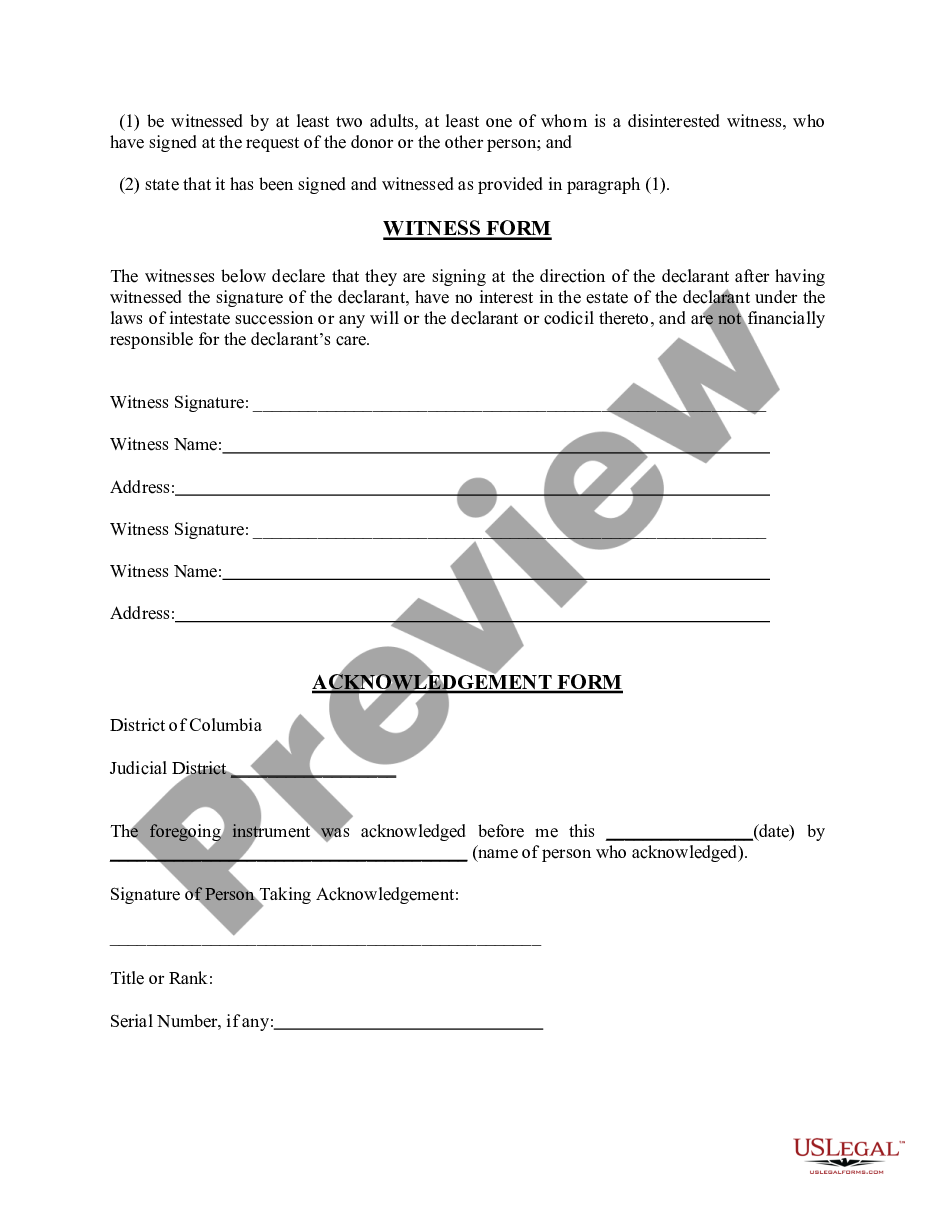 This Revised Uniform Anatomical Gift Act Donation form pursuant to state statutes designates the specific body parts and organs an individual wishes to donate at the time of death.

An individual who is at least 18 years of age may make an anatomical gift by a signed document of gift. This form must be witnessed and the signature notarized.

How To Fill Out District Of Columbia Revised Uniform Anatomical Gift Act Donation?

The greater number of documents you should create - the more nervous you are. You can get a huge number of District of Columbia Revised Uniform Anatomical Gift Act Donation templates on the internet, however, you don't know which of them to rely on. Remove the hassle to make getting exemplars easier employing US Legal Forms. Get expertly drafted documents that are composed to meet state demands.

If you have a US Legal Forms subscription, log in to your account, and you'll see the Download key on the District of Columbia Revised Uniform Anatomical Gift Act Donation’s web page.

If you have never used our service before, complete the registration procedure using these instructions:

Find each sample you get in the My Forms menu. Simply go there to prepare fresh duplicate of your District of Columbia Revised Uniform Anatomical Gift Act Donation. Even when having expertly drafted web templates, it is nevertheless vital that you think about asking your local lawyer to twice-check completed form to ensure that your document is accurately filled out. Do more for less with US Legal Forms!

Is a 24 a good ACT score? Yes, a score of 24 is a good score. It places you in the top 73rd percentile nationally out of the 2 million test takers of the ACT entrance exam. The score indicates you've done an above above average job answering the questions on the English, Math, Reading and Science sections of the test.

Nationally, What's a Bad ACT Score? If you look at the ACT percentiles, any composite score below 20 (the 50th percentile) is below average. (For more on how the ACT is scored and how the composite is calculated, see our guide.) In other words, to be above average nationally, you need at least a 21 ACT composite score.

Can you get scholarships with a 24 on the ACT?

What is a good ACT score for a junior?

With a 12 ACT score, you're already strongly competitive for these schools. You're very likely to get admitted if you apply. If you improve your ACT score, your Safety Schools will get better and better.

Should I take the SAT or ACT?

What is a good ACT score for a junior?

The average ACT score is 20.8. This is the composite score, which combines all four sections: English, reading, math, and science. So if you earn a composite score of 21, you're right in the middle of the pack. Generally, a score of 24 or higher is good.

Is a 17 a good ACT score? A score of 17 is pretty low. It places you in the bottom 31st percentile nationally out of the 2 million test takers of the ACT entrance exam. The score indicates you've done a well below average job answering the questions on the English, Math, Reading and Science sections of the test.

What percentage is a 24 on the ACT?


STATUTORY REFERENCE
ALL REFERENCES ARE TO THE DISTRICT OF COLUMBIA CODE

(a) A donor may make an anatomical gift:

(1) By authorizing a statement or symbol indicating that the donor has made an anatomical gift to be imprinted on the donor's driver's license or identification card;

(3) During a terminal illness or injury of the donor, by any form of communication addressed to at least 2 adults, at least one of whom is a disinterested witness; or

(4) As provided in subsection (b) of this section.

(1) Be witnessed by at least 2 adults, at least one of whom is a disinterested witness, who have signed at the request of the donor or the other person; and

(2) State that it has been signed and witnessed as provided in paragraph (1) of this subsection.

(c) Revocation, suspension, expiration, or cancellation of a driver's license or identification card upon which an anatomical gift is indicated does not invalidate the gift.