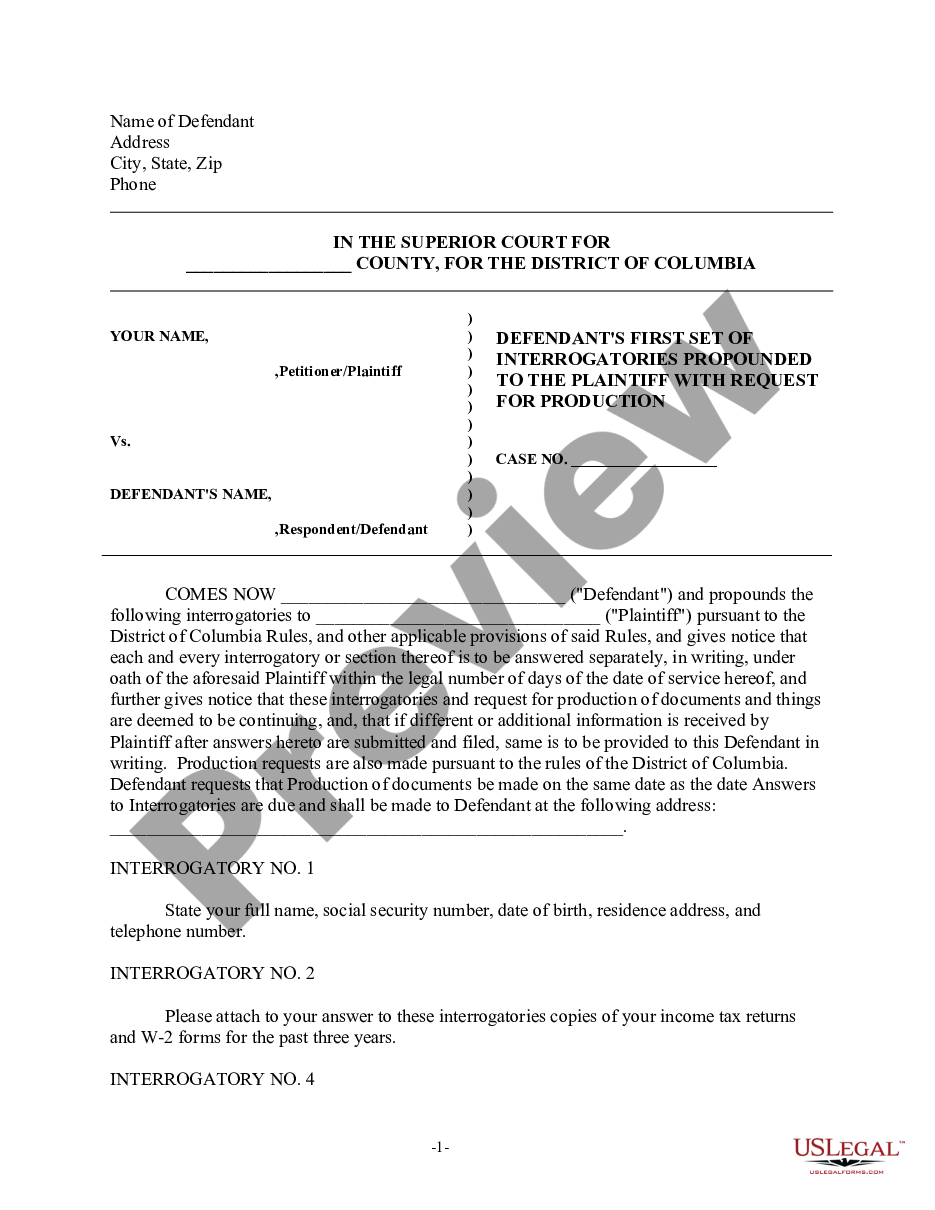 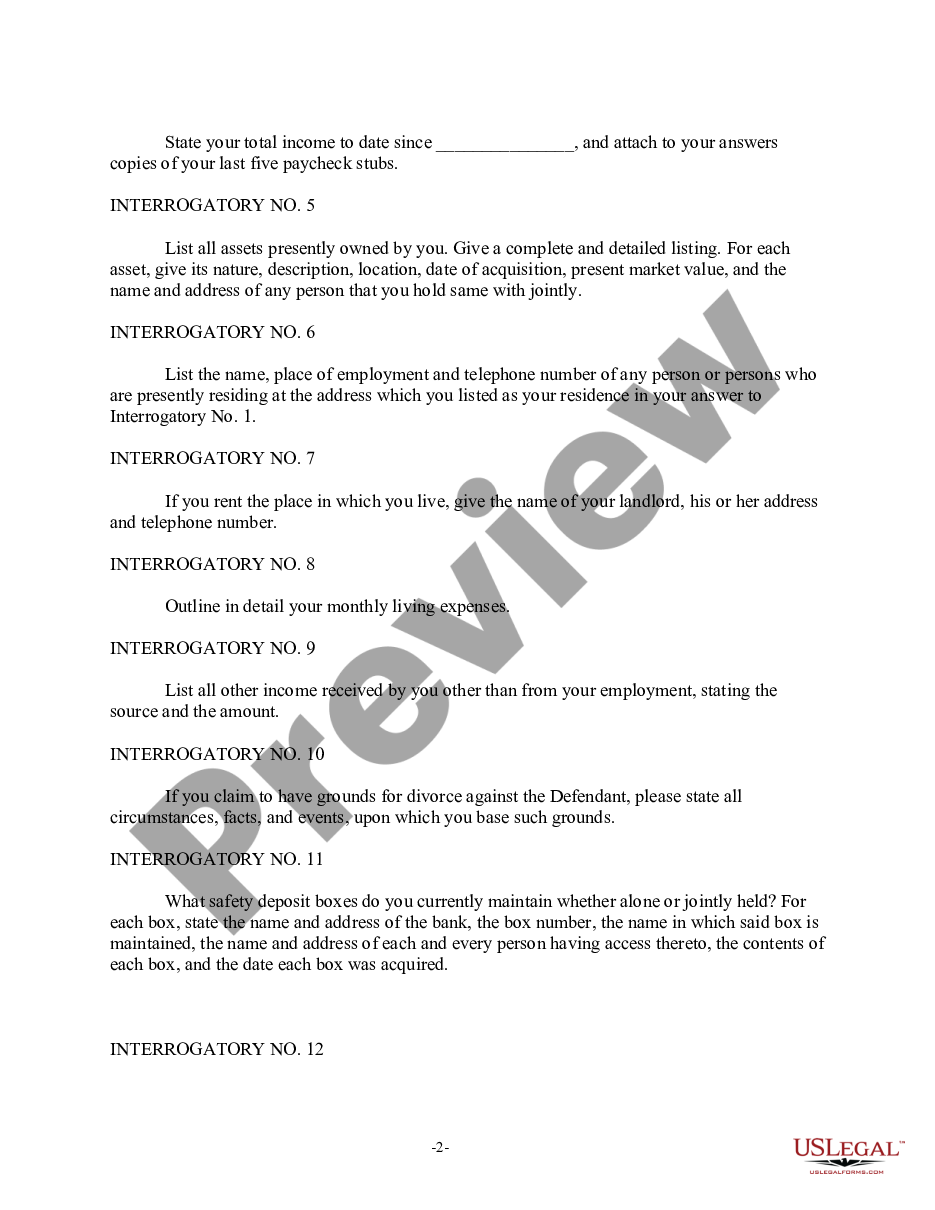 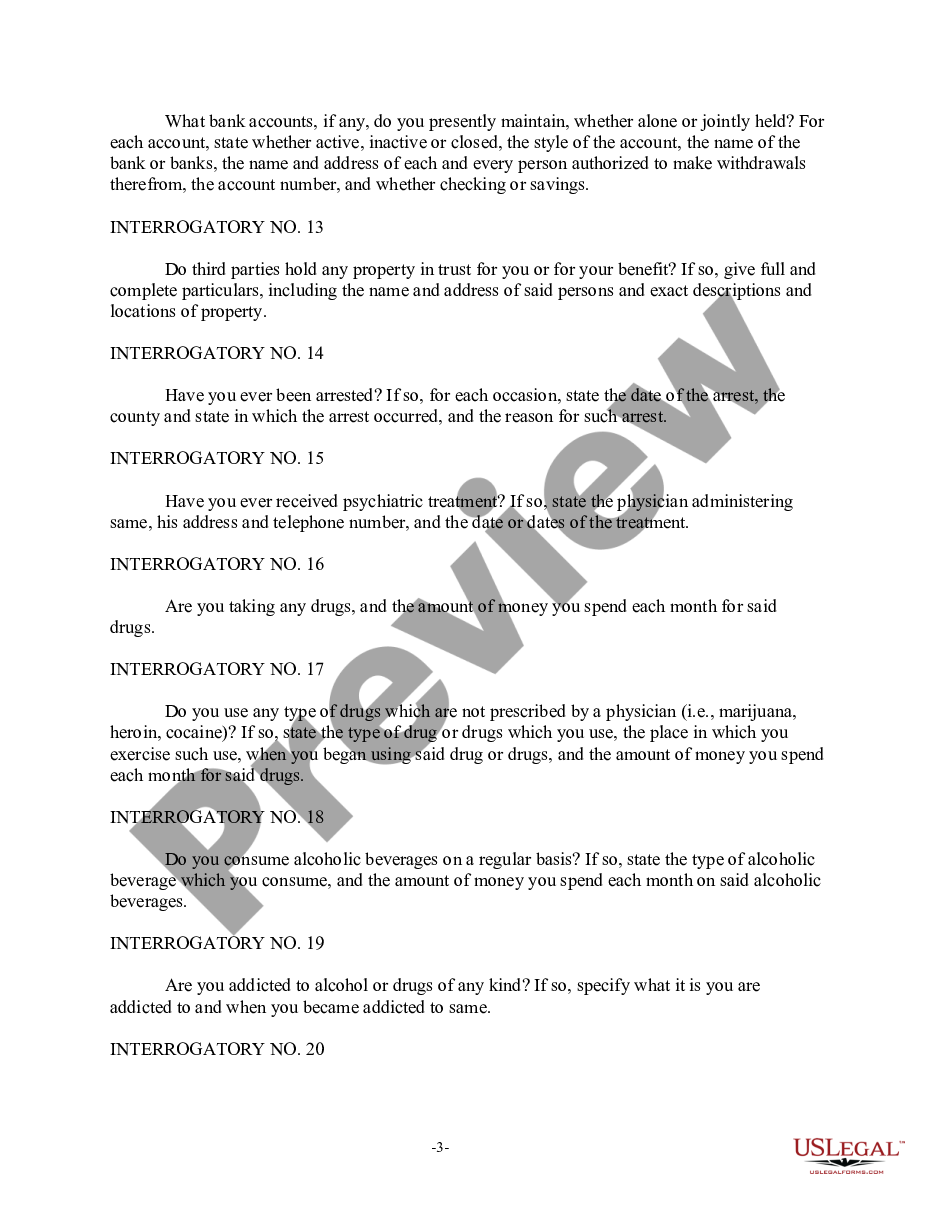 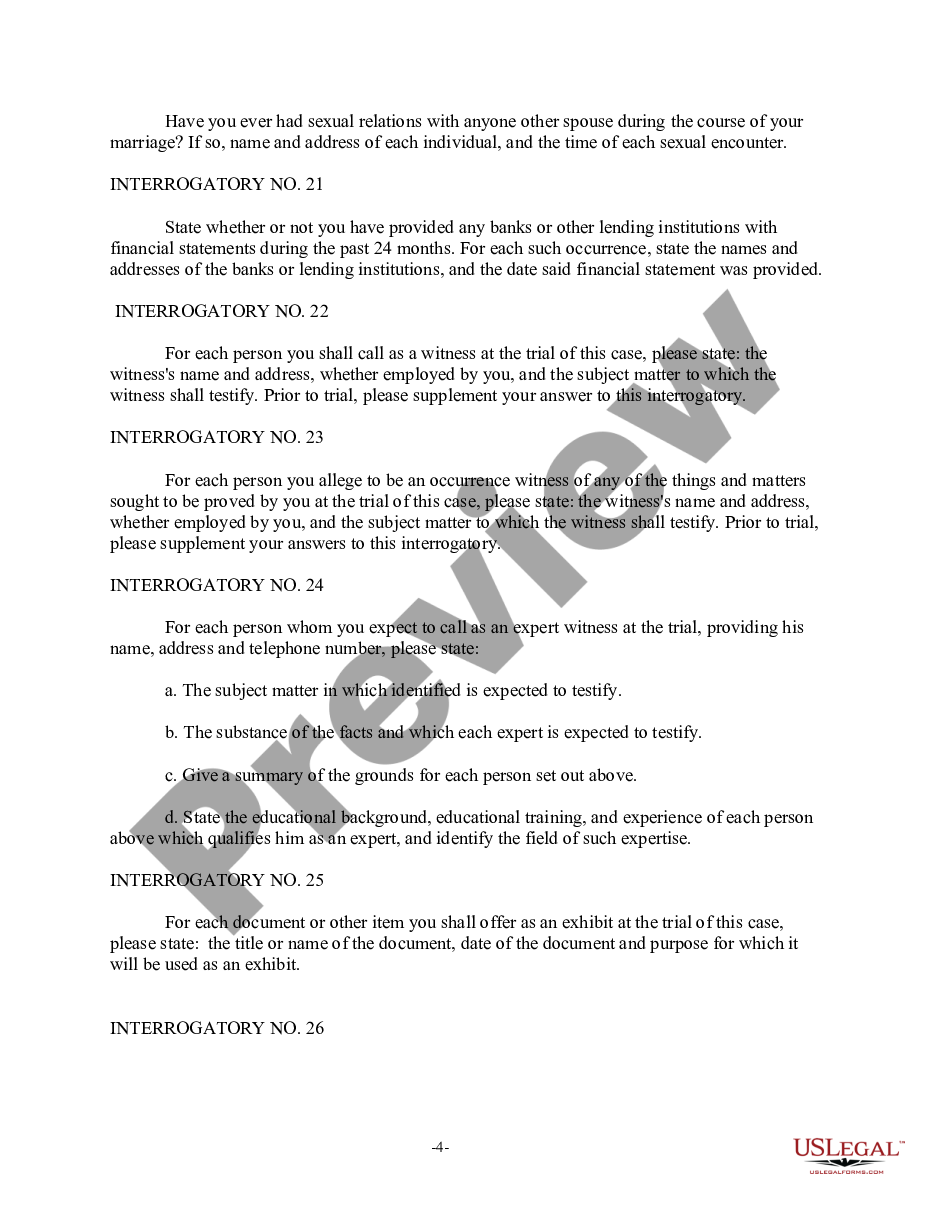 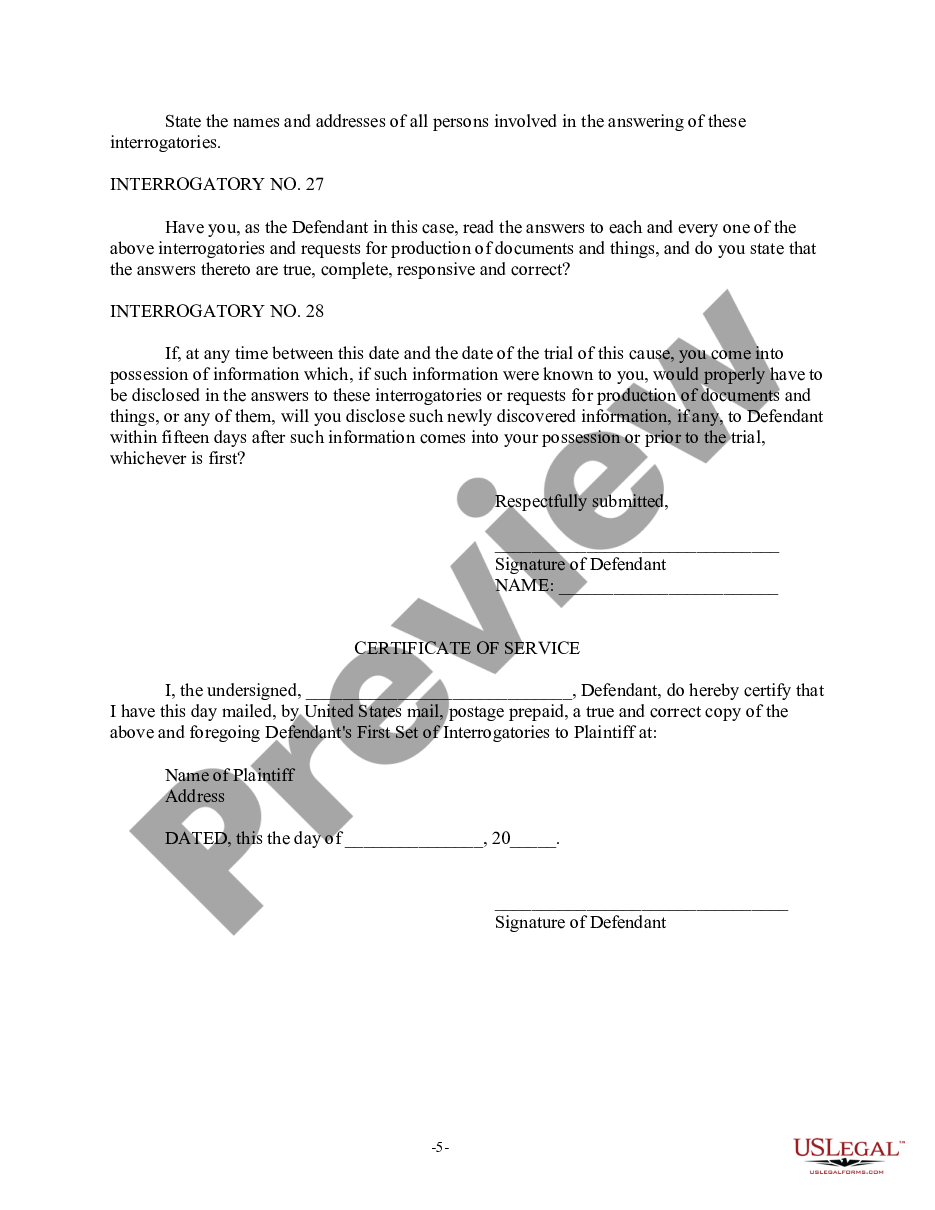 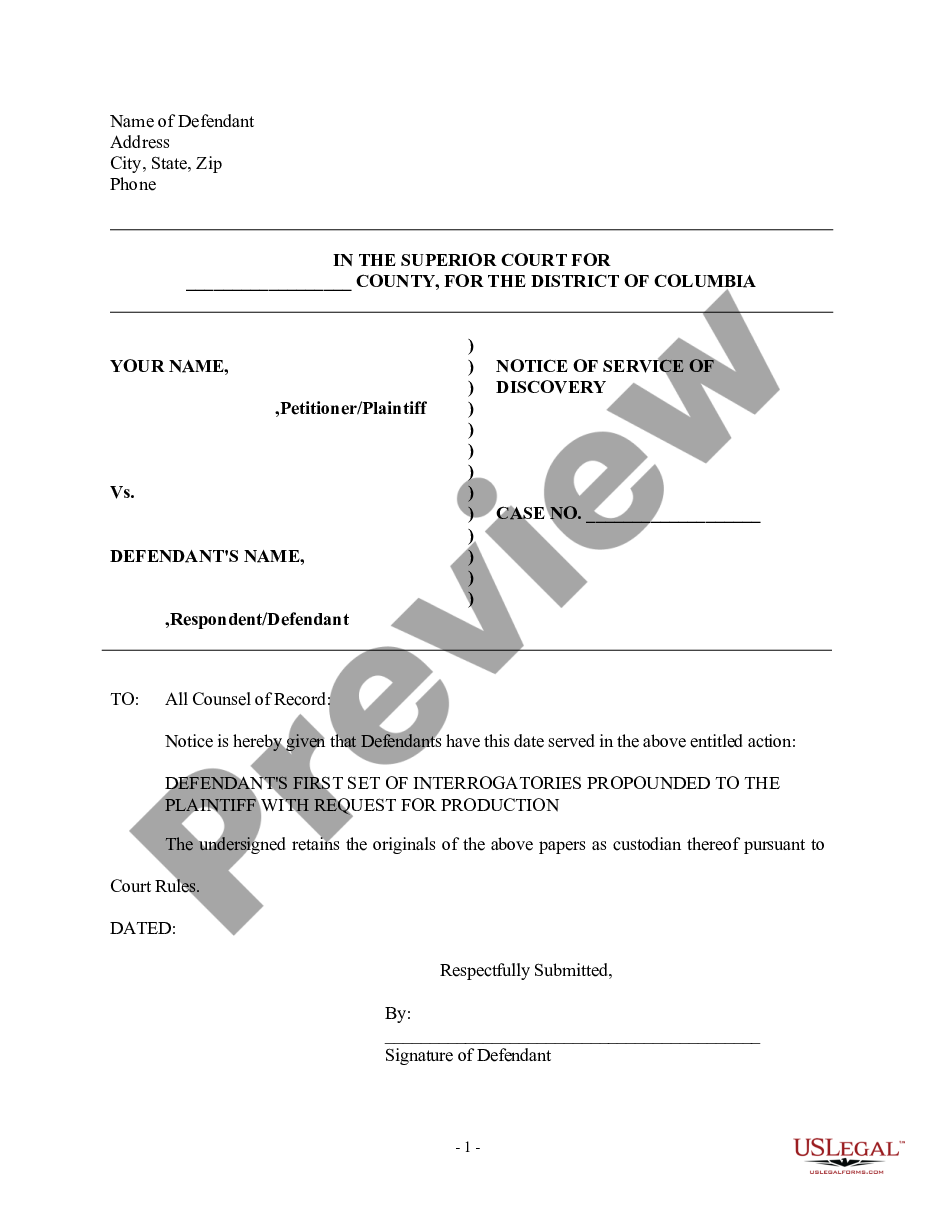 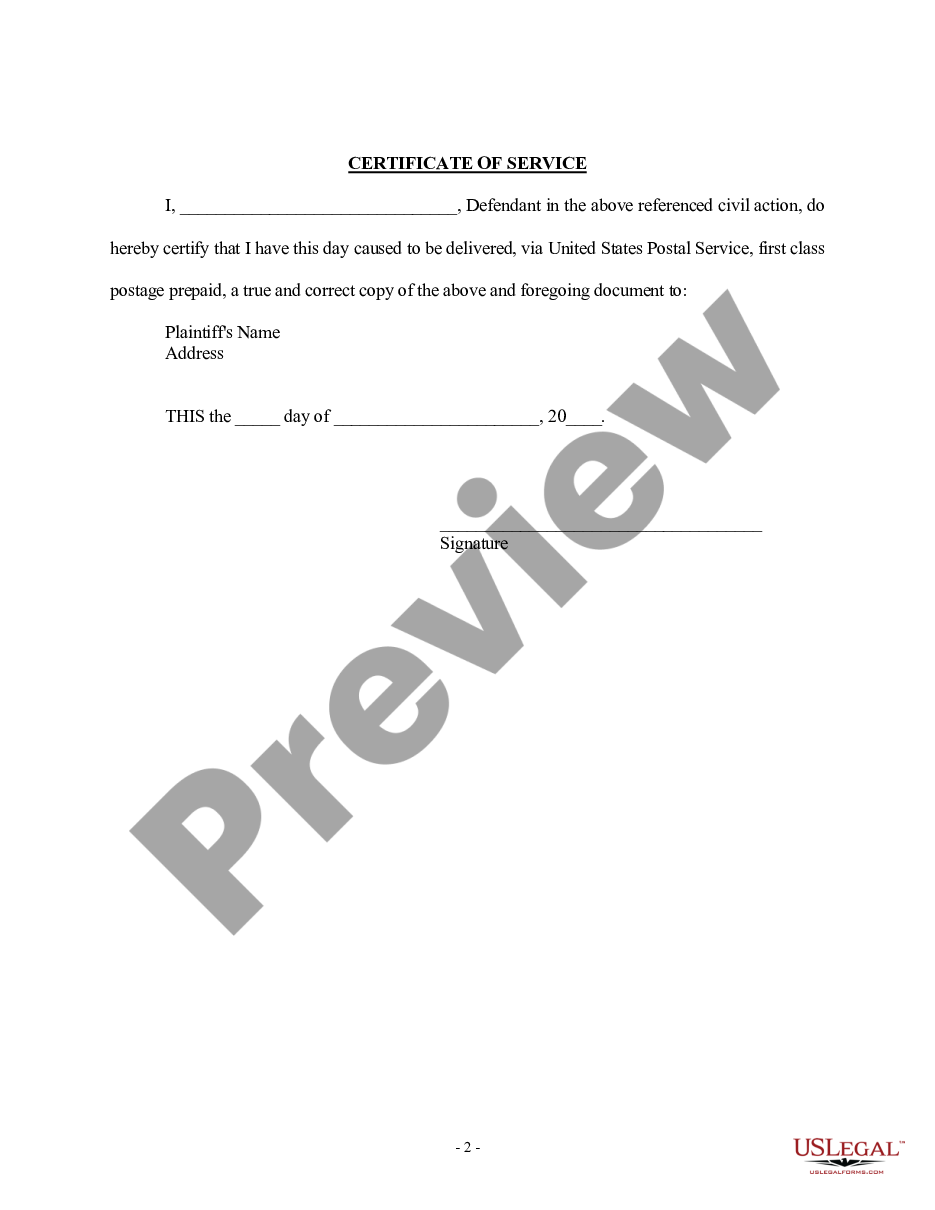 This Discovery Interrogatories from Defendant to Plaintiff with Production Requests is a sample of interrogatories for the Defendant in a Divorce action to ask the Plaintiff. It also includes request for production of documents. You should only use this form as a guide and delete questions not relevant to your case, as well as add questions you or your client wants to ask the Plaintiff based upon the facts of your case. It also includes the separate Notice of Filing of Discovery to be filed with the Court Clerk.

How To Fill Out District Of Columbia Discovery Interrogatories From Defendant To Plaintiff With Production Requests?

The more papers you should create - the more anxious you feel. You can get thousands of District of Columbia Discovery Interrogatories from Defendant to Plaintiff with Production Requests blanks online, still, you don't know which of them to trust. Eliminate the headache and make detecting samples far more convenient employing US Legal Forms. Get professionally drafted documents that are written to meet state specifications.

If you currently have a US Legal Forms subscribing, log in to your profile, and you'll find the Download option on the District of Columbia Discovery Interrogatories from Defendant to Plaintiff with Production Requests’s page.

If you’ve never used our service before, complete the sign up process with the following guidelines:

Access every document you get in the My Forms menu. Simply go there to prepare new version of your District of Columbia Discovery Interrogatories from Defendant to Plaintiff with Production Requests. Even when using properly drafted templates, it’s nevertheless essential that you think about asking the local attorney to double-check filled in form to ensure that your record is accurately filled out. Do more for less with US Legal Forms!

What happens if the defendant does not respond to interrogatories?

How do you respond to request for production of documents?

What are interrogatories and request for production?

Interrogatories Interrogatories are written questions that are sent by one party to another.Requests for production are the means by which you can ask the other party to make copies of documents, photographs, records, etc. and to request the inspection of property.

Can you refuse to answer interrogatories?

So, can you refuse to answer interrogatories? The answer is, no, you may not. You must answer a Rule 33 interrogatory within 30 days of being served with it. That answer must either permit inspection of the requested information or object to the production of the information for a specific reason.

Does a defendant have to answer interrogatories?

What happens if you dont answer discovery?

Are interrogatories part of discovery?

Interrogatories are a part of the "discovery" stage of a civil case.During discovery, the parties request and exchange information and documents. Interrogatories and depositions form the bulk of the discovery process. Unlike many legal documents, interrogatories do not need to be filed with the court.

What is the difference between interrogatories and request for production?

How do you respond to interrogatories?

Responding to Form InterrogatoriesAnswer each question, being careful to answer each subpart, if one exists. Read the question carefully, and answer only what it asks. You may attach exhibits, if necessary. The response must be verified, meaning you must swear that the responses given are true.

Discovery Interrogatories from Defendant to Plaintiff with Production Requests

Note: This summary is not intended to be an all-inclusive summary of discovery law in the District of Columbia, but does include basic and other information.

Definitions Discovery: A procedure designed to allow disclosure of information between Plaintiffs and Defendants. Written questions, oral questioning, document production and admissions requests are generally allowed. Discovery was designed to to prevent trial by ambush.

Interrogatories: Written questions from Plaintiff to Defendant, or from Defendant to Plaintiff. The questions are mailed to the Plaintiff, Defendant or the attorney for response in writing. The answers or responses are usually due between 20-30 days.

Deposition: A procedure where verbal questions are asked a Plaintiff or Defendant for immediate response. Depositions are usually recorded by a court reporter, who swears the person to tell the truth before questioning begins.

Production of Documents: The method of obtaining documents from the other party relevant to the case such as all documents a party intends to introduce at trial.

Requests for Admissions: Written questions where you request the other party to admit or deny some relevant fact.

Objections: Objections may be made to all discovery questions if the questions are not relevant, or likely to lead to the discovery of relevant evidence.

Civil Procedure Rules: Virtually all states have adopted a version of civil procedure rules which include rules dealing with discovery.

When Depositions May Be Taken: Any party is allowed to take the testimony of any person by deposition upon oral examination or written interrogatories for the purpose of discovery or for use as evidence in the acton or for both purposes. Rule 26(a)

Scope of Examination: Unless otherwise ordered by the court, the deponent may be examined regarding any matter, not subject to privilege, which is relevant to the subject matter of the pending action. Rule 26(b)

In a foreign country, depositions may be taken on notice before a person authorized to administer oaths in the place where the examination is held, or before a person commissioned by the court, or pursuant to a letter rogatory. Rule 28(b)

Stipulations: If the parties so stipulate in writing, depositions may be taken before any person,at any time, or place, upon any notice, and in any manner. Rule 29

Any party may serve upon any adverse party written interrogatories. Interrogatories may be served after commencement of an action and without leave of the court, except that, if service is made by the plaintiff within ten days after such commencement, leave of court granted with or without notice must be obtained. Interrogatories must be answered separately and fully in writing and under oath.

The number of interrogatories to be served is not limited except as justice requires to protect the party from annoyance, expense, embarrassment, or oppression. Rule 33

Upon motion of any party showing good cause and upon notice to all other parties, the court, in which an action is pending, may order any party to produce and permit the inspection and copying or photographing of any designated documents, papers, books, accounts, letters, photographs, objects, or tangible things which are not privileged and within that particular party's possession, custody, or control. Rule 34

Physical and Mental Examinations of Persons

If the mental or physical condition of a party is in controversy, the court may order that party ot submit to a physical or mental examination by a physician. Rule 35

After commencement of an action a party may serve upon any other party a written request for the admission by the latter of the genuineness of any relevant documents described in and exhibited with the request, or of the truth of any relevant matters of fact set forth in the request. Rule 36

If a party refuses to answer any questions upon oral examination, the affected persons may apply for an order compelling an answer. Rule 37